The state Board of Education meeting on Thursday, Nov. 14. Members are considering Erie's proposal for a new community college.

Erie’s campaign to build a community college met disappointment Thursday morning after the state Board of Education voted against taking final action on Erie’s proposal.

By a vote of 8 to 6, board members delayed final action and instead approved a motion to hold an evidentiary meeting in Erie within the next six months.

“It’s a travesty, what just occurred,” said Kathy Dahlkemper, Erie County’s executive. “You know, this community has come together. We have proven all the points … to the levels we were supposed to reach in terms of the state law.”

She said the action shows “complete disregard for the Erie community, who has come down here en masse to support moving forward.”

State Rep. Curt Sonney, an Erie County Republican, is one of the state Board of Education members who voted in favor of a delay.

“There was clearly questions from the board, other board members. And I agreed that holding a public hearing would answer those questions,” Sonney said.

Sonney said he has concerns about the long-term costs of a community college in Erie County and whether the community college is sustainable in the long term. The plan calls for a combination of revenue from student tuition, the Erie Community Foundation, unrestricted gaming revenue and state funds.

Sonney said a better fit for Erie County would be a partnership with the Northern Pennsylvania Regional College, which describes itself as neither a traditional campus-based college nor an online college.

“I think that we could do more for the potential students in Erie County in a partnership than we can by providing a standalone institution,” said Sonney, who is chairman of the House Education Committee.

The Northern Pennsylvania Regional College offers classes in multiple locations that are “brought together via live interactive video technology,” according to its website. Erie Community college boosters say the region needs its own standalone institution to be on an equal footing with the state’s other high-population communities.

Ron DiNicola, an attorney and one of the backers of the effort, said the Northern Pennsylvania Regional College model works well in some parts of the state “but not in an industrial center like Erie with it’s mixed population of both rural and urban folks who are training for new jobs, single moms who are trying to get a certification.”

“They need the traditional instruction method, and they need a greater variety of courses and other opportunities,” DiNicola said after a meeting state Board of Education committee meeting last month.

State Board of Education members provided few details on how the upcoming hearing. DiNicola said he’s confident the community college supporters can answer any questions that board members have.

“I’m confident we’ll be able to address them effectively, and we’ll hopefully stay on course,” he said.

DiNicola said he and other community college supporters could be ready for a hearing tomorrow.

“There won’t be any delay on our part. We will be ready. …We’ve been ready,” DiNicola said.

Check back for updates on this story.

On Wednesday, a board committee declined to endorse Erie’s proposal, which would add the first community college to the statewide system since 1994.  Instead, the committee recommended that the full board schedule a hearing to gather additional information and question witnesses.

The decision disappointed Erie’s community college boosters, who noted that they submitted their application in 2017 and provided a lot of supporting information in the years since. They are encouraging the board to ignore the committee’s recommendation and instead approve the community college application today.

During this morning’s hearing, board member Nicole Carnicella of Centre County said the state and local money that would fund the community college could be better used by putting it directly into the hands of students so they can attend existing technical schools and higher education institutions in Erie. She also questioned the accuracy of information that community college boosters submitted in their application. 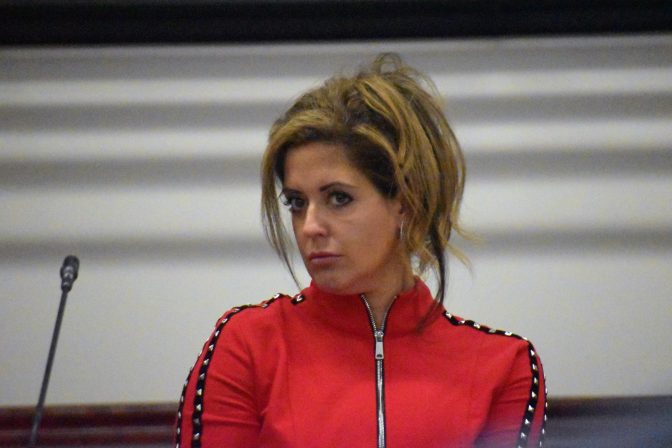 State Board of Education Member Nicole Carnicella listens during a board meeting on Nov. 124, 2019.

Others expressed support for the community college. Board member Sandra Dungee Glenn, former leader of the now-defunct Philadelphia School Reform Commission, said there is clearly an unmet need in Erie. She said she doesn’t know what else could be gained from delaying a vote on the proposal to hear from more witnesses and experts.

Erie is Pennsylvania’s fourth most-populous city in Pennsylvania, and local officials repeatedly point out that theirs is the largest city of its size in the country without a community college.

There are 14 community colleges in the state system, most of which were approved in the 1960s and early 1970s.

The 21-member state board is expected to vote on the proposal later this morning. There are currently three vacant board seats.

Even if the board approves Erie’s proposal, it’s not clear that state funding would be approved. A powerful Republican lawmaker, Senate President Pro Tempore Joe Scarnati, says the creation of an Erie community college would hurt the Northern Pennsylvania Regional College, an open admissions college that serves nine counties and describes itself as neither a traditional campus-based college nor an online college.

Board of Educationcommunity collegesEriehigher education