"A little math never hurt anyone.” 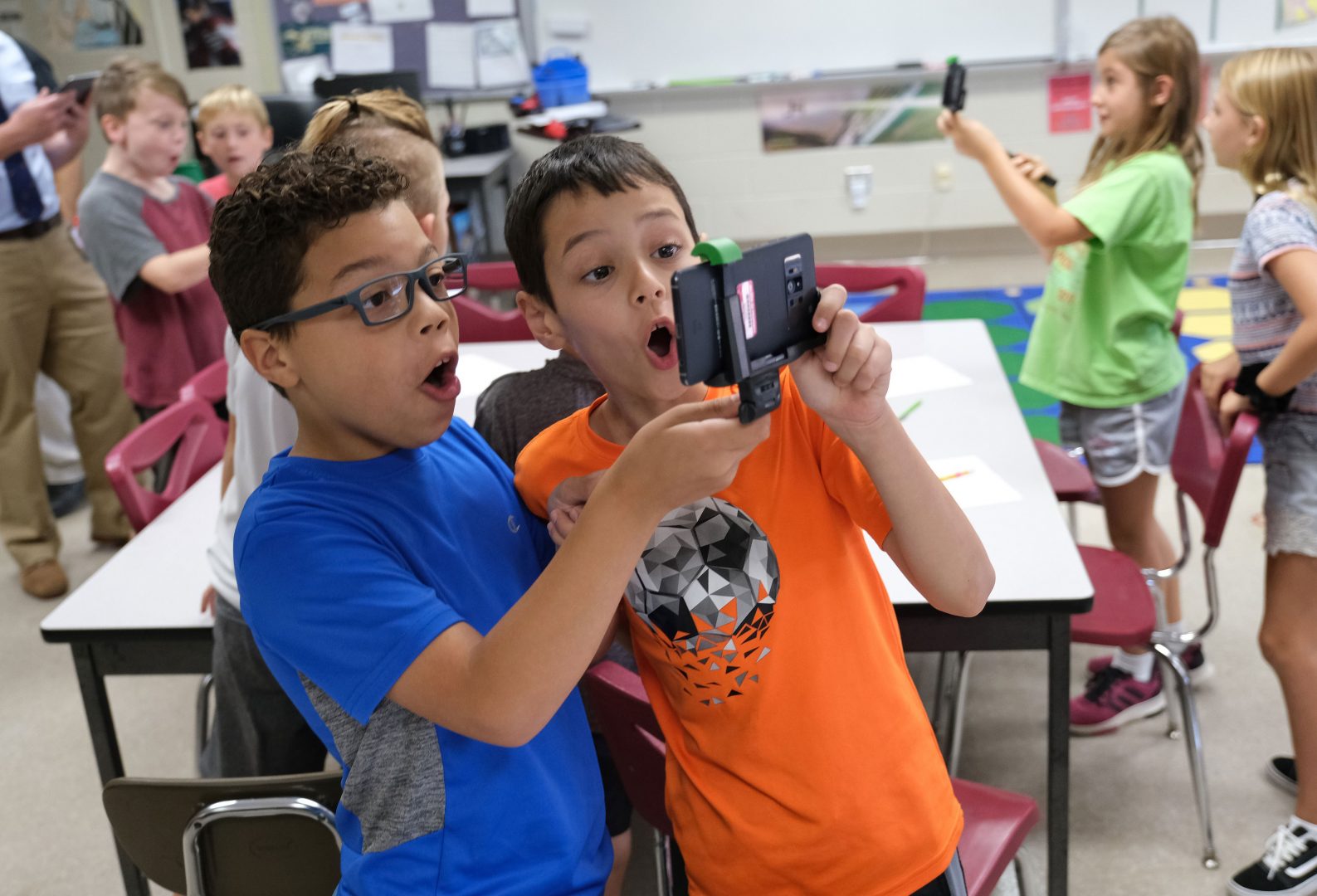 As they view their desks through the screen of a tablet, a powerful F-5 tornado sends cows and fences blowing through the air.

“We roll in a cart with cellphones that are virtual reality and augmented reality, and the classes are just super excited. They’re asking, ‘When are we doing this again?’ Because they want to see things, but they also want to learn more,” said Derr, who teaches at Whitfield Elementary School in the Wilson School District in Berks County.

Having access to cutting-edge technology gives kids a hands-on, interactive way to learn complex concepts that goes beyond showing a video on a projector, Derr said.

The technology in Derr’s class was made possible through PAsmart, a new state grant program designed to “invest in the commonwealth’s existing and future workforce.” Part of that mission is to promote better education in science, technology, engineering and math (STEM).

The state estimates that most jobs created in the next decade will require workers to use computers, and many opportunities will be STEM-related.

“With PAsmart, Pennsylvania will have the most prepared and talented workforce in the country, which will help businesses succeed, grow the middle class, and strengthen the economy for everyone,” Wolf said. “We are partnering with private industry and schools to strategically invest in science and technology education, expand apprenticeships and increase on-the-job training for good careers.”

Erin Allred, whose sons took discovery classes with Derr, said they have changed the way her children see the things around them.

“Legos and K’nex and things like that aren’t just toys anymore,” she said. “They’re tools to solve problems and build bridges.” ‘A little math never hurt anyone’

Manufacturing is the second biggest industry in terms of jobs in Pennsylvania.

The sector increasingly requires workers to be skilled in math and science. And ahead of a retirement boom, some fear there could be a hiring crisis.

In Berks County, where manufacturing is the area’s largest industry and half the workers are older than 45, the issue is especially stark. Almost one in every five people work in manufacturing and two of the county’s top three employers are manufacturers.

Berks leaders hope PAsmart grants can help lessen the impact of what some believe will be a “silver tsunami” in the next five years as baby boomers retire in droves.

To maintain the current level, onlookers say Berks will need to hire 7,000 new workers to avoid harming the area’s economy and employment.

Dan Fogarty, director of workforce development in Berks County, said the county lacks the skilled workers to fill the jobs.

When asked which skill is most lacking, he said, no question: It’s math.

Fogarty said the education system in Berks is not well matched with the opportunities available, which increasingly require higher levels of math proficiency and technological familiarity.

Even if students are interested in STEM careers, “if you’re not proficient quantitatively, you’re not going to be successful in these fields,” he said.

There needs to be a paradigmatic shift in the way math is perceived in America, specifically in Berks, Fogarty said, in order for the manufacturing industry to keep up with competition abroad.

“Too many adults in our culture think that math skills are a gift rather than a competency that can be mastered through grit and good instruction. Other cultures that we are competing with don’t accept math mediocrity so readily,” he said. “So, a little math never hurt anyone.” The Berks County Intermediate Unit received about half a million dollars in PAsmart grant money, and the Kutztown Area School District received $35,000. They partnered to form the Eastern Pennsylvania Innovation Catalyst (EPIC) Network to learn how to best address the workforce needs in Berks.

With the grant money, they have created a technology lending library, programs for regional professional development, and a summer camp for students to explore STEM/computer science-related career fields.

Charles Trovato, STEM program administrator with the intermediate unit, said EPIC worked closely with the Berks Workforce Development Board and other community organizations to determine how to best fix the hiring problem.

One of the biggest goals outlined by EPIC is to change how math and computer science are taught to students in the area.

“[Employers] are seeking more skilled workers who can think with a different kind of logic,” said Scott Hand, director of educational technology for Kutztown. “They can train them on the discrete skills that are specific for their sector, but they need those students who are able to think creatively.”

PAsmart grants also are paying for area teachers to take graduate courses at the University of Pennsylvania to best implement technology in their classrooms. ‘A fun way to keep those skills fresh’

New technology in Berks County is being used to teach computational thinking skills to students as young as 5 and 6 years old.

“Every time I tell them it’s time to use them, they cheer. They’re so excited to use them because, for them, it’s fun. But the teacher in me, of course, I’m looking for something that’s fun, but I’m still hitting that skill and making sure I’m getting my point across …” Lynch said. “It’s just a fun way to keep those skills fresh.”

“It’s awesome that they’re implementing it in the schools because not everyone, you know, has the technology at home,” she said. “It’s not fair for every student to not have that advantage.”

Since the STEM grants were just implemented at the beginning of this school year, the success of the program so far is only anecdotal.

It likely will take years to measure their impact.