A number of lawmakers--almost all Republicans--have their names on the bill that would effectively ban abortion in Pennsylvania.

Some lawmakers are trying to effectively ban abortions in Pa.

The measure would outlaw abortions from the time a fetal heartbeat is detected. That’s usually around six or seven weeks—before most women know they are pregnant. 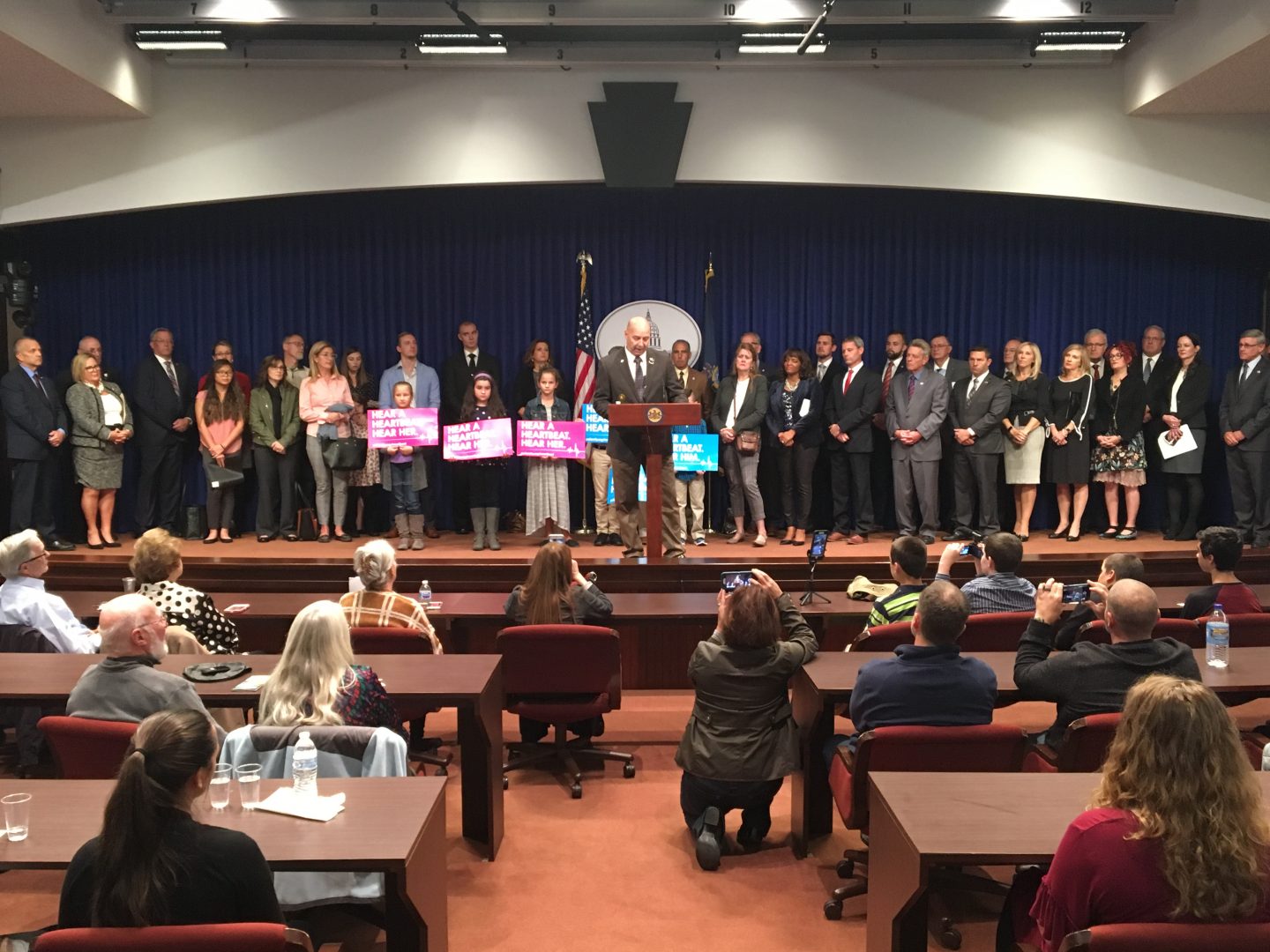 A number of lawmakers--almost all Republicans--have their names on the bill that would effectively ban abortion in Pennsylvania.

(Harrisburg) – A group of Pennsylvania state legislators gathered in the Capitol on Monday to rally support for their effort to dramatically restrict access to abortion.

Their proposal, officially introduced on Oct. 18 and backed mostly by Republicans, is dubbed the heartbeat bill since it would ban abortions after a fetal heartbeat is detectable —generally about six to eight weeks into a pregnancy.

Critics of the bill argue that such an early cutoff amounts to an effective ban on abortion since many women don’t know they are carrying a child until later in their pregnancy.

The two lead sponsors of the bill — state Rep. Stephanie Borowicz of Clinton County and state Sen. Doug Mastriano of the Adams County — said that’s a feature of the legislation, not a bug.

Borowicz said she herself learned she was pregnant with her first son at about the 8-week mark in her pregnancy.

“I believe in [life] from the moment of conception,” Borowicz said. “But this is a great step in my eyes.”

Mastriano initially resisted characterizing the measure as an effective ban on abortion—saying it would merely “protect anyone with a heartbeat.”

But pressed on the point, he conceded, saying, “It probably is—and for that I say, ‘Thank God.’”

Pennsylvania’s current abortion law bans the procedure after 24 weeks and makes exceptions for cases in which the mother’s life is in danger, or in which there is a risk of “substantial and irreversible impairment of a major bodily function of the woman.”

The bill introduced by Mastriano and Borowicz wouldn’t change those exceptions. It also doesn’t include any further exemptions to the law for cases involving incest or rape.

“It’s a pretty hard topic,” he said. “I invite people to engage me, and let’s have a conversation.”

Since 2013, ten other states have passed measures that are similar to or more restrictive than Pennsylvania’s proposed heartbeat bill—Arkansas, North Dakota, Iowa, Kentucky, Mississippi, Missouri, Ohio, Georgia, and Louisiana. All of those measures have been challenged in court, and so far, none has taken effect.

Philadelphia-based OB-GYN Thomas Dardarian, who performs abortions as part of his practice, said the proposed Pennsylvania bill and ones like it are “using people’s emotions to try and sway an opinion.”

If the bill passed, he said, “What would happen is you would now have a subset of women who are not in a position to carry a pregnancy who are going to be forced to do something.”

The American College of Obstetricians and Gynecologists also opposes the various iterations of heartbeat bills, calling the six week or so cutoff “arbitrary” and not reflective of medical accuracy or clinical understanding.

The group says that the pulse that is generally interpreted as a fetal heartbeat in the early weeks of gestation is actually “electrically induced flickering of a portion of the fetal tissue that will become the heart as the embryo develops.”

“ACOG does not use the term ‘heartbeat’ to describe these legislative bans on abortion because it is misleading language, out of step with the anatomical and clinical realities of that stage of pregnancy,” the group said.

In recent years, bills to restrict abortions have had a mixed track record in Pennsylvania’s legislature. In 2017 lawmakers passed a measure that would have narrowed the abortion window by four weeks and banned the most common procedure used in late-term abortions. Democratic Governor Tom Wolf vetoed it.

Earlier this session, the House passed legislation that would ban abortions performed on the sole basis of a fetus being diagnosed with Down syndrome. It has so far languished in the Senate without action. A heartbeat bill introduced last session was not taken up by either chamber.

In a statement, Wolf said he would “veto any abortion ban.”

Policies like heartbeat bills defy “all practical understanding of modern women’s health care,” Wolf said. “These policies run counter to the notion of individual freedom and lack a sound scientific basis. Further, as we have seen in other states, these policies are detrimental to efforts to attract and retain businesses, entrepreneurs and workers.”

Borowicz said she isn’t deterred by the governor’s position. Wolf, she said, is now in the second of his two allotted terms and won’t be governor forever.

123 domestic violence victims killed last year in Pa. They were honored during a Capitol ceremony.