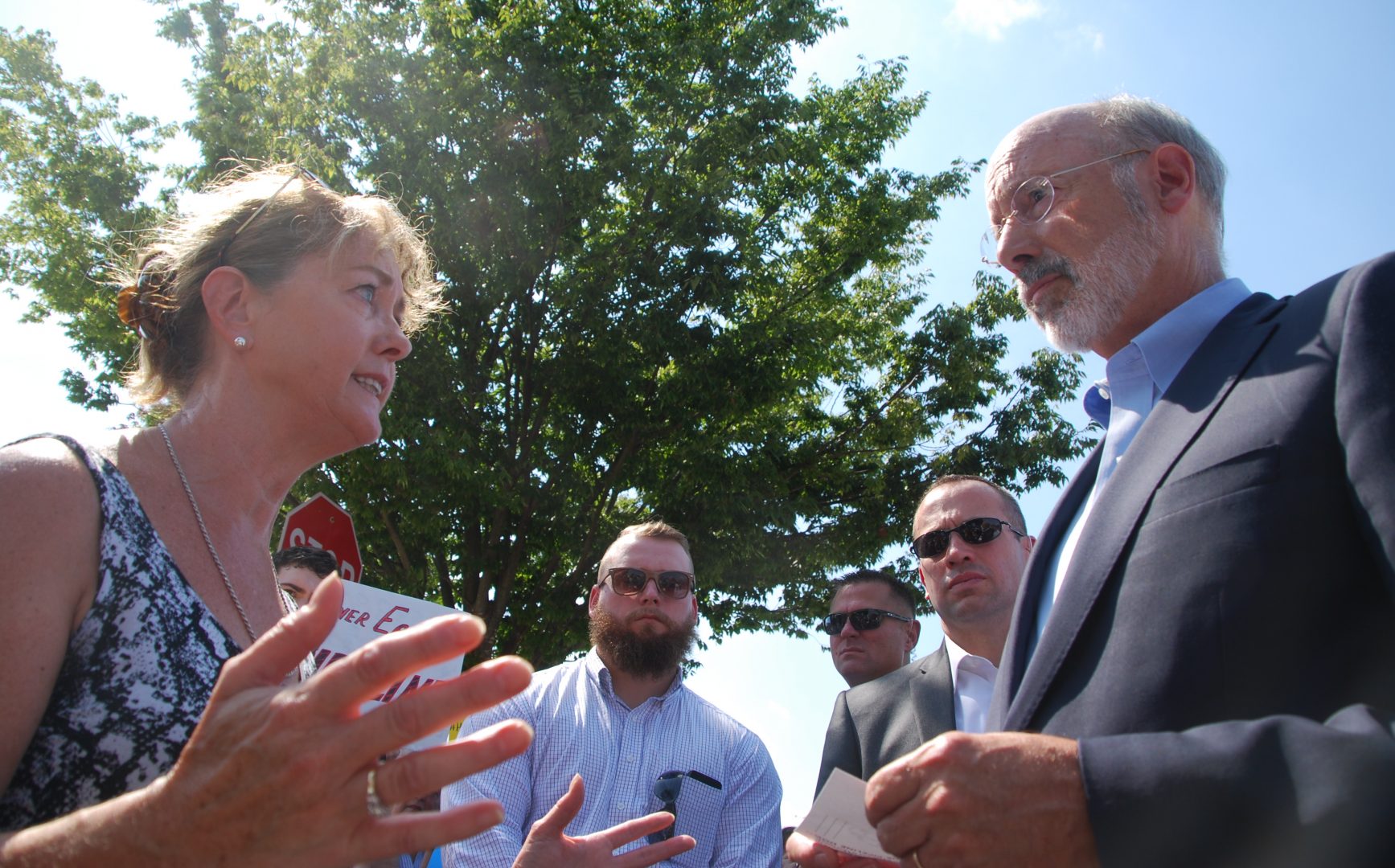 Gov. Tom Wolf told anti-pipeline activists on Thursday that he is not going to stop construction or operation of Sunoco’s Mariner East pipelines.

At a rare face-to-face meeting with opponents at a pipeline construction site in East Goshen Township, Chester County, Wolf was repeatedly urged to shut down the pipeline until public safety can be assured.

But he disappointed activists by stating clearly that he would not do so.

Eve Miari, an organizer of the event, said Wolf’s statement was the first time he had gone on the record saying clearly that he would not shut down the line because of safety concerns.

Wolf’s appearance a few yards from backhoes and other construction vehicles on the pipeline right-of-way was seen by activists as a rare opportunity to state their case that the natural gas liquids pipelines represent a grave risk to public safety in their densely populated suburb.

Six people who live near the cross-state pipeline, plus a supervisor for East Goshen Township, took turns pressing that case to Wolf.

Ginny Kerslake, a resident of West Whiteland Township, said residents really wanted to show Wolf specific places where she said pipeline construction and operation threatens their water quality and physical safety, but instead only had the opportunity for an impromptu meeting in a supermarket parking lot next to the construction site. 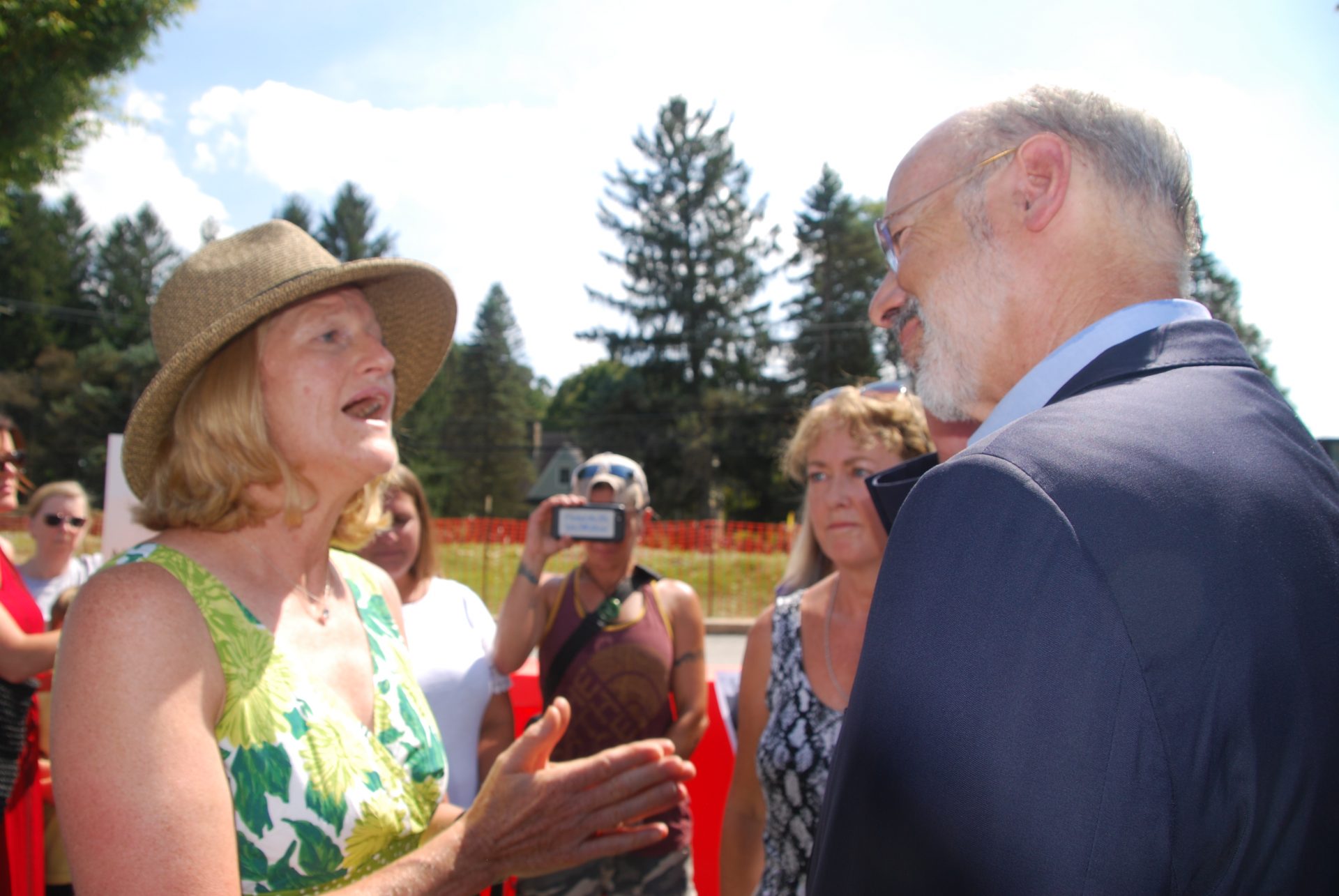 “We do not have a credible and practical plan to protect us in the event of a leak,” Kerslake said. “So my question to you, Governor Wolf, is will you halt Mariner East now, until we have that?” Kerslake said.

Wolf replied: “We just disagree on what we are doing right now. What I really want to know is what have we learned from this and what can we do moving forward?”

“That does not help us right now,” Kerslake responded. “Every day for four and a half years, we’ve been relying on luck.”

She called on Wolf to halt operation of the lines and the construction of unfinished sections, until there’s a credible plan in place for how the public should respond to any leak or explosion of the highly volatile liquids that are being carried by the line.

Rosemary Fuller, a resident of nearby Middletown Township, said her private well has been contaminated with fecal coliform and e-coli as a result of the recent horizontal directional drilling near her house.

Fuller tearfully told Wolf that the contaminated water creates more problems for her husband, who has cancer, and her son, who has a compromised immune system.

As Wolf listened, Fuller accused the Department of Environmental Protection of ignoring her concerns, and said the Public Utility Commission was wrong to award Sunoco the public utility status that allows it to take private land by eminent domain if necessary.

“The processes in place for putting a pipeline like this into operation are all wrong,” she said.

Sunoco says it meets or exceeds all state and federal standards for pipeline construction and safety.

Eric Friedman, a member of the community group Del Chesco United for Pipeline Safety, cited a recent study done for Delaware County Council, which concluded that people could die within a radius of more than a mile from any Mariner East explosion. But there was, Friedman said, no realistic plan for keeping the public safe in such an event.

Senior citizens in a retirement home next to the East Goshen site would not be able to run away from any leak in the line, Friedman told Wolf.

“This project is like driving down a dark, twisty road at night with our lights off,” he said.

Wolf replied: “We are trying to make transmission of this  stuff, and the alternatives to this, I think, are even worse. So, we’ve gotta figure out how to do a better job, I fully agree. What we disagree on (is) in terms of  whether we should keep doing this or not.”

A Wolf aide said pipeline safety is the responsibility of the Public Utility Commission and that the administration has “pushed” the PUC on having strong standards.

Correction: The original version of this story mistakenly attributed a quote about the Public Utility Commission to Gov. Wolf.