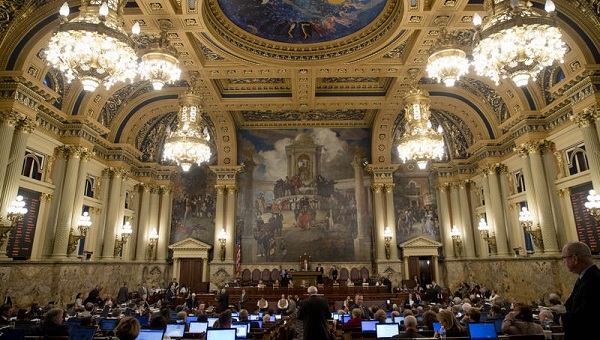 The Chamber of the Pennsylvania House of Representatives. (Matt Rourke/AP Photo)

Pennsylvania colleges and universities could soon be required to offer online, anonymous systems to report sexual assault or violence.

The policy was rolled into school code changes that were approved during budget debates last week. It is now on Gov. Tom Wolf’s desk.

The bill sponsored by Allegheny County democratic representative Dan Frankel reflects the goals of Wolf’s ‘It’s on Us’ campaign. The campaign’s grant program aims to combat campus sexual assault.  Wolf first proposed the idea of an online reporting system in 2017, as part of a six-bill legislative package related to the campaign.

“We need to be able to give universities the information and make sure students feel that they are going to be heard and that they’re going to be taken seriously and that there is some way to get justice in this process,” he said.

According to statistics collected by the federal government the majority of sexual crimes go unreported. Frankel said he hopes that a more accessible reporting system will mean more crimes are punished.

“And help local law enforcement, university campus police and so forth, investigate and control a situation that’s getting out of hand, quite frankly,” he said.

The bill requires that schools include a provision to protect victims and witnesses who make reports.

In 2015, ten Pittsburgh-area colleges and universities “declared campus sexual assault to be a priority across Pittsburgh’s campuses.”

The reporting system provision will take effect in one year. According to a staff member in Frankel’s office, the state’s Department of Education is responsible for holding schools accountable for creating and using the systems. The department will also develop a model policy for schools to use.