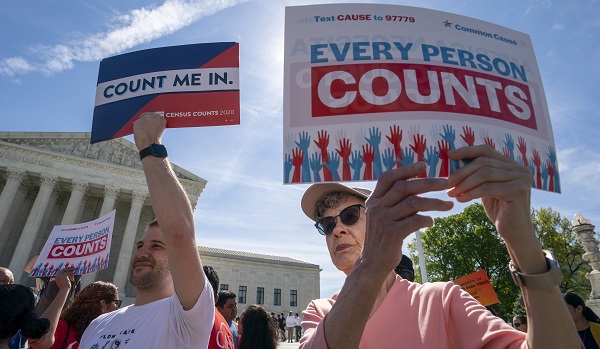 Ralliers in Washington DC urge President Donald Trump not to ask about respondents’ citizenship status on the 2020 census. (Photo by AP)

(Harrisburg) — A group tasked with getting Pennsylvanians counted in the 2020 census is asking for state funds to make it happen.

The Complete Count Commission, which Governor Tom Wolf formed late last year, began behind-the-scenes negotiations in earnest last month. Now the group has settled on what it sees as a moderate ask: one dollar per person, or about $12.8 million.

“We need to act together,” said Keystone Counts head Erin Casey. “This isn’t a Republican or Democratic issue. This is about all of Pennsylvania.”

Census counts are used, among other things, to allocate federal funds for things like healthcare and infrastructure. Penn State Data Center Director Sue Copella, who works closely with US census officials, has said that every uncounted Pennsylvanian amounts to a loss of about $2,093 over ten years.

Commission member Micah Sims, who also heads the watchdog group Common Cause PA, said he would have liked to see a higher goal, but that negotiations came together too close to the budget’s due date for that to be feasible.

The money, he said, would go toward outreach in areas likely to have low response rates–like rural areas with spotty internet, and non-English-speaking communities.

“We’re going to have to provide really good ambassadors to our hard-to-count communities, whether it’s clergy or teachers or what have you,” he said.

Pennsylvania had a strong response rate in the last census, nearly ten years ago. But this one will be significantly different.

Most households will receive their census form next March. Instead of mailing it back, they’ll use an enclosed code to fill it out online. Some internet-poor areas are designated to receive paper forms, and people who fail to respond online within a certain time frame will also get them.

Sims said part of the Complete Count goal is to help people who aren’t comfortable with computers fill out the new version of the form.

“I had to do it with my mom like five times,” he said. “Like ‘Mom, it’s going to come with a little form, it’s not going to be the big one that you used to get, it’s going to have a code on it. You’re going to have to go online and do it.’ So, I think that kind of educational outreach needs to happen.”

The group is hoping to get the money in the budget for the new fiscal year, which starts in July.

Lawmakers are negotiating it now.

In a statement, a spokesman for Wolf said the governor “supports this recommendation for a relatively modest investment that would pay long-term dividends in return.”

Responses from the Republican majorities in the House and Senate were less definite.

A House GOP spokesman said while the caucus believes an accurate count is important, it’s impossible to say for sure where state funding will land because budget negotiations are still ongoing.

A spokeswoman for Senate Republicans said they aim to balance getting an accurate count with “being good stewards of taxpayer dollars so the proposal is under review.”

The chambers return to session in the beginning of June and are expected hash out a budget plan then.

Lurking in the background of the commonwealth’s census preparation efforts is a big unknown: whether President Donald Trump’s administration will be allowed to ask for a person’s citizenship status on the census form, or whether the US Supreme Court will rule that it isn’t permissible.

The groups that make up the Complete Count Commission have generally been against the question, arguing it could dissuade undocumented immigrants–who are supposed to be counted in the census–from returning the form.

The court is expected to make its decision next month.