A 66-year-old homeowner in Schuylkill County wanted to know what keeps these taxes in force. We looked into it.

Bob Smith and his wife moved into the house about 16 years ago.

There’s a lot he likes about the place — a ranch-style house with a finished basement in Schuylkill County.

On a living room wall, Smith has pictures of Mary Ellen, his wife of more than 40 years who died last year, and their old pets. The trees in the backyard give the home a semi-secluded, woodsy feel.

From his long back porch, he can hear water from the West Branch of the Schuylkill River and, a few times a day, the sound of a train going by. He has space in the garage to store a few old garden tractors that he tinkers with.

Smith, though, does have a complaint — one that he shares with many Pennsylvanians and a significant number of state lawmakers: The property taxes.

“I am a senior citizen, age 66, living in Schuylkill County,” Smith wrote to the Listening Post. “I pay property taxes of about 4k per year on a home valued at about 170k, way too much. What factors keep these taxes in force?”

“That’s a bite in the butt,” said Smith, who is retired after working for the Pennsylvania National Guard and the state Department of Military and Veterans Affairs. 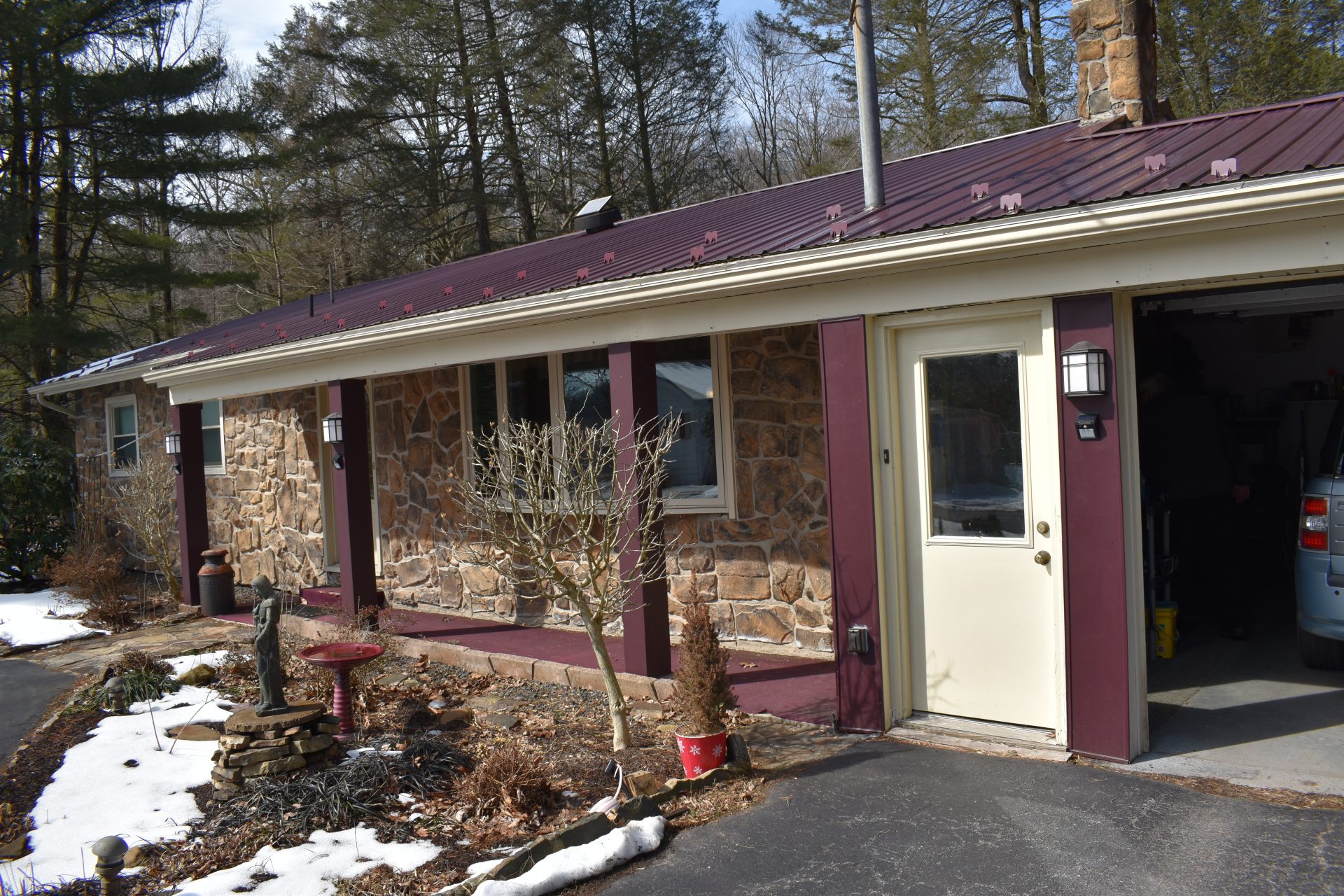 Bob Smith says he pays about $4,000 a year in property taxes on his Schuylkill County home. The home is seen in this photo on March 11, 2019.

Those school district property taxes are the ones that get the most attention from lawmakers in Harrisburg.

State Sen. David Argall, a Republican from Schuylkill County, is one of the lawmakers who has tried for years to kill them.

Here are five things that stand in the way — plus a look at how a recent constitutional amendment gives lawmakers more options.

1. Other taxes would have to rise.

For years, some lawmakers have pushed a plan to eliminate school district property taxes, usually introduced as a bill with 76 or 1776 in the title — a nod to the Declaration of Independence.

Argall introduced the last version of Senate Bill 76 on Feb. 22. Under the plan, the state would:

Some parts of the sales tax expansion would have a relatively small impact for a family: haircuts, amusement park tickets, candy and gum would be added.

But other parts of the sales tax expansion — such as for child care and nursing homes — could cost a family several hundred or thousands of dollars.

Still, Argall thinks those increases would be better than the current property tax system.

“It’s archaic. It’s extraordinarily unpopular,” Argall said. “And I think it’s just time to put a stake through its heart and kill it off once and for all.”

And in a co-sponsorship memo, Argall said no tax should have the power to leave someone homeless.

2. It would be a really big change — especially for Pennsylvania.

Pennsylvania’s education system puts a heavier burden on local taxpayers than most other states.

In Pennsylvania, the state provides nearly 38 percent of the money for public K-12 schools, according to U.S. census data for the 2016 fiscal year.

That status quo that is hard to change, Argall said.

“While I think the system is rotten at the core, it’s pretty well been in effect since at least the 1830s,” Argall said, later adding, “I think people are naturally afraid of change, and this is not a small change. This would be an extraordinarily massive change.”

3. There are a wide range of opponents

The issue doesn’t break down neatly along party or ideological lines.

The Pennsylvania Chamber of Business and Industry says eliminating property taxes would just shift the burden without addressing “unsustainable cost-drivers and unfunded mandates.” The chamber also says that money from property taxes is more reliable than from income and sales taxes.

And many opponents like to point out that, under elimination plans, property taxes would remain in place until a district’s local debt is paid off.

4. The governor is not on board. 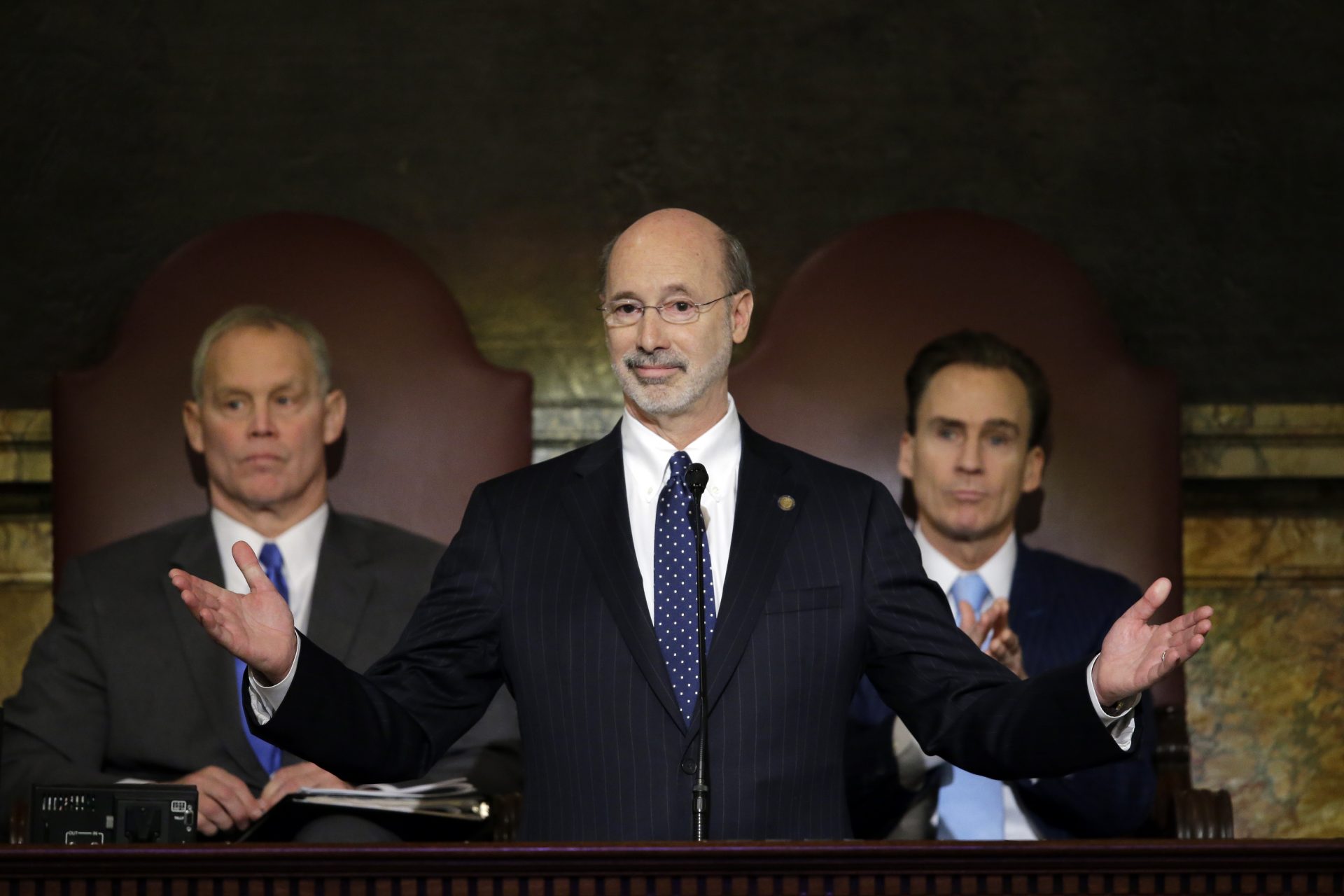 Gov. Tom Wolf delivers his budget address for the 2015-16 fiscal year to a joint session of the Pennsylvania House and Senate on Tuesday, March 3, 2015, in Harrisburg, Pa.

During Scott Wagner’s campaign for governor, the Republican promised to junk the property tax. But he lost the 2018 election to incumbent Democratic Gov. Tom Wolf.

In his first budget address in 2015, Wolf proposed a major tax shift that would have reduced property taxes for homeowners, but that didn’t pass. And he has opposed the 76 plans to fully cut school property taxes.

“I’ve had some interesting conversations with the governor,” Argall said. “He’s sympathetic to the cause. He has some objections to the bill. We’re trying to work through those.”

5. Any shift risks a potential backlash 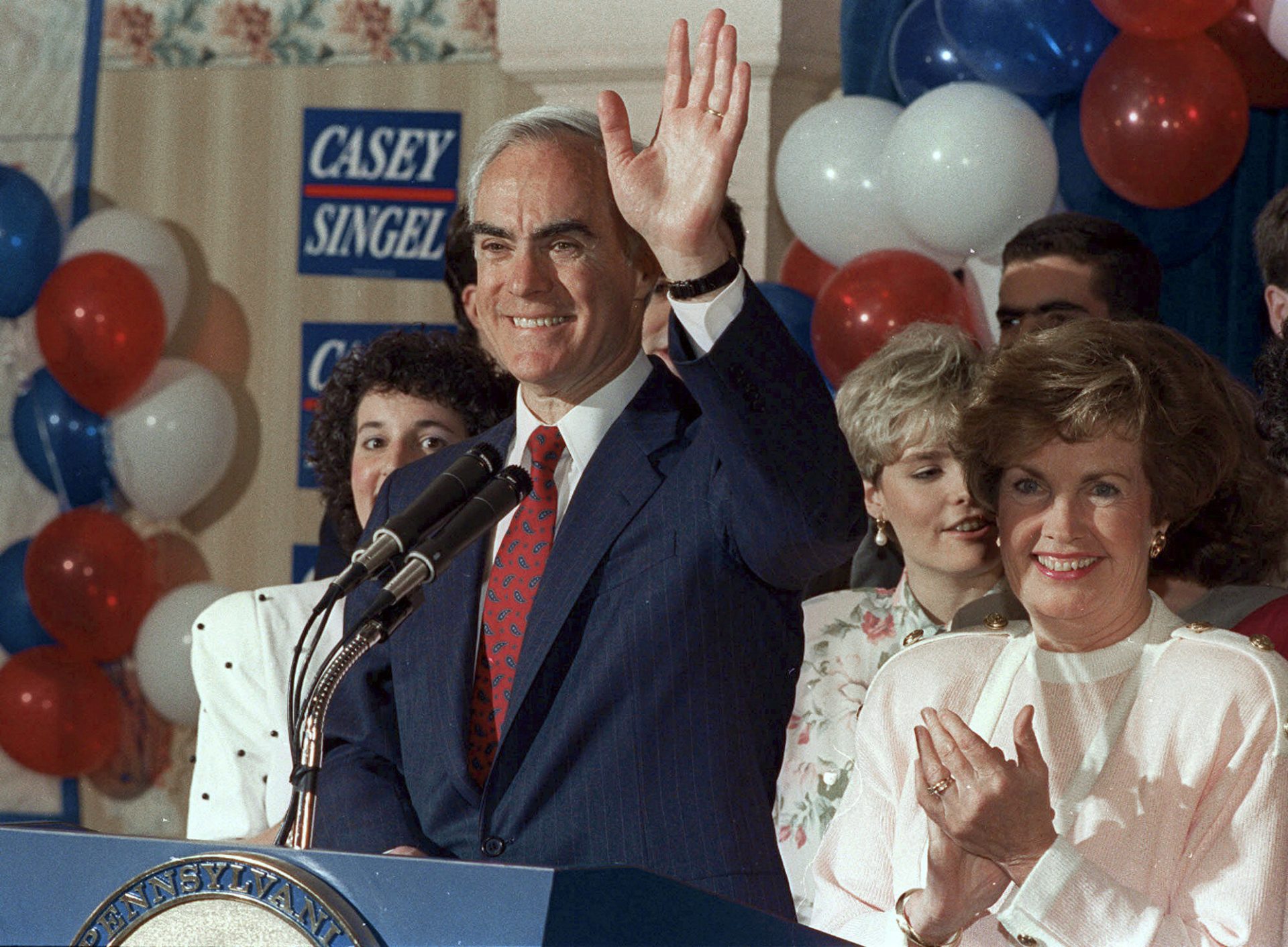 In this May 15, 1990, file photo, Pennsylvania Gov. Robert P. Casey waves as he celebrates winning the Democratic nomination for governor again during a primary night party in Scranton, Pa.

In 1988, Pennsylvania lawmakers approved a plan to change the local tax system.

“At the heart of the plan is a tradeoff: Homeowners are being promised property tax reductions in exchange for allowing local governments to raise income taxes,” The Associated Press reported in 1989.

But the article noted that there was a lot of confusion over the plan and who exactly would benefit from the shift.

When it came time for voters to weigh in on the proposed constitutional amendment, they rejected the plan in big numbers.

“Somehow the message did not get through,” Democratic Gov. Robert P. Casey said following the referendum vote, according to Education Week coverage. “The average person had difficulty relating the benefits of the plan to their own individual circumstances.”

That was, of course, a different plan than full elimination of school property taxes.

But the concern about creating new winners and losers is an ongoing one.

“There’s a reason why property taxes have been out there for 40 years of discussion — because there’s no easy answer,” Corman said.

He said all four caucuses and the governor would need to get behind a proposal “and walk down the aisle together” to overcome the inherent political challenges.

We got a question from a reader and Schuylkill County homeowner about school property taxes. We looked into it. pic.twitter.com/FRR9TS4YDn

Lawmakers have new options available to them now, thanks to a constitutional amendment that voters approved in 2017. That amendment makes it possible to eliminate property taxes for someone’s primary residence while keeping them for commercial, industrial and other properties.

Argall said he would prefer to eliminate school property taxes for all. But he said the homeowner-only option has been written and might be added as an amendment into Senate Bill 76 if full elimination lacks support to move ahead.

Right now, full elimination is about five or six votes short of passing in the Senate, he said.

“We all understand that, you know, some changes may be necessary,” Argall said. “But we’re using 76 as the goal, the framework and then we’re trying to build on it from there.”

Wolf’s press secretary, J.J. Abbott, said the governor opposes taxing food or clothing. He said any reform needs to ensure that school districts aren’t negatively impacted and said Wolf wants to focus on finding a compromise that reduces the burden for the most vulnerable.

“Recent moves to focus on primary residences are a positive step in the right direction,” Abbott said.

As for Smith, he plans to move out of his Schuylkill County house. But property taxes, he said, aren’t to blame for that. He can still afford to live there. 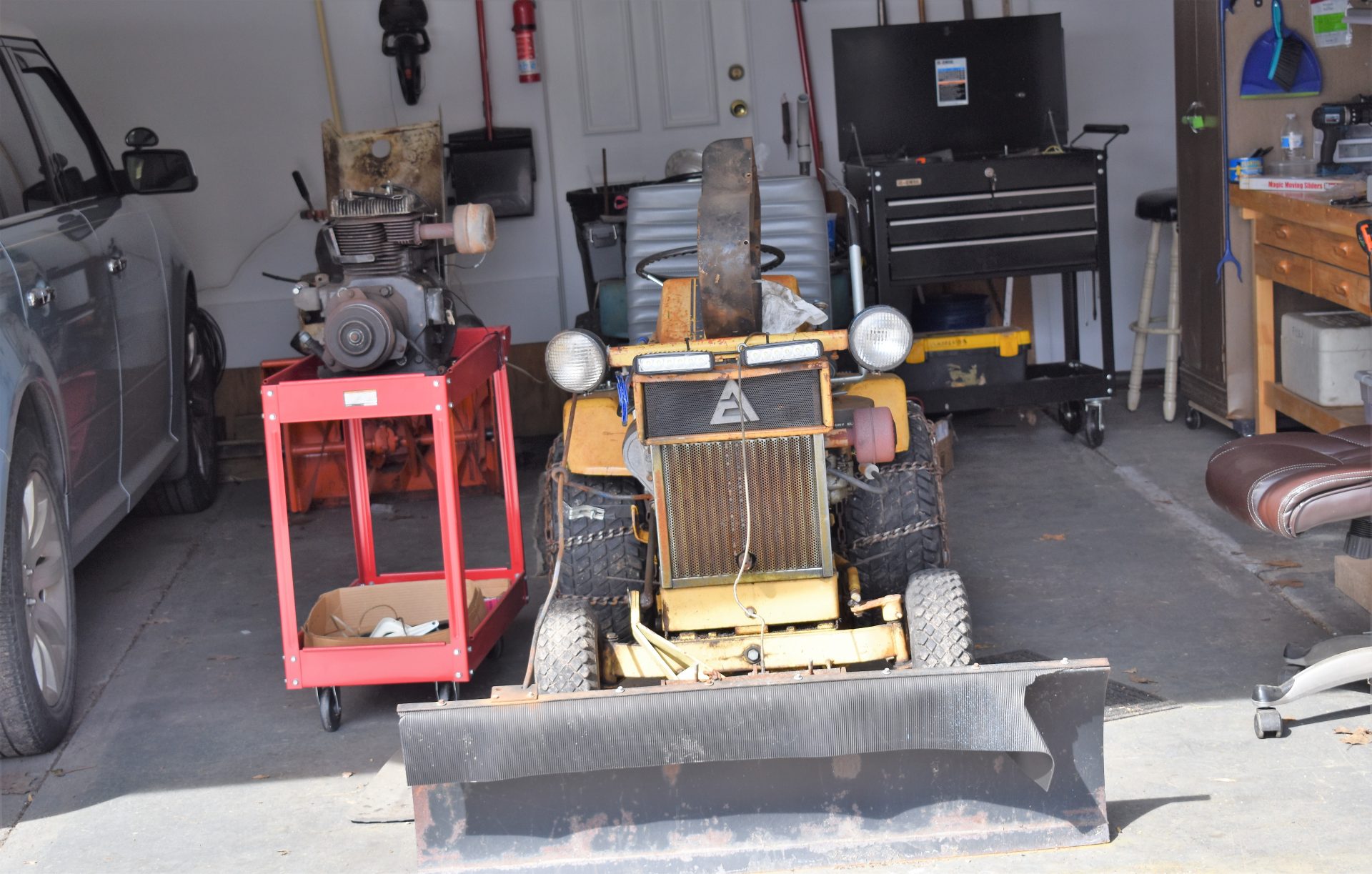 But now that his wife is gone, it’s just Smith and a cat living there. The house seems too big and he doesn’t want to deal with the yard work.

He’s looked into moving to Maryland or Delaware. But, right now, he’s leaning toward a mobile home, about 20 miles away from where he lives now.

He expects that his property taxes would be thousands of dollars less — not because of different rates, but because the property value would be so much less.

He’s not sure yet what he would do with the extra money.

“I’m going to see how much extra I have — if I have extra,” Smith said. “But one of the things I want to do is try to do something good with that money — whatever it may be.”