A crowd of people line up to speak during a forum on legalizing marijuana. The forum took place on March 7, 2019, in Somerset County.

In one rural Pa. county, some pushback to legalizing marijuana 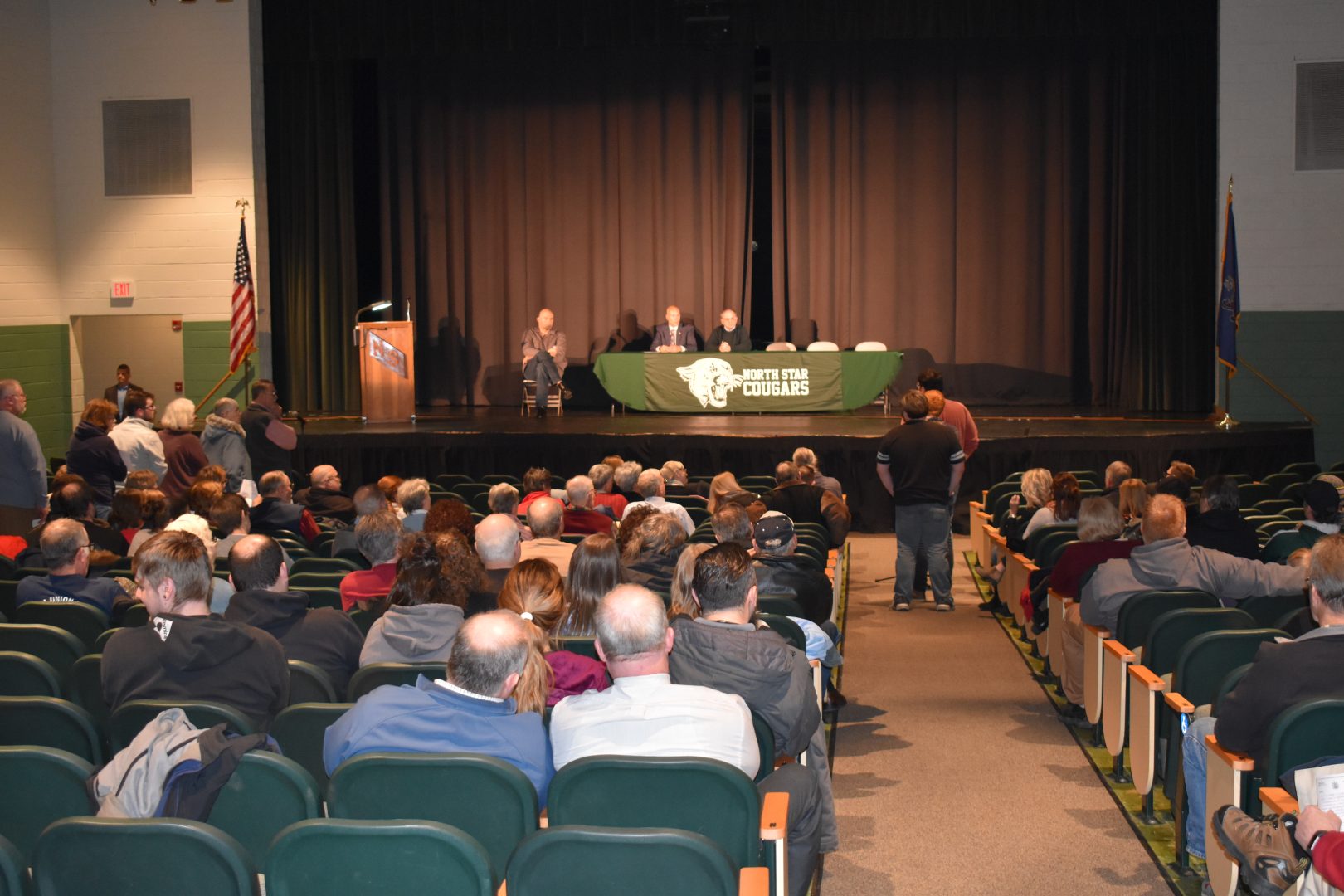 A crowd of people line up to speak during a forum on legalizing marijuana. The forum took place on March 7, 2019, in Somerset County.

A job with the state police brought Mark Hogan to rural Somerset County. He and his wife ended up staying and raising kids there.

His kids moved away — to Boston, Lancaster and Pittsburgh — because there weren’t good job options for them in the place where they grew up.

Hogan mentioned those kids up during a public forum on Thursday evening, one of several dozen such events taking place across the state. Lt. Gov. John Fetterman plans to visit all 67 Pennsylvania counties as part of what the Wolf administration calls a listening tour for legalizing recreational marijuana.

At the Somerset County event, Fetterman said he heard from a larger share of opponents than at any other forum so far.

So far, Fetterman has visited more than a dozen counties, and he said the others were “all unambiguously pro.” In Somerset County, Fetterman pegged the pro and con split at about 50/50 on Thursday night, while a Republican state senator who attended thought the share of opponents was higher.

I was at a forum last night on legalizing recreational marijuana. Here is how people voted on the issue. pic.twitter.com/3jg5i1FmhT

Hogan, 59, was one of the more than 100 people gathered inside an auditorium at North Star High School. He suggested lawmakers just want to legalize marijuana so the state can tax it.

“Instead of taxing people, so they can get stoned and we can make money to pay the budget, let’s develop jobs,” Hogan said. “Let’s bring industry in.”

Some in the crowd applauded. Hogan raised his voice.

“We got empty industrial parks in this county, and we have no jobs,” Hogan said as the applause continued. “…If people have jobs, they don’t have to turn to drugs to escape their depression. They’ll have the job, they’ll be able to support a family and this county won’t be dying.”

Hogan finished his point, stepped away from a microphone and received some more applause.

Then Hogan appeared to remember that he hadn’t officially put himself in the pro, con or middle position — something Fetterman asked of some people.

“That’s a con, by the way,” Hogan yelled, so he could be heard without the microphone.

“Thanks for clarifying,” Fetterman replied, to some laughs. 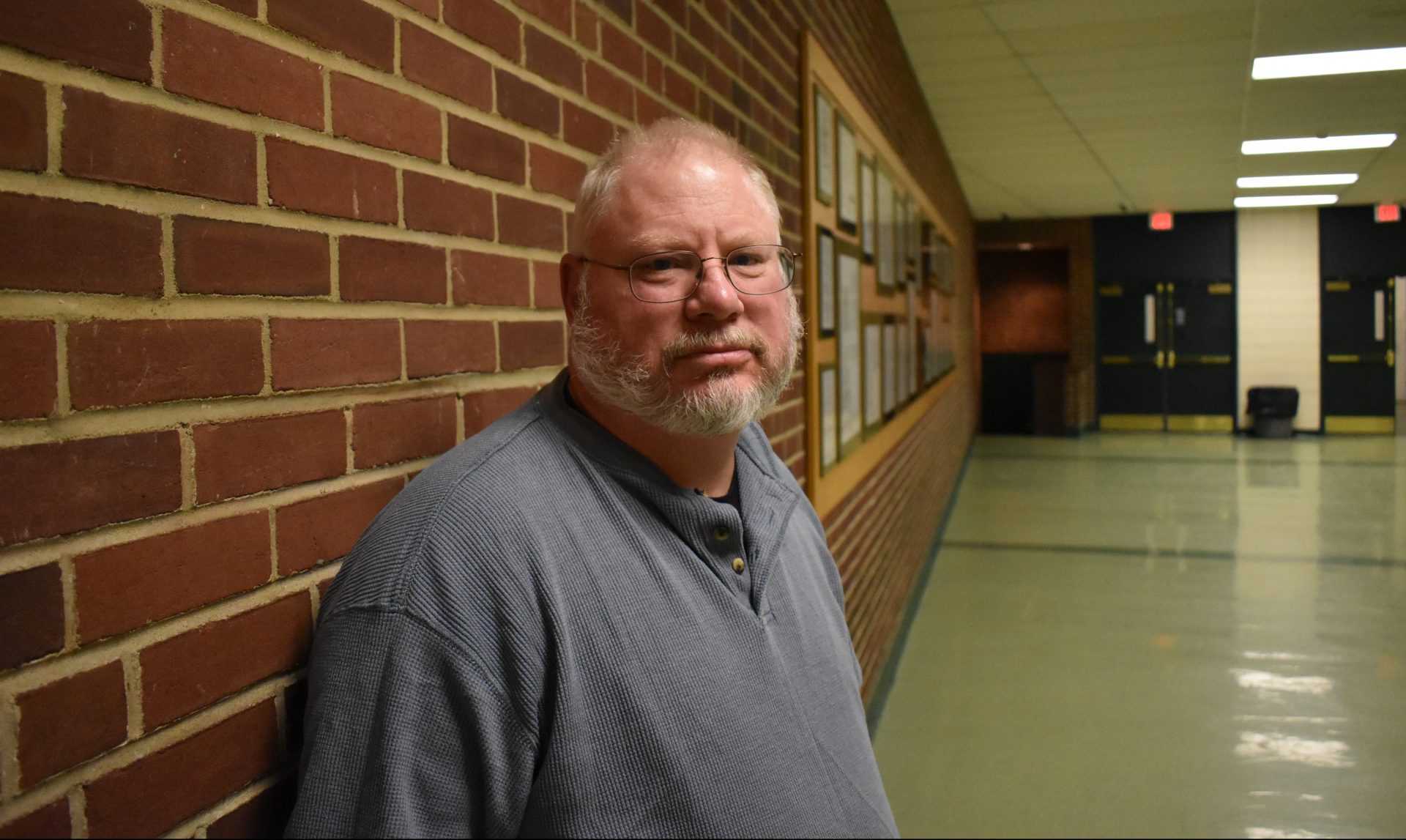 Somerset County — about 70 miles southeast of Pittsburgh — is one of the many rural counties in the state that often vote Republican. In 2018, even though Democratic Gov. Tom Wolf easily won re-election, he only won about 32 percent of the vote in Somerset County.

The county is home to a fair number of covered bridges, giant wind turbines and the Flight 93 National Memorial.

At the beginning of the year, the county had a 5.2 percent unemployment rate — a percentage point higher than the state average. The top employers there include the state government, a ski resort, two medical systems, the county government and a distribution center for CVS.

Hogan — who grew up on Long Island, New York, and is now retired from the Pennsylvania State Police — moved to Somerset County about 32 years ago.

He hated the winters.

But the scenery is beautiful, and it’s a good place for him to fish for bass and trout. Hogan liked the people — even the ones he arrested. He and his wife got involved in a church and decided to raise their family there.

“That’s great when you start having children,” Hogan said outside the auditorium. “But then you realize when you look around, there was no industry for them, no job security for them — unless you wanted to be a coal miner and that’s up and down.”

And he thinks legalizing marijuana would just make things worse for the area.

‘That’s unfortunate, but that’s the truth’

Hogan wasn’t the only person to criticize the idea of taxing marijuana.

But on Thursday night when one of the other audience members called the forum a “dog and pony show” that was really about taxing people, Fetterman objected.

“With all due respect, sir, this show is to hear what you and everyone else in the audience thinks about the topic,” Fetterman said. “…There’s no other agenda.”

The man told Fetterman that he didn’t believe him.

After the meeting, Fetterman told reporters he didn’t see a divide between rural areas and ones that are more suburban and urban. He recently held a listening session Schuylkill County, and the room there seemed about 90 percent in support of legalization, he said.

“One thing I’ve learned is you can’t judge a room, a county, an individual … and predict where they’re going to be on the subject matter,” Fetterman said. 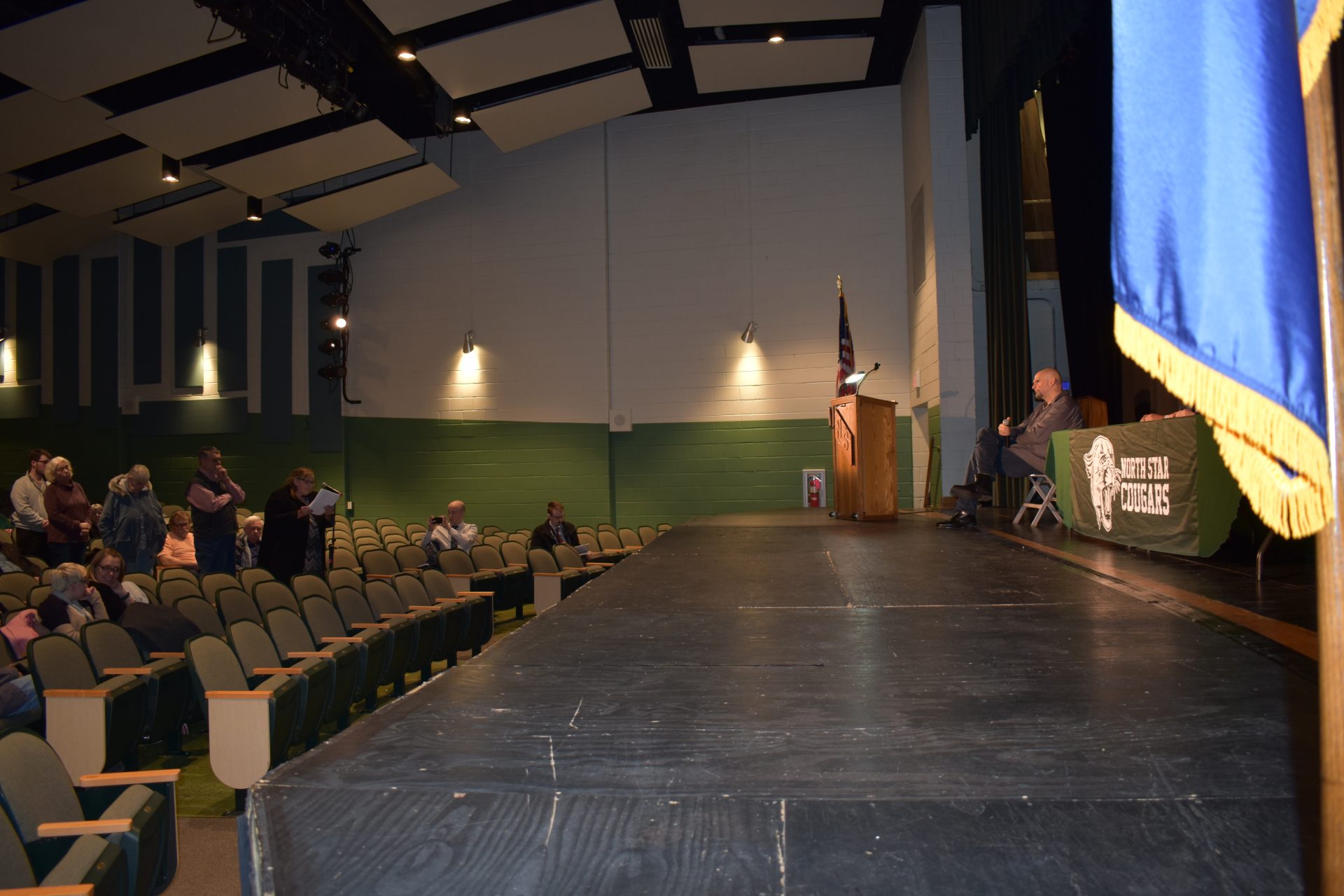 Lt. Gov. John Fetterman listens to a speaker in Somerset County on March 7, 2019.

For state Sen. Pat Stefano, Thursday’s forum was the third one for him. He’s a Republican who represents all of Somerset and Fayette counties, plus part of Westmoreland County.

He is chairman of the Law & Justice Committee in the state Senate and expects any marijuana legalization bills to come to his committee. He supported legalizing medical marijuana in Pennsylvania but raised a warning about legalizing recreational marijuana.

“This is a very dangerous move that we’re talking about making,” Stefano told reporters, later adding, “Let’s say that I am very wary of moving in the wrong direction. We better be very careful.”

Chad Bowers was one of the legalization supporters who showed up on Thursday. He’s a delivery driver in his early 40s.

He said he has used marijuana off and on for years. 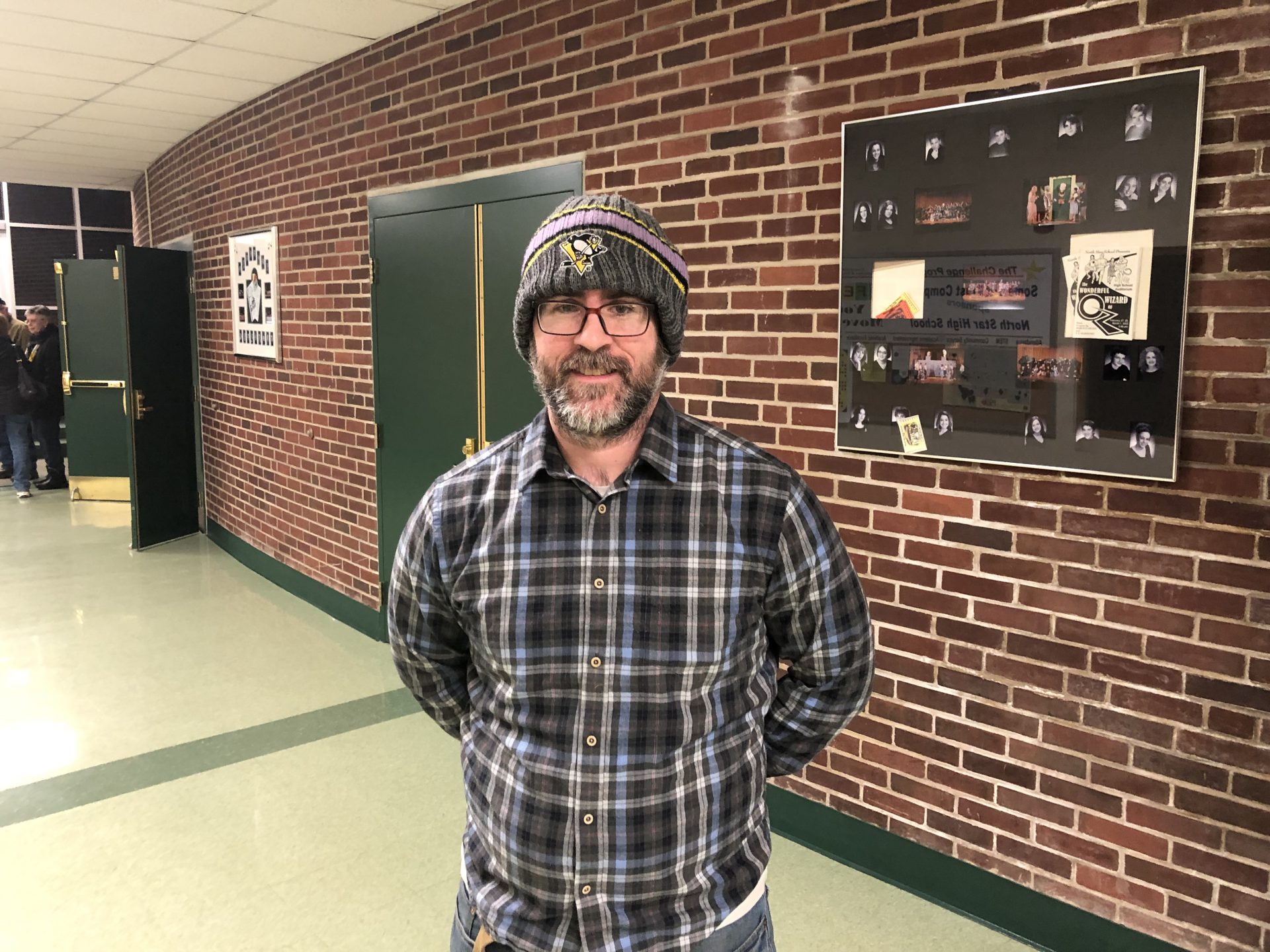 Chad Bowers supports legalizing marijuana in Pennsylvania. He attended a forum on the topic on March 7, 2019, in Somerset County.

“I honestly don’t feel it’s a hindrance to my daily life. …It’s always in the evenings after I’m just home relaxing,” Bowers said. “I never do it when I’m out and around, or anything like that.”

Bowers is originally from the Harrisburg area. He moved to Somerset County about 20 years ago because his wife and her family are from the area.

He figured most people in the county are against legalizing marijuana, so he wanted to show up to “hopefully educate some people” and put to rest “the stigma of the bogeyman cannabis smoker.”

Bowers thinks Fetterman will get more pushback in rural areas, but he’s glad the lieutenant governor is going everywhere.

Fetterman expects to finish the tour by the end of May.

He has more rural stops coming up. He’s scheduled to hold forums in McKean and Elk counties in northern Pennsylvania on Saturday.

Lt. Gov. John Fetterman speaks to a crowd in Somerset County on March 7, 2019.

10 years later, Pa.’s open records law has improved access, but some say the law has its flaws