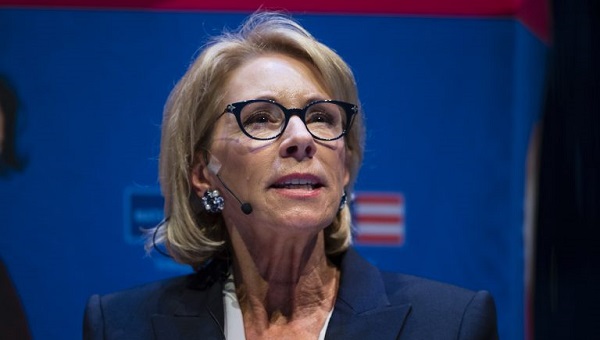 *This story has been updated*

(Philadelphia) — U.S. Secretary of Education Betsy DeVos called out the nation’s universities Monday in a talk about campus free speech and the First Amendment.

DeVos said “precious few” campuses could be described as “free and open,” and said a rising tide of censorship could be traced back to a “relativistic culture” in which truth is subjective.

“Our self-centered culture denies truth because acknowledging it would mean certain feelings and certain ideas could be wrong,” DeVos said during a lecture at the National Constitution Center in Philadelphia, which hosted her as part of its Constitution Day celebration.

The result, DeVos claimed, is a campus culture where students try to shout down speakers they dislike, and where administrators use bureaucratic tricks to suppress speech that could inflame tensions. She claimed colleges are attempting to promote harmony when they should, instead, try to promote truth.

“Administrators too often attempt to shield students from ideas they subjectively decide are hateful or offensive or injurious or ones they just don’t like,” she said.

She specifically cited cases at Arkansas State University, the University of Michigan, Lawrence University and William and Mary to back her claims. The first two incidences involved students affiliated with conservative causes and the third, in DeVos’s home state, dealt with political correctness in comedy. DeVos’s fourth example came from an event where students affiliated with Black Lives Matter disrupted a talk by a free speech advocate from the American Civil Liberties Union.

DeVos did not spend her entire, 30-minute talk thrashing higher-ed.

She praised the University of Chicago for its commitment to free speech and commended Princeton professors, and ideological opposites, Cornel West and Robert George, for a recent statement on “freedom of thought.”

Some critics, however, see defenses of free speech as a subtle way to undercut marginalized groups or incubate dangerous ideas. College students themselves seem to be struggling with the primacy of free speech. A recent survey found college students were about split when asked to determine whether free speech or inclusivity was more important to American democracy.

This isn’t the first time DeVos has spoken out on what she sees as a growing tide of censorship on college campuses. Last year, she urged state legislators to “use our bully pulpit” to combat free-speech abuses in higher-ed. In those remarks she also made an oblique reference to “the power of the purse,” suggesting perhaps that states should withhold money from public universities that fail to protect free speech.

On Monday she quashed that idea.

“The way to remedy this threat to intellectual freedom on campuses is not accomplished with government muscle,” DeVos said. “A solution won’t come from defunding an institution of learning or merely getting the words of a campus policy exactly right.”

Instead, DeVos said, teachers should eschew the teachings of “relativism,” which she called “pernicious,” in favor of a worldview that acknowledges the presence of objective truths. She also indicated there should be a greater focus on civics and U.S. History.

“We’ve been focusing a lot on math, science, and reading — which are all, of course, very important subjects — but I think it’s really important students learn about the history of this nation,” she said.

DeVos lectured Monday in front of a small audience the featured mostly local students. She then answered questions for about ten minutes, but allowed none from the press.

“Why do you believe you’re qualified to serve as educational secretary with no experience in the public school system,” asked Collins, a student at Philadelphia’s Constitution High School.

DeVos said her long history in school-choice advocacy and philanthropy prepared her for the job in Washington.

“We want parents to have other choices and other opportunities to make sure their child finds a place that fits and works for them,” DeVos said.

DeVos’ father-in-law, Richard DeVos Sr., was a longtime trustee of the Constitution Center. The elder DeVos, co-founder of Amway, died earlier this month.