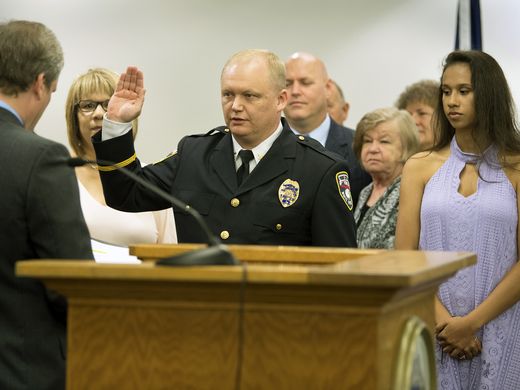 Troy Bankert is sworn in as chief of police in York during a ceremony at City Hall in York Monday. (Paul Kuehnel/York Daily Record)

(York) — For the past six months, Troy Bankert has carried the title of “interim” before his rank of police chief for the City of York; but after a ceremony on Monday, he is now officially the full-on, legitimate chief.

“It’s the last time you get to hear that word,” York Mayor Michael Helfrich said at York City Council chambers. “No more ‘interim.'”

It’s been a tumultuous, tragic six months for Bankert and the city — for both its police officers and firefighters —