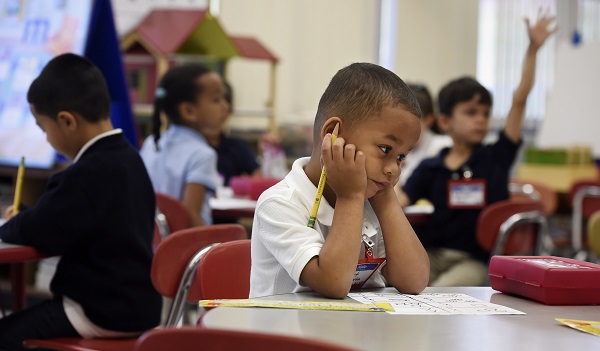 In this Friday, Sept. 29, 2017 photo, Elionet Saez Martin, of Puerto Rico, works at his desk in his kindergarten class at Chamberlain Elementary School in New Britain, Conn. As Hurricane Maria churned toward Puerto Rico, his mother put him and his 9-year-old brother, Eliot, on a plane to be with their grandfather in Connecticut. The brothers are among the first of what is expected to be large numbers of Puerto Rican children enrolling in school districts on the U.S. mainland, particularly in urban areas from Florida to Massachusetts with large Puerto Rican populations. (AP Photo/Jessica Hill)

(Harrisburg) — The majority of Puerto Rico is still without power, more than a month after Hurricane Maria devastated the island.

While recovery efforts continue, hundreds of families have fled to Pennsylvania — bringing along 300 school-aged children.

Dozens of students have already enrolled in school districts across the midstate and more are expected to arrive in the coming weeks.

Lisette Rivera is the site coordinator for Families in Transition in the School District of Lancaster. The program assists homeless families in the district. Rivera said they are helping at least 40 students displaced by hurricanes.

She said some Puerto Ricans headed for Lancaster because they had relatives or friends in the area.

“We have serviced families that have literally just come right from Puerto Rico with actually no plan, because they’re just that desperate to get off of the island due to the circumstances there,” Rivera said.

She added, because the district is large, it is able to absorb the volume of new students relatively well.

The new students will be tested on their English language skills and given additional support in the classroom.

The School District of Lancaster is asking for donations of gently used coats and basic hygiene products like toothbrushes and soap to help assist families. Donations can be dropped off weekdays from 9 to 11 a.m. and 2 to 4 p.m. at the administrative offices at 251 S. Prince St.

Under guidelines from the state Education Department, schools must ensure homeless students have access to education.