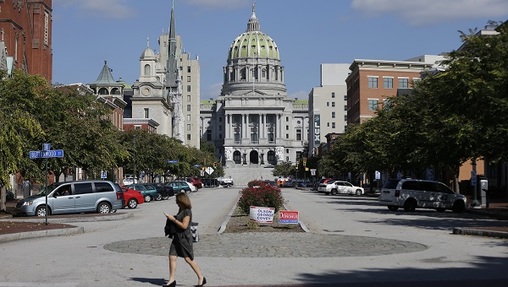 (Harrisburg) — It has been several days since negotiations to balance Pennsylvania’s months-late budget melted down, with Governor Wolf intervening with a partial funding plan of his own.

But a lot is still unknown about the commonwealth’s fiscal future.

On Wednesday, the governor unexpectedly announced a decision to fill part of the state’s $2.2 billion budget gap himself, by borrowing against the liquor industry.

House Republican spokesman Steve Miskin said while most of his caucus prefers borrowing $1.2 billion against Liquor Control Board profits over tax increases, they’re still not sold on the idea.

“There are definitely questions. The main concern is, is it legal, and can he unilaterally do it?” Miskin asked.

“We don’t think he should,” he added.  “If he thinks he’s able to, why hasn’t he done this already? Why did he wait three months, not pay bills, etcetera?”

Senate Republicans also said they’re seeking a legal opinion. Neither caucus has one yet.

Administration Budget Secretary Randy Albright has said the office can absolutely securitize liquor sales, so long as the Liquor Control Board agrees to the plan.

“This is fully within the authority of the LCB,” he said last week. “We can look backwards over a multi-decade period–they have made annual transfers sufficient enough to cover that amount of revenue.”

The LCB board said they’ll work with the administration.

Wolf Spokesman JJ Abbott elaborated that the LCB has the power to enter into a certificate of participation–or COP–lease at will.

He said it’s a financing tool with some precedent in the commonwealth.

“For instance, in the early 1990s, under then-Governor Casey’s direction, the Commonwealth entered into a COPs transaction which provided financing to construct various county prisons,” Abbott said.

But Albright–and the governor–acknowledge the liquor money can’t come in soon enough to fix the commonwealth’s short-term cash problem.

The main bank account has been running dangerously low for most of this fiscal year.

The administration hasn’t specified what it’ll do yet. But Abbott says they’re confident that “following the Governor’s actions to balance the budget, pending payments to school districts, Medicaid providers and others who rely on state payments will be made on time.”

Wolf has said those actions will include “managing” state employee complements through attrition, and taking other unspecified actions to cut costs.

He also announced Monday that he plans to borrow more money to further plug the budget gap–this time by leasing out the Pennsylvania Farm Show complex for $200 million up front, then leasing it back for an annual fee, plus interest.

In recent years, similar cash flow issues have been handled via a short-term loan from the state treasurer. This year, Treasurer Joe Torsella declined to extend a line of credit because the budget wasn’t balanced.

His office hasn’t confirmed whether the governor’s plan to borrow against liquor profits and the Farm Show complex will change that.

This story has been updated to include an additional comment from a spokesman for the governor about the nature of the PLCB’s proposed lease agreement.