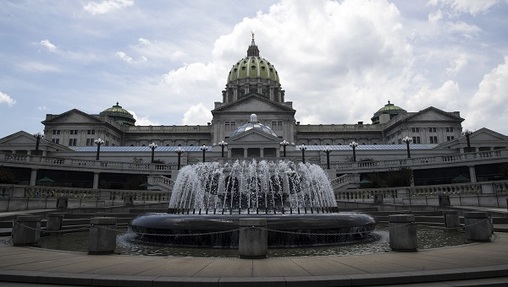 House Republicans are currently holding out against the rest of the legislature on how to fund the budget. (Photo by AP)

(Harrisburg) – Pennsylvania is in its third month with no balanced budget.

Governor Tom Wolf, Senate Democrats and Republicans, and House Democrats are pushing House Republicans to agree to a compromise plan that would raise some taxes and borrow money to fill a $2.2 billion shortfall.

The caucus is still holding out–and even its own members appear conflicted on what to do.

About 20 of the House’s more conservative members released a plan this week to balance the budget on transfers from the special state funds that help pay for things like transportation and parks.

The other caucuses responded skeptically, voicing concerns that the proposal would pull funding from those programs and projects–though supporters insist it won’t.

House GOP leaders apparently support it. But there hasn’t been a real vote-count yet, and some of the more moderate House Republicans are indicating they aren’t sold.

One of those moderates is Gene DiGirolamo, of Bucks County. He’s pushing his own, solo budget plan, which was made without consulting party leaders.

“I think if I would have discussed this with my leadership before, they would have tried to talk me out of doing this,” DiGirolamo said.

The plan includes taxes on personal income and natural gas drillers–things the conservative wing of the House wanted to avoid.

DiGirolamo said he thinks his approach, or one like it, might actually pass if it got to the House floor. But it wouldn’t be with a Republican majority.

It’s currently rare for bills to make it to the floor without majority support from the majority party.

The chamber returns to session Monday, and is expected to consider the more conservative proposal.