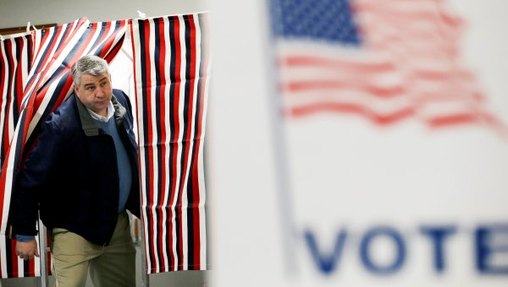 Pennsylvania’s voting machines are due to be replaced, according to state officials. But that’s unlikely to happen. (Photo by AP)

(Harrisburg) — Election officials across the country are trying to make sure voting infrastructure is up to date, after concerns over potential hacking in the 2016 election.

Pennsylvania is no exception.

In 2002, the federal government handed down almost $4 billion for states to update their voting machines and other election equipment. Most states–including Pennsylvania–have long since drained their share.

The commonwealth bought new voting machines about a decade ago. They’re largely electronic and Department of State officials have said they’re due to be replaced again.

But there’s not much money for new ones.

According to a survey from Politico, Pennsylvania was one of several states whose election officials lobbied their legislatures for more funding this year, but were denied.

A spokeswoman for the Department of State wouldn’t confirm that. But she did say the department has “procured additional resources for election night security” from existing budgets–albeit without appropriating anything above normal spending levels.

She declined to elaborate on what needed to be improved, saying vulnerabilities “could then be exploited by hackers and create additional risk for the commonwealth.”