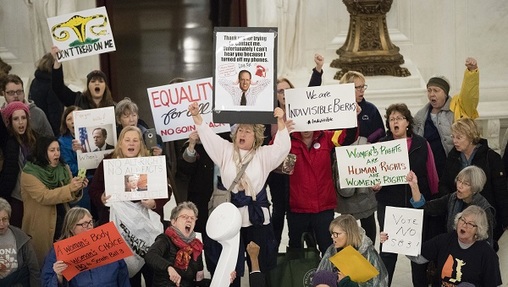 Pro-choice activists rally at the Capitol on budget day–the day before the Senate passed SB3. (Photo by AP)

Senate Bill 3 would make abortions illegal after 20 weeks of gestation, narrowing the threshold from the current 24 weeks with some exceptions for cases in which the health or survival of the mother is at stake. It would also significantly limit use of a common abortion procedure medically known as dilation-and-evacuation.

Medical experts have raised serious concerns about the bill. Legal onus for failing to follow the law would fall on the physicians that perform the banned procedures.

GOP Senator Michele Brooks, of Crawford County, is the chief sponsor. She centered her Senate floor testimony around graphic descriptions of a procedure she called “dismemberment abortion.”

“Currently in Pennsylvania, a live, six-month-old fetus can be ripped apart and left to bleed to death,” she told a Democratic opponent of the bill.

But representatives from nonpartisan medical organizations like the American Congress of Obstetricians and Gynecologists have said those claims are inflammatory and not based in fact.

In a statement, the ACOG said that the bill “sets a dangerous precedent by criminalizing medical practices, and prohibiting doctors from using their professional expertise to provide the best, evidenced based care to their patients.”

Philadelphia OBGYN Thomas Dardarian added that “the term ‘dismemberment’ is not a medical term. [It’s a] term to rile up the public.”

Dardarian said the procedure Brooks is referring to, dilation-and-extraction, doesn’t cause pain to the fetus–an argument sometimes espoused by supporters of bills like Brooks’.

“At 24 weeks, the fetus’s neurons are not intact, and there is scientific data to that point,” he said. “The other thing they don’t really tell you is that when this procedure is done, the women are taken to the operating room and they’re given a general anesthetic. They’re asleep. And that anesthetic does reach the fetus as well.”

Dardarian added that dilation-and-evacuation is unquestionably the safest abortion technique. He said alternative methods, like inducing labor, can cause complications for mothers’ physical–and often, mental–health.

“It just–it’s cruel and unusual punishment to do this to a woman,” he said.

The tensest moment of the floor debate came when Senator Lisa Baker, a Luzerne County Republican, broke party lines to oppose the bill, citing her own late-term pregnancy complications.

“This bill could compound the suffering of individuals who are going through the worst moments a mother can experience,” Baker said in her floor remarks, her voice breaking.

The bill’s sponsors have declined to hold public hearings. It now goes on to the House, where a version of the same bill saw success last session.

Some tentative optimism from GOP on Wolf's budget