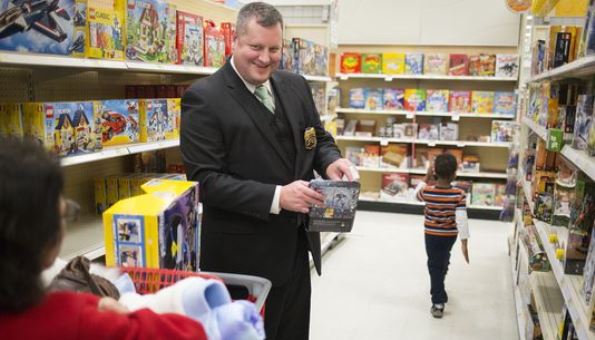 West York Borough Police Chief Justin Seibel, center, is no longer with the department. The council unanimously approved a separation agreement with him on Monday night. (Photo: Paul Chaplin, For the York Daily Record)

The council voted unanimously on Monday night to approve a separation agreement with Seibel to dissolve the employee and employer relationship. Seibel was placed on paid leave in September but was later suspended without pay on Oct. 31.

After the meeting, Mayor Shawn Mauck said he could not comment on why the parties have separated. He also said he could not give details about the terms of separation. As of Monday night, Seibel was no longer an employee.

Seibel and his attorney, Ed Paskey, were not present at the meeting. Paskey later issued this statement:

“I’m thankful we resolved the situation amicably for Justin and his family. He voluntarily offered to step down as Chief this summer, so the move shouldn’t come as a complete surprise. With the new composition of leadership, the Borough decided to move in a different direction. Justin felt that a change in environment was in the best interests of the department and the residents, as well as his own best interests. Justin is a dedicated public servant who enjoyed his time at West York. We appreciate the willingness of the Borough to reach a fair outcome.”

Matthew Millsaps has been serving as acting chief of the police department.

Mauck said the borough will open the position for police chief, but he plans to recommend that Millsaps be appointed to the helm. Mauck has suggested creating a public safety director.

“He’s done a terrific job as acting chief, but ultimately, council will have to make that decision,” Mauck said.

Mauck’s comment came after borough leaders and residents in the audience had a heated exchange about proposed changes with borough management.

The council made a motion to approve a resolution for the mayor to take over operational authority for borough employees that are unionized. It was being proposed mostly to alleviate some of the administrative duties so the borough manager could focus more on finances and other issues, councilman Alan Vandersloot said. He explained that it was an operational change that’s permissible under the borough code.

But some members of the public questioned the move, wondering if it was giving one person too much power. Why not give it to someone on council?

Some also pointed out that Monday night was the first time the issue was brought up.

That motion failed. Council then voted to hire a former police officer to help with administrative duties associated with the police department. But after Mauck looked at his phone, he said that person withdrew her name for the job.

The borough, Mauck said, is going to have to decide what process it wants to have for filling open positions.