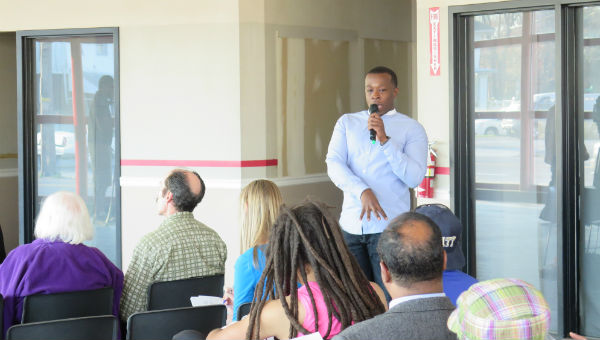 Harrisburg City Councilor Cornelius Johnson talks to audience members at a public meeting on the city’s proposal to decriminalize possession of less than 30 ounces of marijuana.

(Harrisburg) — Harrisburg’s City Council is considering a proposal to lower the penalties for minor marijuana possession.

Most speakers at the second of two public hearing’s this month called for lower fines than what’s on the table.

Many in the crowd of about 25 spoke in favor of the plan.

If you’re caught with 30 grams or less of marijuana in Harrisburg, you would face a traffic citation, instead of a misdemeanor charge and possibly a day in court.

If arrested for a third time, a person would face a misdemeanor charge.

Mike Crohn from Lemoyne says the overall policy change would be a good step, but city police could still arrest many people for possession of drug paraphernalia, which can carry higher penalties.

“Simple possession can be just thirty days probation and your employer doesn’t even have to find out about it. But when you’re doing a year or more, things are going to get a lot worse for you,” says Crohn.

“If we’re going to drop the paraphernalia part of it and only focus on the possession issues, that’s a step forward. I’d like to see that.”

Philadelphia and Pittsburgh have both approved a similar decriminalization law.

This story has been changed to note the change would apply to 30 grams or less or marijuana.