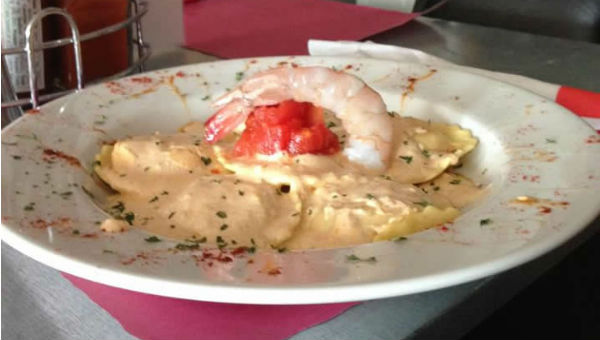 Crawdaddy’s started out in a storefront on Reily Street just off Third and last year moved to a spacious first-floor venue in The 1500 Condominium at Reily and Sixth streets.

The new space is different than Crawdaddy’s original home but is a wonderful spot for Crawdaddy’s style, which is fun, bustling and sometimes loud with live jazz.

Crawdaddy’s calls its cuisine “Southern comfort food with a New Orleans flair.” And while I can appreciate that not everyone likes such cooking, what I could never understand is why.

To me, Southern fare is a big part of Americana, full of bold flavors and deep-fried crunch. And even though it might not make it on the association of nutritionists menu of choice, I am a lifelong fan. Also, I’ve often noted that places serving Southern fare seem to be owned by and even employ people imbued with Southern hospitality — even if such places aren’t in the South.

Such is the case at Crawdaddy’s. The service is attentive, informed and, well, almost joyful.

But let’s talk about specifics and the menu. My visit was on a Saturday night, which means live jazz from 7 to 9 p.m. (And it was good, too.)

Now it can get loud, but the main dining room is large enough and has ceilings high enough to eat up a lot of noise.

The room is modern-looking, almost industrial, with lots of glass, nicely spaced seating with linens, candles and Mardi Gras beads on every table.

During my visit, the restaurant was BYOB, but a state liquor license application was pending.

I started with fried green tomatoes, four nice slices served with Louisiana-style remoulade sauce along with wonderful piping-hot cornbread. The tomatoes were perfect: crunchy on the outside, not dried out on the inside. Nicely priced at $6.

A dinner mate ordered sweet potato fries, just $5, jokingly complained at the overly large size of the serving and then proceeded to down the dish. Other creative starters included catfish nuggets, crawfish beignets, chicken and shrimp gumbo, gator nuggets and black-eyed peas humus. Almost all appetizers are in the $5 to $7 range.

For an entrée, I could not resist the lure of the rack. I devoured a half-rack of baby back ribs ($17.50) that were as moist and tender as any I’ve eaten. These were basted with a spicy sauce and served with a side of collard greens. 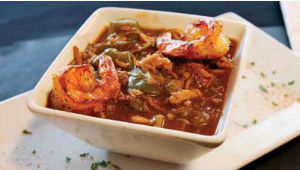 All entrées come with two sides such as macaroni and cheese, pinto beans and rice, grilled asparagus and various potatoes. But I was too filled up on cornbread to think about a second side.

My dining partner seemed tempted by the crispy cornmeal-dusted catfish, but went instead with a blackened salmon entrée ($18) that also drew raves for its preparation and taste.

Don’t like the entrée choices? Don’t want to eat that heavy? Well, you’ve come to the right place. Crawdaddy’s also offers a number of dinner-sized salads: Cajun Caesar, blue cheese steak, barbecued salmon, to name a few. All are under $15.

There’s also a menu section called “French Quarters,” offering etouffee, jambalaya, roasted garlic shrimp with black-eyed peas and (a personal favorite) shrimp and grits, Creole style. “French Quarters” items are priced from $14 to $17 and arrived with a side salad.

This is the kind of place and the kind of menu that can and should mean many repeat customers. It’s easy to feed two very well for under $50, much less if opting for “lighter fare” or “French Quarters.”

I know I wanted more than I could eat. And I know I’ll be back. Crawdaddy’s isn’t your normal Central PA eatery. And its very existence, plus the scope of its offerings, represents bold ambition here. But it’s a restaurant that’s good for the region, good for the city and good for those who enjoy (or would like to be introduced to) Southern comfort food with flair.

Y’all should go there, hear?

A little-known midtown Harrisburg place that opened in 2012, then moved to a more visible venue in 2013, is among your Phantom’s favorite finds and a top-of-the-list recommendation to start off 2014.

The Phantom Diner has been a longtime restaurant reviewer for Central PA Magazine.