Pauline Bauer, Pa. woman who called for Nancy Pelosi to be hanged during Jan. 6 attack, guilty on all counts

Pauline Bauer, who shouted at police to “Bring Nancy Pelosi out” to be hanged, has been convicted of obstruction of justice or Congress and other charges for her role in the Jan. 6, 2021, assault on the U.S. Capitol.

Bauer, from Kane in McKean County, Pa., claimed immunity from U.S. law as a “sovereign citizen” – a reference to an ideology whose participants use “a variety of conspiracy theories and falsehoods to justify their beliefs and their activities, some of which are illegal and violent,” according to the Southern Poverty Law Center.

Surveillance footage shows Bauer and another person in multiple places inside the Capitol. Body camera video from law enforcement recorded Bauer telling officers, “Bring them out… We want them out here… Bring Nancy Pelosi out here now. We want to hang” her. 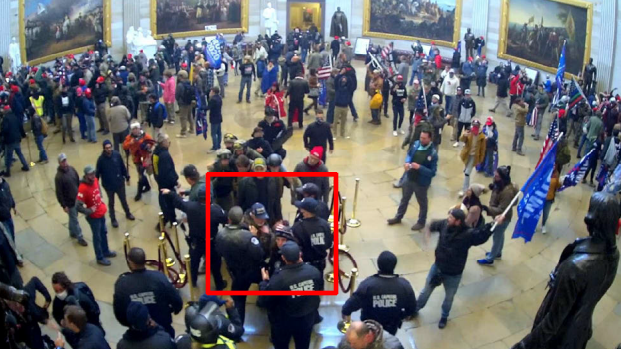 Six people alerted the FBI about Bauer, and she was arrested on May 19, 2021 and charged in June, according to Department of Justice records.

Bauer is expected to be sentenced in May.

The rioters drove Congress from its chambers in an effort to keep former President Donald Trump in power — despite his 2020 election loss. They delayed, but did not prevent, certification of Joe Biden’s electoral victory.

At least 76 Pennsylvanians are among the nearly 1,000 who have been arrested for participating in the violent attack on the Capitol.

The figure is second highest of any state in the country, behind only Florida.