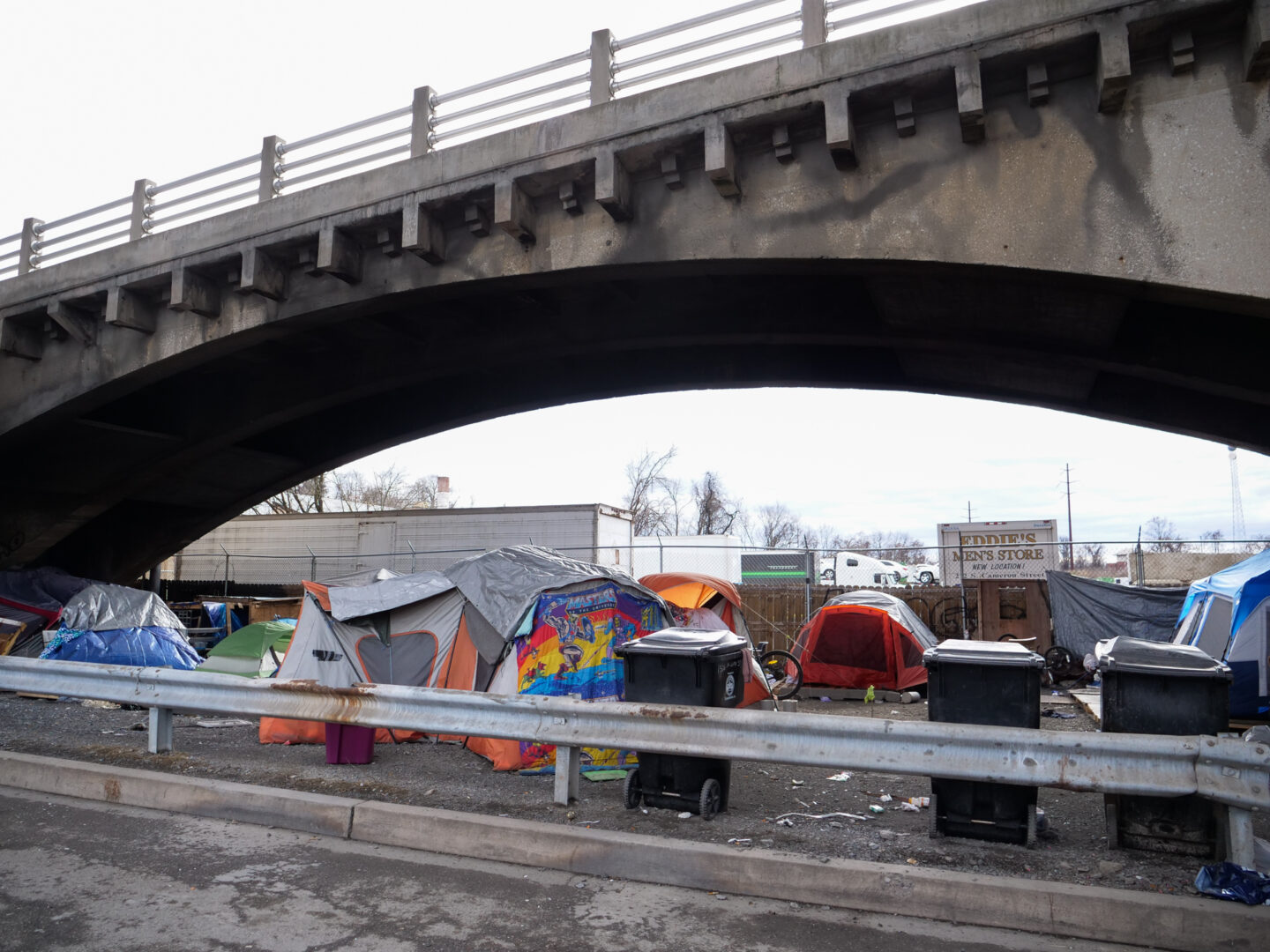 Shawn has lived in tent communities under the Mulberry Street Bridge for about three years. On Friday, he was putting out the remnants of a fire next to his tent with a shovel and cleaning out his campsite. He was one of several people still living there as a city deadline to leave loomed.

“We had everything the way we wanted it, and now it’s turned upside down,” said Shawn, who did not want to give his last name. “Now we gotta go somewhere else in the neighborhood. Who’s to know how they’re going to take it? Are they going to want a bunch of homeless people going across the street or something? You know what I mean? It’s just the way it is.”

Shawn says there are people who have lived under Mulberry Street Bridge for up to six years. 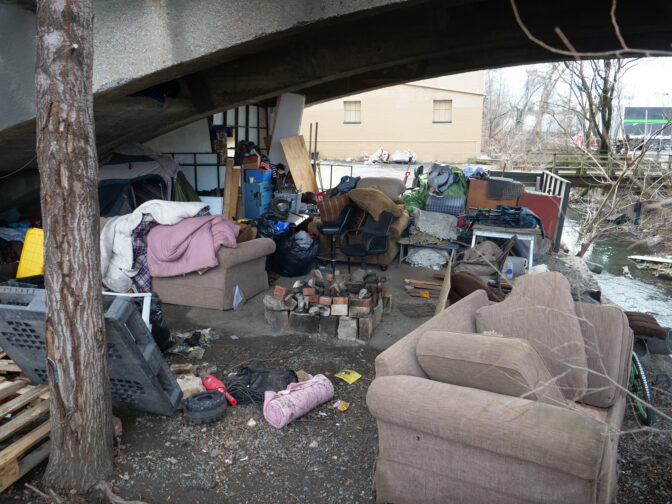 The City of Harrisburg had ordered him and everyone who lived in the encampment to be out by Sunday. Shawn, who needs medical treatment for a bone infection above his ankle, says he is concerned a new temporary encampment will be farther from downtown homeless services, the hospital and transportation.

“We obviously don’t have vehicles,” Shawn said. “We’ve got to walk extra, and that’s a big inconvenience.”

On Friday, Shannyn Snell and her partner were loading plastic containers into the van of a charity that was helping them. She said they had no clue where they were going.

“My anxiety is off the charts, and it’s driving me nuts. It’s like we’re being pushed out. You know, and you don’t know what to do.  We’ve all cried and it’s overwhelming,” Snell said. She moved to the Mulberry Street Bridge encampment recently, after she says she was sexually assaulted at a camp near the PennDOT building on Front Street.

Snell says the city needs to do more to help unhoused people. She suggested building huts or temporary housing, so people do not have to rely on finding shelter in tent cities. 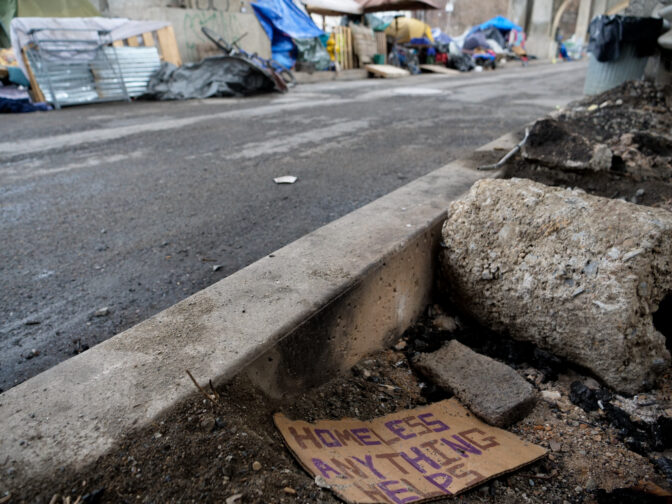 On Monday, the city said sanitation workers would clear out the site on Tuesday. City spokesman Matt Maisel said the city and nonprofit partners were working to relocate five people still at the site. Most residents moved to the Front Street camp.

Dennise Hill, City of Harrisburg Director of Building & Housing Development, said the city and advocates for the homeless are working one-on-one with residents who are are hesitant to leave or have transportation barriers.

“It’s not about us pushing people out or relocating,” Hill said. “We are actively working with individuals to find the resource that works best for them, and that’s a number of things – rehab, temporary shelters, relocating out of state back to their families so some of them have homes to go to, and they are choosing to go back to them.” 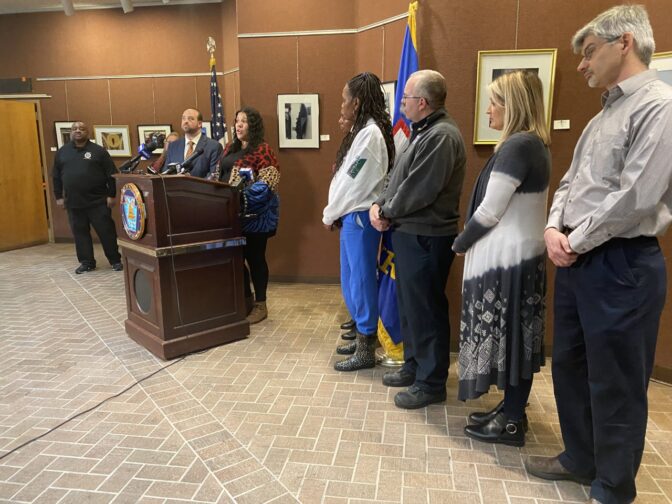 Homeless services providers and city officials gathered at Harrisburg City Government Center to provide on update on the efforts to relocate residents living under the Mulberry Street Bridge.

Regardless of people’s final decision on where to go, the city still intends to clean the area. The first step will be to remove the trash and personal belongings left behind – a process that will take about 48 hours, Maisel said.

Later, an exterminating company will set up traps and rat poison. Maisel said it will take about six weeks for the area to be safe again.

The city says it cannot legally keep people from returning to the area after Public Works deems the area to be safe.

The city has set up a temporary encampment about a mile south on Cameron Street near Steelton. That site has portable toilets, and is close to public transportation. The city and nonprofit partners are offering free bus passes to the people living there.

Maisel said they wanted to find a safer location for people while they work with human services nonprofits to find more stable housing.

Last week, the city relocated about 10 people to the new temporary encampment, but as of Monday morning none of those residents had left, according to Hill. The city will take that encampment down once the cleanup at the Mulberry Street Bridge location is completed.

Hill said homeless service providers partnered with the city were able to help relocate about 70 people living under the Mulberry Street Bridge.

The city decided to clear out the site to help control a rat infestation caused by the high accumulation of trash in the area.

According to Maisel, police were called to the site 16 times for criminal activity that resulted in arrests. Six assaults and three drug overdoses were investigated at the location.

“Doing nothing in this instance was absolutely not an option. None of this is stuff we wanted to do, but we had to do it for the health and safety of everyone involved, including the individuals who live in the encampment,” Maisel said.

Hill, who is also board chair for the Capital Area Coalition on Homelessness, says the city is looking at different solutions to address homelessness and lack of affordable housing, including construction and renovation of buildings to use for affordable housing, workforce development so that people can get jobs that allow them to afford housing and advocating for legislation to impose rent caps.

“There is funding available to create new homes through different organizations. At this point, there isn’t anything specific. There is a proposal to add to that construction for other organizations, but it is only proposed at this time and has not been approved,” Hill said.

How communities in north-central Pa. are attempting to preserve a scarce resource: darkness