Hilltop Pharmacy, in Pittsburgh’s Allentown neighborhood, is no longer an in-network drugstore for Pennsylvanians with UPMC insurance purchased on the Pennie exchange. 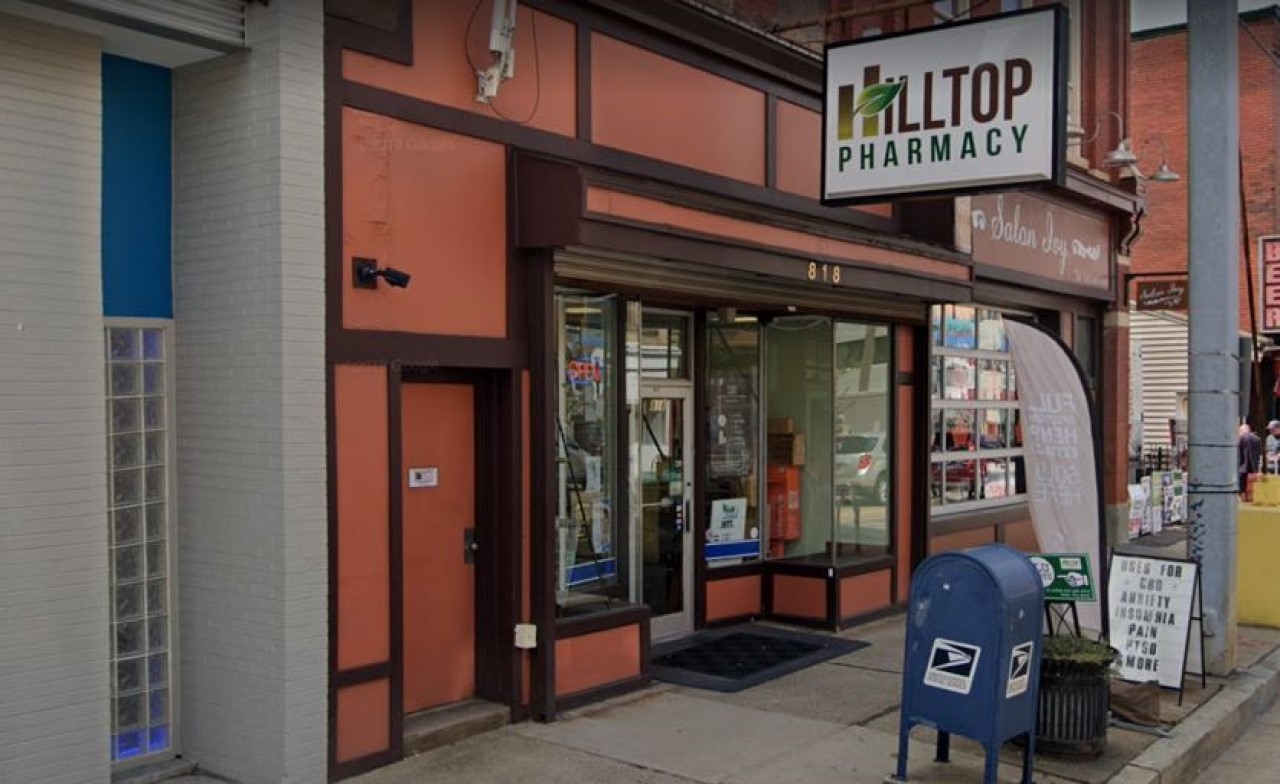 Hilltop Pharmacy, in Pittsburgh’s Allentown neighborhood, is no longer an in-network drugstore for Pennsylvanians with UPMC insurance purchased on the Pennie exchange.

As the clock ticked past midnight into New Year’s Day this year, thousands of Pennsylvanians lost insurance coverage for prescriptions at their corner drugstores.

On Jan. 1, UPMC Health Plan narrowed pharmacy coverage for individuals and employers who bought plans through the state-run health insurance exchange, known as Pennie. UPMC said it dropped roughly half of pharmacies from its Pennie network; the Pennsylvania Pharmacists Association estimates the figure approaches 70%.

UPMC and the pharmacy association are scheduled to meet next week, along with the Pennsylvania Health Care Association and Philadelphia Association of Retail Druggists. Pharmacy association president, Pat Lavella, said he could not understand why UPMC’s network includes certain drugstores within his trade group but excludes others.

“There was no rhyme or reason. We couldn’t narrow it down to where they were located,” he said. “We had owners who had multiple pharmacies, [and] one of their pharmacies was in and maybe two others weren’t.”

Lavella owns Hilltop Pharmacy in Pittsburgh’s Allentown neighborhood. He said some of his customers lost UPMC coverage at his store. He worries the newly constrained network fits into a broader trend of consolidation in the pharmaceutical industry. While UPMC says the shift will lower the cost of insurance by promoting efficiency, Lavella warned it will soon force independent businesses like his to close their doors.

Among large chains, RiteAid, Giant Eagle, Sam’s Club and Walmart all remain in UPMC’s Pennie network; Walgreens and CVS are out. Lavella noted the insurer retained some independent locations, but based on conversations with dozens of pharmacy owners, he believes the number is low.

Between a rock and a hard place

UPMC would not say how much money the narrowed Pennie network will save consumers; but chief pharmacy officer Chronis Manolis noted that pharmacy services comprise up to 30% of a benefit package’s costs.

“The basic premise is that it’s a smaller amount of pharmacies, and more [customers] will go into [each of] those pharmacies,” he said of the restricted network. “It’s all about lowering the premiums. And when you look … around the country, narrowing networks [is] one of the levers that we have left in pharmacy.”

Insurers achieve lower premiums by slashing the rates at which they reimburse pharmacists for dispensing drugs. The thinking goes that the in-network pharmacies can make up for lower fees by increasing volume, including attracting patients from the excluded drugstores.

Even though UPMC has already cut the number of pharmacies with which it contracts for Pennie coverage, it has offered to reinstate ones that accept the lower reimbursement rates that now apply to the whole network. So, pharmacists who wish to rejoin or remain with the network face a “Catch-22:” Accept lower payments from UPMC or say goodbye to customers.

Lavella said UPMC has offered to reimburse pharmacies at rates that are 5% or 6% below cost for many prescriptions, which he believes would force them to run at a loss: “If my pharmacy was in this network, and you came in and handed me a prescription for a $500 inhaler, I would be better off just to hand you the prescription back and hand you $25. I’m doing the same thing.”

It’s unclear how much this change will impact pharmacies’ bottom lines. The new network applies only to Pennsylvanians who purchased UPMC insurance on Pennie, which included some 114,000 Pennsylvanians in 2021. UPMC estimates that 15% of these consumers will need to switch pharmacies. If 2023 enrollment numbers are roughly the same as in 2021, approximately 17,000 people will need to change providers.

It’s unlikely that UPMC’s pharmacy strategy will harm consumers, said Amanda Starc, who studies health care markets at Northwestern University’s Kellogg School of Management: “My guess is that for folks that are buying through the [Pennie] exchange … they probably care more about premiums than folks who have coverage through an employer. So keeping costs down is especially important.”

Pennsylvania created Pennie in response to the Affordable Care Act, which aims to make health insurance more affordable — particularly for Americans who are self-employed or have low incomes. According to Pennie, nearly 90% of people who purchase through the exchange qualify for subsidies that lower monthly premiums.

UPMC’s Manolis said the narrow network meets Pennie customers’ demands. Like Starc, he described the group as more sensitive to premiums than individuals who have health insurance through their employers.

“I don’t get many calls from people saying, ‘Please raise my premiums,’” he said.

While Manolis asserts the decision to narrow the Pennie network rests with UPMC, it carried out the move through its relationship with Express Scripts — one of the three largest pharmacy benefit managers, or PBMs, in the U.S. Together, Express Scripts, OptumRx and CVS Caremark control 80% of the pharmaceutical drug market.

PBMs are silent middlemen: They negotiate on behalf of health insurers with both drug companies and pharmacies. If a drug maker sets a high price for a medication, a PBM can push back by keeping the medication off its list of covered drugs and instead steer its patients to a rival product. On the other end of the transaction, a PBM can pay lower reimbursement rates to pharmacies, meaning insurance companies pay drugstores less to supply medication.

Conti said PBMs have been shrinking pharmacy networks in more populated areas for more than a decade, so she’s not surprised the trend has reached Western Pennsylvania.

But the system is opaque: There’s no way to know how much of the savings are passed onto consumers or are pocketed by PBMs, or insurance companies.

“[PBMs] are really in the center of this really complicated prescription drug supply chain. And so, how the money flows and what the contracts look like … it’s very hard for any regulator or any consumer advocacy organization, or just like an ordinary individual to know what’s going on,” said Erin C. Fuse Brown, director of the Center for Law, Health & Society at Georgia State University College of Law.

The lack of transparency with pharmacy benefits managers has previously drawn scrutiny from Pennsylvania officials, though mostly for their use in the state’s Medicaid program rather than for their impact on non-Medicaid consumers. Former Pennsylvania Auditor General Eugene DePasquale advocated repeatedly for greater oversight of the entities, and state lawmakers passed a bill last year to empower the state auditor to review the Medicaid program’s PBM contracts more closely.

Pittsburgh-area state Rep. Nick Pisciotanno says he and his Democratic colleagues have begun to explore how to beef up oversight more broadly.

“Once we kind of figure out what options are on the table, then we decide what tools we’ll pull out of the toolbox,” he said. “What can we work with the Shapiro administration on? … What can we do legislatively to ease the burden of some of these [changes in coverage] on average Pennsylvanians?”

On the national level, Iowa Sen. Charles Grassley, a Republican, has proposed a bill that would require PBMs to pass on a percentage of savings to consumers. As Bloomberg Law reports, Grassley’s proposal also expands the Federal Trade Commission’s oversight and gives state attorneys general the power to seek civil penalties for violations of the commission’s mandates.

UPMC’s reduction in coverage for Pennie customers will not only impact Pittsburghers but also Pennsylvanians in rural areas such as Bedford County or Cameron County, which border Maryland and New York, respectively. The plan won approval from the state’s Insurance Department, in part because the new network meets legal requirements to cover pharmacies within a 20-mile or 30-minute drive of most insurance plan members.

Walgreens and CVS are unlikely to feel much of a sting from losing UPMC’s Pennie customers, as they are large national chains. On the other hand, Lavella, the owner of Hilltop Pharmacy in Pittsburgh, worries the newly configured network will force mom-and-pop businesses to shut down.

He said lower reimbursement rates put him in an impossible position. If he rejects them, he said, “I’ve narrowed my patient base to the point that I probably cannot stay in business. And yet, accepting [those rates] means I’m not in business.”

The change also reduces consumer choice. It already has for Mt. Oliver resident Nathan Ruggles, who is self-employed. He buys health insurance through Pennie and fills his prescriptions at Hilltop, located a five-minute drive from his home. In November, he learned that UPMC had canceled his drug coverage at the drugstore. The insurer said in a letter and voicemails to Ruggles that the change would lower costs for consumers.

“They can tell me whatever they want to tell me, but it doesn’t change the fact that they took away my pharmacy,” he said. “How come those of us who have purchased our policies through Pennie are now somehow sort of second-class citizens that have more limited options to where we purchase our health insurance?”

Lavella predicts UPMC will eventually restrict networks for other plans, too, in the march toward market consolidation. This is a concern that Georgia State health law expert Fuse Brown shares, as many PBMs are owned by health insurance companies. For example, the PBM CVS Caremark is part of the same conglomerate that owns CVS pharmacies, CVS MinuteClinics and the insurance company Aetna.

“Maybe this narrowing of the pharmacy network and cutting out independent pharmacies from the network is really just a way to keep all of the patients in these plans for themselves … even if it doesn’t result in better prices [for patients],” said Fuse Brown.

Still, it’s premature to say whether UPMC’s slimmed-down Pennie network marks the beginning of the end for Pennsylvania’s independent pharmacies, said Boston University’s Rena Conti. She recalls while living in Chicago about a decade ago that PBMs decided to downsize pharmacy networks for that city. It’s true that some independent pharmacies faced more competition and financial pressures, and some patients were harmed by the change — but it also wasn’t the end of the world, Conti said.

“I just would say I’m being cautious of ‘this is Armageddon,’” she said. “Health care, it’s complicated. And it’s also much more nuanced than really simple headlines.”