"The term is a data void. We've seen this trope applied over and over again, not just to athletes, but any sort of celebrity malady," 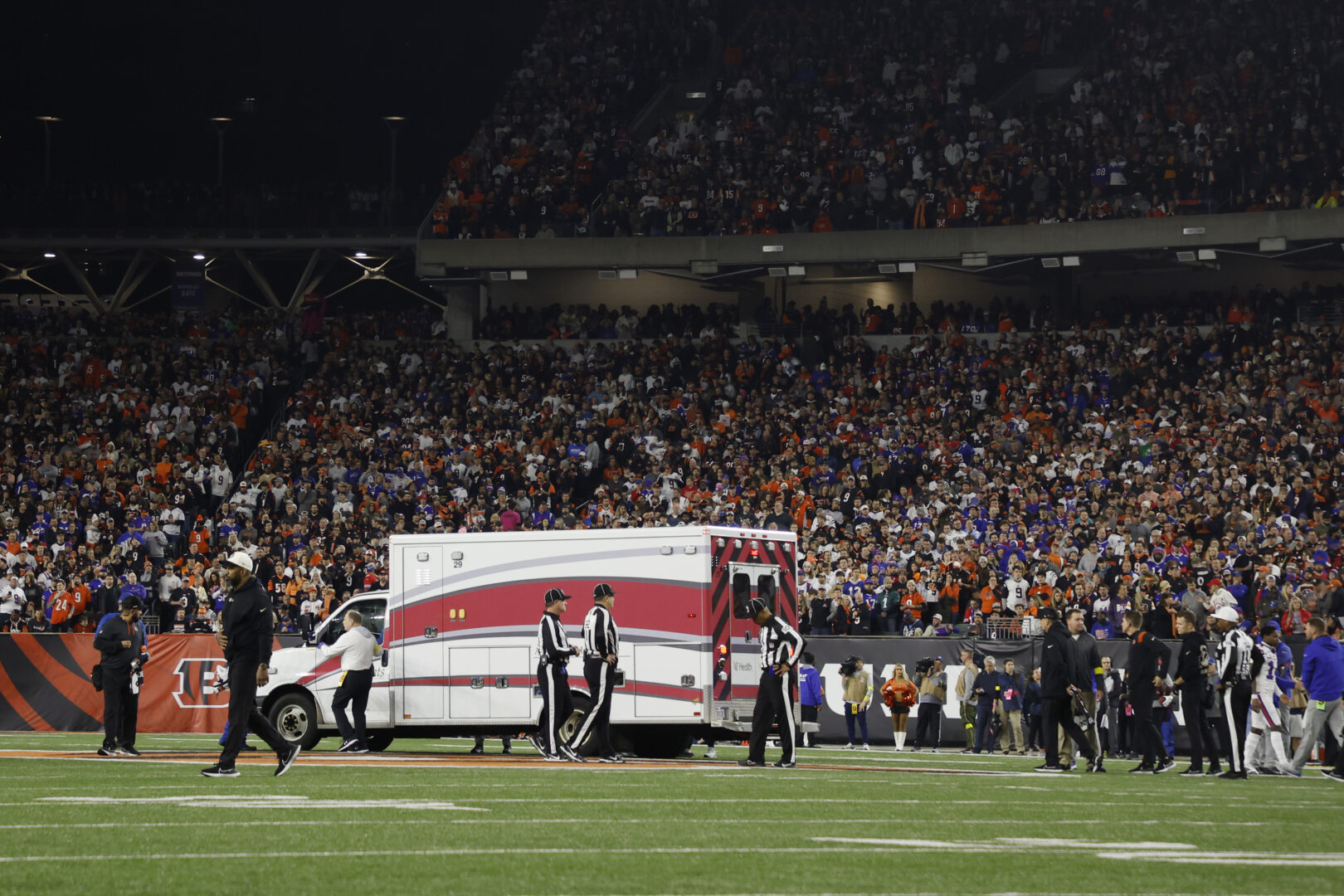 Last week more than 23 million people tuned in to watch the Buffalo Bills play the Cincinnati Bengals and instead became witness to a terrifying, life-or-death emergency as safety Damar Hamlin collapsed suddenly on the field. His teammates knelt in prayer while medical staff fought for his life. (According to doctors, Hamlin is “doing well” and was released from a hospital in Cincinnati and returned to Buffalo on Monday, where he is now in stable condition.)

But on the internet, anti-vaccine activists filled in the silence with unfounded theories that Hamlin’s collapse was brought on by COVID vaccines.

“The term is a data void,” said Kolina Koltai, a misinformation and social media researcher who until very recently, worked for Twitter. She too was watching the game and immediately braced herself for incoming anti-vaccine narratives.

“We’ve seen this trope applied over and over again, not just to athletes, but any sort of celebrity malady,” said Koltai.

The misleading claims were quickly picked up by the far-right, most notably with a post from activist Charlie Kirk, who wrote in a tweet. “This is a tragic and all too familiar sight right now: Athletes dropping suddenly,”

The next day, Fox News host Tucker Carlson followed up with a segment echoing the misleading claim that young athletes are collapsing at alarming rates since COVID vaccines became widely available.

While Carlson and Kirk are among the most well-known figures to promote misleading claims about Hamlin’s cardiac arrest, a host of less prominent anti-vaccine influencers, many newly returned to Twitter, mobilized alongside them. 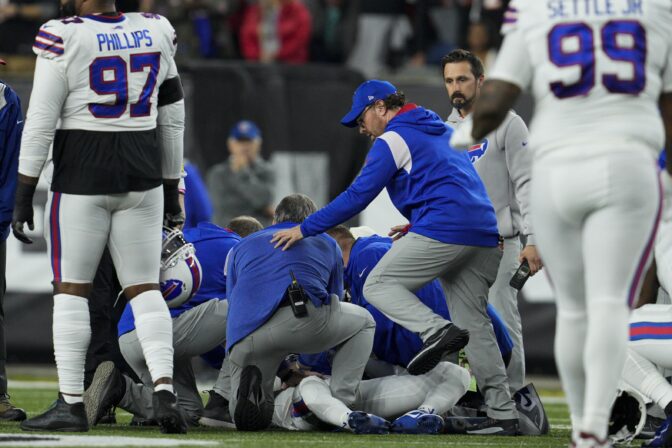 Buffalo Bills’ Damar Hamlin is examined during the first half of an NFL football game against the Cincinnati Bengals, Monday, Jan. 2, 2023, in Cincinnati.

Dog whistles are hard to moderate

In the months since billionaire investor Elon Musk bought Twitter in October, the company has fired content moderators, stopped enforcing its policy on misleading information about COVID-19 and implemented a “general amnesty” of tens of thousands of accounts that had been previously banned or suspended for breaking the site’s rules.

But even before Musk’s takeover of Twitter, Koltai says the easily veiled language of vaccine disinformation often evaded moderators’ attempts to contain it. She says Kirk’s tweet is a good example.

“You’re not violating any content moderation policy, but you are implying it,” she says, “which is why the larger, widespread dissemination of anti-vax ideology has been so dangerous.”

The impacts of vaccine-related mis- and disinformation don’t hit all at once, Koltai explains. They grow over time with repeated exposure. Hamlin’s collapse happened to follow a recent period of heightened activity from anti-vaccine influencers. In late November, a documentary-style film called Died Suddenly premiered full of debunked claims about supposedly-vaccinated people dying from blood clots.

Anti-vaccine activists have several advantages over more credible sources. They have a huge supply of existing narratives to fold current events into. In addition, Koltai says spreaders of misinformation have speed on their side. A week after Hamlin’s collapse, his doctors have yet to determine exactly why his heart stopped.

“You can immediately start making this link between vaccines and it won’t be until days if not weeks later that you’re able to have scientific proof – like this is because of X, Y, Z, not because of the vaccine,” says Koltai. By the time medical professionals and journalists catch up, the damaging messages have already made the rounds.

Long before the COVID pandemic supercharged anti-vax narratives, Koltai says, the practical details of moderating online forums where people share articles or personal fears about vaccine injury were always touchy. But those examples rarely had the reach of a primetime sporting event. 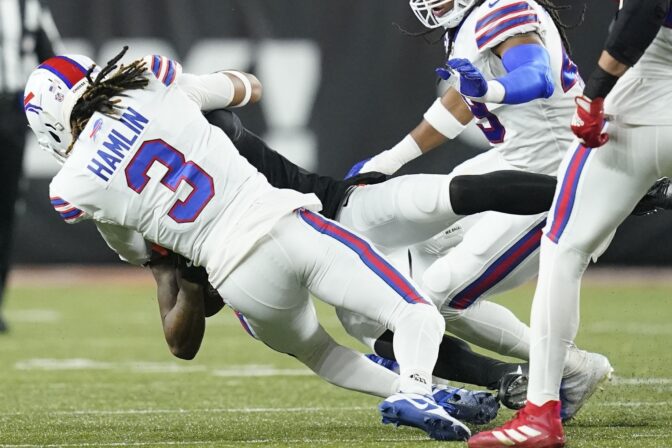 Cincinnati Bengals wide receiver Tee Higgins (85) collides with Buffalo Bills safety Damar Hamlin (3) during the first half of an NFL football game, Monday, Jan. 2, 2023, in Cincinnati. Hamlin was injured on the play.

A cycle of trauma

About a month before Hamlin’s collapse, during the soccer World Cup, vaccine conspiracies began to swirl around the sudden death of sports journalist Grant Wahl, who was covering the tournament in Qatar.

His wife of 21 years, epidemiologist and infectious disease physician Celine Gounder had grown accustomed to receiving threats and ugly messages for years because of her work, which included advising the Biden administration on COVID-19. But she quickly began to face an onslaught of even more personalized attacks as news of her husband’s death spread.

“This is one of a few hundred, actually, as well as voicemail messages and other kinds of harassing messages. But this particular email blamed me for having killed my husband because he got COVID vaccinations,” Gounder told NPR’s Juana Summers in an interview on All Things Considered.

In her grief, she put out a written statement about Wahl’s death, sat for media interviews and eventually published the results of her husband’s autopsy, all in the hopes of ending the speculation of strangers.

“But unfortunately, the Damar Hamlin incident really did kick things back up,” Gounder says.

She says she understands the deep human impulse to want answers in the face of a sudden shocking event, but says spreaders of disinformation use an established playbook to exploit the tragedies of families like hers.

“Disinformation is a business model. Make no mistake about it. And these are people who are trying to make money, who are trying to gain social media followers or subscribers on substack or some kind of social status or power. And that really is just retraumatizing, not just me and my family, but others who have been victims of this kind of behavior,” says Gounder. 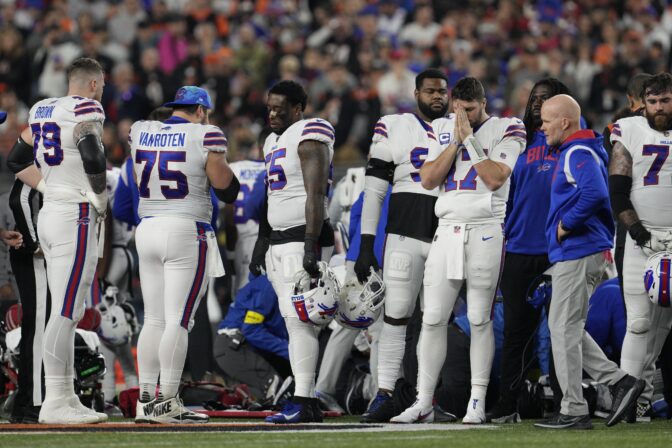 Buffalo Bills quarterback Josh Allen (17) pauses as Damar Hamlin is examined during the first half of an NFL football game against the Cincinnati Bengals, Monday, Jan. 2, 2023, in Cincinnati.

While Hamlin’s collapse and Wahl’s death played out in U.S. social media circles, anti-vaccine falsehoods have been spreading rapidly around the world, said Peter Hotez, a pediatrician and vaccine scientist at Baylor College of Medicine.

“The U.S. is good at exporting its culture. We export music. We export our movies. We’re now exporting this,” says Hotez. He’s watching American rhetoric around “medical freedom” take hold in Canada, Western Europe and beyond.

“You’re starting to see the anti-vaccine lobby attack the introduction of new malaria vaccines on the African continent, using the same kind of phony baloney arguments,” he says.

Hotez is particularly concerned with the evolution of anti-vax narratives once used to sell books and nutritional supplements becoming part of a broader political platform that attracts far right groups like the Proud Boys and portrays scientists like himself as “enemies of the state.” He reserves some criticism for his own biomedical community’s insistence on not doing more to confront vaccine conspiracism head on in the early 2000s.

“The Department of Health Human Services, for years, would keep saying to me: ‘Peter, we’re not going to talk about this because you’ll give it oxygen,” says Hotez. He believes that unofficial policy had an enabling effect, and helped lead to our current moment, when virtually any visible health scare or death can be weaponized by anti-vax activists.

“This is an entire anti-science political ecosystem now, and it’s very frightening and very destructive.”