More than 1,000 people have had their blood tested for the so-called “forever chemicals” to help scientists understand more about the health effects of the class of chemicals found in several products.

Residents in Montgomery and Bucks Counties are learning more about their exposure to toxic PFAS chemicals.

More than 1,000 residents so far have had their blood tested for the so-called “forever chemicals” to help scientists understand more about the health effects of the class of chemicals found in products such as non-stick cookware and waterproof clothing.

The study, funded by the Centers for Disease Control and Prevention, began more than a year ago across seven sites in the U.S. The agency says those exposed to PFAS have a higher risk for high cholesterol, kidney cancer, testicular cancer, and damage to the immune system. The health risks have led to dozens of lawsuits against companies like DuPont, which manufactured the chemicals.

Residents who have lived near former and active military bases in Horsham, Warminster, and Warrington were encouraged to submit blood samples. The areas have a history of PFAS contamination in drinking water, because of the use of fire-suppressing foam, which also contains the chemicals. Though efforts have been made to address the contamination, studies show that certain types of PFAS can remain in the body for a number of years. 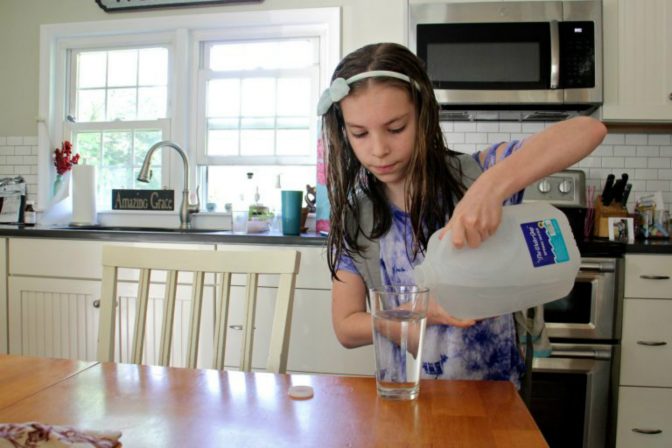 “Everyone that lived on the street that I was on had a serious health issue, whether it was a cancer issue or if it was some serious issue that just didn’t add up,” said study participant Chris Martindell, who has lived in Warminster most of his life.

Interest in the Montgomery and Bucks study was so high that researchers increased capacity from 1,000 to 1,500 adults, and extended the application process until May. Recruiting children has been more challenging, however, with researchers meeting only 23% of the goal of 300 children.

Martindell is one of the 53% of study participants who have received their test results — his results were particularly high. Martindell hasn’t brought himself to read them in detail, which would outline potential health risks.

“I’m just frustrated that, A, no one wants to take the blame for it, and B, nobody wants to say, ‘Here’s how we fix it,’” he said.

“If [physicians] have these levels on file, and they know that these are potentials, I think patients can get treated faster, they can get diagnosed sooner,” Cassidy said.

Other study participants, like Jill Florin of Dresher, thought the results were too vague, however.  Florin’s PFAS levels are considered “moderate,” which means she should get screened for dyslipidemia and breast cancer. Florin didn’t find her results helpful, because these screenings are standard protocol for most people who see a primary care physician regularly.

“You have this piece of information, and what do you do with it?” she said.

The Environmental Protection Agency has promised to enforce restrictions for PFAS, and are expected to implement Maximum Contaminant Levels — or MCLs — for the chemicals in drinking water. That would require providers to maintain PFAS levels below a certain amount. States like New Jersey have already set their own MCLs.

Florin believes that until MCLs are established, water providers should take a stronger stance when it comes to eliminating the chemicals.

“It does upset me,” she said. “We’ve known this now for how long? And it’s not going away, and it’s in the water. And until it’s zero, then they should be doing something to make our water safer.”

As for Cassidy, she hopes the CDC study will lead to more PFAS restrictions nationwide.

“We just cannot let this happen to another generation,” she said. “We have to do something about eradicating and not using these types of substances.”

People interested in participating in the PA PFAS Multi-site Health Study can call (877) 267-2890 or papfashealth@rti.org