Some mountain trails in the city of Phoenix are open before sunrise and after sunset to encourage hikers to avoid the heat of the midday. A large body of scientific research shows that climate change is making heat waves more severe. Communicating about that climate connection while a heat wave is still underway can affect peoples' attitudes about climate change more broadly.

Climate change is making the weather more severe. Why don’t most forecasts mention it? 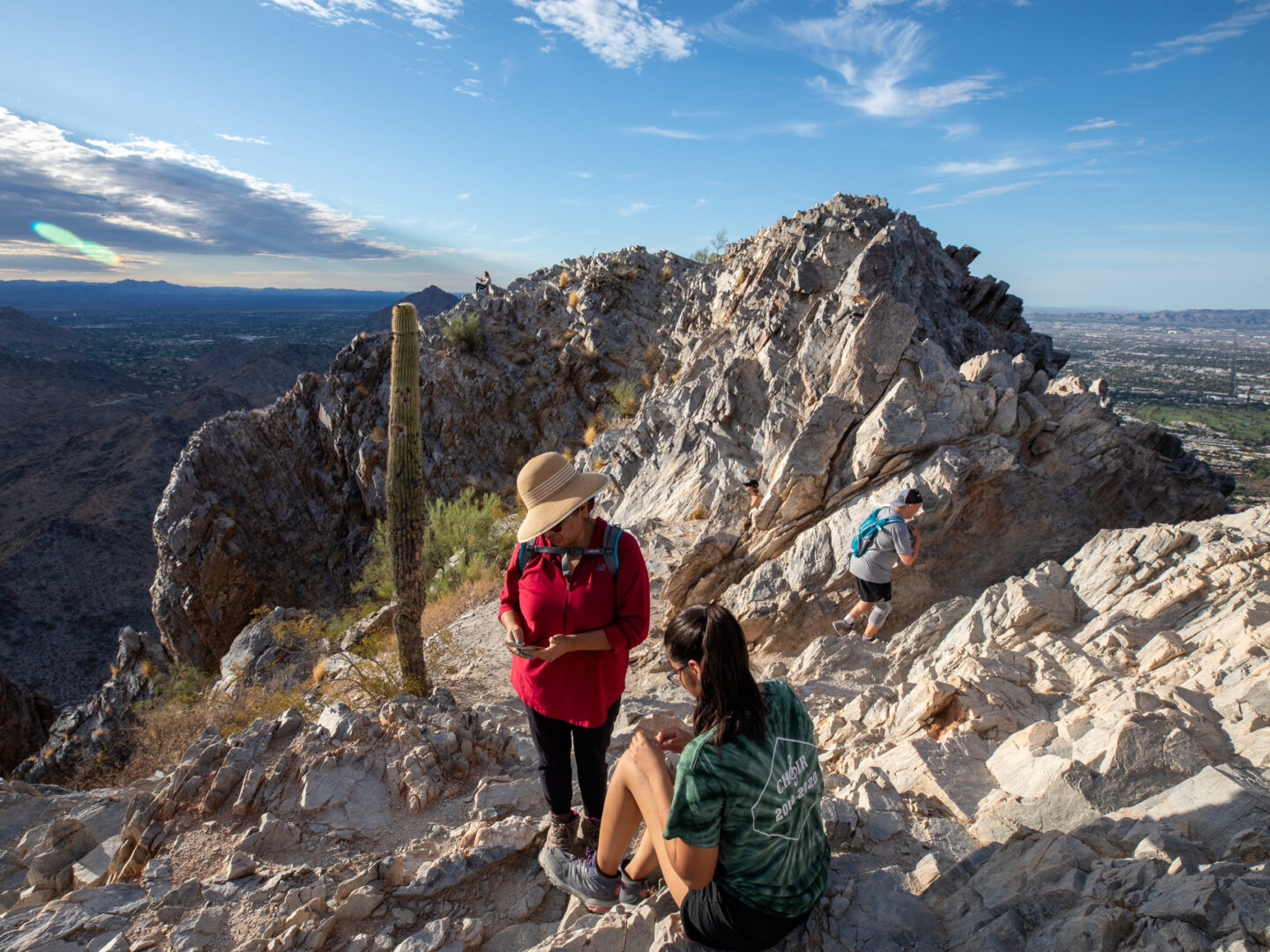 Some mountain trails in the city of Phoenix are open before sunrise and after sunset to encourage hikers to avoid the heat of the midday. A large body of scientific research shows that climate change is making heat waves more severe. Communicating about that climate connection while a heat wave is still underway can affect peoples' attitudes about climate change more broadly.

At global climate talks that just wrapped up, one of the few areas of agreement was about the worldwide toll of climate-driven weather disasters.

Leaders from Pakistan and Kenya, Senegal and the Bahamas connected the dots between a hotter Earth and devastating floods, storms, heat waves and droughts. And in a speech at the conference, President Joe Biden said more severe hurricanes and wildfires are wreaking havoc in the United States.

That connection between extreme weather and climate change has never been clearer, thanks to an area of science known as extreme-event attribution. It allows scientists to describe exactly how much worse a specific flood, heat wave, hurricane or drought is because of human-caused global warming.

But that science is largely missing from public weather forecasts that millions of people in the U.S. rely on. As severe weather gets more common, scientists and forecasters are contending with a sneakily difficult question: How do we work together to explain the role of climate change?

It’s mostly the scientists who do the talking

But when a disaster is unfolding, the official weather forecasts from the federal government don’t include information about how climate change is making the disaster more severe or more likely, even when the connection is well-established by previous studies. The forecasts that most people get on their phones or through television broadcasts are based on official government information.

If they did include climate context, weather forecasts for hurricanes might mention how sea level rise or warmer ocean temperatures could make the storm more severe than storms in the past.

Similarly, official updates on drought conditions might mention how global warming contributes to longer, more severe droughts. Or heat wave warnings from the National Weather Service could include information about the strong, well-established connection between a hotter Earth and dangerously hot days.

Instead, information about that connection comes from researchers, often weeks or months after the disaster happens.

But scientists may not always be the best messengers. Research has found that television meteorologists can be some of the most authoritative voices for lots of people on the connection between climate change and weather.

And federal forecasters, such as those at the National Hurricane Center, could also be effective messengers for climate information, says Michael Wehner, a climate scientist at Lawrence Berkeley National Laboratory who studies extreme weather. “Confidence in these statements would be considerably higher,” he argues, if they were coming as part of forecasts and warnings that people already trust and turn to when a storm is bearing down.

But including climate context in real-time weather warnings is easier said than done, says Sarah Kapnick, the chief scientist at the National Oceanic and Atmospheric Administration (NOAA). Kapnick has a background as a research scientist, and has worked on extreme-event attribution studies.

“When an extreme event is happening, NOAA’s National Weather Service has a singular focus on protecting lives and property,” she explains. Forecasters do their best to answer questions about the role of climate change in whatever disaster is unfolding, she says. But “they don’t necessarily know all the science about climate change, and they’re not active in doing that type of analysis,” explains Kapnick.

Instead, NOAA scientists separately put out information about how climate change affects hurricanes, floods, heat waves and other severe weather. “One of the difficulties, when an event is happening, is trying to combine those two into one,” Kapnick says.

NOAA is currently reviewing how it communicates with the public about climate change, she says, in part because of a flood of interest from the public and from local officials who are grappling with more severe weather. 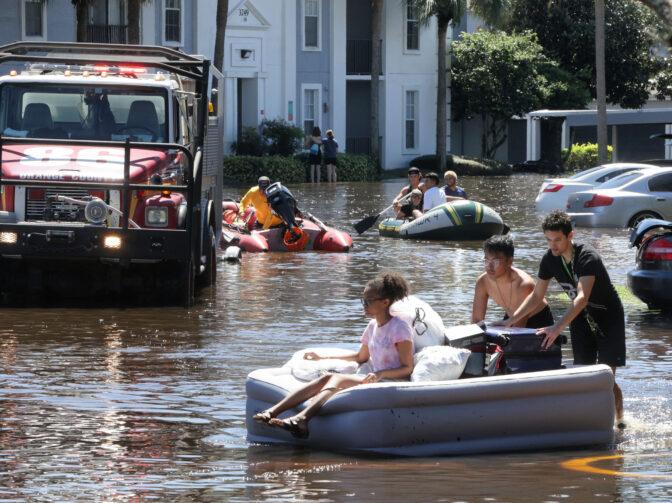 With Orange County Fire Rescue on the scene, residents of Arden Villas apartments use rubber boats, air mattresses and kiddie pools to float their belongings out of their homes, Sept. 30, 2022, after heavy rains from Hurricane Ian flooded the complex near the University of Central Florida. (Joe Burbank/Orlando Sentinal/Tribune News Service via Getty Images)

The gap between scientists and forecasters was on full display when Hurricane Ian hit Florida in September. The storm gathered strength over abnormally hot water in the Gulf of Mexico – water made hotter by human-caused global warming.

A large body of research shows that warmer oceans can make hurricanes worse by causing storms to dump more rain. Sea level rise in Florida makes storm surge more destructive. And research also suggests that climate change may make it more likely for storms to rapidly intensify, which also happened to Ian. Such storms are dangerous because they get extremely destructive right before hitting land, giving people little time to evacuate.

But forecasts and statements from the National Hurricane Center didn’t mention how climate change was likely to make Hurricane Ian more severe.

The day before the storm made landfall in Florida, the acting director of the hurricane center, Jamie Rhome, appeared on CNN and was asked how climate change might be affecting the storm’s intensification. He responded, “We can come back and talk about climate change at a later time. I want to focus on the here and now.”

“That statement was wrong,” says Wehner. “It is entirely appropriate for me to say climate change made this event more intense.”

Indeed, a preliminary analysis by Wehner and other climate scientists in the days after Ian made landfall estimated that climate change caused the storm to drop at least 10% more rain than it would have without global warming.

Asked about Rhome’s comments, Rick Spinrad, administrator of NOAA , which oversees the National Hurricane Center, said it is clear that climate change is affecting hurricanes and tropical storms.

“You look at what happened with Hurricane Harvey, Hurricane Ian,” he said in a recent interview with NPR, about two months after Hurricane Ian. “These storms are dumping feet of rain. We’ve not tended to see that before. So when you talk about attribution, I think it’s unequivocal that we can attribute to climate change the changes in the dynamics of these storms.”

But, Spinrad says, the research “isn’t robust enough yet” for weather forecasters to say exactly how much worse a given weather disaster will be, in real-time. Nor should that necessarily be the primary goal. Instead, he says his agency is focused on giving people information about what to expect in the future. For example, as heat waves get more intense, NOAA hopes to use extreme-event attribution science to beef up its ability to warn people.

Humans are habitually focused on the present. Your leaky roof demands more attention than the threat of a future climate-driven flood.

That’s why the time during and immediately after a weather disaster is so important. People who experience a severe heat wave or hurricane, and who understand that it is connected to climate change, are more likely to take action to protect themselves from future disasters, and to support climate policies, according to research by Gabrielle Wong-Parodi of Stanford University.

That includes more support for electric vehicles and policies to cut greenhouse gas emissions, as well as an interest in doing things like flood-proofing your home.

It’s unclear how long those attitudes last after a climate-driven disaster. Figuring that out is an active area of research. “There appears to be this window of time within which you might want to help people better understand what those risks are, and make links to climate change,” Wong-Parodi explains.

“I think that’s really important as we move forward, because it has implications for how we may want to communicate to the public about these types of events,” says Wong-Parodi.