Protesters stand in front of the Academy of Natural Sciences in Philadelphia. Two families were awarded a total of $2.24 million by a federal jury on Thursday.

Residents declined comment Monday night as they left the meeting at a high school near Dimock, saying they’d been instructed by a prosecutor not to talk. 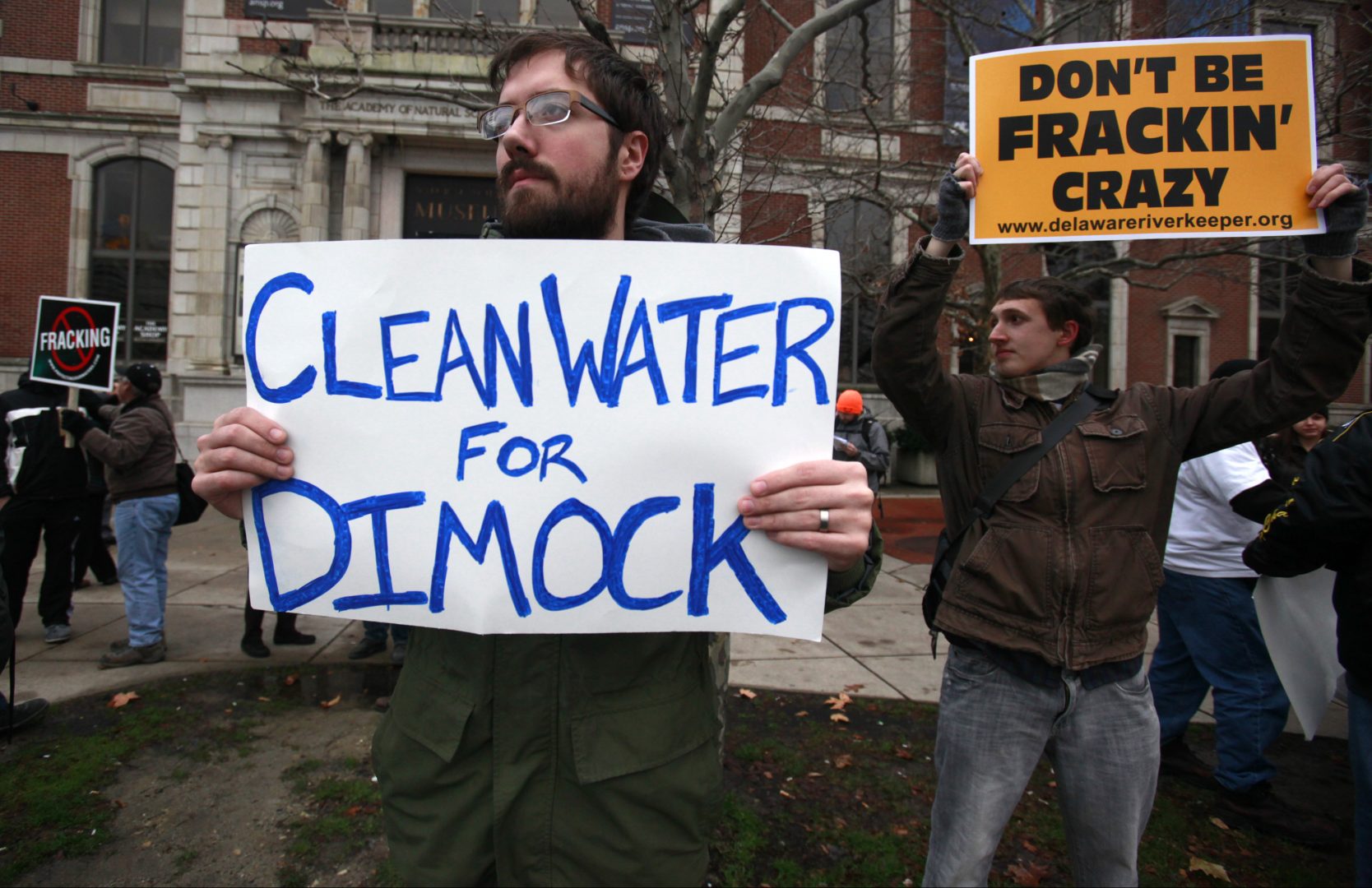 Protesters stand in front of the Academy of Natural Sciences in Philadelphia. Two families were awarded a total of $2.24 million by a federal jury on Thursday.

A new water line will deliver something that residents of a rural Pennsylvania community have gone without for the last 14 years — a clean, reliable supply of drinking water — after a public utility on Tuesday released the first details of a plan to mitigate the damage that a gas driller is charged with causing.

The tiny crossroads in northeastern Pennsylvania, about 15 miles (24 kilometers) from the New York state line, drew national notoriety after residents were filmed lighting their tap water on fire in the Emmy Award-winning 2010 documentary “Gasland.”

Pennsylvania American Water said it plans to drill two wells — what it calls a “public groundwater system” — and build a treatment plant that will remove any contaminants from the water before piping it to about 20 homes in Dimock, site of one of the most notorious pollution cases ever to emerge from the U.S. drilling and fracking boom.

“Pennsylvania American Water is pleased it had the opportunity to partner with the Attorney General’s office to develop a safe drinking water solution for the residents of Dimock, who like all of us, deserve access to clean, safe, reliable, and affordable drinking water,” Dan Rickard, the utility’s engineering manager, said in a statement.

Dimock residents were briefed on the plan Monday night at a meeting with Pennsylvania American Water and high-level officials in the state attorney general’s office, which is pursuing criminal charges against the drilling company blamed for polluting Dimock’s aquifer.

Residents declined comment Monday night as they left the meeting at a high school near Dimock, saying they’d been instructed by a prosecutor not to talk.

“Our office remains laser focused on using our limited tools to restore clean drinking water for the residents of Dimock,” Jacklin Rhoads, a spokesperson in the attorney general’s office, said in a statement Tuesday. “Yesterday, our attorneys along with Pennsylvania American Water updated the impacted residents on the status of the case and the extensive independent research done with one goal — how best to provide clean water to their homes.”

Further details of the water line plan, including its cost and whether the driller, Coterra Energy Inc., will bear the financial burden as part of any settlement of the criminal case, were not publicly released Tuesday.

Residents of Dimock have used bottled water, bulk water purchased commercially, and even water drawn from creeks and artesian wells, saying they don’t trust the water coming from their wells.

The state attorney general’s office got involved in June 2020, filing criminal charges against the former Cabot Oil & Gas Corp. after a grand jury investigation found the company had failed to fix its faulty gas wells, which leaked flammable methane into residential water supplies in Dimock and surrounding communities.

Cabot, which recently merged with Denver-based Cimarex Energy Co. to form a new company, Coterra Energy Inc., has long maintained the gas in residents’ water was naturally occurring. It faces a total of 15 criminal counts, most of them felonies, including illegal discharge of industrial wastes and unlawful conduct under the state’s Clean Streams Law.

The company — the most prolific driller in the nation’s No. 2 natural gas-producing state — said Tuesday that it is working to resolve the criminal charges.

“Coterra remains committed to achieving an amicable resolution with the Office of the Attorney General. We continue to work towards a resolution that is productive and beneficial to the community and landowners,” said George Stark, a company spokesperson.

Pennsylvania American, meanwhile, was involved in the state’s aborted 2010 effort to connect the residents of Dimock to an existing municipal water system about 6 miles (9.6 kilometers) away.

A dozen years ago, state environmental regulators secured nearly $12 million in financing for the project — and pledged to sue Cabot to recoup the money — but were forced to back down under legal threat from the company and local officials, who called it a boondoggle. Instead, Cabot agreed to pay residents a total of $4.1 million and install individual water treatment systems.

But some residents say the systems never worked properly, forcing them to purchase bottled water for drinking and cooking and get larger deliveries of water for showering, washing dishes and flushing toilets. Those same residents flatly rejected a proposal by the attorney general’s office last December that Cabot pay for the installation of new treatment systems.