Did the world make progress on climate change? Here’s what was decided at global talks 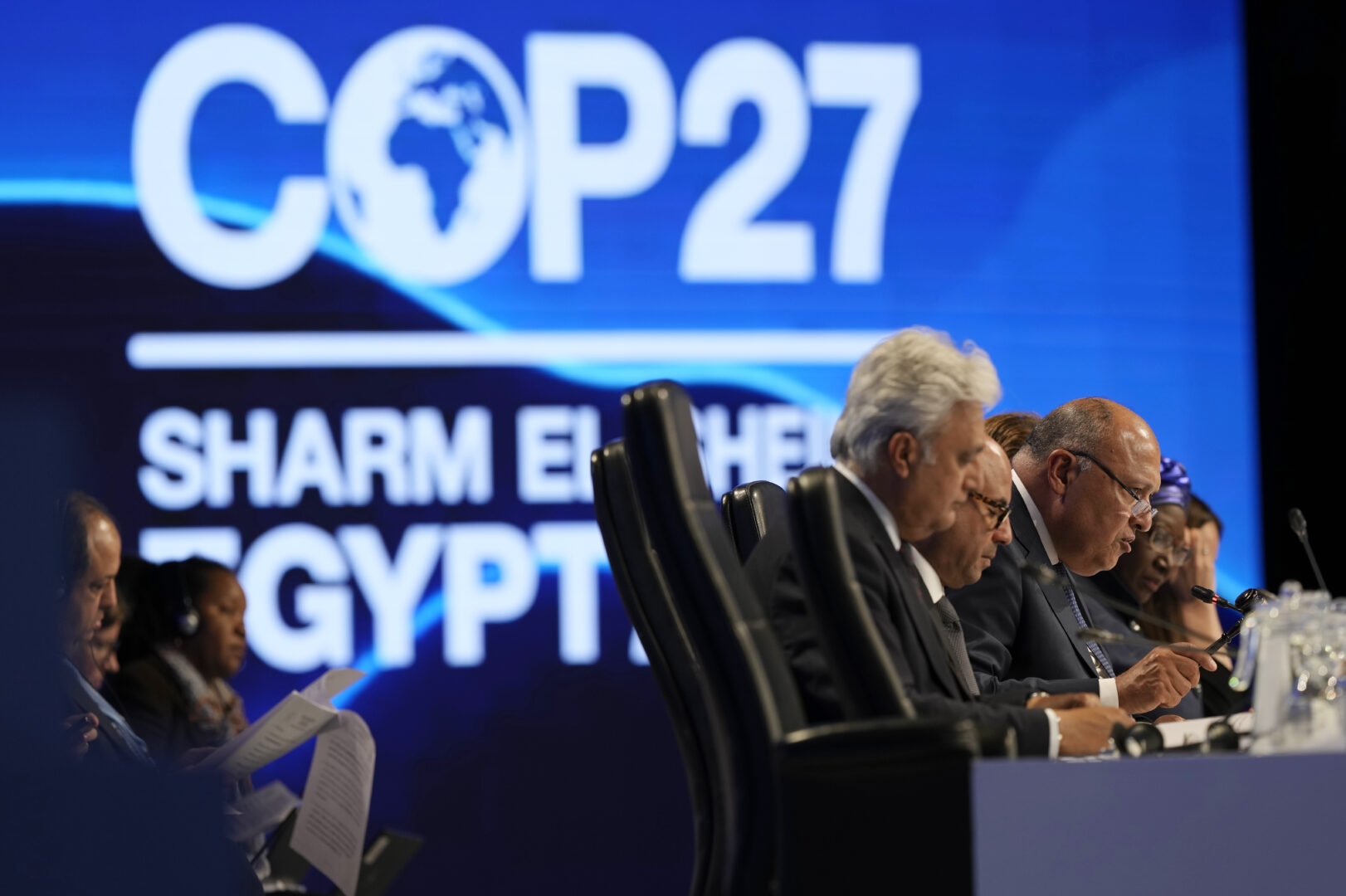 Deep-seated tensions flared between richer countries that have prospered by burning fossil fuels, and developing ones, which are bearing the brunt of climate-driven disasters. But in a historic move, countries agreed to establish a fund to support poorer countries already hit hardest by the impacts.

The negotiations went nearly two days past their scheduled deadline – into “hostage phase,” as one South African delegate put it. Countries struggled to compromise on a plan that would reduce global dependence on fossil fuels, while helping vulnerable countries pay for the damage caused by worsening sea level rise, storms, droughts, heat waves and other climate-driven disasters.

The final deal, announced Sunday morning in Egypt, reiterates the goal set by the 2015 Paris climate agreement to keep overall global warming from rising more than 1.5 degrees Celsius (about 2.8 degrees Fahrenheit) compared to pre-industrial era of the 1800s.

But it is unclear how that goal will be achieved, because negotiators could not agree that fossil fuels must be phased out. The vast majority of planet-warming pollution comes from humans’ use of oil, gas and coal, and most remaining fossil fuel deposits must remain untapped in order to rein in global warming, scientists have determined.

Here’s what was and wasn’t decided at COP27, and what it means for humanity.

World leaders did not agree to phase down fossil fuels

Many nations arrived at the talks with the hope of keeping “1.5 degrees alive.” The world is on a path to hit almost double that level of warming by the end of the century. Beyond 1.5 degrees Celsius (2.8 degrees Fahrenheit), storms, heat waves and other climate impacts become much more destructive.

As the COP27 talks got underway, a broad coalition of countries began calling for the phase-down of all fossil fuels. Small island nationals joined European countries in pushing for that language to be included in a final agreement. So did India, a country that had pushed back against the idea of phasing out coal at last year’s COP26 talks in Glasgow.

Despite a last minute push, the Egyptian delegation, which brokered the final deal as hosts of the conference, did not put phasing down fossil fuels in the final text. Instead, the final agreement encourages “efforts towards the phasedown of unabated coal power and phase-out of inefficient fossil fuel subsidies.”

Oil-producing countries like Saudi Arabia have long pushed back against efforts to curb fossil fuels. At these talks, the country announced that it continues to see a future of oil production, but will invest in new efforts to capture emissions and prevent them from reaching the atmosphere, known as carbon capture and sequestration. Climate activists say this new shift is simply a way to prop up fossil fuels with a technology that will not scale up for decades.

“New calls to accelerate deployment of renewable energy were very welcome,” said Ani Dasgupta, president of the World Resources Institute, in a statement. “But it is mind boggling that countries did not muster the courage to call for phasing down fossil fuels, which are the biggest driver of climate change. ”

Developing countries arrived with a key demand at these talks: wealthier countries must compensate them for the rising costs of floods, storms and other climate impacts. Now, they’ve agreed to start setting up a fund to do just that for the most vulnerable countries, including island nations struggling for survival as sea levels rise, and low-income countries grappling with deadly droughts, floods and heat waves.

The richest and most-powerful 20 countries produce about 80% of the world’s emissions every year. Low-income countries produce relatively little heat-trapping pollution. But the toll of climate change is already devastating many of them, economically and culturally.

She and other representatives from smaller countries came to the conference demanding the creation of a new fund, housed under the United Nations, that would pay developing countries for the “loss and damage” they’re already suffering.

“If the planet is burning up, we are burning up on the front line,” said Sherry Rehman, climate change minister for Pakistan. “We are the ground-zero of that climate change. So while we are seeing that burn, we are not contributing to that burn.”

The U.S. is the largest historical contributor to climate change by a large margin. Today, China is the largest emitter of greenhouse gas emissions. But Chinese representatives at COP27 said, while the country is open to voluntarily contributing to loss and damage, it should only be an obligation for historically wealthier countries like the U.S. and European Union.

Several European countries pushed back, wanting to see a new loss and damage fund with a “broad contributor base,” given that China and India are expected to increase their emissions until the end of the decade as their economies grow.

A fund that didn’t draw money from current high-emitters was “unacceptable,” said European Commission executive Vice-President Frans Timmermans, earlier in the week. “I think everybody should be brought into the system on the basis of where they are today. And those countries who have the facility to support the most vulnerable should do that.”

Tensions also rose over whether all developing countries should be eligible to receive funds, or just the most vulnerable, like small islands and African nations. Under the United Nations framework, India and China are still considered developing countries.

The U.S. said little on the issue for most of the negotiations, a silence that was deafening for many developing countries. Before the talks, Biden Administration officials said they wanted to explore using existing networks for humanitarian aid, instead of creating a new dedicated fund.

“No one can deny the scale of loss and damage we see around the globe,” U.N. Secretary General Antonio Guterres said in Egypt. “The world is burning and drowning before our eyes.”

The final COP27 agreement sets up a timeline for countries to work out the details of a new fund over the next year. lt does not say which countries will be required to contribute to the fund, though it mentions “expanding” the sources of funding, a nod to Europe’s demand that other countries contribute as well.

And the deal also does not set a firm timeline for when the money must arrive. Many wealthy countries, including the U.S., have failed to follow through on billions of dollars of previously promised climate funding.

“It’s worth noting that we have the fund, but we need money to make it worthwhile,” said Mohamed Adow, executive director of Power Shift Africa, a policy and advocacy group working on climate action in Africa. “What we have is an empty bucket. Now we need to fill it so that support can flow to the most impacted people who are suffering right now at the hands of the climate crisis.”

Wealthier countries said in 2009 that they would provide developing nations with $100 billion a year in financing by 2020 to help them limit their own greenhouse gas emissions and adapt to impacts like more extreme floods and worsening drought. The arrangement, called climate financing, is rooted in the fact that industrialized countries such as the United States have emitted most of the pollution heating the Earth, while poorer nations are bearing disproportionate harm caused by rising temperatures.

Despite those promises, the latest tally by the Organization for Economic Co-operation and Development shows developing countries received just $83.3 billion in 2020.

That shortfall in promised climate funding for low-income nations is a “serious concern,” participants at this year’s meeting said, and they urged industrialized countries to make good on their long standing commitments. The final agreement did not say when those commitments should be met.

Even if wealthy nations come through on their pledges, it’ll still be far short of what developing countries actually need to respond to climate change. To meet the climate goals they’ve set so far, developing countries will require at least $5.8 trillion up to 2030, according to the final agreement.

“How are we going to make this transition?” said Colombia Environment Minister Susana Muhamad at the conference. “Especially for oil producing and coal exporting countries like ours, that conversation isn’t even on the table and without that conversation we’re probably not going to phase out fossil fuels.”

The final agreement struck in Egypt says developing countries need “accelerated financial support” from wealthier nations. It calls for reforms at development banks like the World Bank and the International Monetary Fund so that developing countries can get more climate funding without adding to their debts. And it says development banks, which were set up to give financial and technical aid to poorer countries, should do more to encourage private investment in low-income nations.

In all, the world needs to invest at least $4 trillion every year to create a low-carbon global economy, the final agreement says. Raising that sort of money will require a “transformation” of the entire financial system.

At the summit, both developing countries and the European Union pushed nations to have their emissions peak by 2025. That’s faster than China and India’s plans, which would allow emissions to rise through the end of the decade.

In the end, few countries submitted new plans to reduce their emissions and the final agreement didn’t impose any firm deadlines for new commitments, though it reiterated the importance of the 1.5 degree goal.

Nations will be leaving Egypt knowing that goal is still not in reach. In a best case scenario, emissions are only expected to fall around 10% by 2030, according to a report from the United Nations Environment Programme. To keep warming to the crucial threshold of 1.5 degrees Celsius, emissions would need to fall 45% by 2030.

Still, countries aren’t keeping the promises that they’ve made so far. If emissions stay on their current course, they’ll rise around 7% compared to 2020 levels, instead of falling.

There are some small bright spots

Going into this meeting, there were reasons to think that some of the basic agreements of the past – for example, limiting global warming to 1.5 degrees Celsius – might be on shaky ground. That’s because the global economy is fragile. Russia invaded Ukraine and the relationship between the two largest emitters of fossil fuels, the U.S. and China, has been strained – though there are indications that relations may be improving.

In the end, that global context did not completely derail the talks. While the final deal does not do enough to avoid catastrophic warming – and falls far short of what many climate advocates had hoped to see – countries didn’t go back on previous promises either.

And there were a handful of smaller announcements at COP27 that could help control greenhouse gas emissions and protect people from severe weather. One hundred and fifty countries have now signed a pledge to reduce methane pollution. Methane is a very potent greenhouse gas, which means it traps a lot of heat in the atmosphere, and it’s emitted mostly from oil and gas operations, landfills and agriculture.

There is also a new plan to beef up weather forecasts and disaster warnings in places that don’t have robust national weather services. And on the money front, there are concrete pledges to spend billions of dollars on clean energy in rapidly growing countries including Indonesia, Vietnam and Senegal.