Dr. Kristina Tocce stands for a portrait in the Planned Parenthood offices in east Denver on Tuesday, Nov. 15, 2022. Tocce said she recently treated a Texas woman whose cancer had gone into remission but came back aggressively after she became pregnant with her second child. She sought an abortion to resume the cancer treatment that promised to keep her alive for her toddler. (AP Photo/David Zalubowski) 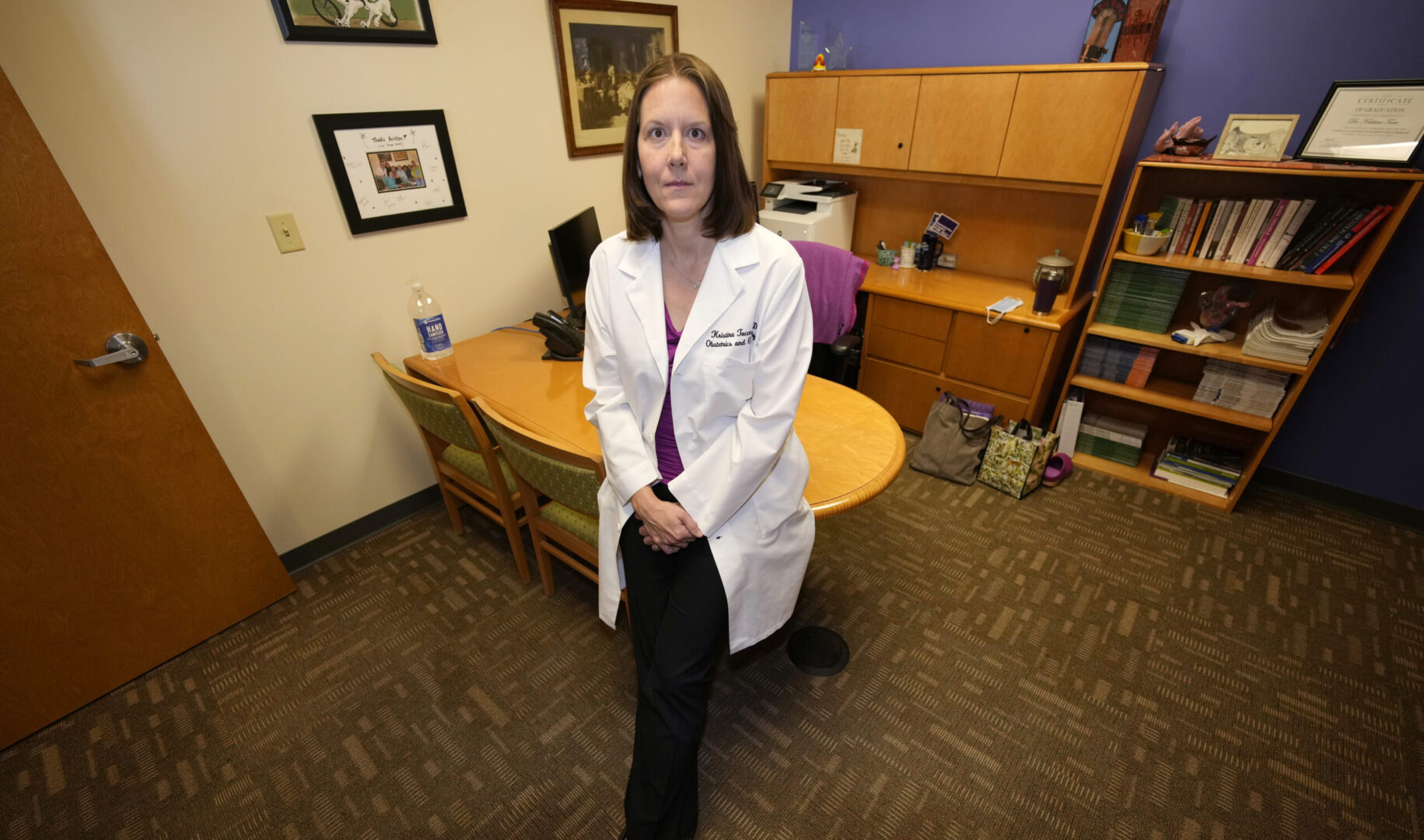 Dr. Kristina Tocce stands for a portrait in the Planned Parenthood offices in east Denver on Tuesday, Nov. 15, 2022. Tocce said she recently treated a Texas woman whose cancer had gone into remission but came back aggressively after she became pregnant with her second child. She sought an abortion to resume the cancer treatment that promised to keep her alive for her toddler. (AP Photo/David Zalubowski)

(Undated) — Weeks after Roe v. Wade was overturned, Dr. Grace Ferguson treated a woman whose water had broken halfway through pregnancy. The baby would never survive, and the patient’s chance of developing a potentially life-threatening infection grew with every hour.

By the time she made it to Pittsburgh to see Ferguson, the woman had spent two days in a West Virginia hospital, unable to have an abortion because of a state ban. The law makes an exception for medical emergencies, but the patient’s life wasn’t in danger at that moment.

“She was just kind of standing on the edge of the cliff,” Ferguson said, “waiting for an emergency to happen or for the baby to pass away.”

In Pennsylvania, at the hospital a four-hour drive away, Ferguson was able to induce labor to end the pregnancy.

A growing number of physicians and families tell similar stories as a post-Roe fear comes to pass: Pregnant women with dangerous medical conditions are showing up in hospitals and doctors’ offices only to be denied the abortions that could help treat them. Some doctors in states with restrictive abortion laws say they’ve referred or suggested more patients go elsewhere than ever. Some women are facing harmful, potentially deadly delays.

Doctors say they’re forced to balance medical judgment with potential punishments, including prison time. Although even the strictest laws allow abortion to save a mother’s life, a weighty question lingers: How close to death must the patient be?

“You don’t automatically go from living to dead,” Ferguson said. “You slowly get sicker and sicker.”

It’s impossible to say when that line is crossed, said Dr. Alison Haddock, who’s on the board of the American College of Emergency Physicians. “There’s just no moment where I’m standing in front of a critically ill patient where I know: OK, before their health was just in danger. But now, their life is in danger,” she said.

Experts say it’s hard to pinpoint data on abortion denials when serious complications arise. Employers often discourage health care workers from speaking about them, though The Associated Press reached more than a dozen doctors and patients who shared stories of such denials.

And many doctors and researchers agree that evidence, even if largely anecdotal, shows a widespread problem. In Texas, for example, a doctors’ association sent a letter to the state’s medical board saying some hospitals refused to treat patients with major complications because of the state’s abortion ban.

And at the University of California, San Francisco, researchers who invited health care workers nationwide to anonymously send examples of poor-quality care caused by abortion restrictions say they were surprised by the initial volume of responses. Twenty-five submissions came in the first six weeks. Among them were descriptions of patients sent home after their water broke in the second trimester who later returned with serious infections. One told of an ectopic pregnancy that was allowed to grow on a scar left by a previous cesarean section – which can cause uterine rupture, hemorrhage and death.

“The legislators are playing with fire,” said Dr. Dan Grossman, the project’s leader.

Dr. Cara Heuser, a maternal-fetal specialist in Utah, recalled one patient denied an abortion in Idaho despite developing a serious heart condition midway through pregnancy. The woman had to be transported to Utah for the procedure.

Dr. Lauren Miller, a maternal-fetal specialist in Boise, said she regularly sees patients whose water breaks at 15 through 19 weeks’ gestation, and all doctors can do is help them make the tough decision: “Do they stay here for their care and just wait until something bad happens, or do we facilitate them finding care out of state?”

Dr. David Eisenberg, an associate professor at Washington University in St. Louis, said Missouri doctors and hospitals are regularly “punting that responsibility for care” when people show up with serious complications. They wind up at the university-affiliated medical center where he works — one of the few in Missouri that performs abortions in such cases.

He said patients in crisis are told: “I’ve got to call the lawyer for the hospital before I can figure out what I can do.

The stories are similar when pregnancy is complicated by cancer — diagnosed in about 1 in 1,000 pregnant women each year.

Dr. Karen Knudsen, CEO of the American Cancer Society, said some oncologists are confused about treating pregnant cancer patients, particularly when therapies may induce miscarriage. Dr. Kristina Tocce, medical director for Planned Parenthood of the Rocky Mountains, said she’s seen patients with life-threatening diagnoses forced to drive 10 hours or more, or fly out of state, to get abortions so they can begin chemotherapy or radiation treatment.

Tocce said she recently treated a Texas woman whose cancer had gone into remission but came back aggressively after she became pregnant with her second child. She sought an abortion to resume the cancer treatment that promised to keep her alive for her toddler. During the visit, she thanked Tocce repeatedly.

“I finally told the patient: ‘You can’t thank us anymore. We are doing our jobs,’” Tocce said. “I said, ‘I am so disturbed that you had to travel so far with your family and the hurdles you have had to overcome.’”

Some abortion opponents say doctors may be unnecessarily denying abortions in life-threatening situations out of fear. Dr. Patti Giebink, a former abortion doctor who described changing her views in her book “Unexpected Choice: An Abortion Doctor’s Journey to Pro-Life,” said it comes down to intent. If you intend to save the mother and not end the life of the fetus, she said, “you’re doing good medicine.”

“We’re sort of in a period of time where all these questions come up,” she said. “The legislatures are going to be working to solve some of these problems.”

Dr. Paul LaRose, a member of the American Association of Pro-Life Obstetricians and Gynecologists, said he thinks the issue is overstated and those raising concerns are exaggerating.

“Or they may be they misinformed,” he said. “Most pro-life physicians would take care of the mother and do what’s necessary without purposely taking the life of the unborn baby.”

But some women say restrictive abortion laws have put them in danger.

Kristina Cruickshank of Rosenberg, Texas, thought her life was in jeopardy after a diagnosis of a nonviable “partial molar pregnancy,” in which the fetus has too many chromosomes and develops incompletely. Cruickshank, 35, had thyroid problems and massive cysts around both ovaries. She was vomiting, bleeding and in pain.

It was early June, shortly before Roe fell, when Texas banned nearly all abortions after roughly six weeks of pregnancy. She endured three days of agony in one hospital before her doctor could find another that agreed to the termination procedure. She thought: “What am I supposed to do, just lay here and die?’”

Mylissa Farmer of Joplin, Missouri, faced similar delays in August. Her water broke at 17 1/2 weeks’ gestation, sending her to the emergency room. Tests showed she’d lost all her amniotic fluid. The fetus she and her boyfriend had named Maeve wasn’t expected to survive.

Despite risks of infection and blood loss, she couldn’t get an abortion. The fetus still had a heartbeat. Doctors told her Missouri law superseded their judgment, medical records show.

She tried for days to get an out-of-state abortion, but many hospitals said they couldn’t take her. Ultimately, an abortion helpline connected Farmer with a clinic in Granite City, Illinois. She drove 4 ½ hours from home — while in labor — and had the procedure.

After news outlets covered Farmer’s story and she appeared in a political ad, the Missouri health department started an investigation into whether the Joplin hospital, which declined to comment on the case, violated federal law. The state has shared its preliminary findings with the federal government .

Farmer said the experience was so traumatic that she took a permanent step to ensure nothing like this happens to her again.

She got her tubes tied.