Beautiful mixed race female in her 20's doing relaxing yoga in her backyard while the sunsets behind her.

Daily meditation may work as well as a popular drug to calm anxiety, study finds 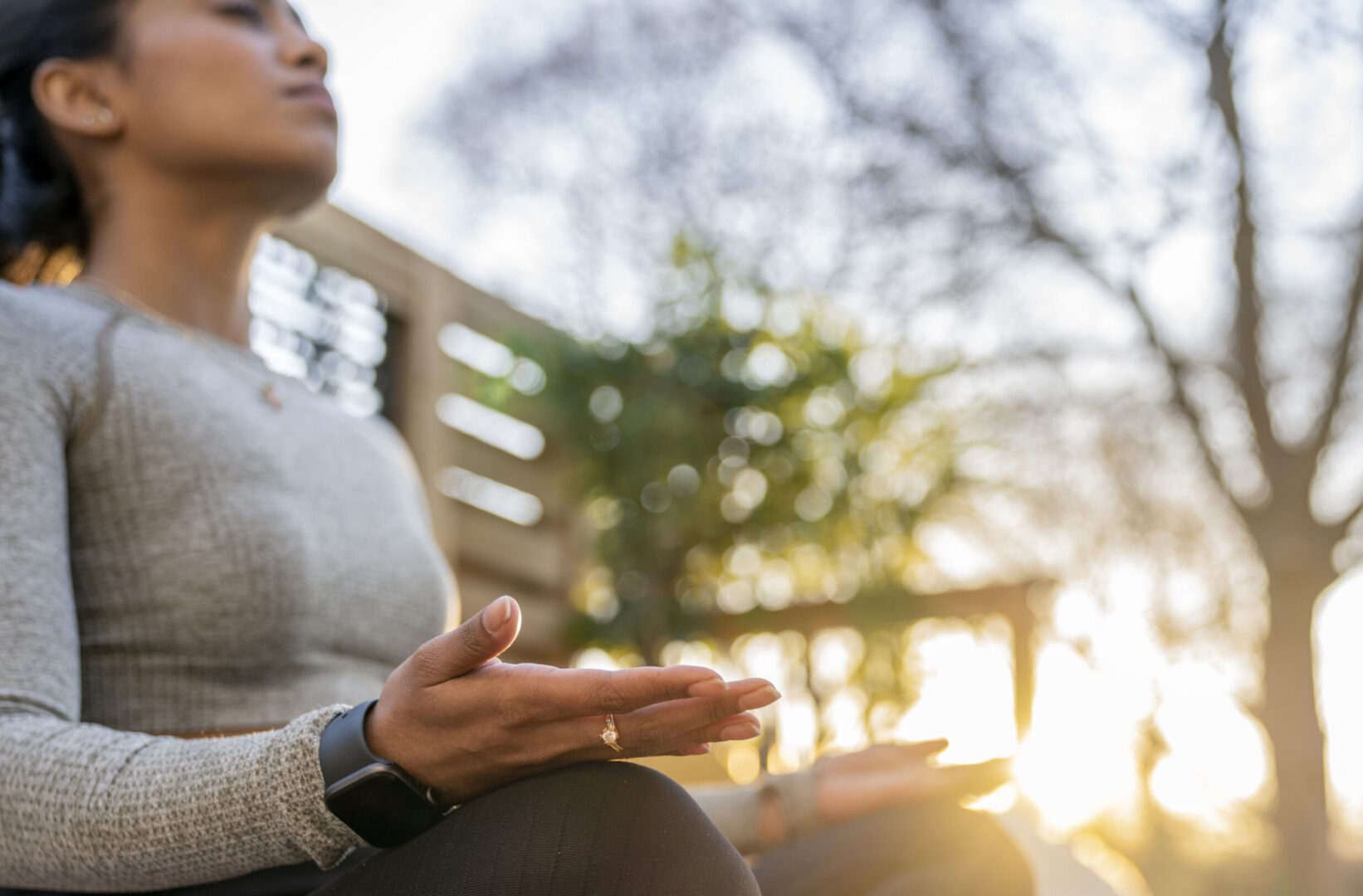 Beautiful mixed race female in her 20's doing relaxing yoga in her backyard while the sunsets behind her.

(Undated) — Anxiety symptoms like restlessness, feelings of worry and dread, and sleep problems, can interfere with daily life, relationships and career goals. Many people get relief using psychiatric medications, but finding the treatment that works best is an individual journey, and some look to find additional ways of coping with their symptoms.

Meditation is a well known method of calming anxiety, but now there’s new evidence showing it to be effective at managing anxiety.

For the first time, scientists compared patients who took an intensive eight-week mindfulness meditation program to patients who took escitalopram, the generic name of the widely-prescribed and well-studied anxiety drug Lexapro. They found that both interventions worked equally well in reducing debilitating anxiety symptoms. (Talk therapy, another effective treatment for anxiety for some people, was not addressed in this study.)

The study was published in JAMA Psychiatry on Wednesday, and the research began long before the COVID-19 pandemic struck, when it could still be conducted in person.

Researchers took 276 adults diagnosed with untreated anxiety disorders such as generalized anxiety, panic disorder, or social anxiety, and split them into two randomized groups. One group received a 10 to 20 mg daily dose of Lexapro – a standard beginning dose.

The other half was assigned to weekly two-and-a-half hour mindfulness classes at a local clinic — using an approach called Mindfulness-Based Stress Reduction — plus 45 minutes of daily meditation homework for eight weeks, as well as a day-long retreat around week five or six.

The study participants who took the drugs and those who participated in the meditation program were evaluated at the end of eight weeks using the same clinical scale, and both groups showed about a 20% reduction in the severity of their symptoms.

“The fact that we found them to be equal is amazing because now that opens up a whole new potential type of treatment,” says study author Elizabeth Hoge, director of the Anxiety Disorders Research Program at Georgetown University Medical Center.

Hoge notes that she’s not suggesting that meditation replace escitalopram — she herself prescribes the drug regularly to her anxiety patients. She says her intent is to add new treatment options, and ultimately, provide evidence that would get insurance companies to cover mindfulness-based interventions for anxiety.

How mindfulness may help

Mindfulness-Based Stress Reduction, or MBSR, the technique taught in the study, was developed more than 40 years ago by Jon Kabat-Zinn and is based on the principles of meditation established in Buddhist vipassana meditation.

It teaches students to focus on the breath and direct attention to one body part at a time to see how it feels, and encourages them to try to focus on what is happening now, rather than the past or the future.

It suggests a way to look at their negative thoughts with less judgment, explains Hoge.

“Somebody with anxiety tends to worry about bad things that may happen, like failing an exam,” she says. “When the thought comes up, then the person can learn to experience that as just a thought, not the truth or anything that needs to be acted on,” she says, and that can calm anxiety.

MBSR is widely used to reduce stress among health care professionals and in clinical settings and has been studied as an intervention for pain, depression and several other conditions.

The new study provides another piece of evidence of the potential of the approach.

A potential complement to medication

Researchers and clinicians who treat anxiety praised the study.

“It does suggest that both treatments are helpful, and about equally so,” says Michael Mrazek, a research associate professor at the University of Texas, Austin and the co-founder of the Center for Mindfulness & Human Potential at the University of California, Santa Barbara.

“Importantly, the study shows that MBSR can achieve similar outcomes with tremendously fewer side effects,” Mrazek tells NPR in an email.

Side effects of escitalopram include suicidal thoughts in extreme cases, but more commonly diarrhea, loss of sexual desire or ability, nausea, and constipation.

Though numerous participants in the medication arm of the study had side effects like sleep problems and nausea, none of the patients in either group left the trial because of side effects.

Joy Harden Bradford, a psychologist in Atlanta who hosts the podcast Therapy for Black Girls, says she was “surprised but not shocked” that the meditation treatment works as well as the medicine, and is excited that a new avenue of treatment might become more widely available.

“The thing I would hate to have happen is for people to pit medication against the mindfulness-based resources,” Harden Bradford cautions. For example, someone with panic attacks may have a much quicker reduction in those attacks with escitalopram, rather than waiting weeks for meditation practices to take hold, she says.

It’s worth noting that longer term adherence to the treatments was higher for participants taking Lexapro than for the meditators. At 24 weeks, just 28% of the MBSR arm were still doing daily meditation, compared to 52% taking the drugs.

That could point to the challenges of learning mindfulness techniques. Many people may not have the time or money required to participate in an eight-week guided program, and scrolling meditation apps or trying out a free course at the YMCA is not exactly comparable.

Meditation is a skill that takes time and dedication and practice. “If you want to take it seriously, you’ve got to get a teacher,” says Hoge.

Mrazek, who studies how to teach mindfulness, says it might be a good idea to see how both MBSR and Lexapro work together. “Neither MBSR or escitalopram eliminated participants’ anxiety, and it’s possible that larger improvements would arise from combining both treatments,” he says.

More research to come on meditation apps and online tools

There are shortcomings to the study. For one, the majority of the participants were single, white, well-educated women with full time jobs. “Not everyone can clock out at 5 o’clock to get to the 6 o’clock [meditation] meeting,” notes Harden Bradford.

However, women have higher rates of anxiety disorders than men. And “there is plenty of existing evidence that MBSR can benefit a wide variety of folks, so there’s not much reason to doubt the generalizability,” says Mrazek.

One way to make meditation more widely accessible to people with anxiety would be to use an app instead of in person training.

Mrazek says the future of MBSR must be online. “Hopefully this study will help make MBSR more widely available, but it’s extremely hard to scale up in-person programs to reach millions of people. That’s why I think digital programs are the future of mindfulness training,” he says.

Hoge is planning future research to determine if using online guided meditation could help with anxiety, though she emphasizes the value of learning meditation in a class.

“I really don’t think apps are going to provide the same benefit as having in-person training. … The benefit of having a meditation teacher is that you can ask questions,” Hoge says.

Still, mindfulness apps, says Harden Bradford, can teach people “concrete skills,” she says, which may help reach more people. “Giving people something is better than having nothing,” Harden Bradford says.

Editor’s note, Nov. 11, 2022: This story has been updated to include additional comments from researchers and clinicians on how medication and meditation may complement one another, and on future avenues of research.