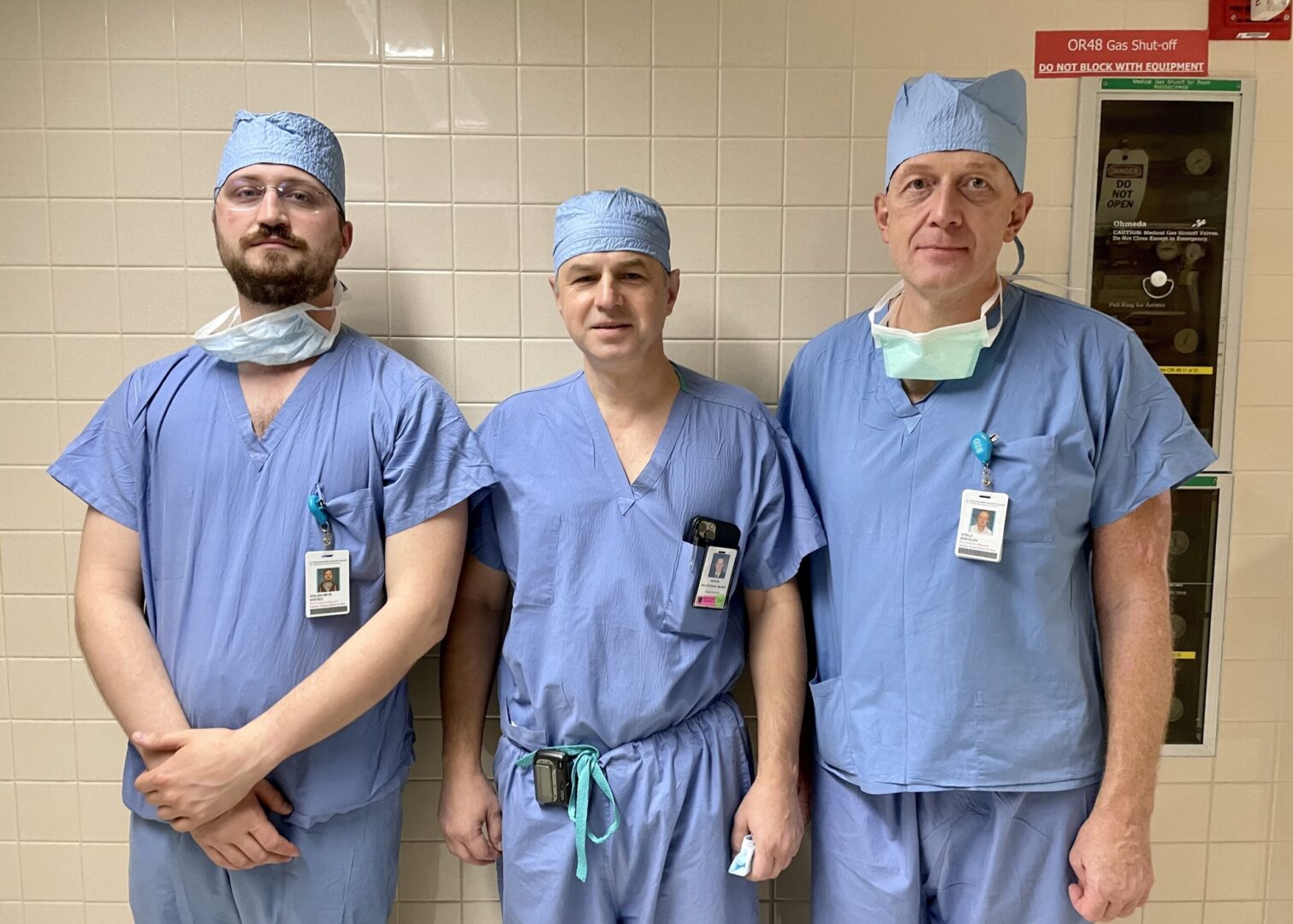 (Boston) — There’s a rhythm to most surgeries at Massachusetts General Hospital in Boston: the beep of a heart monitor, the surgeon’s calls for “scalpel … scissors … clamp.” But today, that rhythm sounds different. It’s mixed with quiet chatter in Ukrainian.

The surgeon, Dr. Serguei Melnitchouk, is repairing a patient’s leaky heart valve. He explains his technique to two observing doctors, both thoracic surgeons visiting from Feofaniya Clinical Hospital in Kyiv. They’ve traveled to Boston for a crash course in some of the most complex procedures in medicine: heart and lung transplants.

Ukraine has long lacked a full-service organ transplant center. Previously, patients who needed a new set of lungs would travel abroad for the procedure, funded by the country’s universal healthcare system. But that funding has been drained by Ukraine’s war effort, and other countries have restricted foreigners’ access to transplant services. So some Ukrainian patients are left without the chance for a life-saving transplant. The crash course at Massachusetts General Hospital (MGH) aims to change that. It will allow the Ukrainian doctors to open their own lung transplant center — giving patients hope for a better future, even amid the shadows of war.

A chance to help

Melnitchouk has spent his decade-long career as a cardiothoracic surgeon at MGH in Boston. But he was born in western Ukraine. His parents still live in the agricultural town where he grew up.

In April, during the chaotic early days of Russia’s invasion, Melnitchouk traveled back to Ukraine to lend his expertise to the war effort. He taught trauma care to doctors at three local hospitals where beds were filling up with the wounded. Outside the hospitals, roadsides were littered with burnt-out tanks and tree trunks whose canopies had been blown off by missiles. The sights were hard to process.

“It was painful,” said Melnitchouk. “That’s your country where you grew up, and you can’t recognize it. It was hurting my heart.”

He wanted to do more to help.

Opportunity arose when he spoke with doctors at the hospitals he was visiting. They kept inquiring about a procedure seemingly unrelated to the pressing wartime concerns.

Melnitchouk learned that Ukraine had only recently opened transplant centers for organs like kidneys and livers, but the country still lacked capacity to transplant lungs, partly due to technical challenges.

“Lungs are one of the hardest transplants,” said Melnitchouk, who has completed dozens of successful lung transplants.

He says the challenge arises from the organs’ complex vascular structure and a high risk of immune system rejection after the procedure. Plus, lungs come in pairs.

“Once you finish one lung, you have to do it again,” he said. “So it’s a longer operation.”

Patients in need of that operation are unable to receive it now, according to Vasyl Strilka, who leads the development of an organ transplant system for Ukraine’s Ministry of Health. The cash-strapped government can no longer foot the $150,000 bill for each patient sent abroad. (Many doctors in Ukraine have worked without pay for months.)

Strilka adds that India and Belarus, where Ukrainians previously traveled for transplants, both recently passed laws restricting foreigners’ ability to receive the procedure there.

Strilka knew Ukraine had to open its own lung transplant center. The procedure can be the only option for patients with end-stage lung disease, often caused by advanced COPD or cystic fibrosis. So when Strilka met Melnitchouk during his April trip to Ukraine, they hatched a plan with the help of Oksana Dmitrieva, a member of Ukraine’s parliament who has led the push for a local transplant center.

Ukraine would send a team of 13 doctors to Melnitchouk’s practice at MGH, where they would spend three months learning techniques for lung and heart transplant. The program’s first hurdle was funding.

“Our original plan was that they would just rent Airbnbs, and they would live in apartments close to the hospital,” said Melnitchouk. “But the Ministry of Health is pretty broke right now.”

A home away from home

By reaching out through church networks in Boston, they found volunteer families to host the doctors, who arrived in early October.

The arrangement has allowed the visitors to experience New England at its fall finest. Dr. Vitalii Sokolov, a thoracic surgeon from Feofaniya Hospital, said his Boston host family took him leaf-peeping in New Hampshire one weekend. Plus, he sampled a bowl of New England clam chowder. His review of the soup: “not impressed.” Sokolov is impressed by his host family’s openness and generosity.

“I would say that I have another mother and father in the States,” he joked.

But Sokolov’s thoughts never stray far from his own family back in Kyiv. He wakes at 5 a.m. each day to call them, checking that they have electricity and heat amid Russian attacks on energy infrastructure. Then, Sokolov heads into the hospital for training.

He and the other visiting doctors have observed three lung transplant operations since they arrived.

“I’ve got the impression that lung transplantation, and transplantation in general, is a team game,” Sokolov said, referring to the crew of doctors and nurses who aid the patient through the lengthy post-operative treatment.

Sokolov is observing that team in action at MGH. In December, he’ll return to Kyiv to lead his own team at Ukraine’s new transplant center. Melnitchouk plans to be there for the first few transplants, to ensure the Ukrainian team’s smooth transition from training to practice.

For now, Melnitchouk is grateful for the chance to speak his native language in the operating room with the visiting doctors.

“This is my first time in my life — in my last nine years attending — to speak Ukrainian. I’m actually very, very happy,” said Melnitchouk, choking up. “I’m very grateful that I had this chance to somehow give back something to my country.”

With Democrats' win in Arizona, control of the Senate may come down to Nevada