FILE - Doug Mastriano, speaks at an event on July 1, 2022, at the state Capitol in Harrisburg, Pa. Pennsylvania's Republican governor nominee, Mastriano is appearing Tuesday before the Jan. 6 committee investigating the U.S. Capitol insurrection as the panel probes Donald Trump's efforts to overturn the 2020 presidential election. 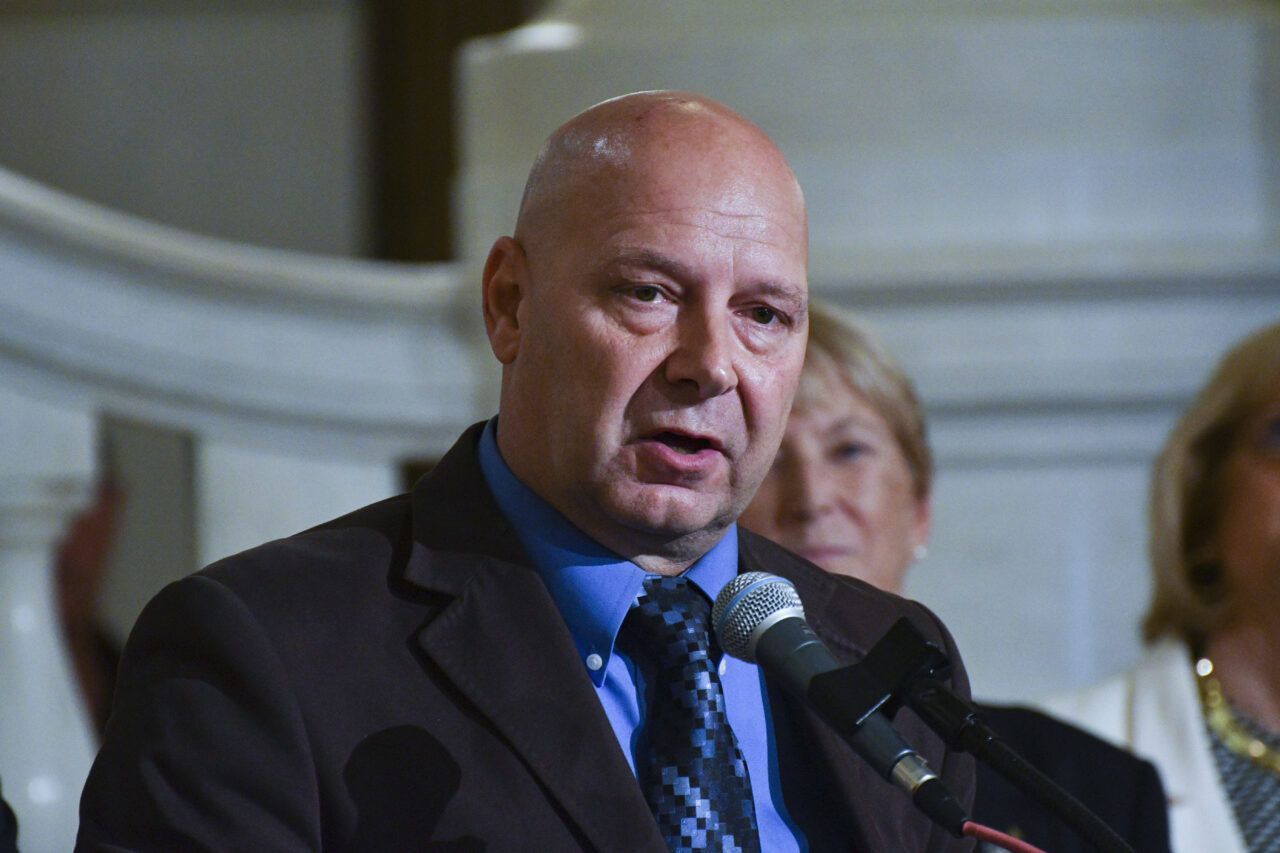 FILE - Doug Mastriano, speaks at an event on July 1, 2022, at the state Capitol in Harrisburg, Pa. Pennsylvania's Republican governor nominee, Mastriano is appearing Tuesday before the Jan. 6 committee investigating the U.S. Capitol insurrection as the panel probes Donald Trump's efforts to overturn the 2020 presidential election.

The state senator from Franklin County claims — without proof — that there were enough dead voters and voter roll irregularities during the 2020 election to warrant a statewide audit of the results.

He wants stricter voter I.D. and an audit of Pennsylvania’s voter registration system.

But he still thinks there was something wrong with the 2020 election, which has been declared free-and-fair by county, state, and federal judges; both Republican and Democrat officials; and election experts.

And if he wins on Tuesday, he told conservative outlet NewsMax – his plans include something big.

“There’s still a lot of dead on the rolls,” he said. “And there’s ghost phantom voters that we found, as well, at various addresses.”

A federal judge declined to hear a case brought by a conservative legal group two weeks before the 2020 election which claimed thousands of dead voters illegally cast ballots.

She noted wiping the voter rolls and making Pennsylvanians re-register is illegal.

“In the statutes in the National Voter Registration Act, there’s a specific prohibition against making people re-register once they registered,” Schneider said. “And we have the same language; Pennsylvania picked up the same exact language in our voter registration law.”

Schneider litigated numerous voting rights cases in the state, served on the National Task Force on Election Crises in 2020, and was the Deputy Secretary for Elections and Administration at the Pennsylvania Department of State from 2015-17.

“Has anybody done a study? No, because nobody in their right mind has ever proposed purging the entire voter registration list and making everybody re-register. There’s no good data on this,” she said.

No state has reset its voter rolls since the 1970s.

During Reconstruction, some former Confederate states made voters re-register every year, which experts believe was designed to disenfranchise Black voters. One such effort in Texas lasted until 1971, when a federal judge struck it down.

He called it a direct descendant of the poll tax, a Jim Crow law designed to prevent Black people from voting.

Scott flagged close to three thousand registered voters as non-citizens, but many of them turned out to be legal voters.

“They ended up purging Latino voters who were citizens and who had been citizens, but they had Latino surnames,” Schneider said. “That was a clear example of a voter purge that negatively impacted the Latino community in Florida.”

A federal judge struck down Scott’s proposal, ruling it violated both the National Voter Registration Act and the Voting Rights Act.

“One of the things we did when I was at the department was to join the Electronic Registration Information Center, which is data sharing among states to try to address this very problem: Make it easier for people to tell counties when they’ve moved out of state,” she said. “There are things that we can do.”

The secure database – also known as “ERIC” – allows for 31 member states (and Washington D.C.) to share voter information and data from the Department of Motor Vehicles.

Pennsylvania updates its records in ERIC every two months and gives annual reports about voters who have moved to county officials who are required to follow up with them.

The DOS legally can’t verify its rolls with ERIC’s data about dead voters, so the department cross-references records from the Department of Health, Register of Wills, and newspaper obituaries.

But Schneider said the info should be in one place.

“We should get all of these state agencies digitally hooked up,” she said. “So that they can gather information from their clientele and have it digitally transferred to the Department of State.”

A bill passed unanimously in the state House to allow Pennsylvania to use ERIC’s death records. It awaits a vote in the Senate.

Under current law, no registered voter can be required to register again while they live at the same address.

If Mastriano reset the voter rolls, people who would have the hardest time re-registering would be the ones already facing obstacles to register.

Scott Seeborg is co-director of states with All Voting is Local, a non-partisan voter advocacy group.

He said this includes people living in assisted living facilities and low-income urban voters. They frequently move without updating their address and many don’t have driver’s licenses.

“Black, Latinx, Indigenous people of color communities would certainly be hardest hit here,” Seeborg said. “The barrier to getting those documents is higher for those communities at large.”

Those voters would likely be mostly Democrats, which in the 2020 election, included over six-in-10 Latino voters and nine-in-10 Black voters in Pennsylvania.

Republicans are gaining on Democrats in registered voters in the traditional swing state.

This year, there are about half a million more registered Democrats than Republicans in Pennsylvania, down from twice that many ten years ago.

Re-registering the voters purged from the rolls would ultimately fall to county election offices and the Department of State.

Seeborg said the commonwealth lacks the financial resources, and staff, to handle this task.

“We’re the fifth largest state in the country, yet we have the third smallest election staff. Can you imagine that there are 12 people only in the Department of State’s office that focus on elections?” Seeborg said. “So, if we’re dividing that by how many registered voters there are, 9 million-10 million, roughly a million voters per staff member, how do you think that’s going to work out?”

The ACLU’s Marian Schneider is confident Pennsylvania’s elections are secure.

“I think we’ve come a long way in cleaning up the voter rolls, and we will continue to make steps in that regard,” she said. “Clean voter rolls benefit everybody. Making everybody re-register doesn’t benefit anybody.”