Diana Robinson, the director for civic engagement for Latino and immigrant advocacy group Make The Road Pennsylvania, speaks at the "Party at the Polls Makes Voting Joyful in Berks County, Countering Voter Intimidation with Celebration" event outside of the Berks County Services Center on Nov. 2, 2022

Berks officials say the county is addressing past and present issues in preparations for midterm election. 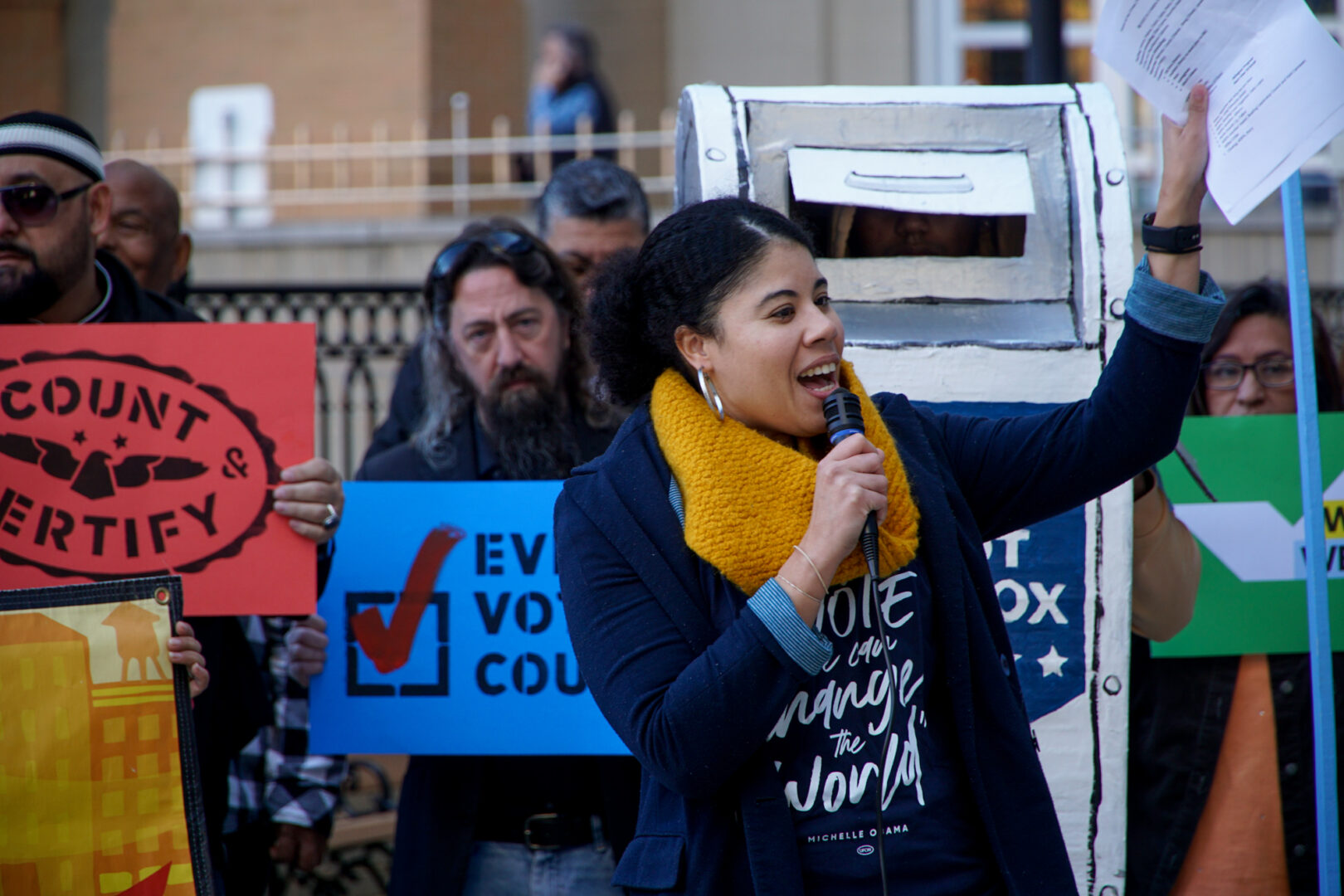 Diana Robinson, the director for civic engagement for Latino and immigrant advocacy group Make The Road Pennsylvania, speaks at the "Party at the Polls Makes Voting Joyful in Berks County, Countering Voter Intimidation with Celebration" event outside of the Berks County Services Center on Nov. 2, 2022

Lis Mejia entered the Berks County Services building Tuesday and approached Deputy Riley Gutierrez, who was set up behind a table near the ballot drop off box.

When she approached, Gutierrez asked her if the ballot was hers and if it was signed and dated.

“No, it’s for somebody else,” Mejia told the deputy.

Gutierrez gave Mejia a form and let her know that her homecare client would have to fill out the form, letting the county know someone else had submitted her ballot.

When asked about how she felt about being approached and directed by the sheriff’s deputy, Mejia said she felt “wonderful,” and she found him to be helpful.

Her client who waited in the car, 78-year-old Reading resident Leonor McCrory, said she needed someone to drop off the ballot due to her difficulty walking and being short of breath.

Neither McCroroy nor Mejia knew they would need a form to drop off McCrory’s ballot. But McCrory said she thought it was good that the county and deputies were making sure her ballot was turned in with consent. 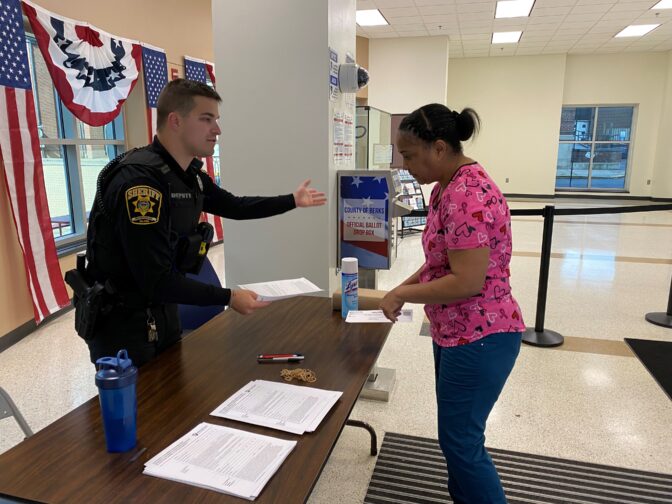 Berks County Deputy Sheriff Riley Gutierrez tells caretaker Lis Mejia that she will have to fill out a form to drop off the ballot Tuesday for her client, 78-year-old Leonor McCoroy.

Mejia dropped off the ballot and form a few moments later.

Mejia was among several voters who interacted with deputies at the county office building during lunchtime Tuesday. Most of the interactions were quick and voters expressed gratitude for their help.

As Berks County heads into the midterm elections next Tuesday, community groups, elected leaders and voters are watching the county as it aims to conduct a smooth and relatively quiet election day.

The county has encountered several highly notable flubs in recent elections but county leaders say this Nov. 8 should not be marred by mistakes like those seen in the past.

One new policy that is gaining attention is that Berks County sheriff’s deputies are asking three questions of voters turning in ballots at drop-off locations:

Deputies were already stationed at the county’s two drop-box locations at the Berks Agricultural Center and the Berks County Services center.

Diana Robinson, the director for civic engagement for Latino and immigrant advocacy group Make The Road Pennsylvania, said she feels like her group’s concerns about the policy have fallen on deaf ears.

“We are currently in a pretty tense moment, and I feel like the county is hearing other voices and not hearing our voices in saying why we think this would not be helpful, why this is harmful for people to participate in our democracy and cast their votes,” Robinson said after the new policy was enacted.

County commissioners recently added the policy that directs sheriffs to ask if ballots are dated and signed, saying it is for the sake of consistency.

Commissioner Chair Christian Leinbach introduced the policy at last week’s election board meeting, apologizing that he did not alert fellow board members before the meeting that he would propose the policy change.

Leinbach said he had only just learned that the same questions are asked when a person drops off a ballot at the election services office. 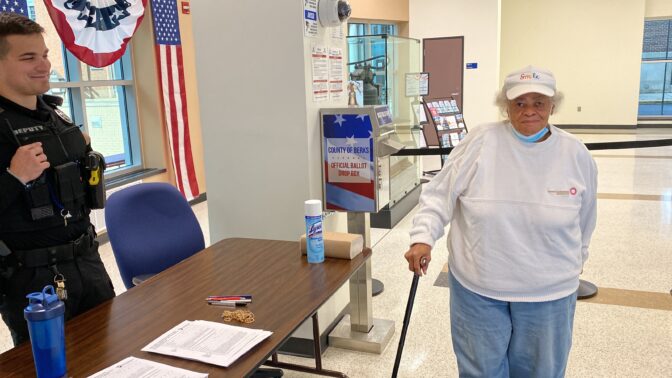 Berks County Sheriff Deputy Riley Gutierrez helped another berks voter cast her drop off ballot Tuesday. She pulled down her mask to pose for a picture.

The commissioners emphasized that deputies are directed to not touch voters’ ballots.

Acting Secretary of State Leigh Chapman sent a letter to Berks County Sheriff Eric J. Weaknecht, expressing her concern that some voters—especially voters of color—may be intimidated while being approached and asked questions by deputies.

“We are encouraging voters, if anything does happen, to call our hotline,” Chapman said in regard to any voter feeling unsafe or intimidated by the presence. “It’s important for people to know their rights. And that’s against state and federal law – voter intimidation – so, please report it to us and we will handle it accordingly.”

On lookout for election crimes

The county’s top prosecutor, District Attorney John T. Adams, said he has been in communication with the sheriff’s office and county leadership. Adams said he is confident that deputies will handle their duties in a neutral and nonpartisan manner.

Adams also said that a deputy may also serve as a deterrent to anyone looking to intimidate voters.

“The fact that we have a deputy sheriff there will prevent intimidation of a voter from occurring,” Adams said. “That intimidation is from some of the, I’ll call them, political people that will do anything to assist their candidate to prevail in the elections.”

Adams added that he understand that the deputies are many times helping voters and others. But, Adams said, his office is not averse to keeping anyone accountable for election violations.

“We would have no issue looking into [accusation against deputies of voter intimidation], Adams said.

Several voters, including voters of color, interacted with deputies and expressed no discomfort about being questioned by WITF. Deputies helped direct people to other appointments in the building, including giving directions to the election services office, where voters can also turn in their ballots. 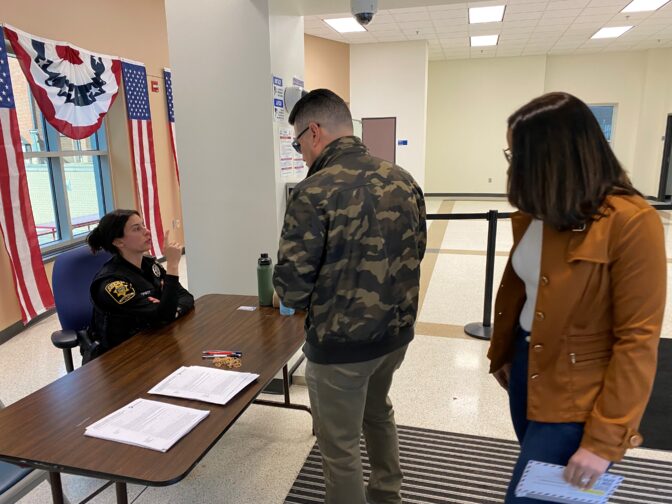 Two Latino voters get directions Tuesday from a Berks County Sheriff deputy to vote early at the election services office in the same building as the ballot drop off box.

Weaknecht did not respond to requests for comment about how his office is proceeding or if he has communicated with the Department of State, as urged by Chapman’s letter.

Civic groups Make The Road Pennsylvania, POWER and Berks Stands Up held a “Party at the Polls” celebration outside of the county services building Wednesday morning.

Robinson said the motivation behind the event was to bring positive reinforcement around voting and to counter any hesitations that voters may feel.

“This event is also to give those voters courage and to feel supported that you have community that has your back and we’re going to celebrate you and we’re going to have your back when you go out to vote,” Robinson said. “We feel that anyone can ask those questions, it doesn’t have to be an armed person.”

Milka Uribe is a voter in Reading and is also a member of Make The Road who dropped off her ballot during the event. 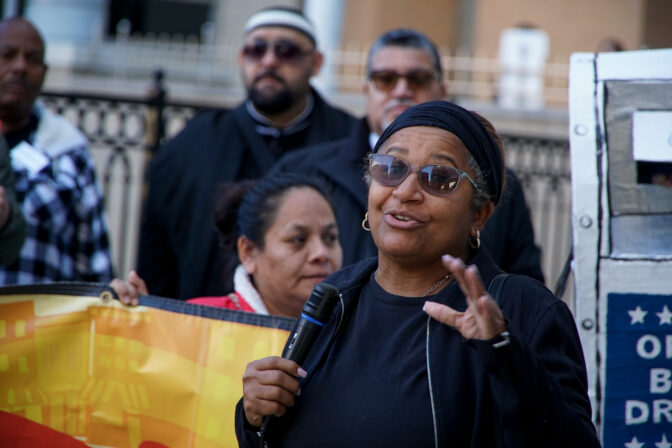 Milka Uribe, who cast her vote during the the “Party at the Polls Makes Voting Joyful in Berks County, Countering Voter Intimidation with Celebration” event speaks outside of the Berks County Services Center on Nov. 2, 2022

Uribe said she’s been a citizen for the past 14 years and votes in every election because of the struggles faced by pioneers before her.

“For me it’s important to vote, first, because we were given the right to vote many years after men could,” Uribe said in Spanish.  “And as a Hispanic woman and American citizen, I make it a point to represent my people; it’s very important that I vote.”

Uribe said she was surprised by the county’s policy to guard the dropoff boxes and question voters.

“Voting is a right, it’s a part of our democracy; why do we need to see police?” Uribe said. “For me, it’s not really a problem but for other people it can be intimidating.” 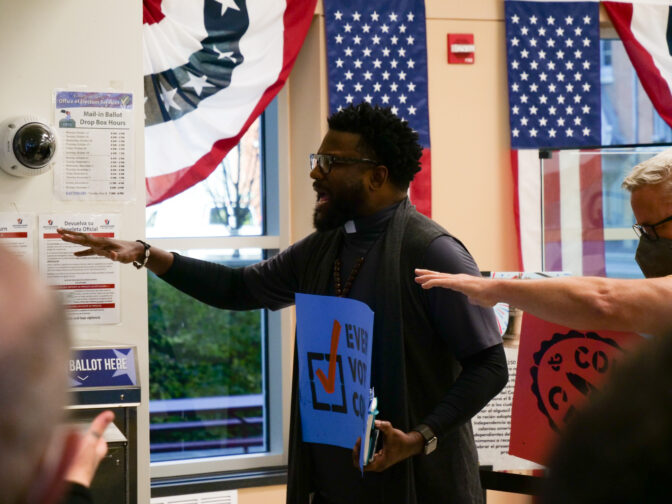 Rev. Lamont Wells, with Evangelical Lutheran Church of America and Power, leads a prayer over the ballot drop box in the Berks County Services Center at the “Party at the Polls Makes Voting Joyful in Berks County, Countering Voter Intimidation with Celebration” event on Nov. 2, 2022

Uribe said when she dropped off her vote, the deputy guarding the box communicated clearly with her in Spanish.

Berks County officials say that electronic poll books will make checking in to vote quick and easy because voters are able to use their date of birth, or even scan their own drivers license.

The process aims to avoid the mishaps such as the hours-long wait voters in a heavily Latino precinct experienced in 2020, when poll workers said “Spanish people and their last names” were problems during the check in process.

The county’s electronic poll books experienced widespread problems during the May primary, caused by the failure of the office to download all registered voter names, according to a county-funded review of the election.

County commissioners said the poll books have been tested and that all polling locations will have physical poll books on hand in the event that the electronic books have any problems.

Last May, the sheriff deputies had to drop off poll books to the county’s more than 200 precincts after problems were reported, causing polls to remain open an hour longer.

Election staff have taken around 15 classes in preparation for the election, according to county spokeswoman Stephanie Weaver. 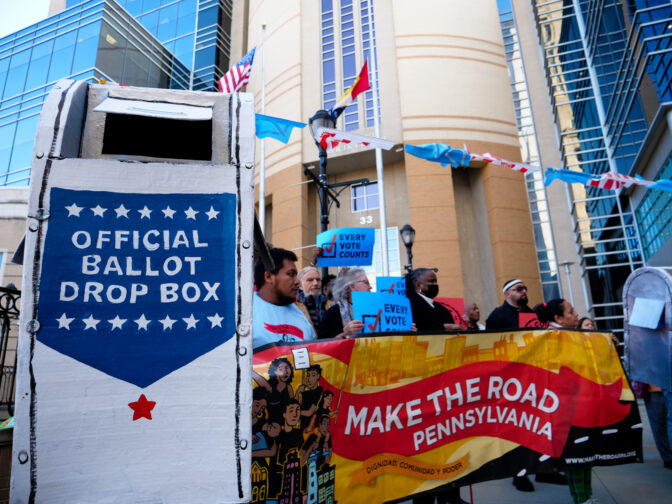 Members of Make the Road Pennsylvania, Berks Stands Up, Power and When We All Vote rally at the “Party at the Polls Makes Voting Joyful in Berks County, Countering Voter Intimidation with Celebration” event outside of the Berks County Services Center on Nov. 2, 2022

That is in addition to classes specifically for judges of election and machine inspectors, Weaver said.

Weaver also stated that the county is fulfilling obligations under the Voting Rights Act by providing translators at all of the county 54 precincts designated as bilingual under federal law.

There will also be an interpreter on hand at the election services office the day of the election to assist with any calls coming in from election staff.