People hug after lighting a candle in memory of Melvin Wax, one of 11 worshippers killed four years ago when a gunman opened fire at the Tree of Life synagogue in the Squirrel Hill neighborhood, during a commemoration ceremony in Pittsburgh on Thursday, Oct. 27, 2022.

For many community leaders, their grief is mixed with dismay over the continued and growing incidents of antisemitism in the United States and beyond.

People hug after lighting a candle in memory of Melvin Wax, one of 11 worshippers killed four years ago when a gunman opened fire at the Tree of Life synagogue in the Squirrel Hill neighborhood, during a commemoration ceremony in Pittsburgh on Thursday, Oct. 27, 2022.

In what has become an annual ritual, Pittsburgh’s Jewish community Thursday honored the memory of the 11 Jews who were murdered on this date in the deadliest antisemitic attack in U.S. history.

For many community leaders, their grief is mixed with dismay over the continued and growing incidents of antisemitism in the United States and beyond.

That included the widely publicized comments of Ye, the rap superstar formerly known as Kanye West, who voiced antisemitic stereotypes in interviews and social media, including a tweet that he would soon go “death con 3 on JEWISH PEOPLE.”

“It is horribly sad that this week as our community tries to remember and heal, we are retraumatized with antisemitism once again making the headlines,” said a statement from Laura Cherner, director of the Community Relations Council of the Jewish Federation of Greater Pittsburgh.

“It is horrifying to see someone with such large platform casually espouse antisemitic conspiracy theories with such conviction and little regard for the violent impact his words may have,” she added. 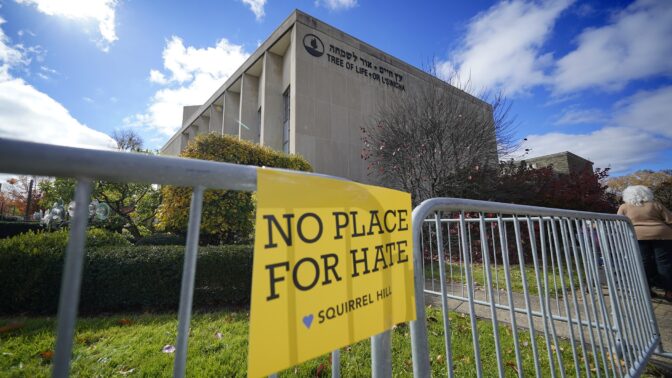 A sign hangs from a fence outside the dormant landmark Tree of Life synagogue in Pittsburgh’s Squirrel Hill neighborhood on Thursday, Oct. 27, 2022, the fourth year since 11 people were killed in America’s deadliest antisemitic attack.

Thursday’s ceremony, held outdoors in Pittsburgh’s Schenley Park on a balmy autumn afternoon, was marked by music, prayers in Hebrew and English, and candle-lighting.

Despite concerns over rising antisemitism, participants said afterward they were focused on remembering the victims and what they stood for in being martyred during worship.

“We’re not defined by the people who would do us harm,” said Lauren Bairnsfather, director of the Holocaust Center of Pittsburgh and one of the event’s speakers. “We’re defined by our culture and tradition and the way we treat people. Remembrance is a strong part of it. I feel rising in me the strong commitment to live a Jewish life.”

Audrey Glickman, a survivor of the attack, agreed. As troubling as comments like Ye’s are, “at least now it’s out in front,” she said. “People can see it, and people are saying, ‘That isn’t good,’ instead of it being underground.”

The Anti-Defamation League recorded 2,717 incidents of harassment, vandalism or violence targeting Jews in 2021 — the highest annual total since it began tracking these incidents in 1979.

“We don’t see any meaningful decrease in 2022,” added Jonathan Greenblatt, the ADL’s CEO.

Words often lead to action, he warned. “There’s a reason that’s so worrying to a community that was worrying before.”

The concern also has risen after former President Donald Trump stated on his social media platform that U.S. Jews need to “get their act together” and show appreciation for Israel “before it’s too late.” Trump said American Jewish voters, most of whom voted for his opponents, failed to appreciate what he has done for Israel.

Jewish advocates say that builds on antisemitic tropes that Jewish loyalties belong more to Israel than the U.S., with Greenblatt saying Trump’s “too late” phrase “sounds like a threat in an environment where Jews already feel threatened.” 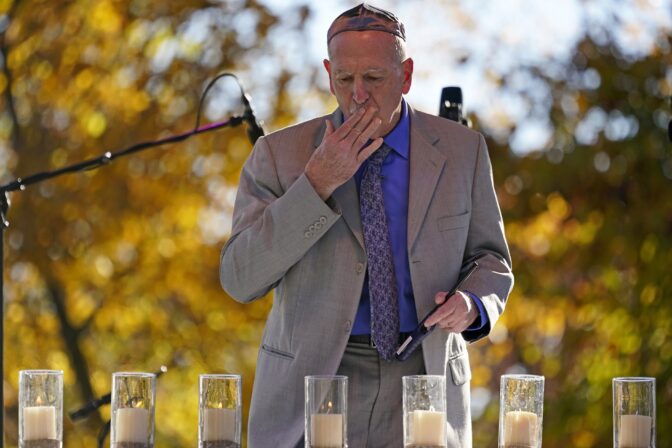 A candle is lit in memory of Jerry Rabinowitz, one of 11 worshippers killed four years ago when a gunman opened fire at the Tree of Life synagogue in the Squirrel Hill neighborhood of Pittsburgh, during a Commemoration Ceremony in Pittsburgh on Thursday, Oct. 27, 2022.

Antisemitism is also on the mind of top political leaders, including President Joe Biden.

In a statement, he mourned the attack: “We stand with the community of Squirrel Hill—and Jewish communities across America and around the world—in resolving to combat antisemitism and hate in all of its forms. This is especially true as we witness an ugly increase in antisemitism in America.

The Tree of Life shootings claimed the lives of 11 worshippers from the host congregation and two other congregations worshipping in its building, Dor Hadash and New Light.

It was followed by deadly attacks at a synagogue in California, a kosher market in New Jersey and a Hanukkah house party in New York, and by a hostage standoff at a Texas synagogue — each committed by assailants who targeted Jews, authorities said.

Rabbi Rick Jacobs, president for the Union for Reform Judaism, said Ye’s words come amid a rise in antisemitism “from the right and the left and pretty much across the spectrum.”

The increase is “in not only rhetoric, but in physical attacks on Jews and the Jewish community,” he said.

A federal judge has set an April trial date for Robert Bowers, who faces more than 60 federal charges related to the Tree of Life massacre, including alleged hate crimes. He has pleaded not guilty. He could face the death penalty.

The three targeted congregations are now meeting in neighboring synagogues. A new Tree of Life nonprofit organization is currently raising funds toward renovating the now-shuttered synagogue as a complex that would house a sanctuary, museum, memorial and center for fighting antisemitism.

Jacobs applauded the move by apparel company Adidas to cut its sponsorship ties with Ye, though he said that is just a start

“To have someone like Kanye West spewing out the hate, the vitriol and the really pure form of anti-Semitism is extraordinarily impactful and painful and needs to have strong responses,” Jacobs said.

Cherner, of the Pittsburgh Jewish federation, said vigilance against antisemitism must be constant.

“The Jewish community fears that after a handful of non-Jewish celebrities speak out with a generic statement about condemning antisemitism, we will never hear from them on the topic again,” she said. “The community is tired of saying ‘Never again’ when antisemitism continues to be on the rise and Jews continue to be targets of conspiracy theories and violence.”

Holly Huffnagle, U.S. director for combating antisemitism at the American Jewish Committee, noted that it was Ye’s “death con” tweet “where everyone woke up.”

But Ye had gotten by with much less controversy after making numerous other troubling comments, she said, such as associating Jews with greed and secret power.

Ye also seeming to draw on claims that have circulated in some Black nationalist circles, that Black people rather than modern Ashkenazi Jews are the true descendants of Israel, Huffnagle said. The attackers of the New Jersey kosher market shared that ideology, she said.