Nikita Rain, a Hershey-based music teacher and performer, shows Ollie the basics of playing the ukulele.

One Lancaster County trans student finds space to be himself, despite backlash against LGBTQ issues in schools

Ollie said he came out as transgender before schools closed down due to the COVID-19 pandemic. 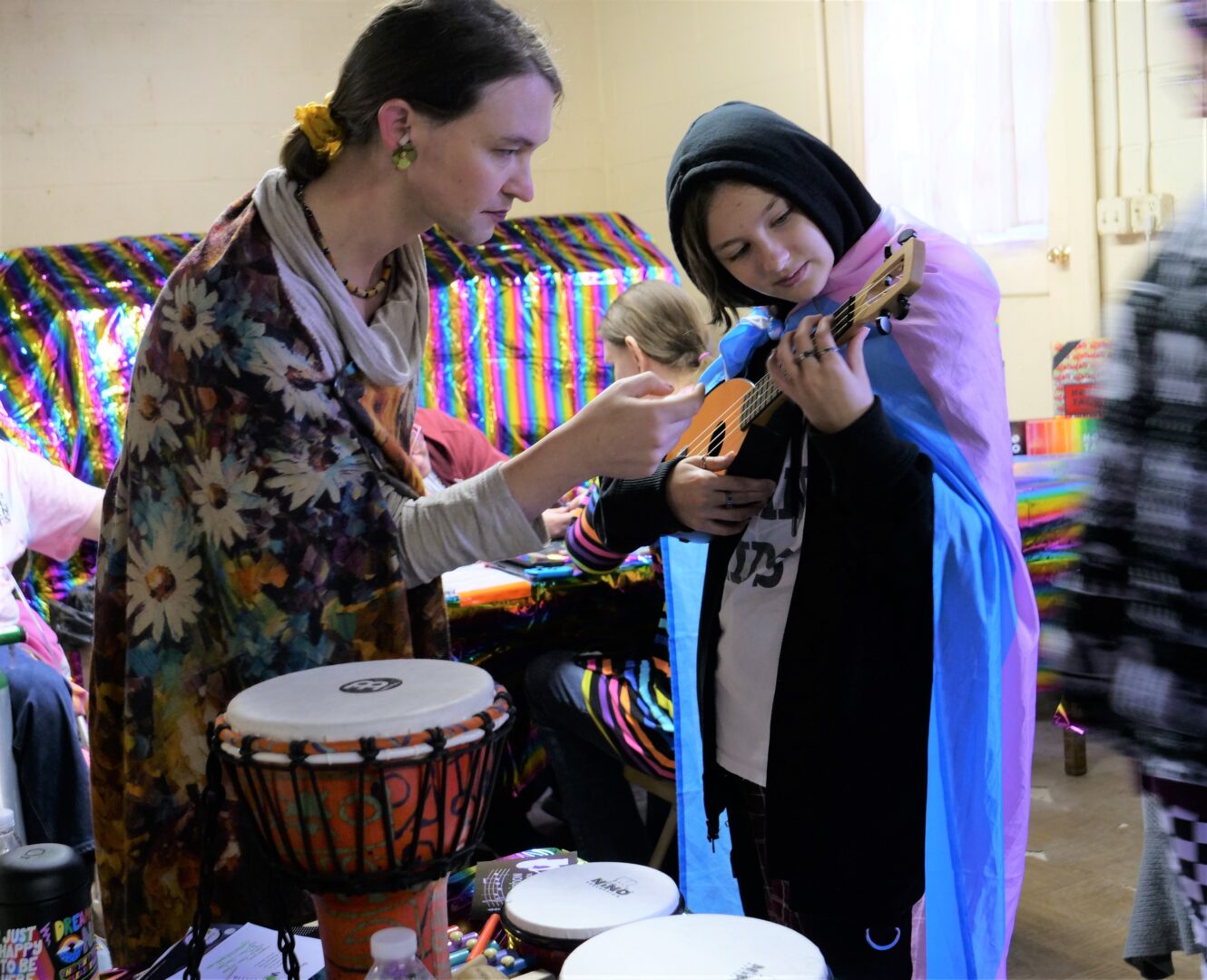 Nikita Rain, a Hershey-based music teacher and performer, shows Ollie the basics of playing the ukulele.

witf · One Lancaster County trans student finds space to be himself

Ollie Wenditz likes to play video games and hang out with his friends outside. He likes to make up songs and write them down on the Notes app on his phone so he can sing them to his parents and friends.

And he’s thrilled about a change that greeted him this year.

For the first time, the name “Ollie” is on his school documents and his student ID. His dead name – the name given to him at birth – was crossed out. The name is still on the school’s official paperwork at Landisville Middle School, which is why in previous years there the staff would sometimes misgender him.

But this year Ollie’s school counselor went to all of Ollie’s teachers and told them that his name is Ollie and he goes by he/him pronouns.

“It was incredible,” Ollie said. “It made me feel super excited, and I love that about this year.” 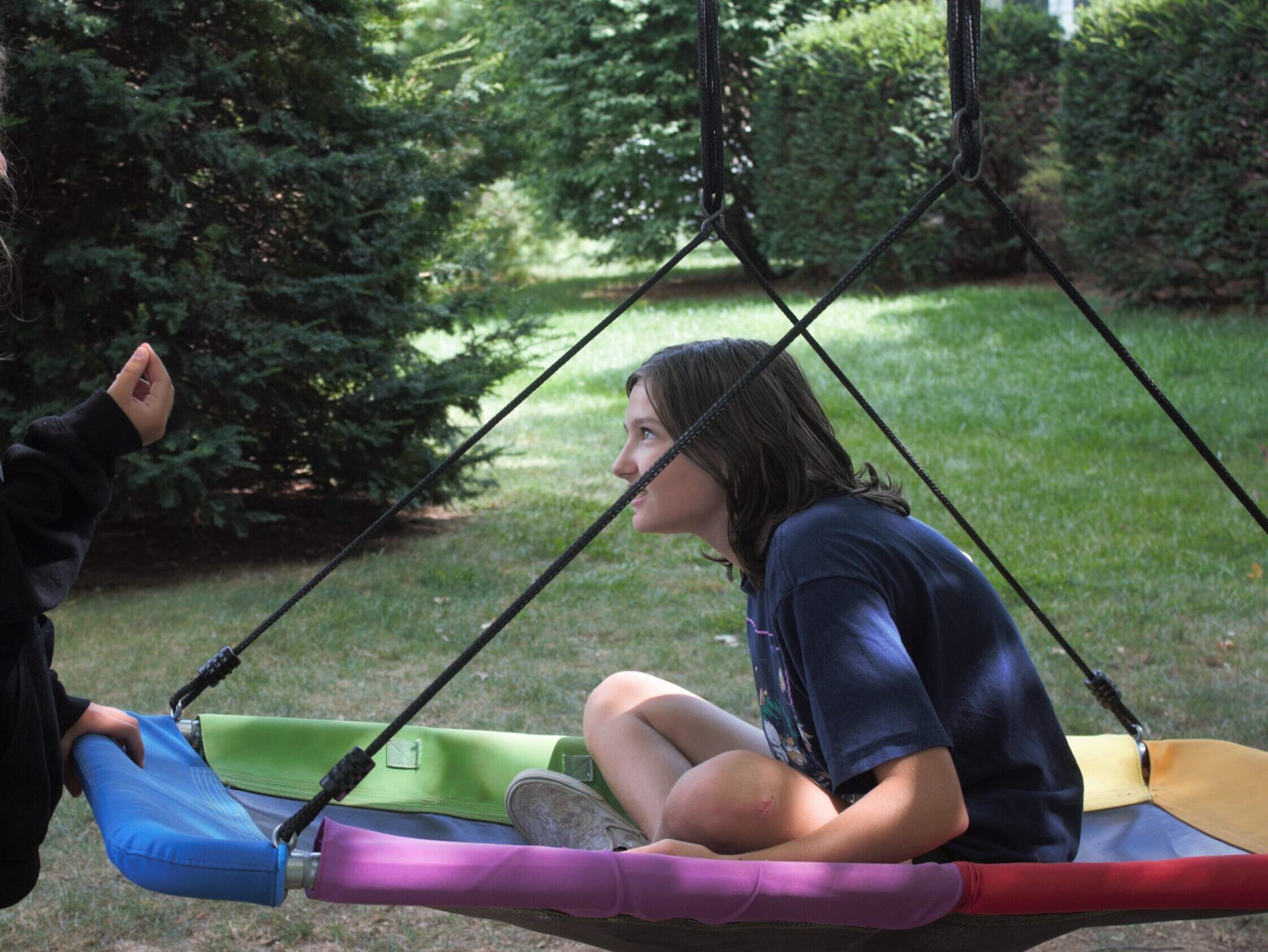 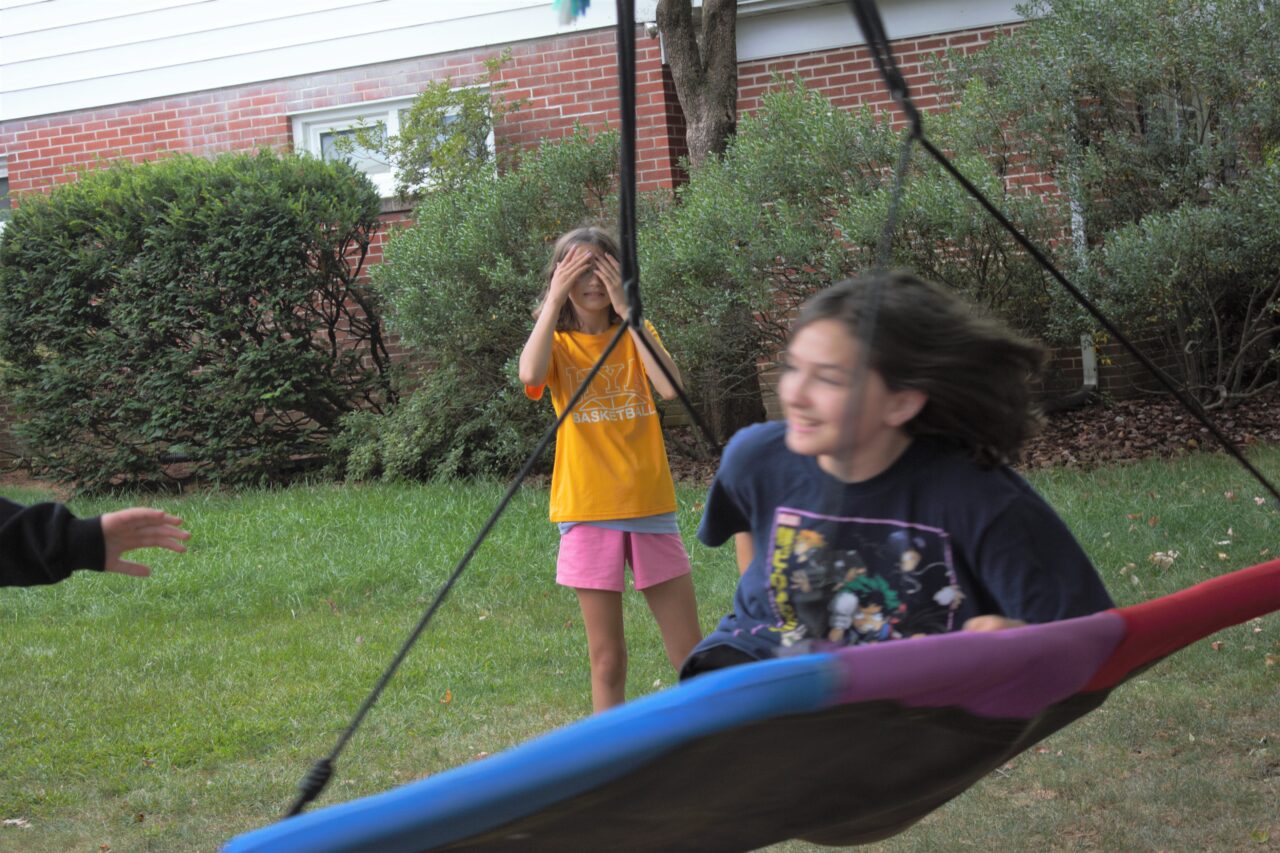 The use of pronouns and chosen names has become a major focus for conservative politicians in Pennsylvania and other states. This year, Florida enacted what critics call the “Don’t Say Gay” law, which prohibits classroom discussions of  gender identity and sexual orientation in kindergarten through third grade.

Nearly two dozen state lawmakers called on Secretary of Education Eric Hagarty to resign because the Department of Education website offers optional LGBTQ resources and sample curriculums that teachers can implement in their classes.

One assumption behind efforts to ban classroom discussions on gender identity is that such topics are confusing and upsetting for children. But a 2017 study published in Science found that children as young as 5 begin to internalize harmful stereotypes about gender. That is why some experts recommend teaching about gender at an early age.

Ollie has been playing club basketball since around 4th grade. Before coming out as trans, he would play on girls teams. He was hoping he could try out for the boy’s middle school basketball team for the first time.

But Ollie’s school district passed an athletic policy in July that restricts how trans students can compete.

Hempfield School District’s athletic policy says that a parent has to designate a student’s sex assigned at birth when registering a student for a sport, which will remain on the school’s record “unless the Superintendent or Athletic Director has reasonable cause to believe that the student’s sex is other than designated.”

In a statement on behalf of Landisville Middle School’s principal, Shane Mack, the district’s spokesperson said the school board’s athletic policy would be  “followed as written, when and if the need arises.”

Ollie’s mother, Lynn Wenditz, said she reached out to the athletic department to ask if Ollie could try out for the middle school boy’s basketball team. The school acknowledged her question, but has not given a definitive response.

“Kids need to feel safe around adults,” she said. “And the school board, by default, has made it a not safe place for him.”

Ollie, one of the few transgender students at his school, spoke up against the policy at school board meetings. Others there would often refer to transgender girls as “biological males.” 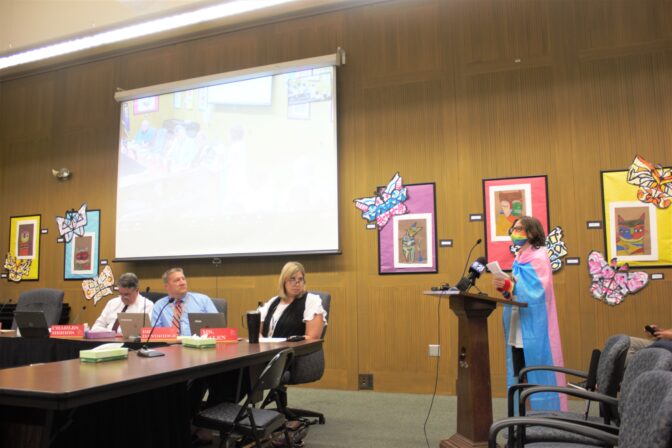 Ollie Wenditz, 14, spoke at the meeting: “I am interested in sports, and if I were to try out for the basketball team, I would not at all want to be on the girls’ team. That would make me feel uncomfortable and not true to myself.”

At a June meeting, a resident compared identifying as trans to identifying as an animal: “ If we allow a boy that identifies a girl to choose the gendered sport they will play on the, where do we draw the line? What team do we put the kids that identify as a cat, dog or ghost on? Do we eventually also need to start forming teams for the kids who identify as animals so they don’t feel excluded?”

Lynn said it has been difficult to shield Ollie from such talk.

“You have a handful of kids who are hearing from these very vocal groups about how they’re wrong, how there’s something wrong with them, they’re not right,” Lynn said. Those students are internalizing that, she said, “and it’s heartbreaking.”

Recent studies from GLSEN, an LGBTQ anti-bullying organization, found that LGBTQ students generally feel unsafe in athletic spaces.  LGBTQ students were “half as likely” as non-LGBTQ students to participate in sports. Those who compete have better mental health outcomes, according to the study.

Horwitz said they would not be the person they are today if it were not  for their experiences competing in team sports according to their gender.

“My values, my determination, my passion, my teamwork -– all of these, all these beautiful, individual pieces that are the collage that made me who I am today -– are from the athletic spaces and the access that I’ve had,” Horwitz said.

Ollie said he came out as transgender before schools closed down due to the COVID-19 pandemic.

“I thought I was non-binary at first, and then it kind of just like progressed into like me realizing, ‘Oh, I’m not non-binary, I’m a guy’ “

While Ollie said that he has “never felt connected to his femininity,” he still described his relationship to his gender as fluid.

“Some days, I want to be super-masculine. I want to wear baggy stuff. I want to wear a binder, and stuff like that, and other days it’s like, ‘no, I don’t care. I’ll wear whatever. Whatever feels good,” Ollie said.

Coming out to friends as trans was easy, Ollie said. A lot of them are also in the LGBTQ community. Nobody questioned Ollie as to why he realized he was a boy. Instead, they asked what his pronouns were.

Ollie’s parents were supportive when he came out  as trans, although they do admit, they were unfamiliar with different queer identities. When Ollie had previously come  out as non-binary – not identifying with any gender – Lynn was unsure what that meant. “Demiboy,” which refers to someone who partially identifies as a boy, was also an unfamiliar term. They said Ollie has taught them how to view gender in a different way. 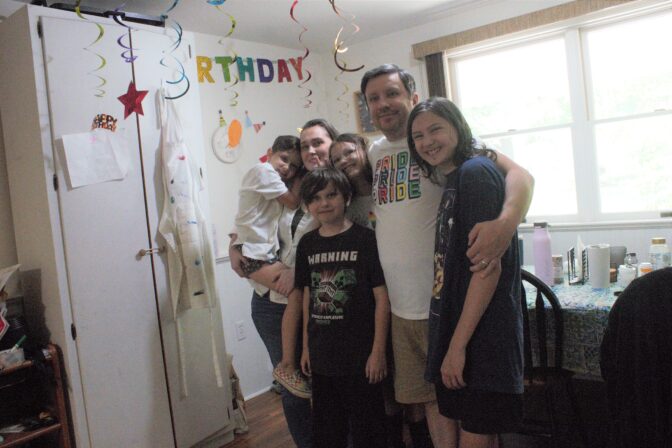 The Wenditz family poses for a portrait in their kitchen.

Kenny, Ollie’s father, grew up in an evangelical Christian household. His own father would read the Bible before going to bed every night. His father once questioned whether Kenny was gay because he was carrying around a Cabbage Patch doll, and asked Kenny’s mom about it.

When Ollie came out as transgender, Kenny immediately offered his support. But he also admitted that he did not understand and that he needed to “do some research.”

A recent study shows that children begin to identify as transgender or non-binary and begin to experience gender dysphoria at age 7. Another study in the journal Psychological Science showed that the feelings transgender children have about their gender identity are “deeply held,” and not mere confusion.

Another Lancaster county mother said learning to care for her transgender child was a learning process.

Nikki Rivera, a Spanish teacher and advisor of the Gender and Sexuality Alliance at Warwick School District, has a transgender child who came out in high school. In retrospect, Rivera feels she “dropped the ball” for not identifying the signs of gender dysphoria early in her child’s life. That included not wanting to  identify with the sex they were assigned at birth and anxiety about being seen in a bathing suit.

“We just didn’t associate it with gender. We associated it with OCD, and some other types of things we thought could have been the issue,” Rivera said. “I wish early on, somebody had said, ‘let’s investigate gender identity,’  and that would have saved us maybe years of misunderstanding.” Rivera penned a column, in which she shares some of her experiences as a mother of a transgender child.

Ollie faced bullying in the first week of school this year. A student in English class sexually harassed him verbally and misgendered him at the same. Last year, a student made a comment about using an LGBTQ hotline to hunt down gay people.

But Ollie has also been able to find community at school through his school’s Gender and Sexuality Alliance, which he helps lead. Erika Rhodeside, a librarian at Landisville Middle School and advisor to the GSA, said there are about 60 students in the club. About a quarter are allies and the rest are members of the LGBTQ community, Rhodeside said.

“When kids come from such a small elementary school, LMS feels huge, and it can be really overwhelming, and I think this is a really good opportunity to find other people who have similar interests and similar concerns and similar identities. It really helps students find where they belong,” Rhodeside said.

As a protest against Hempfield’s athletic policy, Ollie has encouraged other students to wear pins and stickers advocating LGBTQ rights.

“GSA has helped me feel seen and heard and feel like myself,” Ollie said. He is on the club’s  activism committee.

At the same time, Ollie said, he and other student GSA members this year are careful about the activities they plan. When another Hempfield GSA hosted an after-school drag show at the high school, the district put three staff members who advised the club on administrative leave. Two were transferred to other staff roles in the district, according to LancasterOnline. 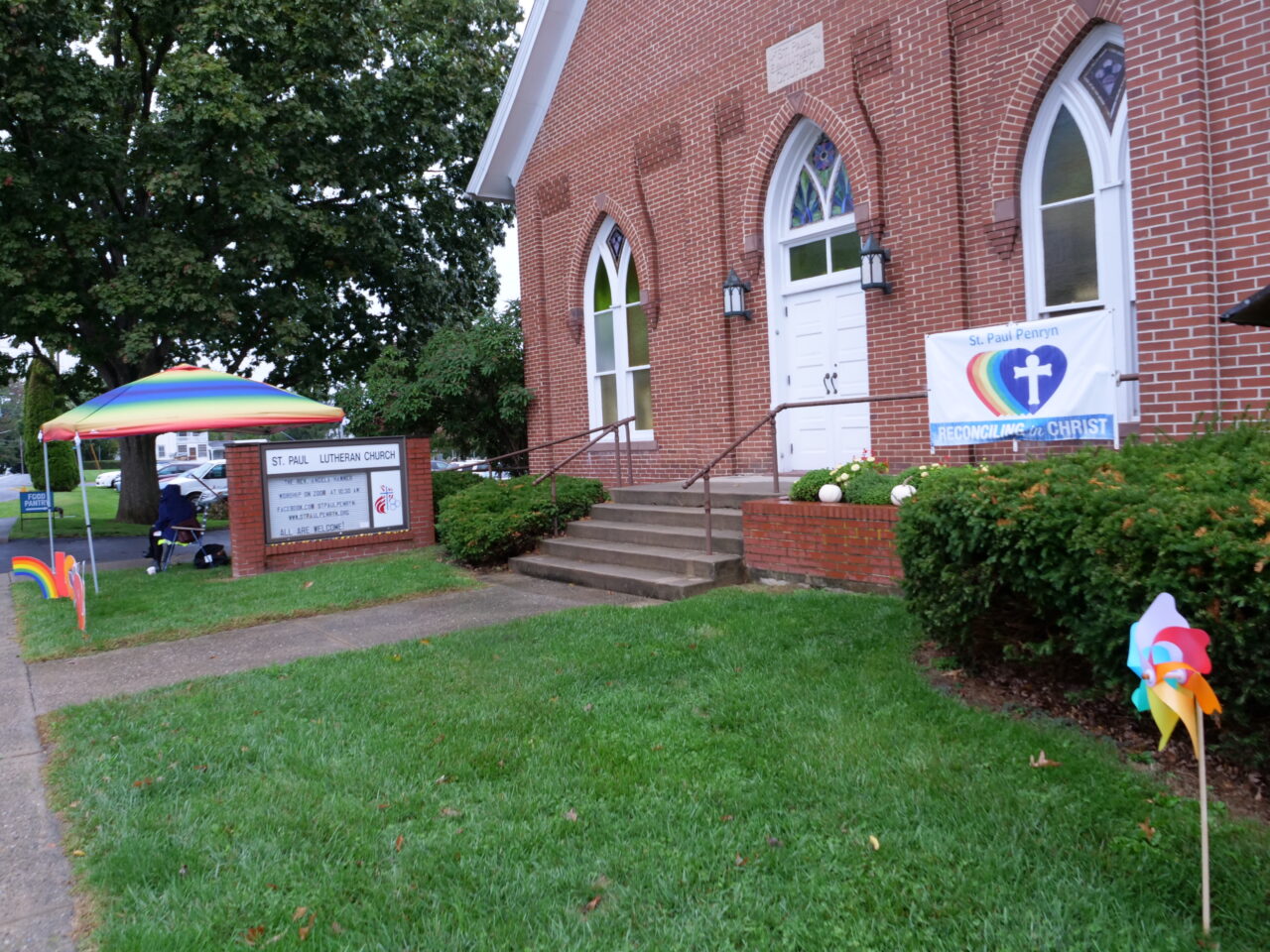 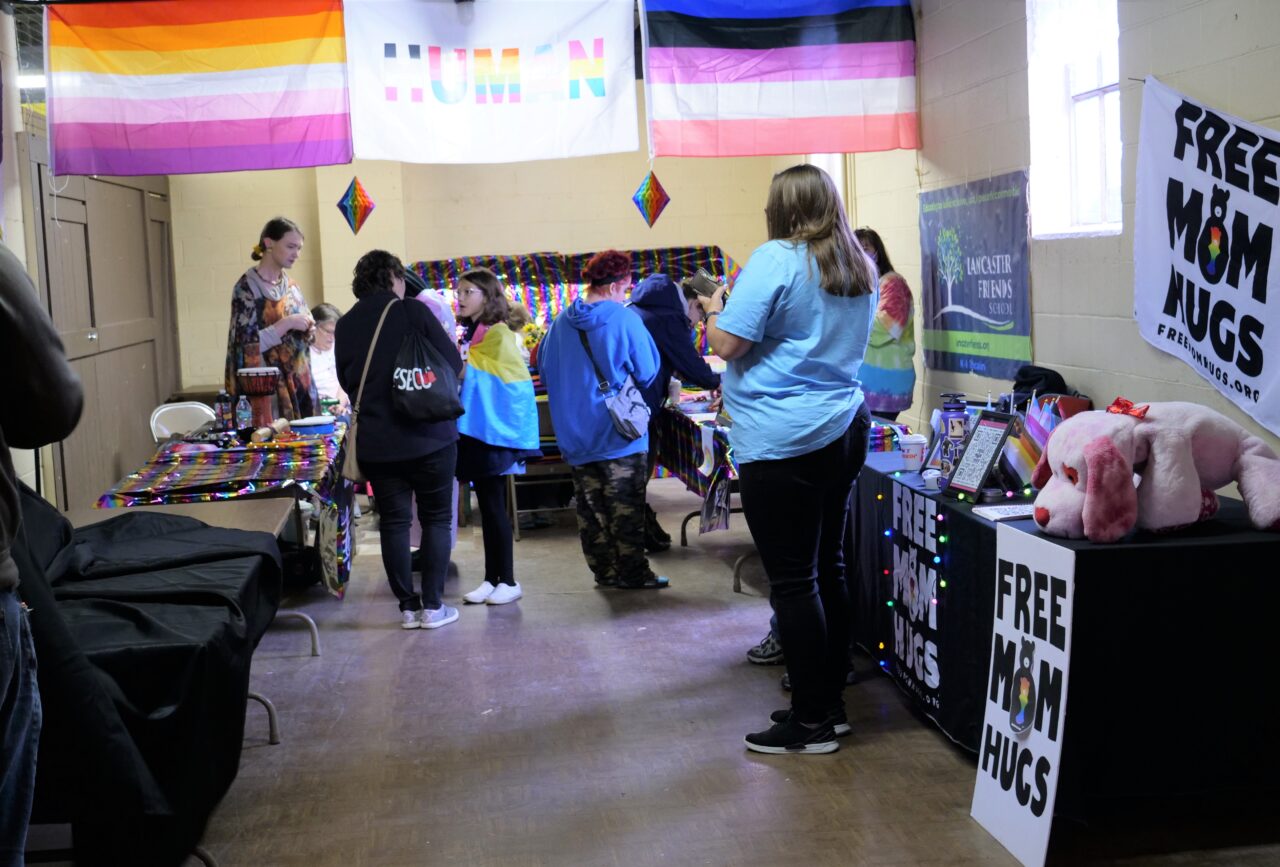 In the heart of conservative Lancaster County, Ollie finds support from various LGBTQ resource centers. Lititz Chooses Love, a center that provides resources to LGBTQ youth, is one of them. Parker Webb, president and co-founder of the center, organizes community events and helps to create LGBTQ affirming spaces. He also works with the GSA club from Lancaster County school districts.

At a recent Coming Out fest in Manheim, Ollie was invited to speak about his own journey in front of other young queer people. Ollie hopes that being vocal against anti-LGBTQ policies and being open about his own identity will inspire other students to speak up as well.

“It’s amazing to see kids their age stepping up and doing so much, but he shouldn’t have to,” Webb said. “That’s the shame of it, is he’s having to grow up real fast and do this stuff. That shouldn’t have to be asked of a kid so young.”