No quick fixes for Steelers, Mike Tomlin during nightmarish start 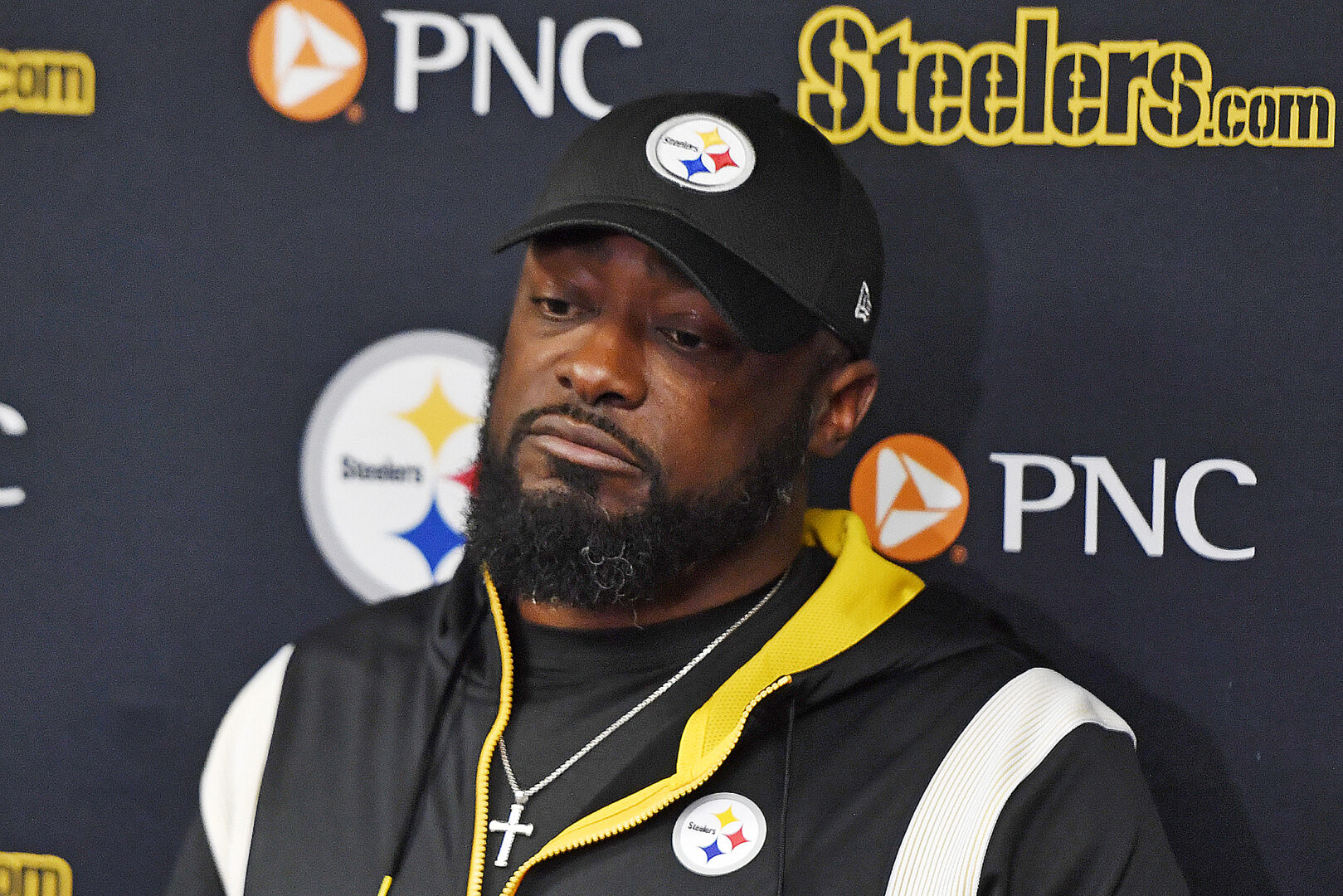 For nearly two decades the Pittsburgh Steelers seemed immune to the realities of the NFL.

Seasons came, seasons went. And the Steelers stayed relevant. In the mix. A factor even as the fortunes of their AFC North rivals — Baltimore chief among them — and the vast majority of the rest of the league rose and fell and rose again, just the way it’s supposed to work under the salary cap.

During coach Mike Tomlin’s first 15 years on the job, Pittsburgh played exactly one game in which it was eliminated from playoff contention.

It’s a figure that seems all but certain to climb by several multiples in 2022 after the Steelers fell to 1-4 during an embarrassing 38-3 loss to Buffalo on Sunday.

“We just got smashed today,” Tomlin said shortly after the franchise’s worst setback in 33 years, a dismantling that exposed a staggering gap in talented depth between the two teams.

The Bills hardly missed a beat despite missing tight end Dawson Knox and safety Jordan Poyer, among others. Buffalo rookies were making plays all over the field. Wide receiver Khalil Shakir caught the first five passes of his career. Running back James Cook ran by a group that included linebackers Jamir Jones and Ryan Anderson — both of whom were on the practice squad at the start of the season — to the end zone for his first score. 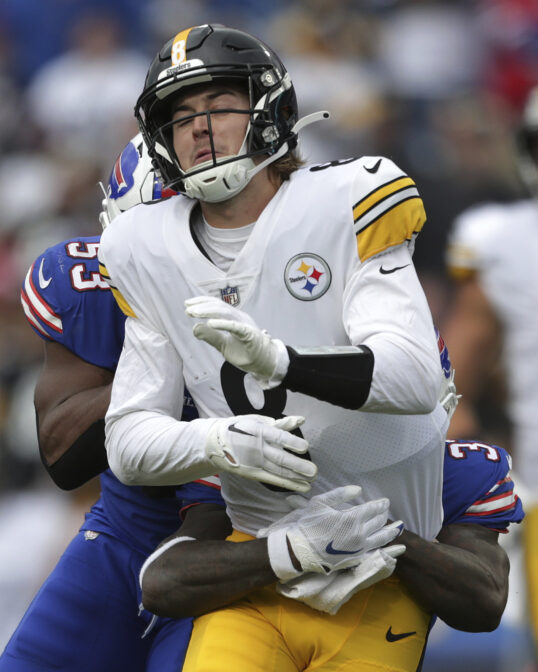 Pittsburgh Steelers quarterback Kenny Pickett is hit by Buffalo Bills linebacker Tyrel Dodson and Siran Neal, right, after getting off a pass during the second half of an NFL football game in Orchard Park, N.Y., Sunday, Oct. 9, 2022. The Bills won 38-3.

The Steelers have made signing their best players (linebacker T.J. Watt, safety Minkah Fitzpatrick, WR Diontae Johnson) to lucrative extensions a priority, moves that require them to find good players on the cheap.

The same team that found gems in players that became roster fixtures such as Antonio Brown (sixth round), linebacker Vince Williams (sixth round) and Ramon Foster (undrafted) and Alejandro Villanueva (free-agent signing) has swung and missed far more often than not in recent years. The decision to use high picks on offensive skill position players such as running back Najee Harris and wide receiver Chase Claypool rather than fortify the trenches in an effort to prop open the championship window under Ben Roethlisberger appears ill-advised.

Roethlisberger isn’t around anymore to cover up the warts on offense. Watt is out indefinitely with a left pectoral injury. Fitzpatrick is banged up. And the defense is a mess in their absence.

The Steelers have been 1-4 before on Tomlin’s watch, pulling themselves out of a massive hole to nearly reach the postseason in 2013. 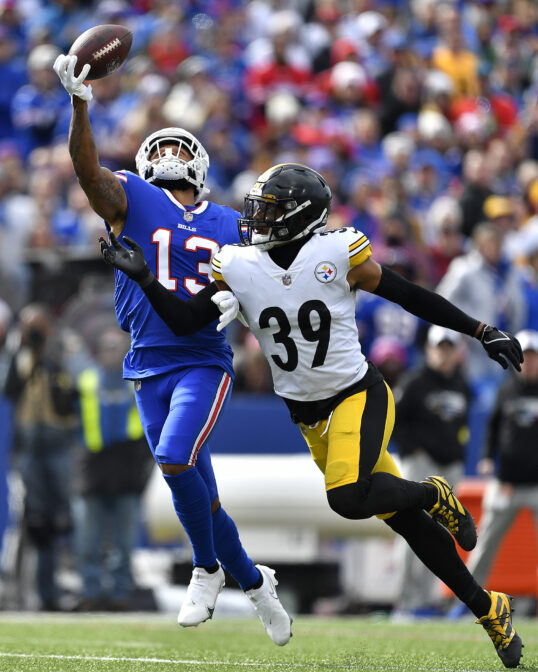 Buffalo Bills wide receiver Gabe Davis (13) makes a one hand catch for a touchdown, with Pittsburgh Steelers safety Minkah Fitzpatrick (39) defending during the first half of an NFL football game in Orchard Park, N.Y., Sunday, Oct. 9, 2022.

They’ve gotten blown out before on Tomlin’s watch. Last year alone they followed 31 and 26- point losses with victories the following week.

Yet the resiliency that’s been the trademark of Tomlin-coached teams seems far away at the moment.

Not with the offense 30th in the league in scoring. Not with practice squad players filling in for an injury-ravaged defense. Not with the very small margin for error the Steelers needed to work within as they began the post-Roethlisberger era — don’t turn the ball over and hope the defense reverts to its 2020 version — obliterated well before Halloween.

Tomlin promised “to turn over whatever stone to change the outcomes of games like what transpired today.”

The stones they’ve turned over on the roster have yet to make a significant positive impact. Their short-term options are basically limited to raiding other team’s practice squads or signing guys off the street. 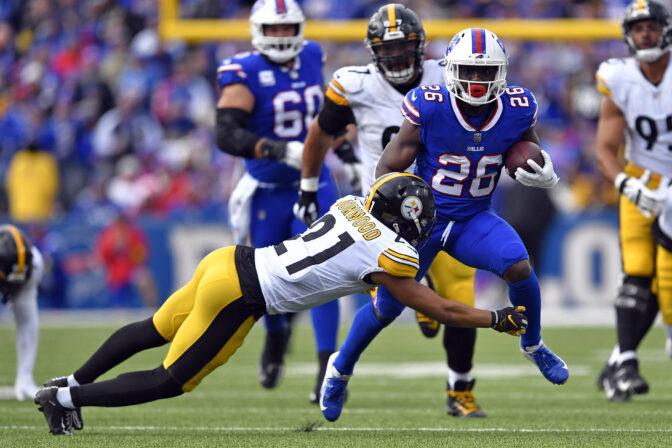 The chance at real solutions likely won’t come until free agency and the 2023 draft.

There are 12 more games remaining in 2022, a dozen more up-close looks at the harsh realities of a business model the Steelers are discovering they are no longer immune to.

The decision to turn to rookie quarterback Kenny Pickett looks like the right move. Pickett appeared to be two things against the Bills: fearless and decisive, qualities Mitch Trubisky failed to show with any sort of consistency during his 3 1/2 games at the helm.

Everything else pretty much. Tomlin wasn’t lying when he said it’s all interconnected. Yet the best way to take some of the pressure off a beat-up and underperforming defense is by scoring more.

The Steelers have six offensive touchdowns through five games. Cleveland running back Nick Chubb has seven.

Cam Heyward. The defensive end’s No. 97 was in relentless pursuit of the ball on Sunday regardless of the circumstances or who was around him, a testament to his professionalism and the example he is trying to set.

Harris. Maybe it’s the foot injury he suffered during training camp. Maybe it’s the lack of push by the offensive line in front of him. Maybe it’s the scheme. Whatever it is, the second-year running back has been unable to get it going. He is averaging a paltry 3.2 yards per carry through five games and has looked like the lesser of the two options next to backup Jaylen Warren.

0 — the number of touchdown receptions by Pittsburgh wide receivers in mid-October. 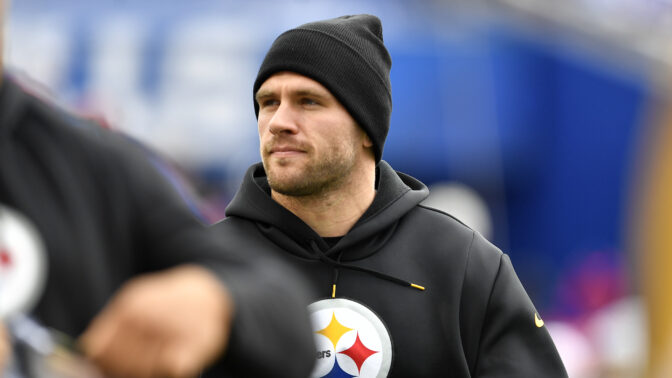 Pittsburgh Steelers linebacker T.J. Watt walks on the sideline during the first half of an NFL football game against the Buffalo Bills in Orchard Park, N.Y., Sunday, Oct. 9, 2022.

Tight end Pat Freiermuth sustained a concussion in the third quarter that appeared to leave him briefly unconscious on the field. It’s his third concussion in less than two seasons, a troubling trend for a promising young player. … DT Larry Ogunjobi left with a back injury and did not return and the secondary remains a shambles, with Levi Wallace (concussion) and Cam Sutton (hamstring) joining the injury list.

Find some semblance of pride while trying to do something that’s been particularly problematic over the years: beat Tom Brady. The Tampa Bay QB is 9-3 against Pittsburgh in his career, with 29 touchdowns against five interceptions.