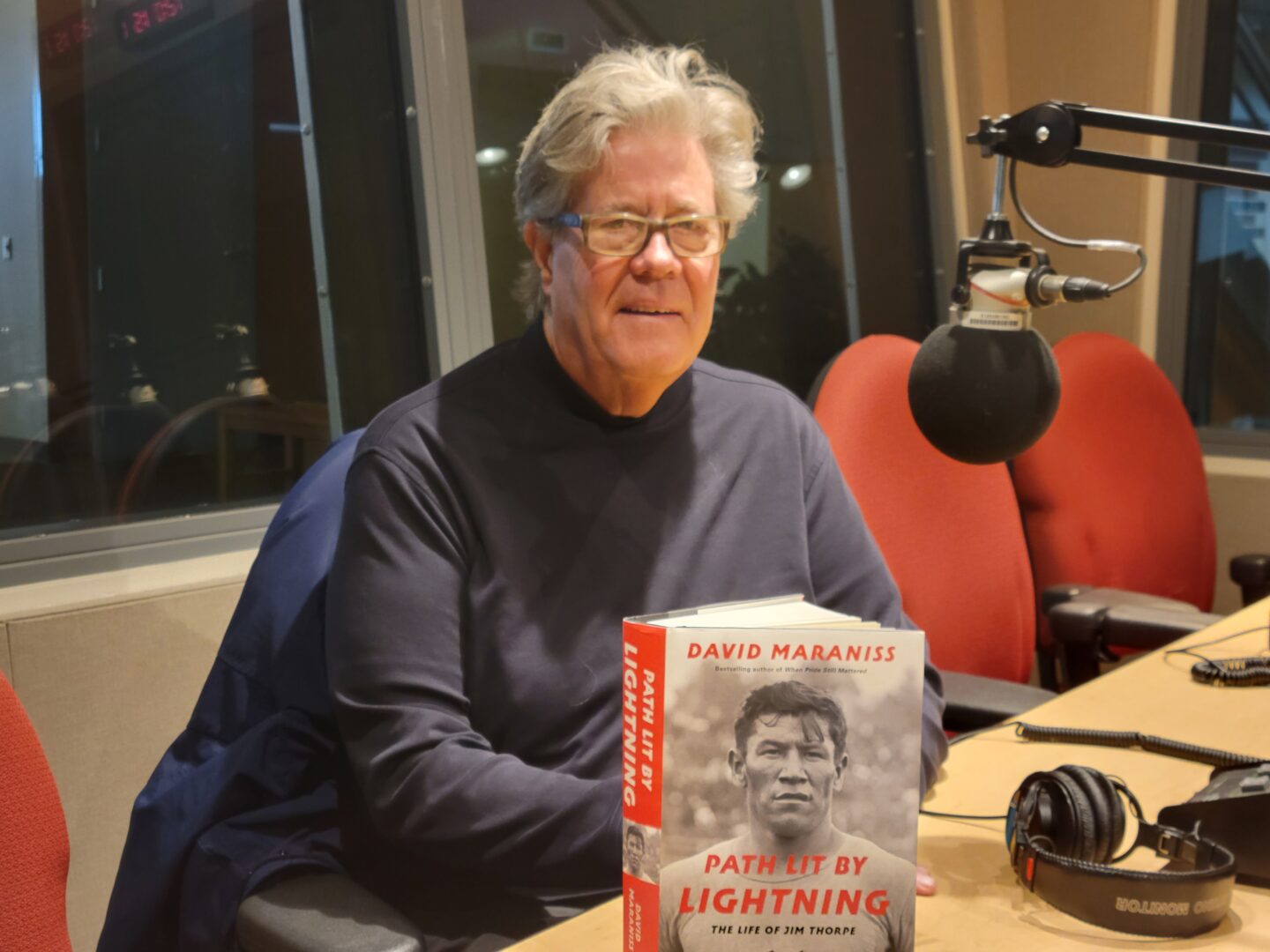 Many consider Jim Thorpe the greatest athlete the U.S. has ever produced. Thorpe won two gold medals at the 1912 Olympics, was an All-America football player at the Carlisle Indian School, was elected to the first class of the Pro Football Hall-of-Fame and played Major League baseball for the New York Giants and many other professional baseball teams.

Off the field and especially after he got older, Thorpe led a troubled life that included alcohol, poor finances and three marriages.

Many people also used Thorpe’s fame and native American heritage to their advantage.

Maraniss appeared on Tuesday’s Smart Talk and said Thorpe’s time in Carlisle may have defined him,”The Carlisle Indian Industrial School is at the center of the book was actually founded in 1879, only three years after the Battle of the Little Bighorn. And the first young students who came there were Lakota Sioux, who were the sons and daughters of the people, you know, the warriors who fought against Custer. So the notion was to drum out of them all of their Indianess, their language, their religion, their culture, cut their hair and dress them in the uniforms of the U.S. Cavalry. So that was the way it was meant to it was intended to do. And Jim Thorpe came along, a quarter century after that. And Carlisle, for him, was both the best of times and the worst of times. You know, it was only because of Carlisle that he gained world fame. It was there that he became the all-American football player and went to the Olympics in 1912 from Carlisle. So he would say that it was one of the better times of his life, but it was also a place that was dehumanizing in so many respects, and in the end it had that effect on him as well.”

Thorpe’s Olympic medals were taken from him when it was founded that he played minor league baseball for two seasons and thus deemed a professional athlete. But Maraniss makes the point he wasn’t alone and people around Thorpe lied to save themselves in the scandal,”First of all, he did play for the in the Eastern Carolina League at a time when scores of college players were doing that. But most of them played under aliases. There were so many in the Eastern Carolina league, it was called the Pocahontas League because everyone was named John Smith. Dwight Eisenhower played under the name Wilson in the Kansas State League. So that’s number one. Jim Thorpe played under the name Jim Thorpe. He never tried to hide. Secondly, several very important people who made the decision to return his medals knew what he’d been doing beforehand, including Pop Warner, his coach at Carlisle, Moses Freedman, the superintendent at Carlisle, and James Sullivan, the head of the Amateur Athletic Union and of the American Olympic Committee, the most powerful amateur figure in the country. All three of them knew but lied about it to save their own reputations. Then you have the question of what’s an amateur and what’s a professional. On that Olympic team was George Patton, who played who competed in the modern pentathlon, which is all military events, you know, fencing, equestrian target shooting. He was being paid by the U.S. Army to train for those events. Is he a professional or an amateur? Jim Thorpe played baseball, which had nothing to do with the decathlon and pentathlon. The entire Swedish national team was given a paid leave of absence for six months before the Olympics to train. Are they professionals or amateurs? So you’re right. I think Jim Thorpe was thrown under the bus. And then you finally have even a technical reason that he shouldn’t have lost his medals, which was that any challenge had to be lodged within 30 days of the end of the Olympics in this game, six months later. So morally, hypocritically and even technically, it was wrong.”

David Maraniss appears at Bosler Memorial Library in Carlisle for Whistlestop Bookshop Tuesday at 4:00 PM until 6:00 PM and then Wednesday at 7 p.m. at Midtown Scholar Bookstore in Harrisburg.