The court has scheduled a public memorial service at 10 a.m. Tuesday at Duquesne University to honor Baer. 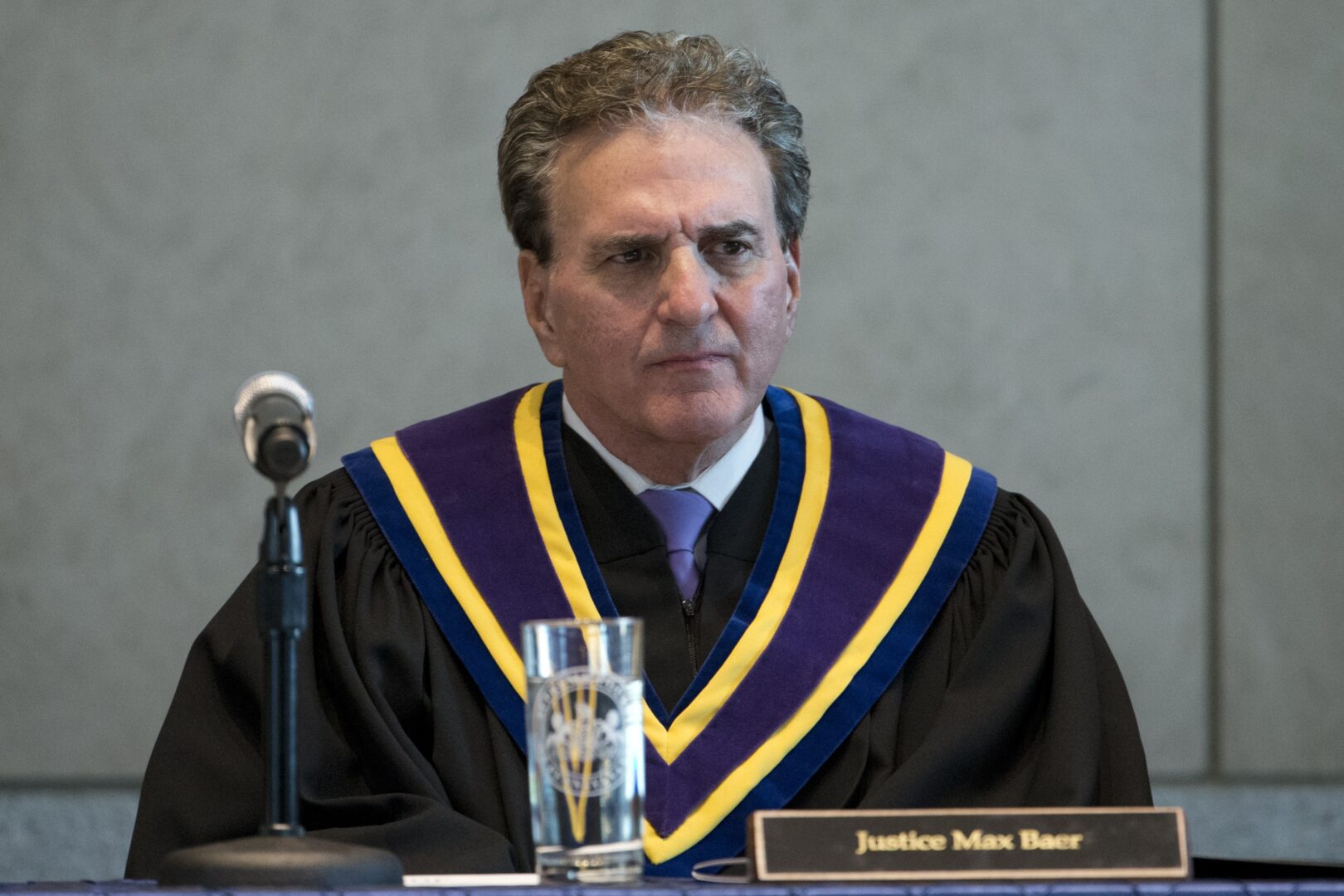 Max Baer, who became the chief justice of Pennsylvania’s highest court just last year and was set to retire in a few months, has died at his home in suburban Pittsburgh. He was 74.

A cause of death was not immediately available. During a 33-year judicial career that began in Allegheny County, Baer was recognized regionally and nationally as an advocate for children, families and court reforms to benefit both.

The service is planned for the Charles J. Dougherty ballroom on the fifth floor of Duquesne’s Power Center at 600 Forbes Ave. The court also plans to live-stream the service and will provide additional information when it has determined arrangements to access the service virtually.

Justice Debra Todd now succeeds Baer as chief justice — a role she had been slated to take on at the end of the year, when Baer reached the mandatory retirement age of 75. In a statement Saturday, Todd called his death “a tremendous loss for the court and all of Pennsylvania.” A Democrat, Todd will be the first woman to hold that post.

“Pennsylvania has lost a jurist who served the court and the citizens of the Commonwealth with distinction,” Todd said in a statement released by the court Saturday morning.

“Chief Justice Baer was an influential and intellectual jurist whose unwavering focus was on administering fair and balanced justice. He was a tireless champion for children, devoted to protecting and providing for our youngest and most vulnerable citizens,” she said. “His distinguished service and commitment to justice and fairness spanned his decades on the bench.” 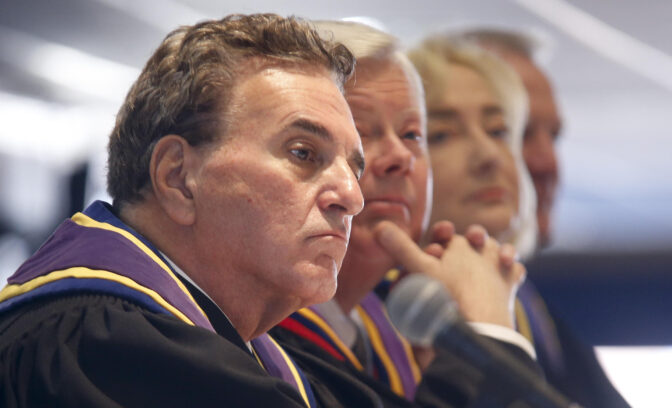 Allegheny County Executive Rich Fitzgerald also spoke of Baer’s impact during his career as a county Common Pleas judge, and later as a member of the Supreme Court and as its chief justice.

“Max’s heart and passion for those who were in need, particularly families and children, was well known and evident in much of his work. His efforts to raise money for kids, through the music fund that raised money through an annual concert and the annual comedy night, a highlight of the political season, were unmatched,” Fitzgerald said in a statement Saturday.

“He will be sorely, sorely missed. We extend our deepest sympathies to his family and friends, and thank them for allowing this community and state to have him as an advocate for justice for so long.”

Baer, of Mt. Lebanon, was one of five Democrats on the court, but he was also the court’s likeliest “swing justice,” who was wary of sudden shifts in the law. He joined the Democratic majority in a 2018 ruling that set aside the state’s Congressional map — a move that enhanced Democrats’ ability to compete in a purple state where the Congressional delegation had been dominated by Republicans. But he dissented from parts of the ruling that set a rapid timetable for drafting a new map prior to the 2020 Census.

“He was a very careful justice, and he’s hard to characterize,” said Bruce Ledewitz, a law professor at Duquesne University. “He wasn’t ideological. And he was more interested in results than in reasoning. That’s not a criticism: He was always looking for consensus on the court, and that made him a very effective chief justice.”

“It’s a great loss to the court,” Ledewitz added. “And obviously very unexpected. He was a very warm person and very well-liked.”

‘A giant in the profession’

Baer graduated from the University of Pittsburgh in 1971 and earned his law degree from Duquesne’s School of Law in 1975. He served as a deputy attorney general for several years before entering private practice for nearly a decade.

In 1989, he successfully ran for Allegheny County Common Pleas Court. He spent most of his time in the county’s Family Law division, where his work on court reforms — including speeding up and streamlining many of its processes — and on behalf of children under its oversight as its administrative judge was widely lauded.

Baer was elected to the state’s highest court in 2003, and became chief justice last year, replacing outgoing Justice Thomas Saylor. He “took great joy” at that time in naming Saylor the Chief Justice Emeritus, and in recent months he’d been focused on preparations for Todd to succeed him, “expressing repeatedly a strong desire to ensure her success in every way,” said Duquesne University President Ken Gormley.

Throughout his career, Baer remained dedicated to Duquesne’s law school and attended ceremonies on Sept. 7 to note its renaming as the Thomas R. Kline School of Law of Duquesne University in honor of another distinguished alumnus.

“And he wrote me a beautiful handwritten note, earlier this week, saying that participating in this historic occasion that marked an exciting new era for the law school was one of the high points of his own professional career,” said Gormley, himself an attorney and constitutional scholar, who referred to Baer as both a good friend and a “true giant in the legal profession.”

“As chief justice, he shied away from the limelight but took great pleasure in celebrating the accomplishments of others. He always led by example as a caring, collaborative colleague who brought the Court together to achieve consensus whenever possible. And he presided, with pride, over the 300th anniversary of the Pennsylvania Supreme Court — the nation’s oldest court — this past May at an event held at the Constitution Center in Philadelphia,” Gormley said. 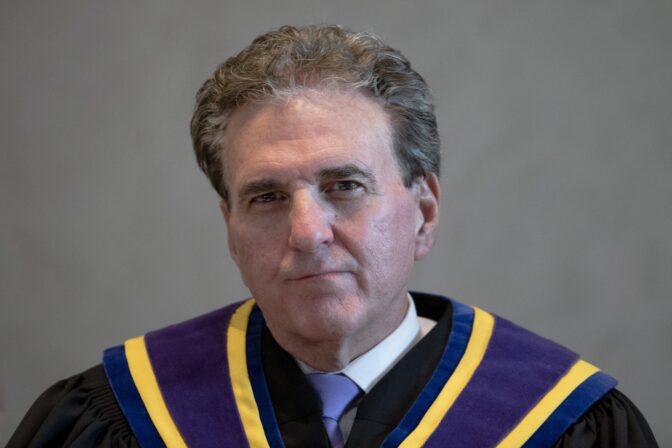 ‘He cared for children’

Allegheny Common Pleas Court President Judge Kim Berkeley Clark, a longtime Family Court judge who served twice as its administrative judge after Baer’s tenure there, said she got to know him when he was preparing to join Family Court and she was working in the county District Attorney’s office.

“There was a backlog of everything [then],” she said. “Under his administration, the juvenile court hired four dependency-hearing officers. He began this wonderful relationship with the Department of Human Services, which continues to this day.”

When Baer moved on to the Supreme Court, other administrative judges in Family Court “continued to build on the things he started,” Clark said. “And we worked on these things on a statewide basis.”

Clark said she collaborated with Baer during her tenure in juvenile and family court, and through the Pennsylvania Children’s Roundtable Initiative, a wide-ranging plan launched in 2007 to make family courts more responsive to the needs of children and families. Since then, it has focused on improving communication, efficiency and employee training within the child-dependency system, ensuring permanence, safety and well-being for children in the care of that system, and collaborating more effectively with related state agencies.

Baer’s leadership was essential to the creation and continued success of that initiative — and to its adoption in other states, Clark said.

“It takes somebody like him — a strong person,” she said. “He had a saying, ‘Gentle pressure, relentlessly applied,’ or something like that. And he wasn’t always so gentle. But that’s what we needed in Pennsylvania to make this happen, come hell or high water.”

“He cared for children who couldn’t fight for themselves, for parents who lacked resources . . . ” Clark said. “I will miss him very much.”

Gov. Tom Wolf has ordered the commonwealth flag to fly at half-staff on all Pennsylvania facilities, public buildings and grounds in recognition of Baer’s death.

“He was a respected and esteemed jurist with decades of service to our courts and our commonwealth,” Wolf said. “I am grateful for his contributions and leadership in the Supreme Court.” 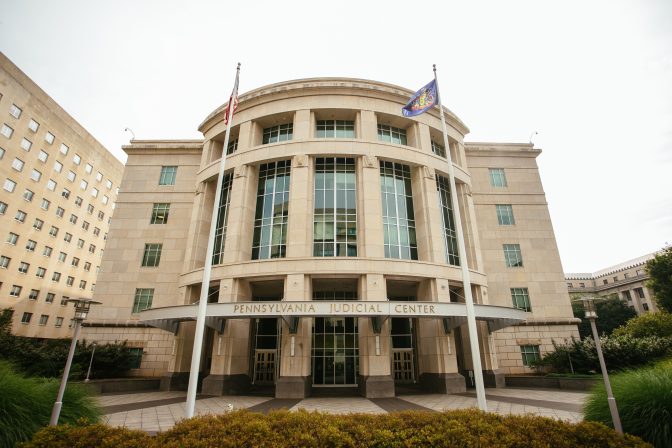 The Pennsylvania Supreme Court ruled Wednesday that it will not await a lower court decision about the future of the state’s congressional map and will instead take over the case.

Other tributes to Baer included:

Pittsburgh Mayor Ed Gainey: “Pittsburgh native Max Baer, the chief justice of the Pennsylvania Supreme Court, lived a life devoted to public service. He spent decades fighting on behalf of families on the Allegheny County Court of Common Pleas before joining the Supreme Court. Chief Justice Baer was always kind, compassionate, and caring — his death will be a loss for the entire Commonwealth. May his memory be a blessing now and always.”

State Rep. Emily Kinkead of Brighton Heights: “[I’m] deeply saddened to hear about the sudden passing of our chief justice, Max Baer. He served our Supreme Court with dignity and served the law and justice above all else. He will certainly be missed.”

State Sen. Jay Costa of Forest Hills: “I am saddened and heartbroken to learn of the passing of the Honorable Pennsylvania Supreme Court Chief Justice Max Baer, a respected leader and a true public servant. It’s been a joy to call him a friend for the past 30 years as he has served Allegheny County and the entire commonwealth of Pennsylvania. A fellow Duquesne Law School graduate and lifelong yinzer, Justice Baer leaves an accomplished legacy of moral clarity, justice, and care for our democracy. I will miss him greatly and am holding his family in my prayers today.”

State Rep. Dan Miller of Mt. Lebanon: “Justice Baer was a kind-hearted man with a great family. I enjoyed all of our conversations over the years. Mt. Lebanon lost a good neighbor, and the Supreme Court lost a committed justice. My sincere condolences to all who loved him.”

Speaker of the state House of Representatives Bryan Cutler of Lancaster: “The duties of a constitutional office are heavy and the legal issues that Chief Justice Baer decided over many years were not simple or easy. The dedication the chief justice demonstrated to his duties and in representing Pennsylvania’s judicial branch should be commended and will have a lasting impact in the future. The chief justice was an honorable man doing a difficult job.”

State House Majority Leader Kerry Benninghoff of Bellefonte: “Of note, [Baer’s] admirable work in the area of foster care, adoption and child advocacy is something that has had a monumental impact on the lives of countless Pennsylvania children and made the dream of becoming a family a reality for many. I again wish those close to him comfort and peace during this difficult time.”