Pennsylvania Lt. Gov. John Fetterman speaks to a crowd in the rain at a U.S. Senate campaign rally in Pittsburgh.

Fetterman blasted Oz’s attempts to keep his stroke this spring at the center of the intensifying campaign. 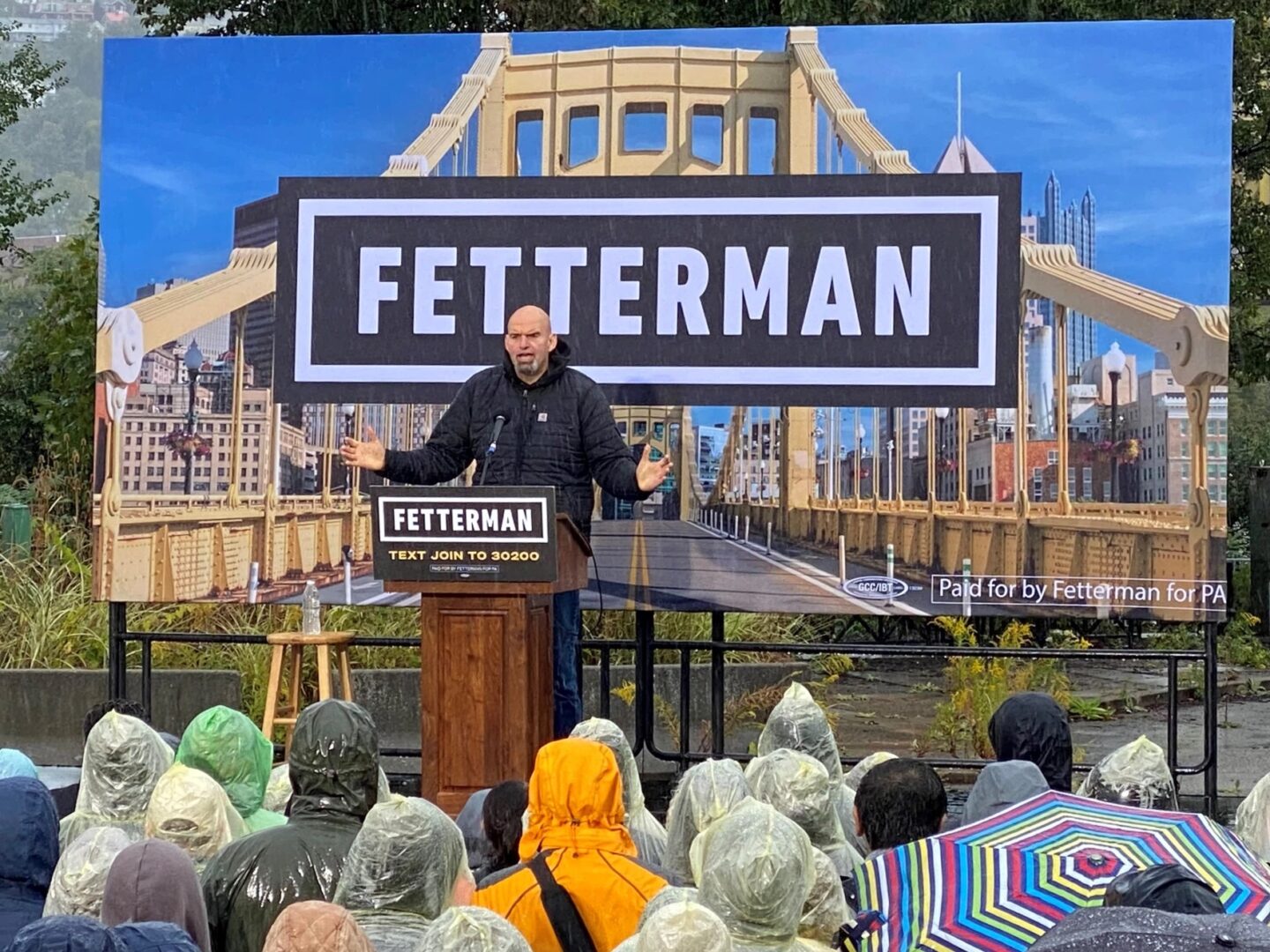 Pennsylvania Lt. Gov. John Fetterman speaks to a crowd in the rain at a U.S. Senate campaign rally in Pittsburgh.

Democratic U.S. Senate candidate John Fetterman hit just about every Pittsburgh cultural touchstone in a rally with hundreds of supporters in Pittsburgh’s Strip District Saturday. His 12-minute speech began with Fetterman taking the stage to Styx’s “Renegade” — a song closely associated with the Pittsburgh Steelers — and invoked local traditions like putting French fries on sandwiches, while trotting out familiar jokes about opponent Dr. Mehmet Oz’s home in New Jersey.

“You all know where I live, and you know where I was mayor in Braddock,” Fetterman said. Firing back against a new Oz campaign billboard in Braddock that calls Fetterman “soft on crime,” he pointed to a five-year stretch during his tenure as mayor in which no borough resident died of gun violence.

“What do you think Dr. Oz has ever done about crime in a gated mansion in New Jersey? Nothing,” he said. “I’m running on my record [on] crime.”

He blasted Oz’s attempts to keep Fetterman’s stroke this spring at the center of the intensifying campaign. Last month, Oz published his health records and challenged Fetterman to do the same. The celebrity cardiologist was joined at a press conference in Pittsburgh Friday where U.S. Senator Pat Toomey —the Republican that Fetterman and Oz are competing to replace — claimed Fetterman is using his recovery to avoid talking about his positions.

“What kind of a doctor roots for somebody that was sick to stay sick?” Fetterman asked the crowd, receiving boos in response. “What an inspiring campaign for you, Dr. Oz: Your success is measured in how many words I might miss.”

Fetterman spoke for about the same length of time he spoke during a rally in Erie, Pennsylvania nearly two months ago. His delivery Saturday showed a marked improvement, though he at times stopped sentences short. Fetterman did not take questions from the press in attendance.

Fetterman again claimed that his only lingering stroke symptoms is an occasional auditory processing issue, and a tendency to “mush two words together.” He compared the issue to a viral video of Mehmet Oz shopping during which the Republican candidate combined the names of two Pennsylvania grocery stores. 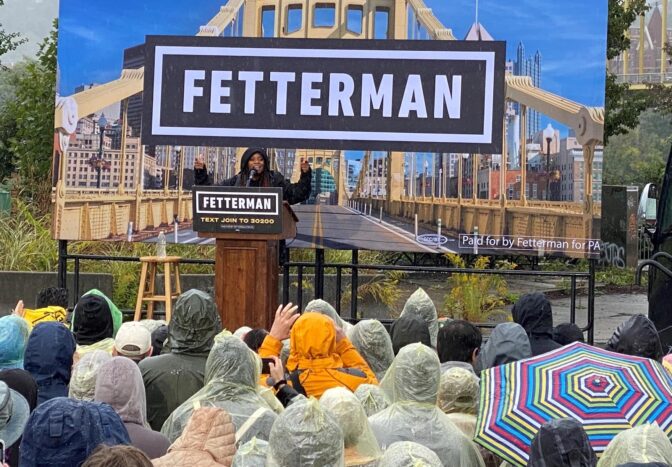 ennsylvania state Rep. Summer Lee, who is running for a Congressional seat to represent the state’s 12th District, spoke to a crowd of hundreds on behalf of the John Fetterman U.S. Senate campaign Saturday.

Khanna, who was in town ahead of a book promotion event with Pennsylvania Congressman Conor Lamb, said he supports Fetterman because of his commitment to domestic manufacturing — a position consistent with Khanna’s own vision of a “new economic patriotism.”

Lamb, who lost to Fetterman in the Democratic primary this spring, was present at the rally, but did not take the stage.

Pennsylvania state Rep. Summer Lee, who is herself running to represent Pennsylvania’s 12th Congressional District, took the stage to urge Fetterman supporters to elect Democrats like Fetterman and her in November.

Lee and Fetterman haven’t always been in lockstep. Fetterman did not support Lee’s first run for the state House, choosing to back incumbent Paul Costa instead. But Saturday, Lee stressed the need for unity among Democrats up and down the ballot.

Fetterman supporters also heard from Pittsburgh Mayor Ed Gainey who said Republicans “want to take us back to yesterday instead of creating a path of prosperity for tomorrow. They may have the money but they don’t have the power of the people.”