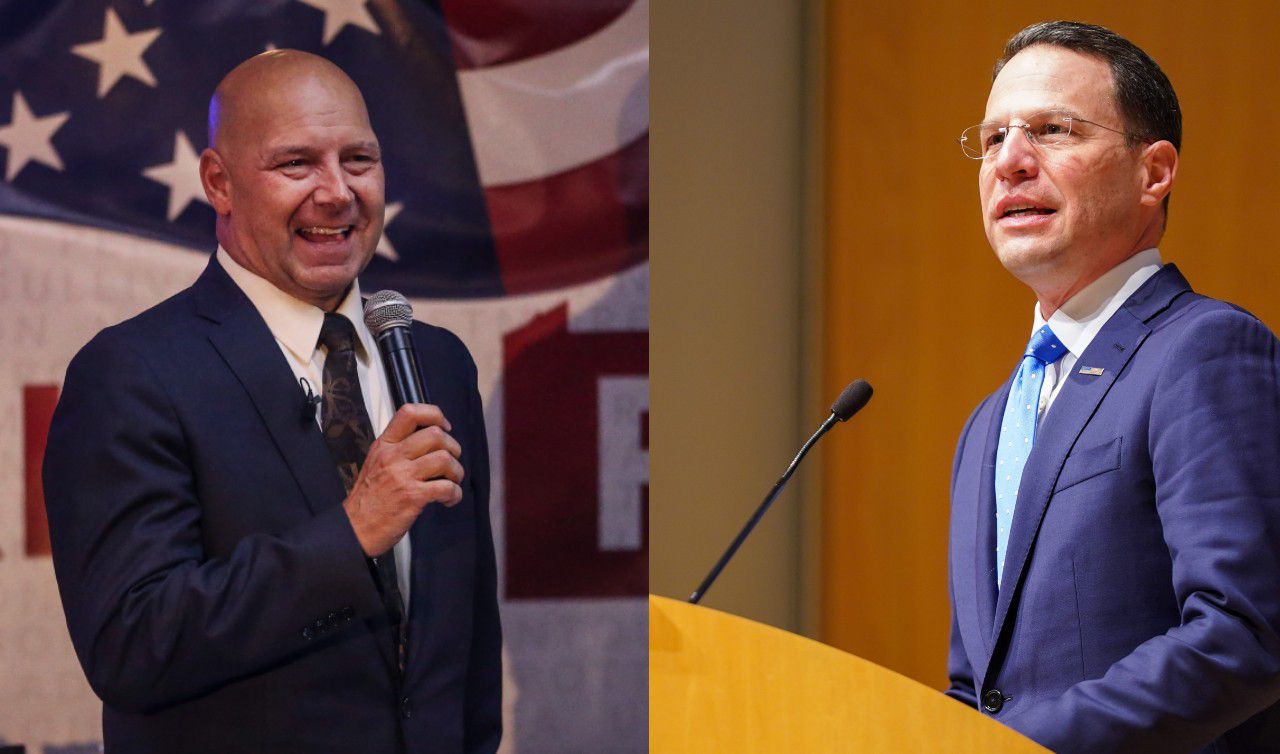 Democrat Josh Shapiro’s campaign spent a staggering $28 million on his bid for Pennsylvania governor over the past three months, eclipsing spending by Republican nominee Doug Mastriano, who has struggled to amass support from high-profile donors despite national attention on the race.

Shapiro, the state’s attorney general, raised $25.4 million between early June and late September, according to the latest campaign finance reports. Much of that total came from state and national groups that work to elect Democrats, as well as private and public unions.

His campaign spent $27.9 million during that same time period, primarily on television ads, printed campaign materials, and other media-related expenses, leaving it with just shy of $11 million in the bank as the race kicks into high gear in the final stretch before the Nov. 8 election.

And with six weeks left until voters go to the polls, Shapiro has already set a state record for a single governor’s race, with $42.7 million in campaign spending. The sum breaks the more than $40 million figure set by former Democratic Gov. Ed Rendell in the 2002 gubernatorial election.

Mastriano, a far-right state senator from Franklin County, raised $3.1 million, mostly from small donors giving $250 or less. His campaign spent less than $1 million and had $2.5 million left at mid-month.

For the first time, his campaign attracted a smattering of support from donors outside Pennsylvania, including $1 million from the billionaire owners of a Wisconsin shipping supply company and supporters of former President Donald Trump.

The large-scale donations to both candidates underscore the importance of this year’s gubernatorial election, which is being watched nationally as a referendum on nearly every major issue in American politics. The outcome will determine the future of abortion rights, ballot access, and public school funding in the state.

The geyser of money, including multiple six-figure contributions, also puts Pennsylvania’s weak campaign finance law on full display. The state places no limits on the amount of money donors can contribute to campaign committees, and candidates have great latitude when it comes to spending that cash.

Here is a closer look at the candidates’ fundraising and spending between June and September, which became publicly available this week.

Shapiro also received millions in donations from the political action committees associated with public and private unions, including $500,000 each from the two parent unions that represent state workers; $156,566 from the union representing Pennsylvania’s public school teachers and another $250,000 from the National Education Association; and $500,000 from the Laborers’ International Union of North America, based in Washington, D.C.

He also received another $500,000 from the political action committee representing trial lawyers in Pennsylvania.

Other notable donations include $500,000 each from New York billionaire Michael Bloomberg, Silicon Valley venture capitalist Reid Hoffman, and California doctor Jennifer Duda. With her latest check, Duda has given Shapiro a total of $2 million since the start of the campaign.

On top of all the big money, Shapiro received almost $4.2 million in donations from individuals who donated less than $250 — $1 million more than Mastriano raised all cycle.

The bulk of the Democrat’s nearly $29 million in spending over the past three months was on advertising and digital consulting. The spending underscores the ways Shapiro’s more traditional campaign strategy — which has included holding frequent public events and flooding the airwaves with ads — contrasts Mastriano’s decision to campaign largely to his base. The Republican has run without television ads, and blocked mainstream media from covering campaign events.

Shapiro tapped Grassroots Media LLC, the Bala Cynwyd firm founded by Mike D’Ettorre, who began his political career working on Rendell’s 2002 primary race for governor; RWT Production LLC, which has worked with the Democratic National Committee; and GPS Impact, a Democratic firm that has worked in other swing states, including Wisconsin, Michigan, and Ohio.

The campaign also spent a considerable amount of cash on salaries and benefits for a big campaign staff, which has more than doubled in size since the primary election. The campaign reported paying salaries to 34 different people — including one of Pennsylvania U.S. Sen. Bob Casey’s daughters — and stipends to several interns. Most are based in Philadelphia, though the campaign also has staff in Pittsburgh, the Philadelphia suburbs, the Harrisburg area, and a few who live in Washington, D.C., Maryland, and Kentucky.

Up until this point, Mastirano’s biggest donor had given him only a little more than $100,000 — small change in a statewide campaign — and his reports showed little institutional support from Republican powerbrokers or aligned special interest groups.

His latest filing showed a continuation of that trend.

Mastriano’s single biggest donors were Richard and Elizabeth Uihlein, supporters of former President Donald Trump and conservative megadonors from Illinois. The couple made headlines last year for their financial support of one of the groups that participated in the rally that preceded the Jan. 6 insurrection at the U.S. Capitol.

Mastriano, who also attended the rally and marched on the Capitol, was subpoenaed by Congress’s January 6th committee.

The Uihleins gave Mastriano’s campaign a combined $1 million, roughly a third of his total fundraising in the cycle.

Among the other notable absences were support from the Republican Governors Association, the partisan opposite of Shapiro’s largest donor that also can tap big money support, and a constellation of groups linked to suburban Philadelphia billionaire Jeff Yass.

Yass-backed groups spent millions during the primary against Mastriano, including the Commonwealth Leaders Fund. That PAC reported spending $4.6 million on TV and digital ads between June and September, but none of the spending appeared as an in-kind contribution to Mastriano, according to his campaign finance report.

In the primary, the fund spent millions on ads playing up chosen candidate Bill McSwain’s law enforcement credentials. But in lieu of pro-Mastriano ads, Matt Brouillette, chief executive of the fund, said its recent spending either attacked Shapiro or was spent on state legislative races.

Mastriano referenced the dearth of backing, without naming names, in a Facebook video Wednesday morning, noting that “nationwide Republican organizations … have not been forthcoming in supporting this campaign.” (By Wednesday afternoon, the video was no longer online.)

“Pennsylvanians, if you’re giving money to these national organizations, just know the money is not coming to Pennsylvania,” he said.

Most of Mastriano’s larger contributions came from business owners and executives around the state, including the general manager of an RV company in Mastriano’s home county and the owner and founder of a Cumberland County home improvement company. Each gave Mastriano $50,000.

As previous reports showed, Mastriano’s campaign is propped up by smaller donations. Nearly $420,000 of the $3.1 million he raised in the past three months were from contributions of $250 or less.

Mastriano’s campaign didn’t purchase any TV ads during the reporting period that ran from June 7 to Sept. 19, and paid no formal staff salaries. It spent some of its limited funds on signs and other physical advertising, but most of the money went to an array of conservative consultants, some from Trump’s campaign orbit and others who are political unknowns.

One of those relative unknowns is Mastriano’s campaign manager, Vishal Jetnarayan. He lives in Chambersburg, where Mastriano also lives. In a self-published book, in speaking engagements, and on a religious website he runs, Jetnarayan describes himself, and is described by others, as a prophet. He says he speaks with God directly and gives advice on how others can do so.

Mastriano’s campaign has paid Jetnarayan since February, according to campaign finance documents, and seems to give him a regular salary, even though the payments are routed through a company.

The campaign also repeatedly paid consulting fees to Grant Clarkson, an aide who was at the Jan. 6 insurrection.

A much bigger share of the campaign’s funds went to better-known figures tied to Trump.

Over the course of the most recent financial reporting period, Mastriano’s campaign paid $83,000 to ProActive Communications, a conservative media firm that previously worked for the Trump campaign. ProActive’s CEO is Mark Serrano, a pro-Trump Fox News pundit who the Washington Post reported didn’t tell the network about his financial connection to the administration.

Mastriano’s campaign paid $81,000 to C&M Transcontinental, a public affairs firm headed by Michael Glassner, who served as chief operating officer and deputy campaign manager for Donald Trump in 2016 and 2020.

The campaign also paid $37,500 to Andring Consulting, a firm run by Vonne Andring, a senior advisor to the Pennsylvania Republican Party. It also paid $20,000 in campaign consulting fees to Fabrizio, Lee & Associates, a GOP polling company that proudly notes its officers were chief pollsters for Trump’s presidential campaigns.