FILE - Doug Mastriano, the Republican gubernatorial nominee in Pennsylvania, speaks at an event at the state Capitol in Harrisburg, Pa., July 1, 2022.

Doug Mastriano has been consistent about his abortion views for years

The Republican state senator’s positions are receiving renewed scrutiny because of what he shared during a Smart Talk interview three years ago. 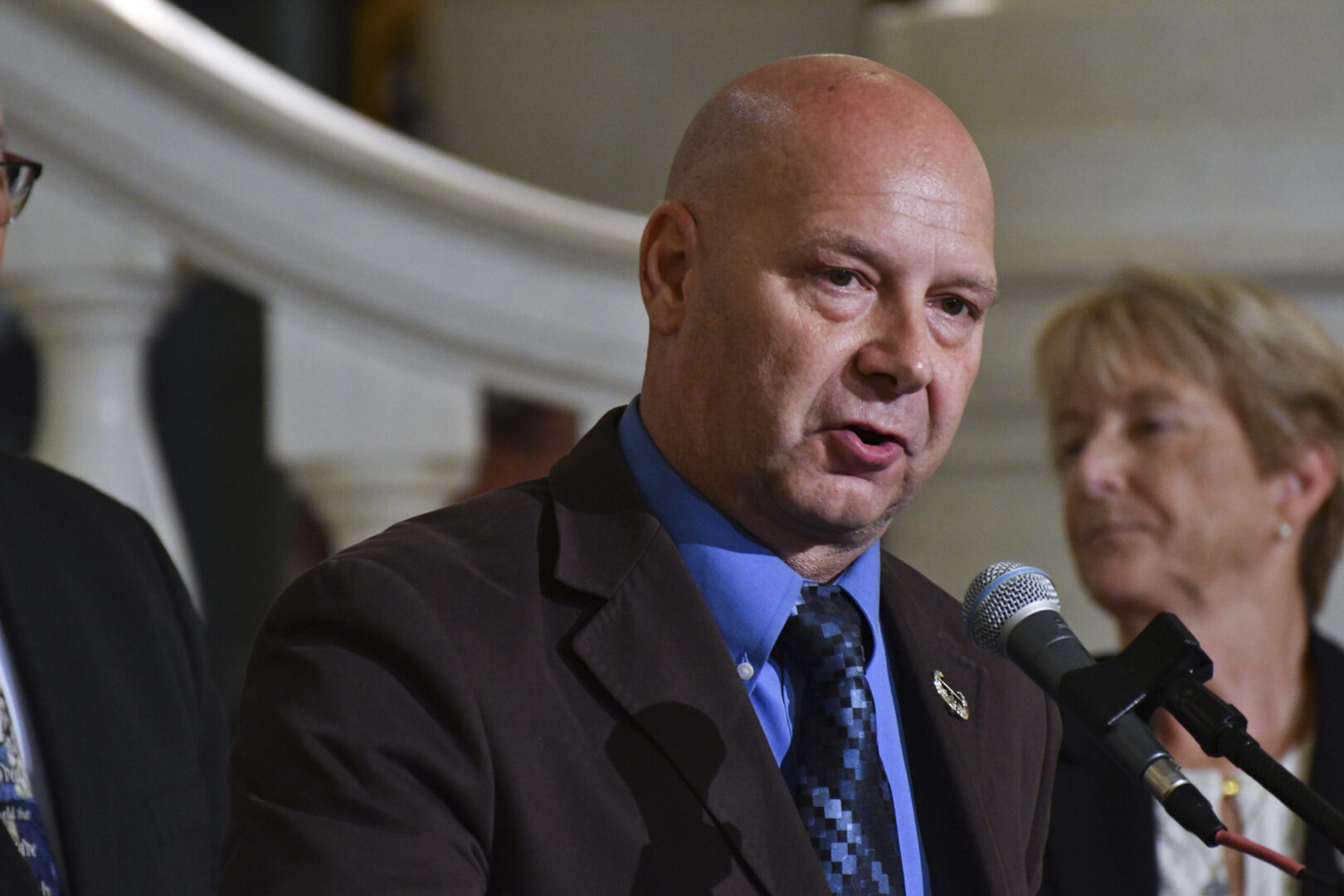 FILE - Doug Mastriano, the Republican gubernatorial nominee in Pennsylvania, speaks at an event at the state Capitol in Harrisburg, Pa., July 1, 2022.

Republican state Sen. Doug Mastriano, the GOP candidate for governor, didn’t answer Wednesday whether he still believes women should face murder charges if they obtain an abortion that is prohibited by state law.

The Franklin County lawmaker shared that view during a 2019 interview on WITF’s Smart Talk, which resurfaced in an NBC News report this week.

At the time, Mastriano was co-sponsoring a proposal that would prohibit abortions after six weeks of pregnancy. Supporters nicknamed it the “Heartbeat bill,” since the developing heart of an embryo begins beating around the sixth week.

Host Scott LaMar asked Mastriano whether women should be charged with murder if they were to violate the proposed ban, to which the senator responded “yes.” Mastriano explained he believes a fetus “deserves equal protection under the law,” and called the premise of the question a “red herring.”

“Is that a human being? Is that a little boy or girl? If it is, it deserves equal protection under the law,” he said.

Mastriano’s campaign did not respond to WITF’s question asking whether he still holds that belief. On Wednesday evening, neither his website nor his social media had addressed his 2019 position.

Though the GOP candidate for governor appears to have shied away from discussing views like that at recent public appearances, he has consistently supported restricting abortion throughout his two terms in office.

Pennsylvanians can have an abortion during the first 24 weeks of pregnancy. After that time, state law only allows for them in cases of rape, incest, or to protect a mother’s life.

As a state senator, Mastriano has backed several proposals crafted by the Republican-led state legislature to tighten that law. Gov. Tom Wolf has vetoed those ideas.

They have included a proposed ban on abortion after a fetal Down syndrome diagnosis and a prohibition on abortion services obtained through telemedicine. Most recently, Mastriano voted for a change to the state constitution that would block “the right to taxpayer-funded abortion or any other right relating to abortion” from taking root in state law. Mastriano also re-introduced a proposal for a six-week abortion ban at the beginning of last year.

During the Republican primary campaign earlier this year, Mastriano was among the candidates who made a point to assert their anti-abortion positions. But during a debate held by ABC 27 in April, he went further on the issue than several of his opponents. The state senator said he would support limiting abortion “at conception” and opposed any exceptions that are currently provided for in state law.

“I do not give way for exceptions,” Mastriano said, noting that then-Republican Senate candidate Kathy Barnette was born after her mother was raped.

Since winning the Republican nomination in mid-May, Mastriano has sometimes avoided speaking about his views. After the U.S. Supreme Court handed down its Dobbs vs. Jackson Women’s Health Organization decision, he characterized the issue as a “distraction” from other things like the economy.

“While this decision by the U.S. Supreme Court is a triumph for innocent life, it must not take our focus away from the key issues facing Pennsylvania families,” he wrote in a statement.

Mastriano has also not included his anti-abortion stances in campaign speeches this summer, regularly giving the microphone to his wife Rebbie to discuss what he calls “women’s rights” issues – which includes anti-transgender sentiment around bathroom access and school sports team participation.

Polling has shown the majority of Pennsylvanians do not support Mastriano’s views on abortion. Opinion surveys generally show around two-thirds of voters support access to the procedure with limited or no restrictions. One survey released this week showed some voters rank abortion access as a top issue – and that support for the concept has increased since the Dobbs ruling was announced this summer.

Despite those findings, the Republican state senator appeared to start vocally sharing his abortion stance again this month. When asked by WGAL reporter Tom Lehman about the issue during an interview, Mastriano called abortion access “the single most important issue of our lifetime.”

WESA reports during a call last week with the PA Pro Life Coalition, Mastriano said he and others who oppose abortion could “achieve most of our desires in protecting life” if he wins the Governor’s mansion. Though the campaign is expected to appear at a rally that group is holding in Malvern Thursday, former Republican candidate for governor Dave White is scheduled to speak in Mastriano’s stead.

“To protect the right to life, Mastriano will sign the Heartbeat bill into law, end funding to Planned Parenthood, and expand counseling for adoption services,” the platform page reads.

Sen. Mastriano (R-Frankin) is among the several dozen state lawmakers who signed a letter asking Congress to delay certifying Pennsylvania’s 2020 election result, despite no evidence that would call that result into question.