Fenicia Redman, a mother of Chester County who sued the Great Valley School District, is holding up a copy of "Gender Queer: A Memoir." 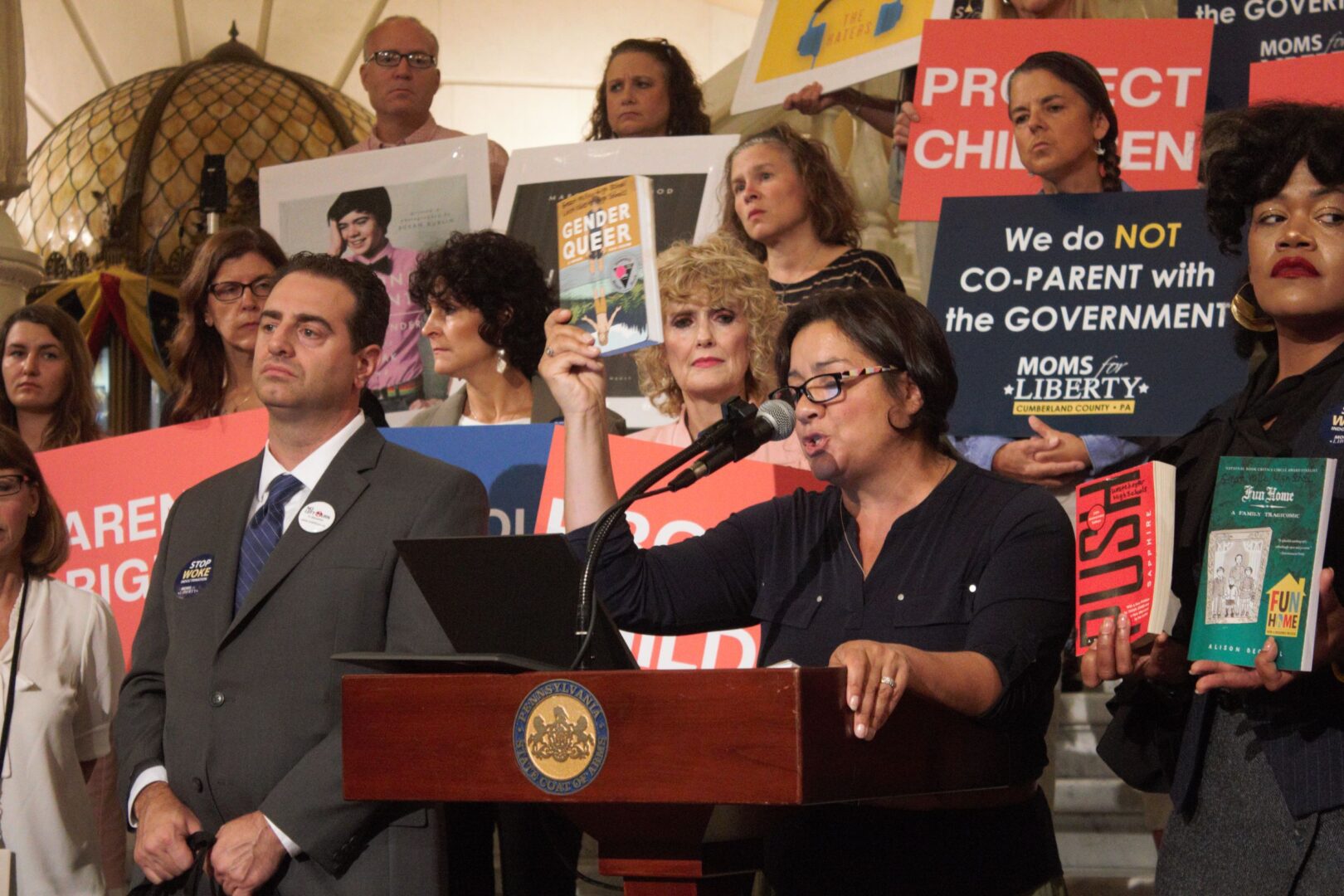 Fenicia Redman, a mother of Chester County who sued the Great Valley School District, is holding up a copy of "Gender Queer: A Memoir."

A group Republican lawmakers is  pushing for legislation to limit how public schools teach topics on gender identity and sexual orientation in classrooms.

In a rally on Tuesday, Rep. Stephanie Borowicz (R-Clinton) and other GOP lawmakers were joined by conservative groups and parents to introduce HB 2813. The so-called “Parental Bill of Rights,” would require classes at school to be “age appropriate” and prohibit topics on sexual orientation and gender identity in kindergarten up to fifth grade.

Borowicz said her bill is patterned after a Florida law dubbed by critics as the “Don’t Say Gay” law, which bans classroom teaching on gender identity and sexual orientation through third grade.

“Mine goes further.” Borowicz said. “It needs to really be protected all the way up to 12th grade.”

The Legislation also mirrors Sen. Scott Martin’s (R-Lancaster) “Empowering Families in Education” bill, which would also prohibit classroom instruction on gender and sexuality topics up to fifth grade and require schools to tell parents about any discussions related to such topics. That bill passed the Senate in June and is now awaiting consideration in the House.

Governor Tom Wolf has signaled he would veto both bills.

“Pennsylvania was founded on the basis of inclusion, and the Wolf Administration has fought to ensure that Pennsylvania will continue to be a state that welcomes and protects all of its residents,” said Rafael Álvarez Febo, executive director of the LGBTQ Affairs Commission for Wolf’s administration.

The Pennsylvania American Civil Liberties Union denounced Martin’s bill. In a statement they said  “it will limit teachers’ ability to give students the education and support they need” and that it will foster “a hostile environment that further endangers already-vulnerable young people.” 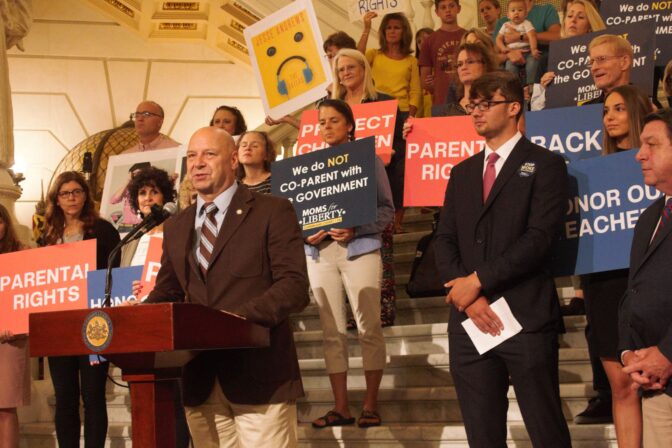 Republican Governor candidate Doug Mastriano attended a rally on Sept. 20 to introduce a bill that would prohibit discussions about gender and sexuality up to the 5th grade.

Fenicia Redman, a parent from Chester County who spoke at the Capitol rotunda, waved copies of books in the air, including “The Complete Idiot’s Guide to Tantric Sex,” which Redman said she found at the district’s school library. Redman also displayed copies of “Gender Queer: A Memoir,” and “All Boys Aren’t Blue.” Both novels are about the personal journeys of young people finding their own gender identity and sexual orientation.

In August, Redman sued school board members and the superintendent of the Great Valley School District, as well as Governor Wolf and Attorney General Josh Shapiro. The 99-page complaint includes photos of characters in graphic novels having sex. Redman accuses the district of transferring obscene materials to minors.

The district’s attorney contends that Redman’s complaint  “lacks any factual allegations or legal citations” that would support the court’s decision to remove books from the school district’s libraries, and has asked for the case to be dismissed.

Republican gubernatorial candidate Doug Mastriano was at Tuesday’s rally to express his support for the legislation. His campaign has championed a “parental bill of rights” that would give parents more say over what should be taught in schools.

Earlier in August, Borowicz and 20 other Republicans called on Secretary of Education Eric Hagarty to resign because LGBTQ-inclusive curricula and other resources were featured on the Pennsylvania Department of Education site.

“Everything from gender neutral days and classrooms, from 3rd to 12th grade to a tutorial on gender pronouns and instructions for teachers to ask before making false assumptions about someone’s gender identity,” Borowicz said, describing what was on the site.

According to the Pennsylvania Department of Education, the state does not assign books or curricula. Schools make those decisions.

“The children who attend our schools represent the diverse backgrounds and cultures of our commonwealth, and that includes Pennsylvanians with various gender identities and expressions, a spokesperson for the Pennsylvania Department of Education said in a statement. “The evidence-based equity, inclusion and belonging (EIB) resources we are providing to schools are optional supports that they can use to foster a sense of community and belonging in their school.”

Mitch Trubisky, Steelers' offense bog down in loss to Browns