Just in time for fall, national GOP leaders roll out ‘Commitment to America’ in western Pennsylvania

The event proceeded in town-hall style with attendees — including the sheriff of Fayette County — asking scripted questions about a variety of topics, including inflation, crime and fentanyl. 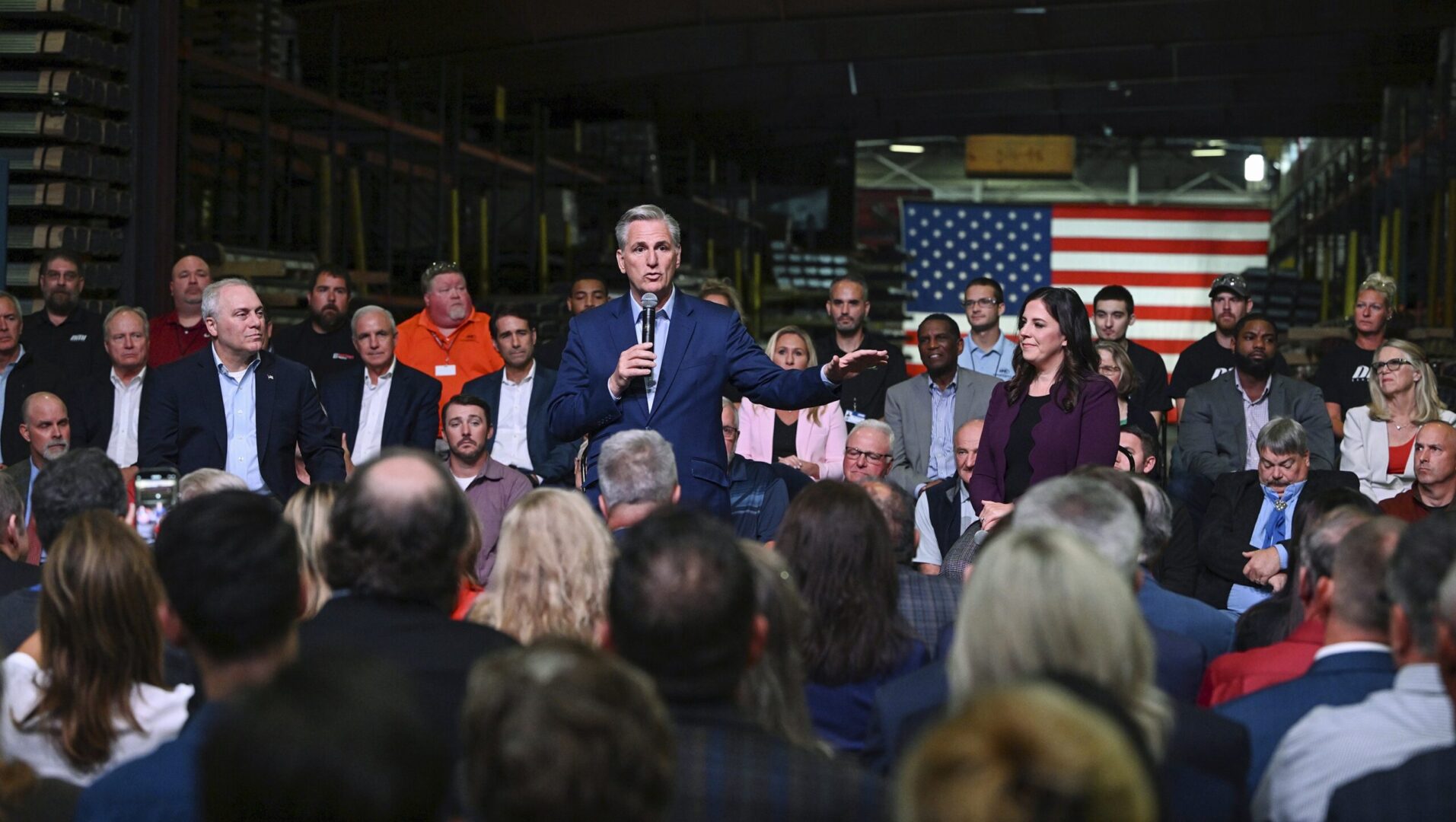 National Republicans came to the Monongahela Valley this morning for the formal rollout of what they are calling their “Commitment to America,” an election-season message that offers few policy specifics but plenty of red meat in the culture wars.

“What we’re going to roll out today is a Commitment to America in Washington,” said House Minority Leader Kevin McCarthy, in his introductory remarks. “Not Washington, D.C., but Washington County, Pennsylvania. Because it’s about you. It’s not about us.”

McCarthy continued: “[Democrats] control the House, the Senate, the White House. They control the committees, they control the agencies. It’s their plan, but they have no plan to fix all the problems they created. So you know what? We’ve created a commitment to America. Now. We’re going to talk about it today. We want an economy that is strong. That means you can fill up your tank. You can buy the groceries. You have enough money left over to go to Disneyland and save for [a] future that the paychecks grow. They no longer shrink. We have a plan for a nation that’s safe. That means your community will be protected. Your law enforcement will be respected. Your criminals will be prosecuted.”

The event was held inside a warehouse owned by Charleroi-based DMI Companies, which makes HVAC components in Pennsylvania and three other states (Virginia, California and Oklahoma). Joining McCarthy were numerous members of the GOP, including two other Republican leaders in the House — minority whip Steve Scalise and Republican Conference Chair Elise Stefanik — as well as U.S. Reps. Guy Reschenthaler and Lloyd Smucker of Pennsylvania.

Following McCarthy’s opening remarks, the event proceeded in town-hall style with attendees — including the sheriff of Fayette County — asking scripted questions about a variety of topics, including inflation, crime and fentanyl.

House members and TV folks doing their stand ups here. (We are at a facility that manufactures HVAC components in case you are wondering about the background.) pic.twitter.com/MGGM9OYuHd

The GOP plan pledges to deliver a strong economy, enhanced security, more accountable government and “a future that’s based on freedom.” The effort is strongly reminiscent of a “Contract with America” that Republican Newt Gingrich proposed in the 1994 mid-term elections. That earlier effort sought to mark a contrast with Democrats, who controlled the White House and Congress. Republicans are hoping to swing the legislative branch this fall, as Gingrich did 28 years ago.

As detailed on its website, many of the plan’s components are familiar too, such as a vague pledge to “curb wasteful government spending” and create jobs through “pro-growth tax and deregulatory policies.” The GOP also promises to invest more in policing the border.

Other provisions, though, strike a newer and more strident note, such as a pledge to “crack down” on district attorneys — who are typically elected by voters — “who refuse to prosecute crime.”

Before the formal event began, Reschenthaler told WESA: “This Commitment to America is our blueprint for moving forward. I think that the Democrats don’t have a plan … And it’s clearly not working because we’re in bad shape. So we’re going to try to get America back on track with this plan. It’s very simple. It’s an economy that’s strong. It’s a nation that’s safe. It’s a future built on freedom and a government that’s accountable. This is something we can all get behind.”

“We’ve got to stop injecting trillions of dollars in the economy, and we can stop that through what I would call wasteful government spending,” he said. “We can also reduce energy costs through just having policies that are pro-energy. We’re sitting on more natural gas in Pennsylvania than Saudi Arabia has oil.”

While the document is hazy about how to deliver on some of its goals — such as a pledge to “recover lost learning from school closures” or to “exercise peace through strength” abroad — it is often decidedly specific on some culture-war issues.

It pledges, for example, to “ensur[e] that only women can compete in women’s sports” — a rebuke of efforts by trans athletes to compete in the gender with which they identify. And there is little doubt about what its vision of government accountability consists of: The GOP notes a lack of hearings on the origins of COVID-19 and the collapse of the government in Afghanistan, and it pledges that if Republicans can take hold of Congress, they will “require the White House to answer for its incompetence at home and abroad.”

“They have ignored your priorities and showed contempt for your values. We will not allow it,” asserts another GOP  video.

But not every American is likely to see their values reflected in the pledge to “protect the lives of unborn children and their mothers” — presumably a promise to restrict abortion rights in the wake of a Supreme Court decision that denied Constitutional protection to that freedom.

Rep. Smucker of Pennsylvania, whose district includes Lancaster and southern York counties, hedged when asked if Republicans would advance national abortion restrictions. “I don’t know how that will turn out,” he said. “I’m very strongly pro-life. My community is very strongly pro-life. You know, I would support something along that line. But I don’t know that that will specifically be in this commitment.“

The proposal also speaks vaguely of the need to protect First Amendment rights, and it says the GOP will stop tech companies “from putting politics ahead of people.” That’s an apparent reference to conservative gripes with private companies that, the GOP alleges, deploy spam filters that target Republican emails and moderate user comments from conservatives more stringently.

Democrats sharply criticized the message Thursday, even before McCarthy delivered it in person. In a statement, the state Democratic Party blasted Republicans for having “now made official what we’ve known for months: if elected, they will ban abortion nationwide, drive up health care costs, and gut Pennsylvanians’ hard-earned benefits” under the Social Security and Medicare programs. 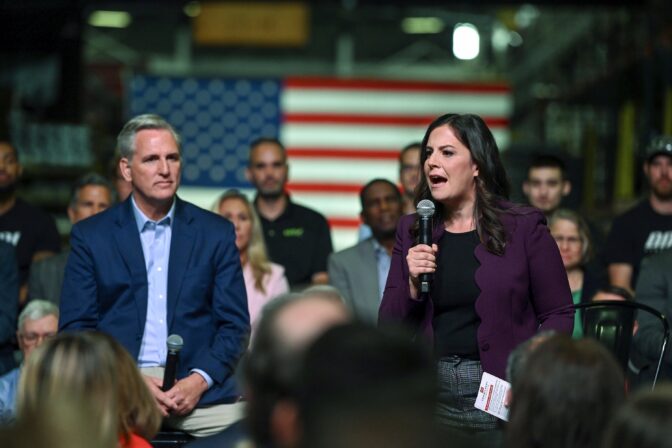 In fact, the document is silent on how it would deliver on its pledge to strengthen Social Security, though historically Republicans have favored approaches like raising the retirement age and paring back benefits for higher-income retirees.

But Smucker said that raising the Social Security retirement age is on the table. “[It’s] one of the ideas that I think we should look at [along with] ensuring that those who really need it are the ones who are going to be able to continue to benefit from Social Security.”

When asked if he meant instituting a means test, Smucker confirmed: “Yeah, yeah. Like a means test.“

Republicans are also on record as opposing Democrats’ efforts to allow Medicare to negotiate with pharmaceutical manufacturers for lower drug prices — a long-sought power delivered in the Inflation Reduction Act this summer. The “Commitment to America” appears to refer to that power only as a “drug takeover scheme,” but asserts that it could mean 135 fewer drugs on the market — an estimate apparently based on a 2021 University of Chicago study concerning a different version of the plan.

In any case, Democrats seem loath to let Republicans have Western Pennsylvania’s stage to themselves. U.S. Rep. Steny Hoyer of Maryland, the second-highest-ranking Democrat in the House, fleshed out a Democratic vision of the years ahead at an appearance Friday morning in Downtown Pittsburgh — 25 miles and a world away from the GOP.