Thousands gather in Harrisburg for Pa. ‘March for Life 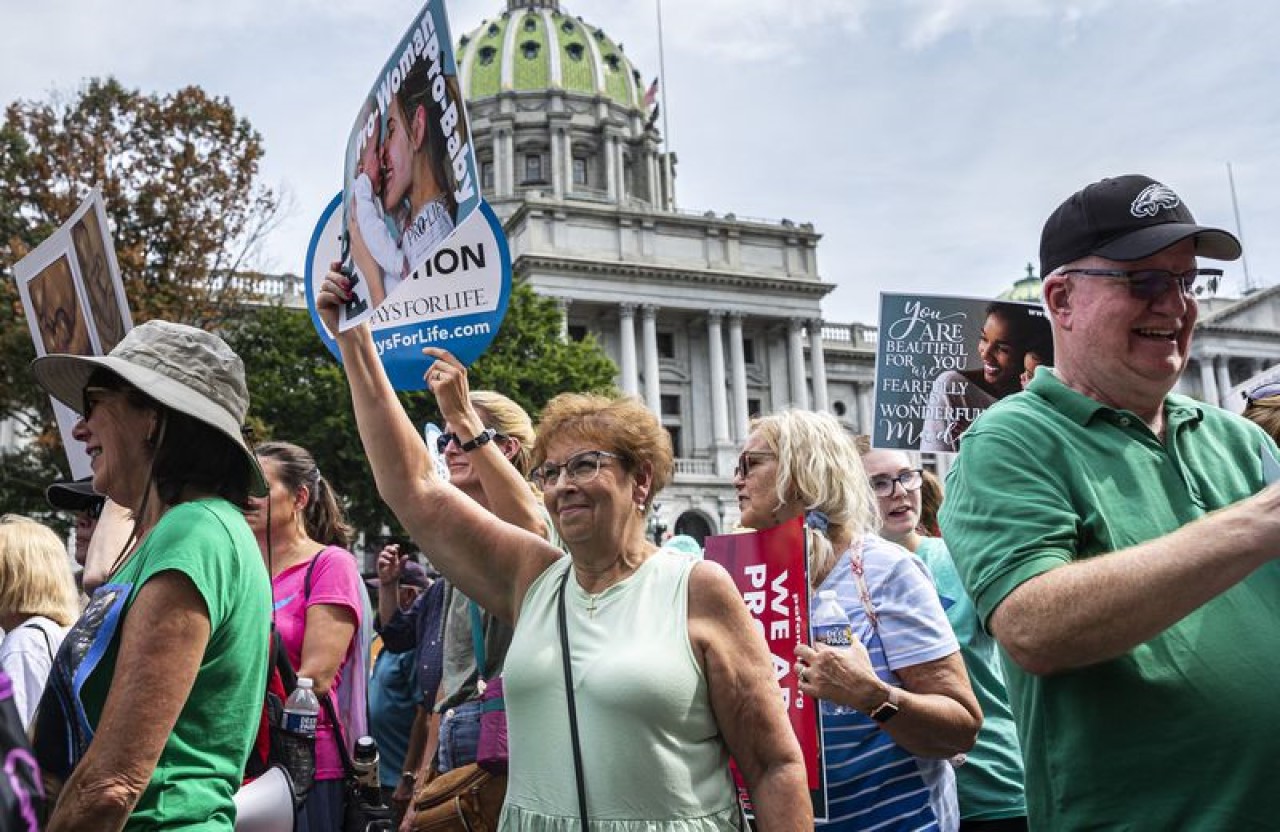 In the first post-Roe v. Wade March for Life rally in the country thousands of anti-abortion advocates spilled across the steps of the state Capitol on Monday to celebrate the overturning of federal abortion rights in the country and to call on stricter laws and even a ban at the state level.

Three months after the U.S. Supreme Court put to rest the perennial legal debate over federal abortion rights, participants in the March for Life rally in Pennsylvania seized the impending midterm election, which is less than eight weeks away, to call on state lawmakers to broaden the laws banning abortion. Many called for an all-out ban. 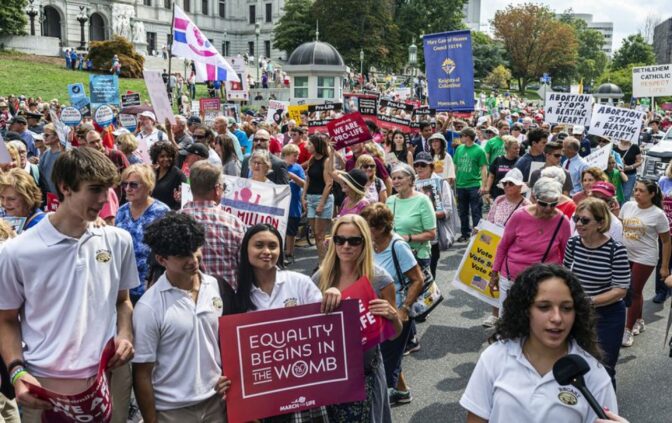 Keely Burke, a 27-year-old Quakertown mom who had her first baby six months ago, said she would love to see Pennsylvania join the ranks of states that have passed all-out bans on abortion.

“That will be a great day that day babies are fully protected just like we are,” Burke said. “This is definitely a single issue thing for me. I will only look at people who are prolife and that’s who I will vote for and if they don’t, they will not be getting my vote.”

That seemed to be a prominent sentiment on Monday among the sea of participants who were holding up signs and posters proclaiming their anti-abortion views. The state Department of General Services estimated the crowd size to be somewhere between, 5,000 and 5,500.

Many of the attendees belonged to church groups, in particular, Catholic parishes across the state. Many of the speeches were infused with references to Jesus; several people carried large crucifixes with them.

Holding up a sign that read Equality Begins in the Womb, Chelsea Wenhold advocated that unwanted babies be put up for adoption.

“There’s lots of families who want babies who can’t have their own kids,” said the 31-year-old Quakertown mom.

Abortion, Wenhold said, was the singular issue driving her vote.

Led by a cadre of anti-abortion activists and several state lawmakers, speaker after speaker acknowledged the game-changing impact that the so-called Dobbs decision by the high court has had, in striking down the long-standing precedent and delegating to states the task of figuring out abortion laws in their jurisdictions.

Addressing the crowd spread under a hot September sun, House Speaker Bryan Cutler, R-Lancaster County, thanked everyone for their advocacy and prayers in helping to defeat Roe.

“I told you last year I felt changes were coming in our commonwealth,” he said. “I don’t know that any of us anticipated how big a change that was.”

Cutler excoriated the media for portraying the anti-abortion movement as out of touch or behind the times. He encouraged the crowd to continue to fight for stricter laws.

“We cannot take our momentum for granted,” he said. “This is not a time to let up. In the next several months the men and women in this stage and those in Washington will likely find ourselves in some of the most important pro-life debates and votes that we will ever likely have the opportunity to make. We cannot make these votes without your support, your voices, your prayers. Your energy is crucial to keeping that momentum on our side.”

Since the Supreme Court struck down Roe v. Wade 22 states legislatures have moved to further restrict abortion access. The Republican-led General Assembly in Pennsylvania in July passed a proposed constitutional amendment that seeks to ensure there is no guarantee to abortion rights nor the public funding of abortions in Pennsylvania. That proposed constitutional change must pass the General Assembly in the next legislative session that begins in January before going to the voters for ratification.

The future of abortion rights in Pennsylvania will undoubtedly depend on who is elected governor in November. Democratic nominee Josh Shapiro broadly supports abortion rights. His opponent, Republican nominee Doug Mastriano has long been an opponent of abortion rights. One of his first bills – the heartbeat bill widely considered one of the more extreme abortion bills introduced by any member – called on an effective ban on the procedure.

On Monday, a poster that read “pro life” in tow, Amy Graf of York said she was disappointed in Mastriano for not being more outspoken about his views on abortion on the campaign trail.

“I’m kind of disappointed not just in Doug but in any of our legislators who don’t take a stand,” said Graf who has been to about three other March for Life rallies in Washington, D.C., and calls herself a life-long abortion opponent.

“I feel disappointed that it’s not part of his platform,” she said. “Yes, he says he’s pro-life but why not make that something you want to take a stand on? I think there are a number of people who would get more enthusiastic about him if he would make a statement…talk about it a little it.”

Moments after Graf delivered her sharp assessment of the GOP’s two top candidates, Doug Mastriano, flanked by a security detail, made his way down the steps of the Capitol and mingled with the crowd.

Mastriano did not respond to questions from the media.

He posed for photos with several people, including several priests.

“I think it would be great if we could get to a total ban on abortion and back to the days when Gov. Casey was here and Pennsylvania was a very pro-life state. I would like for us to just be stronger about our feelings here. It is the unspoken majority. We are just too quiet about it.”

In fact, poll after poll shows that a majority of Americans and Pennsylvanians support abortion rights and do not want to see a complete ban.

Mark Evans of Williamsport said he would like to see the Legislature put it to a vote for people to decide whether abortion should be legal in Pennsylvania or not.

“That’s what post-Roe has given us,” Evans said. “Each state can decide its own choice. Pennsylvania should take a stand and let the people of Pennsylvania decide. People who like the decision can stay and the people that don’t like the decision can leave. You know abortion is always going to be readily available in New York State. You can drive up there or move there.”

He and wife Danita stood on the Capitol steps along with their four daughters and a son seated nearby. Danita Evans said, “My hope in this post-Roe era is that we change our focus from murdering humans which are a gift to caring for the woman who has that human, making sure that she is safe and she feels loved and supported.”

Lancaster resident Candace Null said she would like to see Pennsylvania pass a law that resembles the one recently signed into law in West Virginia. It prohibits abortion except in cases of non-medically viable fetuses, ectopic pregnancies and medical emergencies, as well as rape and incest up to eight weeks of pregnancy if they report it to law enforcement and up to 14 weeks if the victim is younger than 18.

Right now, abortion is legal up until 24 weeks of pregnancy, with some restrictions like state-mandated counseling and a waiting period.

While thousands of anti-abortion supporters were gathered outside the Capitol, a group of House Democratic lawmakers held a news conference inside the Capitol to announce the introduction a package of four bills that would protect the licenses of abortion care providers, protect those seeking an abortion from prosecution, and expand the number of health care providers who may provide an abortion.

“When this activist Supreme Court overturned Roe v. Wade, nearly 50 years of established protections for our reproductive freedoms were erased. Right now, abortion remains legal in Pennsylvania, and my fellow pro-choice legislators and I are taking every action we can to keep it that way,” said Rep. Danielle Friel Otten, D-Chester County. “Lawmakers have no right to interfere with deeply personal issues like family planning and bodily autonomy.”

With a push in the U.S. Senate to pass a national ban on abortion, Rep. Jessica Benham, D-Allegheny County, said, “it’s vital that we do everything in our power to protect abortion access at the state level – now more than ever. With this new package of legislation, we’re fighting to reinforce access to lifesaving health care and to keep the government out of every Pennsylvanian’s health care decisions.”