So you haven’t caught COVID yet. Does that mean you’re a superdodger? 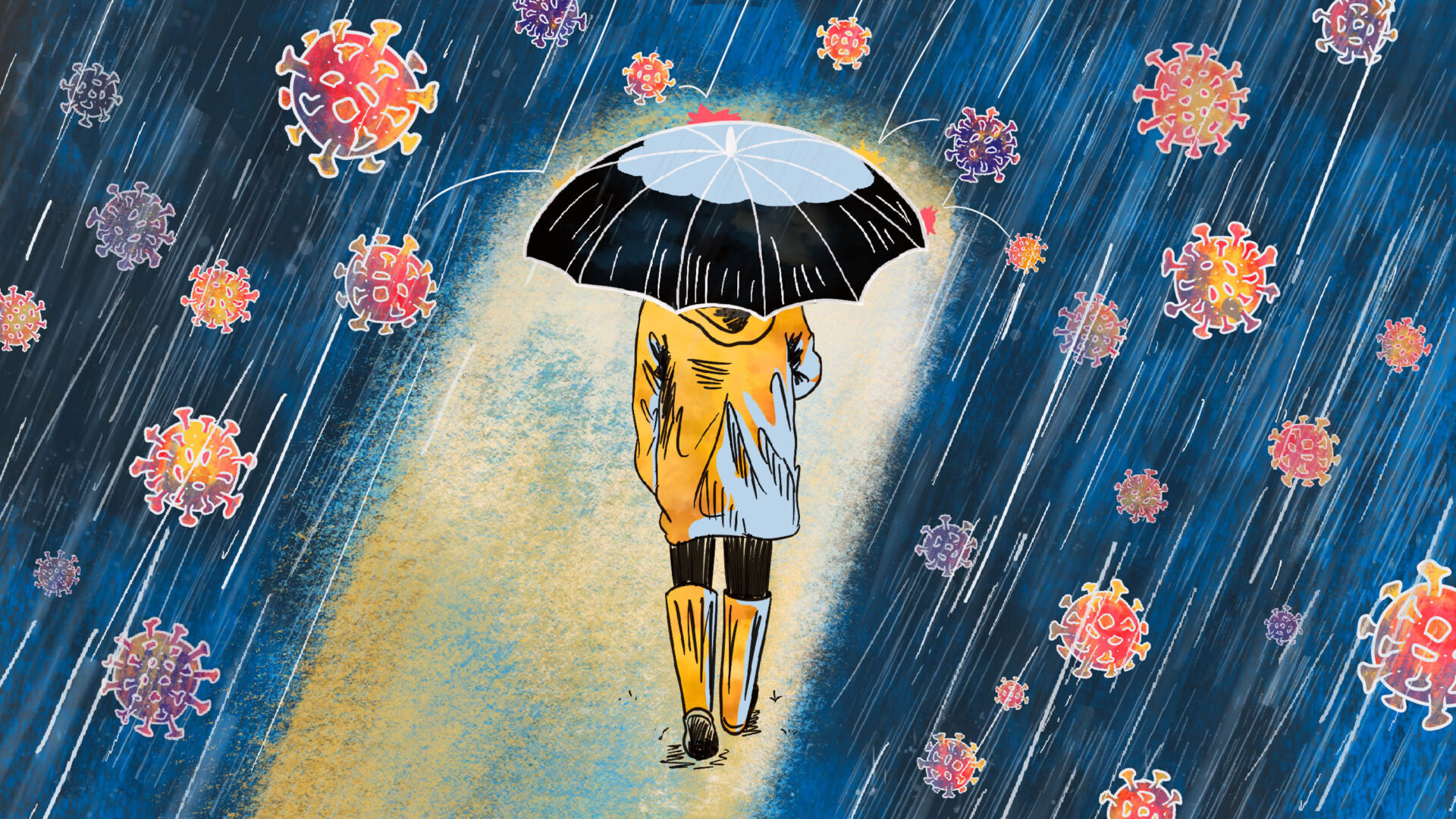 Back in the early 1990s, Nathaniel Landau was a young virologist just starting his career in HIV research. But he and his colleagues were already on the verge of a landmark breakthrough. Several labs around the world were hot on his team’s tail.

“We were sleeping in the lab, just to keep the work going day and night because there were many labs all racing against each other,” Landau says. “Of course, we wanted to be the first to do it. We were totally stressed out. ”

Other scientists had identified groups of people who appeared to be completely resistant to HIV. “People who knew they had been exposed to HIV multiple times, mainly through unprotected sex, yet they clearly were not infected,” Landau explains.

And so the race was on to figure out why: “Are these people just lucky or did they really have a mutation in their genes that was protecting them from infection?'” he says.

Now 25 years later, scientists all over the world are trying to answer the same question but about a different virus: SARS-CoV-2. 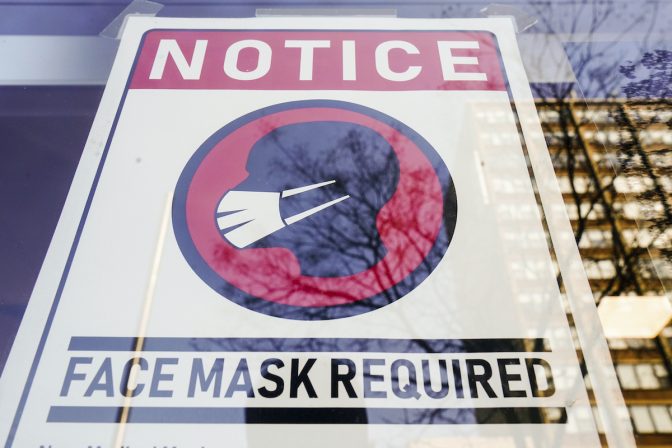 FILE – A sign requiring masks as a precaution against the spread of the coronavirus is posted on a store front in Philadelphia, on Feb. 16, 2022. The Biden administration will significantly loosen federal mask-wearing guidelines to protect against COVID-19 transmission on Friday, according to two people familiar with the matter.

By this point in the pandemic, most Americans have had at least one bout of COVID. For children under age 18, more than 80% of them have been infected, the Centers for Disease Control and Prevention estimates.

But just as with HIV, some people have been exposed multiple times but never had symptoms and never tested positive.

“We’ve heard countless anecdotes about nurses and health-care workers being exposed without any protection and remaining negative over and over again,” says pediatrician Jean-Laurent Casanova, who studies the genetics of viral resistance at Rockefeller University. “Or people share a household with someone who’s been coughing for a couple of weeks, and one person stays negative.”

So why haven’t these people caught COVID?

After two years of hunting, a team at the University of California, San Francisco has come pretty close to answering the question.

“These findings are like hot off the presses,” says immunogeneticist Jill Hollenbach, who led this research. “We haven’t published them yet. It’s all stuff that’s been happening this summer.”

Hollenbach and her team have found a genetic mutation that doesn’t prevent the virus from infecting cells – that’s what Landau was searching for in his HIV research – but still does something remarkable: It prevents a person from having COVID symptoms.

Turns out, stopping an infection altogether is an extremely tough nut for our bodies to crack.

What does it take to be a true superdodger?

Over the course of human history, scientists have identified only two instances of true virus superdodgers. That is, where a specific mutation in their genes makes people completely resistant to a virus. So that it slides off their cells, “like water sliding off a glass window,” as Casanova puts it..

In 2003, a team in London showed how some people never get a stomach bug, called norovirus, which causes vomiting and diarrhea. The researchers found that one mutation in their genes prevents them from making a molecule the virus needs to infect the cell.

(In 1995, researchers in France figured out why some people appeared to never be infected with a species of malaria known as Plasmodium vivax. However, over the past decade, further studies have clarified that these superdodgers actually do become infected with the parasite; they simply don’t show symptoms.)

The best-known superdodgers in human history

By far, the most famous virus superdodgers are people protected against HIV — the ones Landau and his colleagues were studying back in the early 1990s.

In 1996, his team was getting really close to solving that puzzle. One morning they found a huge clue. The night before, they had set up an experiment to test which molecules HIV needed to infect a human cell. The experiment garnered spectacular results.

It showed that HIV didn’t enter cells the way scientists had believed. Instead it needed a little bit of extra help. Specifically, HIV needs a specific molecule, called CCR5, on the surface of the cell to “open the door” and let the virus enter, Landau says. Without CCR5, the virus only sticks to the cell’s surface but can’t enter. “It’s kind of like the virus is knocking at the door, but nobody’s opening the door. The door is locked,” he says.

“That was what we call a eureka moment,” Landau says. “That was the moment where we could say, ‘We found something that had never been seen before.’ ”

Landau and his colleagues rushed to the computer and wrote up the findings as quickly as possible. Then he literally ran to the FedEx store to submit the paper to the journal Nature, knowing that other teams were likely to have the same finding soon.

“In those days you couldn’t just submit your paper through your computer,” he says. “You had to mail a hard copy of it to the journal. And my job was to sprint over to the FedEx store so we could get the paper mailed on time.”

Then only a few short weeks later, Landau and his colleagues made another huge discovery, and in the process solved the final piece of the HIV puzzle. “We were quite amazed that it all happened so quickly,” Landau says.

In collaboration with a research group down the hall, Landau and his colleagues sequenced the CCR5 gene in two people completely resistant to HIV. Lo and behold! Both people had the same mutation in the gene – and it’s a powerful mutation. It completely cripples the molecule so that it doesn’t appear on the cells’ surface, the group reported in the journal Cell. Remember, without CCR5, HIV can’t infect the cell.

“You can put as many virus particles as you want onto those cells, and they will not get infected,” he says. “So in the case of resistance to HIV, the story was very clear.”

The finding completely shifted the field of HIV. It led to the first – and only – way to cure a person of HIV and suggested a new route, using gene editing with CRISPR. But it did something else: It showed scientists that one mutation could make a person completely resistant to an infection. One mutation in their genes could make them a true superdodger. 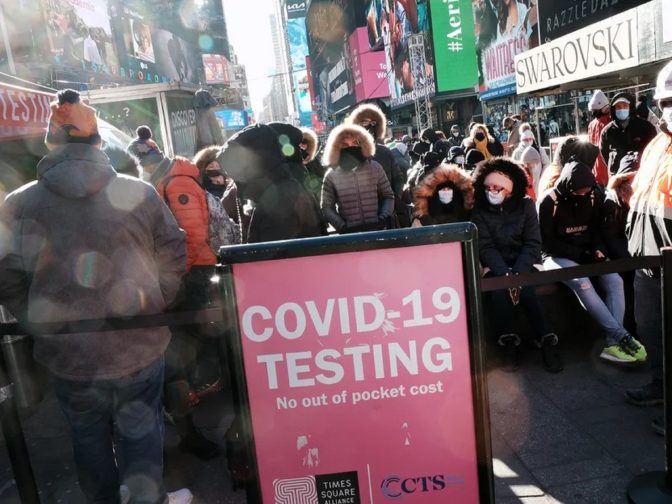 People wait in long lines in Times Square to get tested for COVID-19 on Monday. New York City, which was initially overwhelmed by the pandemic, has once again seen case numbers surge as the new omicron variant becomes dominant.

Trying to find out if there really are COVID superdodgers

“So when SARS-CoV-2 came along, of course, many labs looked to see if the same might be true for this virus,” Landau says. And inspired by the story of CCR5, they went looking for mutations in the genes required for SARS-CoV-2 to enter and infect cells.

For COVID superdodgers, the situation appears to be more complex than for people resistant to HIV, Landau says, because the way SARS-CoV-2 infects cells is different from that of HIV.

Instead of using CCR5 to “open the cell’s door,” SARS-CoV-2 uses the ACE2 receptor. People can’t live without ACE2. “The receptor regulates your blood pressure,” Landau explains. So, unlike CCR5, you can’t simply knock out the ACE2 receptor, he says. “You’re not going to have many people walking around that don’t have ACE2.

“Of course, there may be more subtle mutations in ACE2 which could play a role in resistance to SARS-CoV-2,” he adds. “But there doesn’t seem to be an obvious and dramatic mutation as is the case for HIV.”

So having one of these mutations would make you a sort of COVID mini-dodger, if you will. There are other ways to resist an infection besides denying the virus entrance into the cell, Landau explains. And they likely involve your body’s immune system.

That’s exactly what the team at UCSF has found.

Since the pandemic begin, Jill Hollenbach and her colleagues at UCSF have been studying people who test positive COVID but show no symptoms. “Not even a sniffle or a scratchy throat,” she says. “So they are entirely asymptomatic.”

After analyzing DNA from more than 1,400 people, they identified a mutation that helps a person clear out a SARS-CoV-2 so fast that their body doesn’t have a chance to develop symptoms.

The mutation occurs in a gene called HLA, which is critical during the earliest stages of infection. Hollenbach and her colleagues found that having a particular mutation in that gene increases a person’s chance of being asymptomatic by almost 10 times. They reported those preliminary findings online last September.

Since then, they’ve gone on to show how this mutation works. And it has to do with your immune system preparing for SARS-CoV-2 before the pandemic even began back in 2019.

When a virus first enters cells, HLA signals to the immune system that cells are invaded and need help. That signal triggers a cascade of events that ultimately leads your body to make potent weapons specifically designed to fight SARS-CoV-2. These weapons include antibodies and T cells that uniquely recognize pieces of this virus. Once these targeted weapons are available, your immune system has a much easier time clearing up the infection. But these weapons take time to manufacture. And that delay allows the infection to spread and symptoms to develop.

But what if, for some lucky reason, your immune system already had weapons specifically targeted to SARS-CoV-2?

This summer, Hollenbach and her colleagues demonstrated that, with a specific mutation in HLA, some people have T cells that are already pre-programmed to recognize and fight off SARS-CoV-2. So there’s no delay in generating COVID-specfic weaponry. It’s already there.

“Your immune response and these T cells fire up much more quickly [than in a person without the HLA mutation],” Hollenbach says. “So for lack of a better term, you basically nuke the infection before you even start to have symptoms.”

But here’s the kicker. For the HLA mutation to work (and for you to have these pre-armed T cells), you first had to have been infected with another coronavirus.

“Most of us have been exposed to some common cold coronavirus at some point in life,” she explains. And we all generate T cells to fight off these colds. But if you also have this mutation in your HLA, Hollenbach says, then just by mere luck, these T cells you make can also fight off SARS-CoV-2.

“It’s definitely luck,” she says. “But, you know, this mutation is quite common. We estimate that maybe 1 in 10 people have it. And in people who are asymptomatic, that rises to 1 in 5.”

While Hollenbach and her team continue to look for more mini-dodger genes, Casanova over at Rockefeller University and his colleagues are still trying to determine if there are true superdodger genes. And he’s looking for participants right now for his study.

“You fill out a questionnaire online about your exposures to SARS-CoV-2,” he says. And then if you meet the criteria of a superdodger, the team sends you a testing kit. Basically you spit in a cup and mail it back to Casanova and his collaborators.

“We’ll extract your DNA and sequence your genome,” he explains. “We hope that in a group of 2,000 to 4,000 people, some people will have genetic mutations that tell us why they’re resistant to infection.”

And perhaps, like with HIV, that finding will one day shift the field of COVID research and lead to a vaccine that does what everyone wishes our current vaccines would do: turn everyone into a COVID superdodger.