''Radiant Baby,'' by Keith Haring, painted on the wall of his childhood bedroom.

Keith Haring’s Radiant Boy to be auctioned off 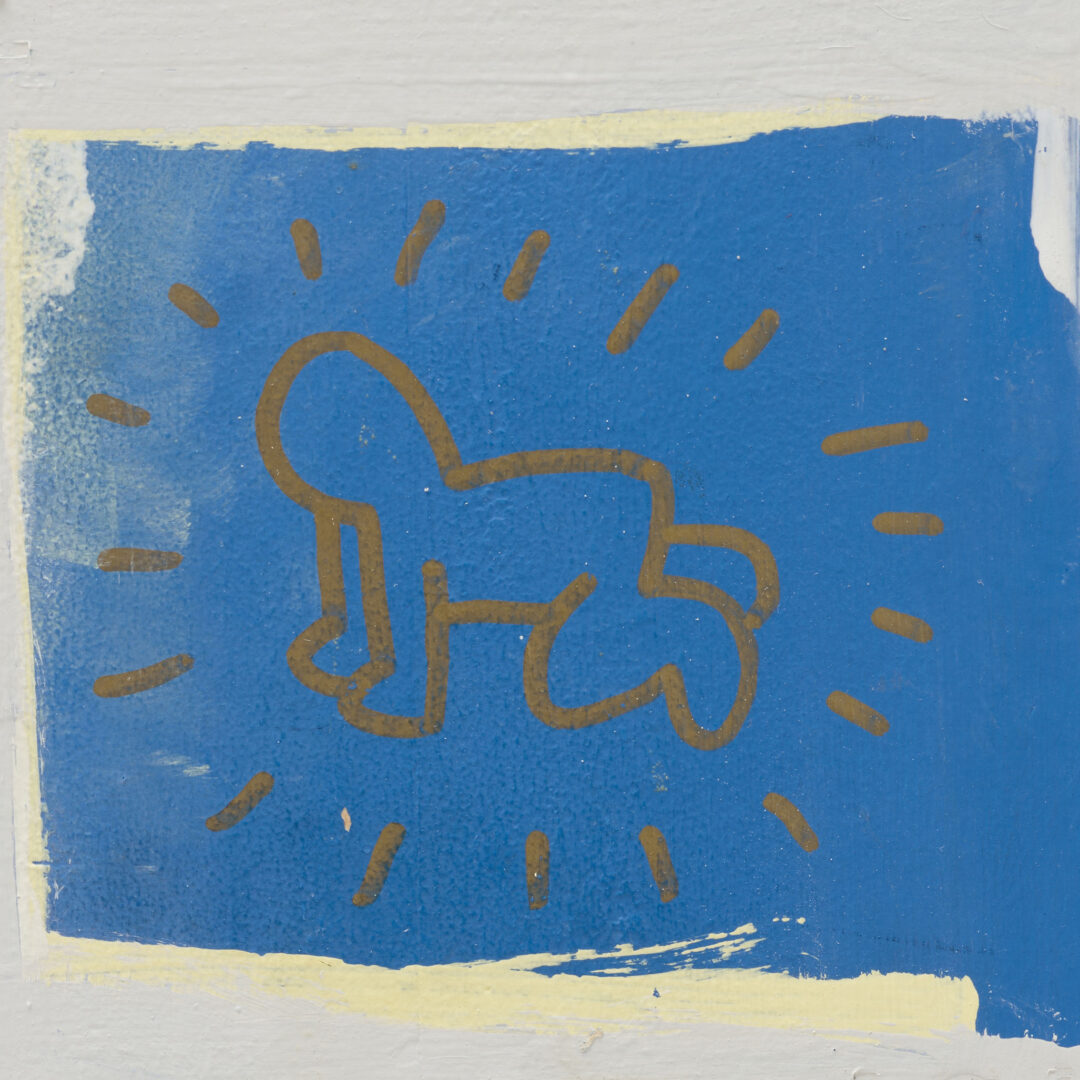 ''Radiant Baby,'' by Keith Haring, painted on the wall of his childhood bedroom.

Eighteen years ago, Angela and Scott Garner were a recently married couple looking to settle down in a nice house in the country. They were riding their bicycles through Kutztown, Pa., and stopped at a particularly charming Victorian on Whiteoak Street.

“I was admiring it and I saw a lady in the backyard with a laundry basket. We rode around to the front and, by our luck, there was a for sale sign outside,” said Angela. “My husband was like, ‘We can’t afford that house.’” 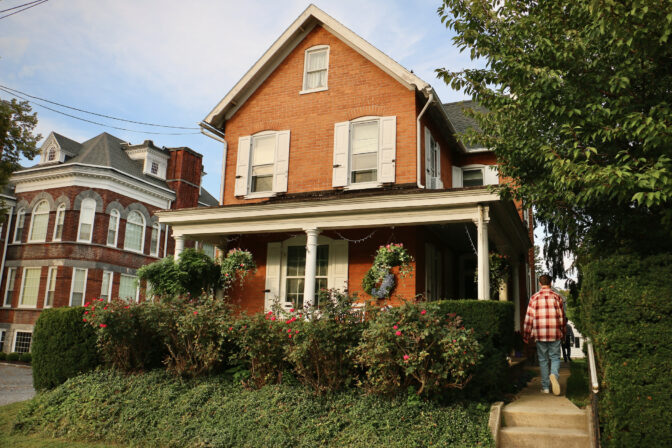 The Kutztown home where Keith Haring grew up is now occupied by Scott and Angela Garner and their teenage son. (Emma Lee/WHYY)

“It’s a large house with maybe a lot of repairs needed in the future,” recalled Scott.

The Garners are not particularly wealthy people — she is a social worker for a local health care provider, he is a limousine driver — but the house won them over, particularly when the woman with the laundry basket told them the artist Keith Haring grew up there.

“We said, ‘Yeah, we heard that he grew up in Kutztown.’ She looked at us and said, ‘No, I mean he grew up in this house,’” said Angela. “I always thought it would be neat to have a fixer-upper that had a neat story to it.”

The house has lived up to its promises. It is indeed a fixer-upper (“It’ll absorb any amount of attention and dollars you want to put into it,” said Scott) and it’s neat: the house is a mecca for Keith Haring fans. It’s not unusual for the Garners to find strangers in their driveway or on their porch, hoping to get a picture or a peek in a window.

“We had a pizza delivery boy come to the door, and as he’s handing me the pizza I noticed he had a Keith Haring tattoo on his arm,” said Angela. “He said, ‘I can’t believe I’m delivering to the Haring house.’” 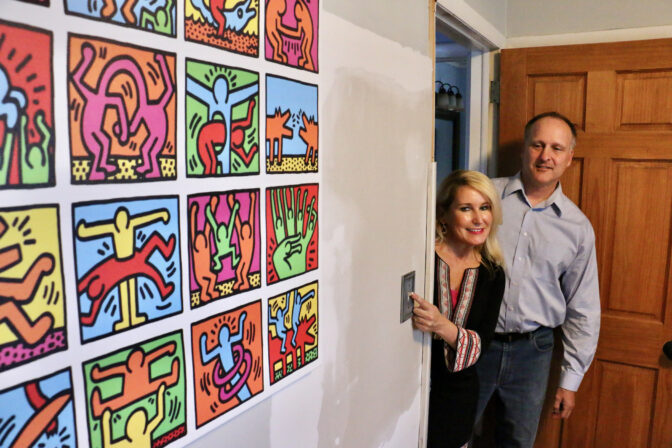 Angela and Scott Garner look into the bedroom where artist Keith Haring painted a ”Radiant Baby” just above the light switch. After living with the painting for nearly 20 years, the Garners had it cut out of the wall and plan to sell it at auction. (Emma Lee/WHYY)

For nearly 20 years, the Garners have been good sports about the attention, graciously allowing pictures and sometimes inviting people inside to see the treasure in the back room.

After leaving Kutztown, Haring studied art in Pittsburgh and then made his way to New York, where his street art became a sensation. His signature style are line drawings of figures dancing, their movements suggested by jiggling lines, and the Radiant Baby, a crawling baby figure with lines radiating outward.

As he was becoming one of the most internationally recognized artists of the 1980s, he would often come back to Kutztown to visit his parents. During one stay, it’s not clear exactly when, he drew a Radiant Baby in gold ink next to the bedroom door, above the light switch. 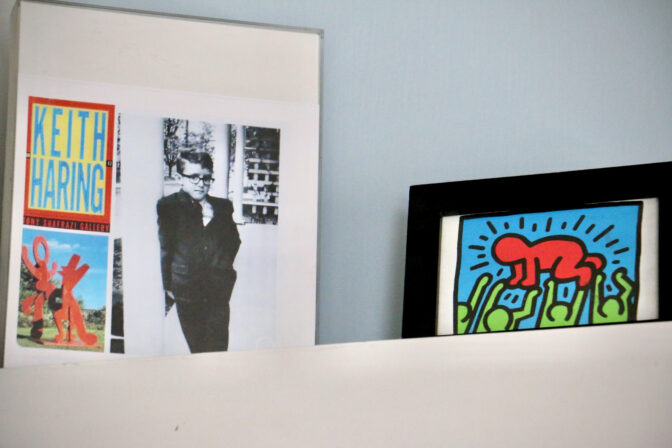 A photo of young Keith Haring on the front porch sits beside a framed image of a ”Radiant Baby” in the living room of the Garners’ Kutztown home. (Emma Lee/WHYY)

At the height of his prominence, Haring fell victim to the AIDS epidemic of the time. He died in 1990 at age 31.

The little doodle in his old bedroom became a hidden art world secret.

“Over the years, once in a while we’d contact maybe a museum or a collector in Japan, or write to a university in Oklahoma. And there just wasn’t any response,” said Scott. “So you’re busy with life, you’re raising a family, and you just don’t get around to it again.”

Now, 18 years after they found the house, the Garners have a son that will soon be going to college. Whatever extra money that little Haring doodle could bring, could mean a lot toward their child’s education. 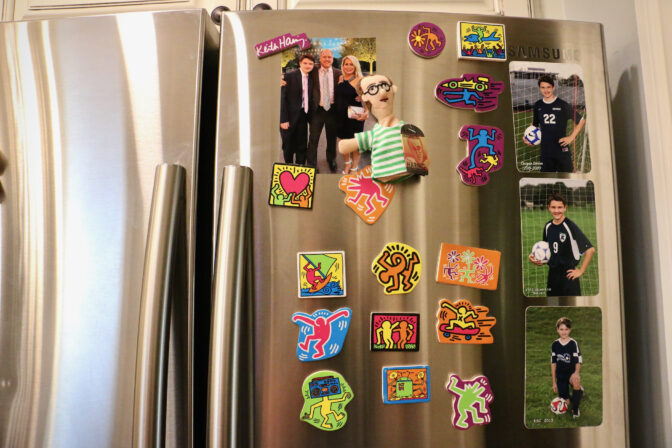 At work driving a limousine, Scott is a talker. Last winter one of his passengers was an artist, so he mentioned he had an original Keth Haring on the wall of his guest bedroom. That artist gave him the number of art consultant Christine Oaklander.

“So last December I got a phone message that just sounded so preposterous,” Oaklander remembered. “I have somewhat of a reputation for being an object adventurer, so I said, ‘Let me go out there. Nothing ventured, nothing gained.’” 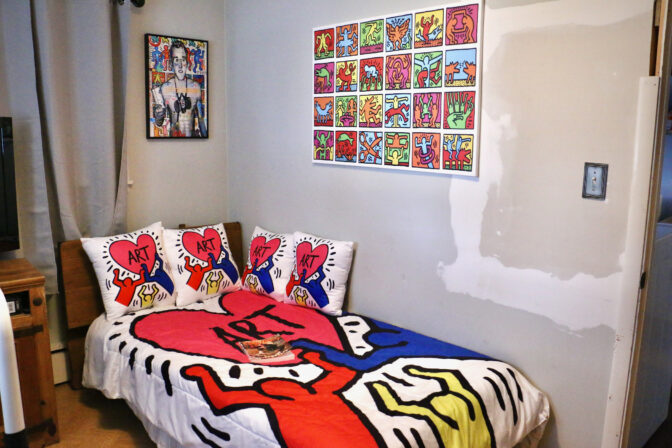 Keith Haring’s childhood bedroom in Kutztown, Pa., has been decorated like a shrine by the home’s current owners, but they removed the section of wall where Haring drew a ”Radiant Baby” in order to sell it at auction. (Emma Lee/WHYY)

What Oaklander found was a small gold drawing on a blue background, about five inches wide and three inches high – roughly the size of the light switch right below it. Over the years the wall had been painted a few times, once an errant roller brushed over the blue background, leaving trace yellow streaks. 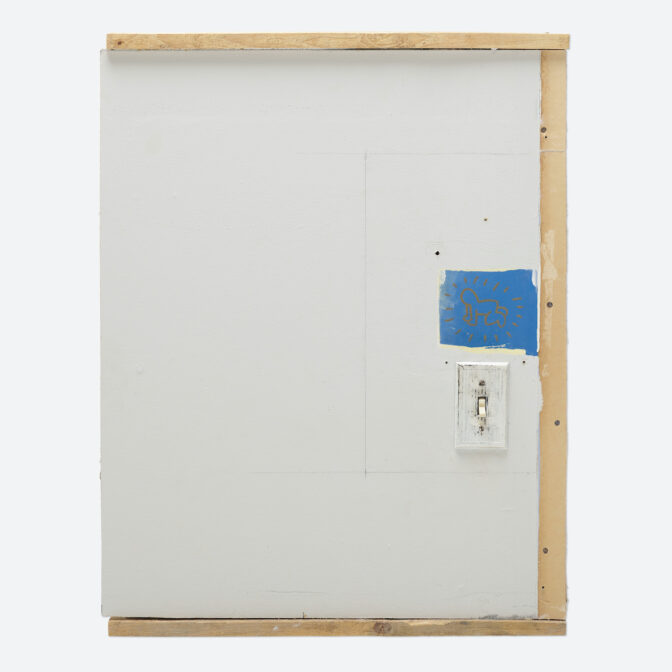 ”Radiant Baby,” by Keith Haring, painted on the wall of his childhood bedroom.

That was likely done by the previous owners who had bought the house from the Harings. The current owners, the Garners, protected the drawing behind a sheet of plexiglass.

There are lots of Keith Haring pieces of art in the world, which occasionally come into the market, but Oaklander believed she had found something special.

“We over-use ‘unique’ in art history. I’m very picky about saying that we don’t know that that’s the only one,” she said. “In this case, I feel confident that this is literally the only opportunity to acquire a time capsule of Keith Haring history.”

The Radiant Baby will be going to auction next month at Rago in Lambertville, NJ. The bidders will not just be vying for a Radiant Baby drawing, but for a piece of Keith Haring’s childhood bedroom. A piece of wall about two feet square was cut out of the Garner’s guest bedroom, which includes the drawing and original light switch plate.

In the same auction lot will be a series of cubby holes that were built by Haring’s father in the house’s pantry, each one labeled for his children to use as storage: Keith and his sisters Kay, Karen, and Kristen, had their names painted above each cubby. 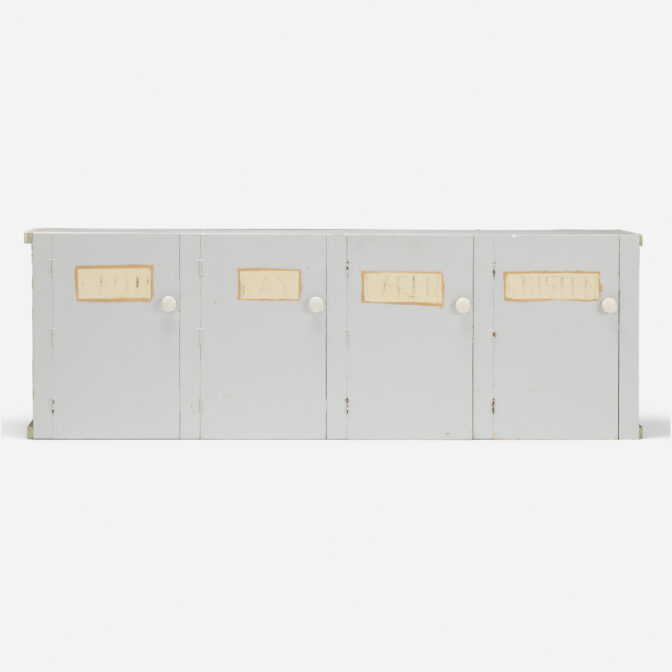 A series of cubby holes that were built by Keith Haring’s father in the house’s pantry.

The cubbies and the piece of wall, which was cut out a few months ago, will be on display for several days at the Rago auction house and online for pre-auction bidding. Oaklander said the bidding will start at $20,000, with an undisclosed reserve.

Estimates vary for how much the piece of Haring childhood home will be sold for, as there is little else in the market to compare them to. Live bidding will happen on September 14, and Oaklander hopes the gavel will come down somewhere between $80,000 and $100,000. 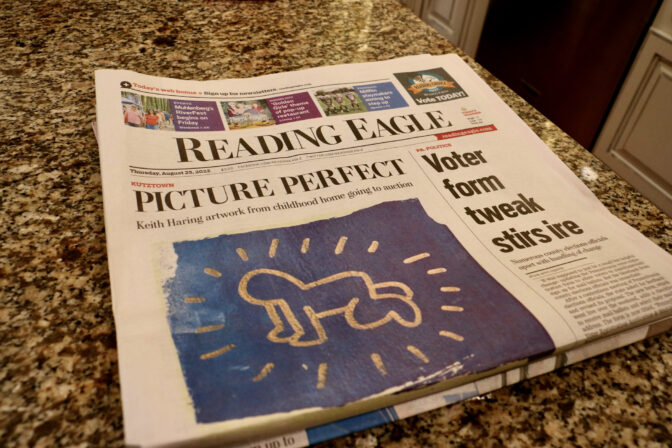 The local paper played it big when the homeowners Scott and Angela Garner decided to sell the ”Radiant Baby” that Keith Haring painted on the wall of his childhood bedroom. (Emma Lee/WHYY)

“We would be happy with that, but it has the potential to do far more,” she said.

Standing in her home next to newly patched drywall, Angela said the removal of the Haring drawing and its auction is “bittersweet.”

“It’s such a part of our home,” she said. “I think it’s time. It’s timely not only for our son, obviously, but the bigger picture here is that this is something so deserving to be shared with the world.”

She hopes the wall drawing will be acquired by a museum or public institution. However the auction is open to anyone, so nobody can predict where it will land next.