A group of local nurses and doctors from Hershey Medical Center gathered outside the hospital thursday morning to discuss what overturning Roe means for patients and staff. August 18, 2022. 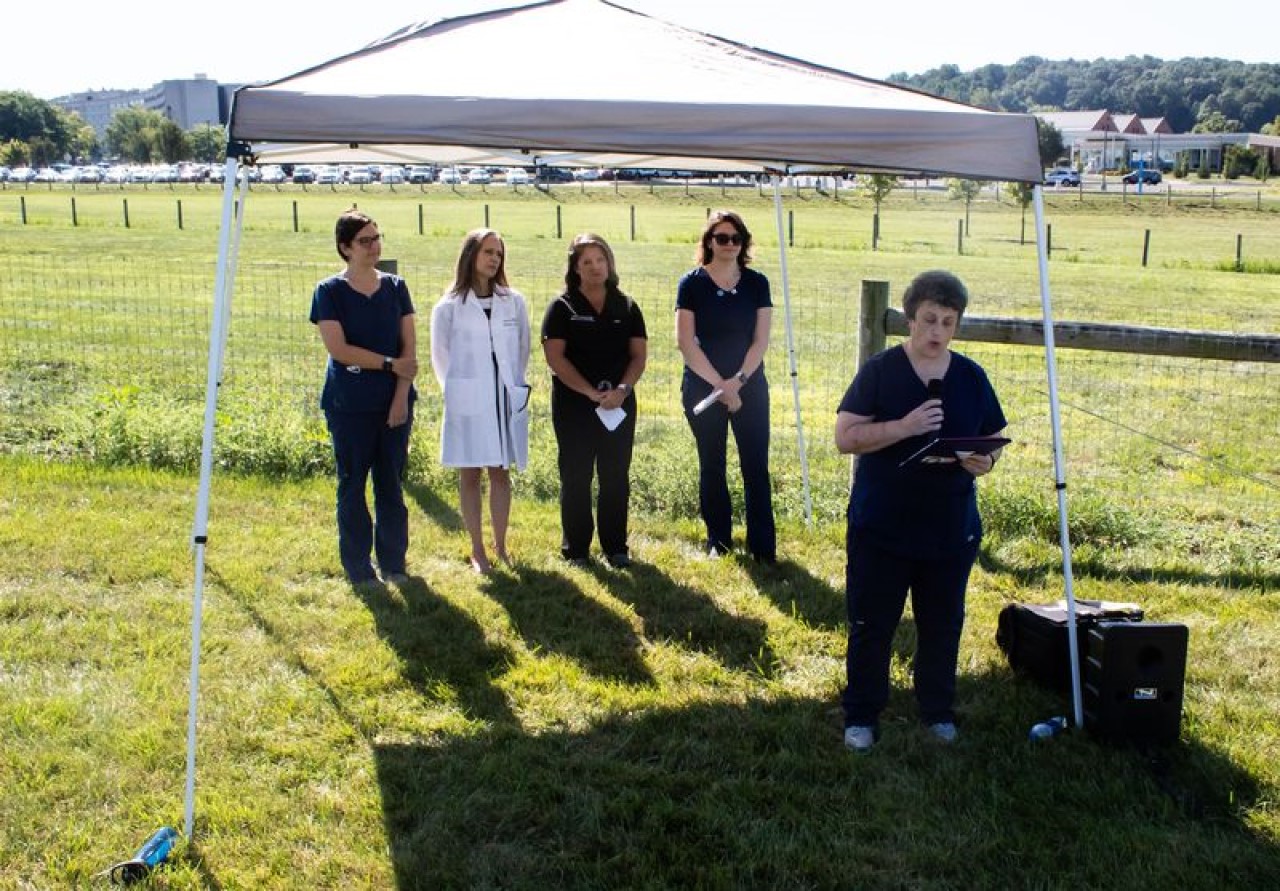 A group of local nurses and doctors from Hershey Medical Center gathered outside the hospital thursday morning to discuss what overturning Roe means for patients and staff. August 18, 2022.

Nurse Megan Corle has held the hands and shed tears with mothers faced with a decision after being told the baby they are carrying has a life-limiting disease and that their own life is threatened by continuing their pregnancy.

“These are patients making a choice, an incredibly difficult intimate choice. A choice made after having conversations with their partners, their families, their providers,” Corle said. “The last person who should have a say in this impossible choice is their legislators.”

Corle, along with other local nurses and doctors of obstetrics and gynecology, stood along a road in Derry Township on a hot Thursday morning with the Penn State Milton S. Hershey Medical Center looming in the background to urge Pennsylvanians to think about the repercussions that restricting or banning access to abortion care in this state would have.

Abortion care remains legal in Pennsylvania up until the 24th week of pregnancy or later if the mother’s life or health is at risk. However, pressure to further restrict or outlaw abortion is mounting in the wake of the U.S. Supreme Court ruling in June that overturned Roe v. Wade.

That ruling gave states the ability to determine whether women can have access to a legal abortion and made reproductive rights again a prominent issue in legislative and gubernatorial campaigns, as a proposed constitutional amendment on abortion advances in the Pennsylvania General Assembly.

The proposed amendment, which must pass both legislative chambers in the next legislative session before going to voters for approval, seeks to specify that there is no constitutional right to abortion or taxpayer-funded abortion in Pennsylvania. Currently, this state only allows taxpayer funding for abortions in cases of rape, life endangerment, or incest.

Abortion opponents say a pending 2019 lawsuit filed by Planned Parenthood that seeks to recognize abortion as a fundamental right and allow for individuals on Medical Assistance or Medicaid access to abortion gave rise to the proposed amendment. Opponents maintain that abortion rights advocates are attempting to circumvent the legislative process to get the courts to bolster abortion rights in this state.

Abortion rights supporters, however, argue a constitutional change could open the door to laws outlawing or imposing further restrictions on abortions – as has occurred in the post-Roe era in other states.

Maria Gallagher, legislative director for the Harrisburg-based Pennsylvania Pro-Life Federation, said it is critical for compassionate health care to be provided to both pregnant women and their unborn children and she further expressed hope that medical professional recognize the right to life of both the mother and the child.

“We have to remember there are two patients involved,” Gallagher said. “They both deserve compassionate care. What we want to see in Pennsylvania is a climate where pre-born children and their mothers are protected from the harm that abortion can cause. An abortion does not solve any problems. It only creates more problems. Rather than trying to expand abortion in Pennsylvania, we should be looking for ways to provide further assistance to pregnant women and their pre-born children.”

The health care professionals held their news conference Thursday at a location just outside the medical center’s campus to bring attention to the issue while protecting the hospital’s neutral position on this controversial issue.

A spokeswoman for the medical center, Barbara Schindo, said while Penn State Health supports its employees’ rights to share their opinions as individuals and health care practitioners, “it’s important to note these opinions do not represent the organization. The recent U.S. Supreme Court decision does not impact our services at Penn State Health hospitals.”

Dr. Jaimie Maines, whose specialty is to care for parents in complicated obstetric situations, said she has come away from the Supreme Court’s ruling knowing that if abortion should become illegal in Pennsylvania, “I may have to tell my patient who has been trying to conceive for years that the baby she is carrying has an anomaly that is incompatible with life.”

The patient will have to endure hearing the congratulations and questions about when the baby is due, knowing “that “there’s nothing happy at end of this pregnancy. This is because I cannot offer her termination,” Maines said.

Treatment options in situations like these will be limited and are projected to increase the United States’ already high maternal morbidity rate, the highest in the developed world, by as much as 13%, said Dr. Sarah Horvath, another obstetrician. “Patients do not need increased maternal morbidity or mortality,” Horvath said. “They need the freedom to have conversations with their care teams. They need the freedom to make decisions that are best for their own health care.”

Nurse Casey Grim shares the view that abortion is health care. “When there is a woman whose fetus has died inside her body but her body has yet to recognize the loss, in this case, we would be providing abortion care,” she said. “Without it, a woman could develop a severe infection that would cost her her life.”

Nurse Maureen Casey, an executive board member of SEIU Healthcare Pennsylvania and a chapter president of SEIU which has endorsed Democratic gubernatorial candidate Josh Shapiro, concluded the news conference, saying for all the reasons that the health care professionals shared is why “we need to elect Josh Shapiro as our next governor or our state legislature is all but certain to undo our existing state abortion laws.”

Abortion is among the many issues that clearly divide the two major party gubernatorial candidates. Shapiro considers abortion care to be a form of health care, while Republican gubernatorial candidate Doug Mastriano’s stance, as stated in a debate during the primary campaign, is to make abortion illegal and prosecute doctors who perform them.

Shapiro’s campaign spokesman Manuel Bonder said, “Doug Mastriano’s number one priority is criminalizing and banning abortion with no exceptions for rape, incest, or life of the mother; he wants to use government to take away Pennsylvania women’s freedom to make decisions over their own bodies and stop medical professionals from providing critical health care. Josh Shapiro has always defended a woman’s right to choose – and as governor, he will protect reproductive rights and stand up for real freedom.”