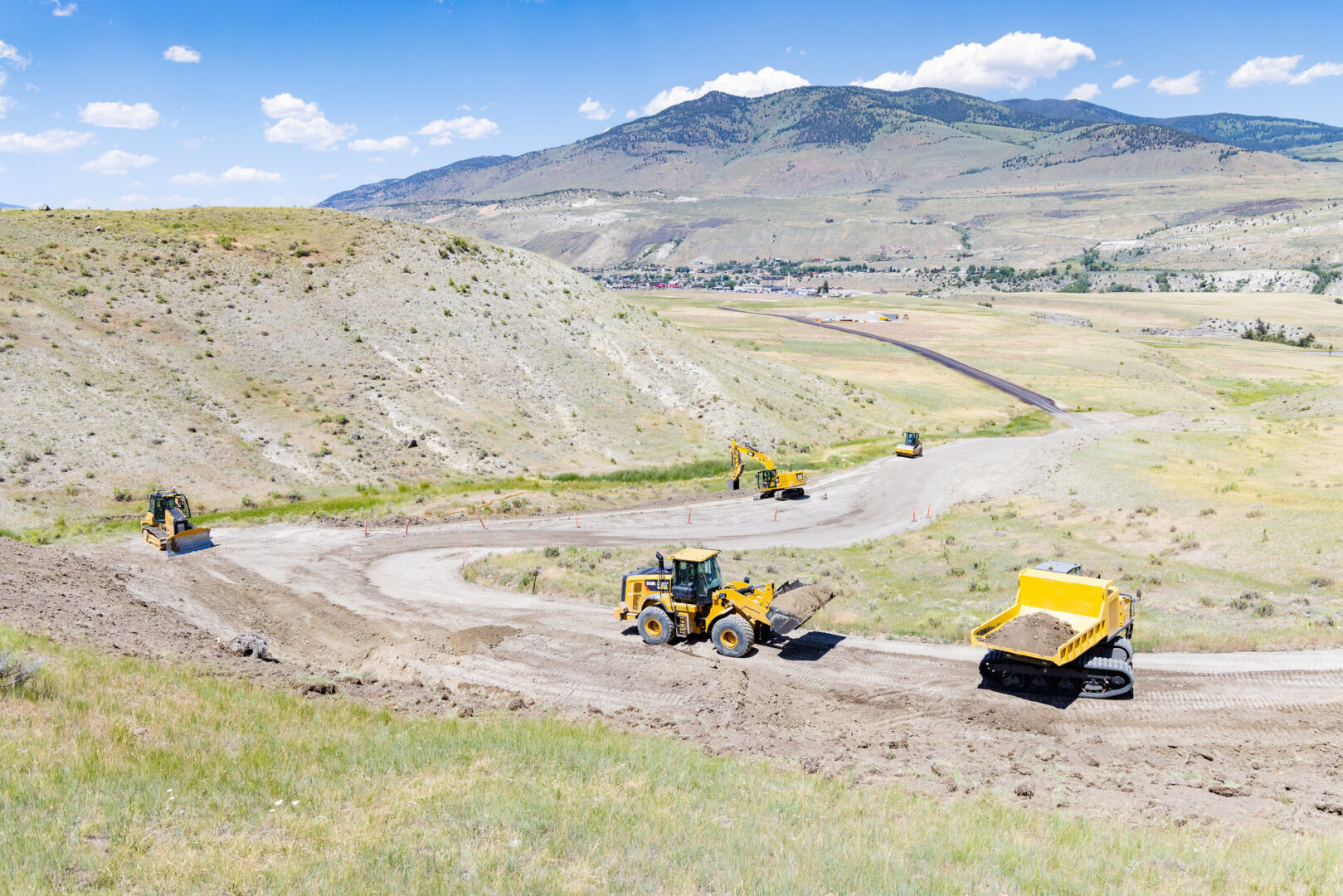 Tourism at Yellowstone National Park is down about 40% this summer after devastating floods wiped out roads in and around the park in June. Towns at two of the park’s five entrances were completely cut off from it.

The raging flood waters took out big sections of paved roads in and near the park, and now the North Entrance from the neighboring town of Gardiner, Mont., is closed. It’s expected to stay that way for at least a couple of years. 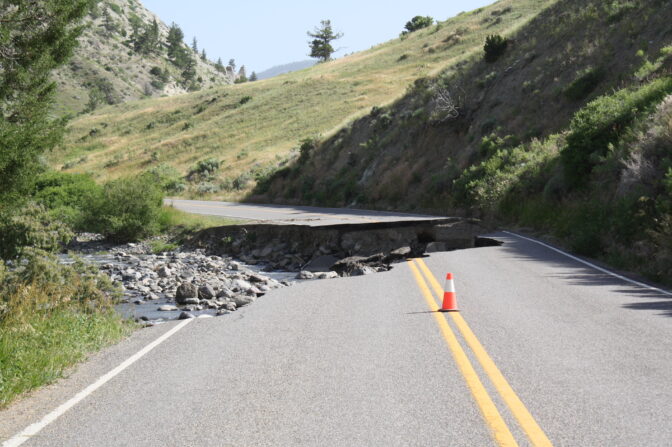 Although vehicles are not permitted, tourists can walk or bike one mile into the park on the North Entrance road, where you can see the washouts.

“Without the entrance into the national park, there wasn’t a whole lot of draw for folks to come stay at our lodges or eat in our restaurants or even participate in other activities like river rafting or horseback riding,” he explained.

About 900 people live in Gardiner, but each summer the town straddling the Yellowstone River is crowded with thousands of visitors staying in hotels and patronizing businesses that rely almost exclusively on park visitors.

In July, the park opened a lifeline: Improving an old dirt road from Gardiner into Yellowstone that is typically only used by bicyclists, hikers and one-way vehicle traffic.

It took tons of heavy equipment work to make it more drivable, but now the Park Service is allowing a limited number of guide service vehicles to use the road to bring tourists into the park. It’s still closed to private vehicles. 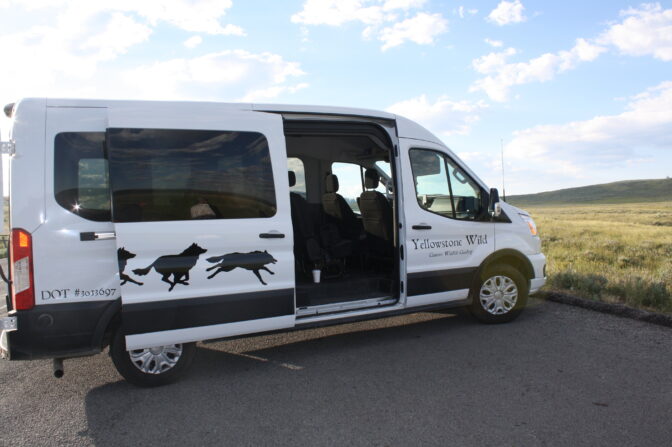 After the flood, wildlife guiding company Yellowstone Wild pivoted from focusing solely on private tours to offering public tours as a way to offer entrance into the park for people who are visiting Gardiner.

“This is the exact road that Teddy Roosevelt would have taken when he visited the park in 1903,” said DeMassino. “And before that, Chester A. Arthur, first president to come visit the park, came in on this way, so I’m going to start calling it the Presidential Route.”

A great experience for a few tourists

On a recent trip over the road, and after getting onto a still intact section of paved road, a guide driving a van full of tourists pulled over in a vast green landscape to view wildlife. After all of the rains the park got before the floods, the foliage is much greener than it normally would be in late July.

A moose nestled among some willows near a creek, and Harry Buis from the Netherlands looked through binoculars at a black bear. He and son Jean Leon were seeing Yellowstone for the first time. 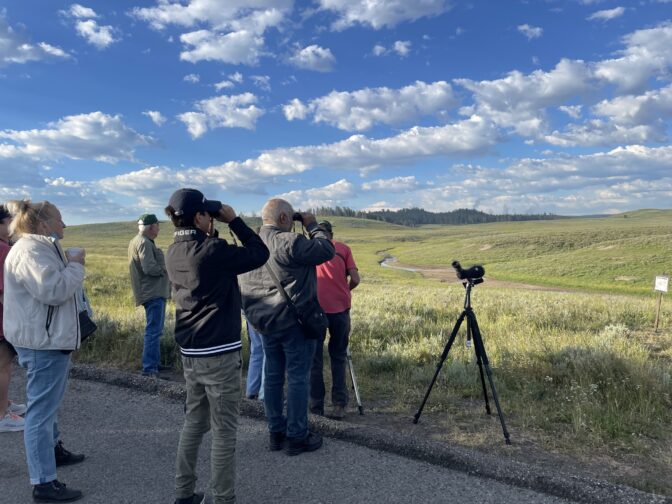 Jean Leon and his father, Harry Buis, get a closer look at wolf pups basking in the sun as they wake up to morning sunshine in Yellowstone’s Hayden Valley.

“I loved the animals we saw and was really surprised that we saw the wolves. I didn’t expect it,” Jean Leon said.

In a normal summer, this northern loop of the park roads are often jammed with cars, which cluster up along narrow pull-outs when someone spots wildlife.

Lynn Harvey, visiting from Texas, had been planning to drive her rental car into the park. She didn’t learn that the North Entrance from Gardiner was closed until she arrived in Montana. She signed on for the tour instead and wasn’t disappointed.

“And with the whitewater rafting and the trips into the park, I don’t think you miss out on anything,” she said. “We don’t feel like we missed out on anything besides the driving, and I’m glad.”

On a recent weekend day, 30 tours like this went into the park through the entrance at Gardiner. That’s compared to about 1,700 cars on a typical summer day.

Yellowstone National Park Superintendent Cam Sholly says the goal is to open up as much of the park as possible for the benefit of tourists and the businesses that depend on their spending, which is more than $230 million a year on this end of the park alone.

“Whatever we can do to as quickly as possible regain some level of access for those communities is critical for us,” Sholly said. 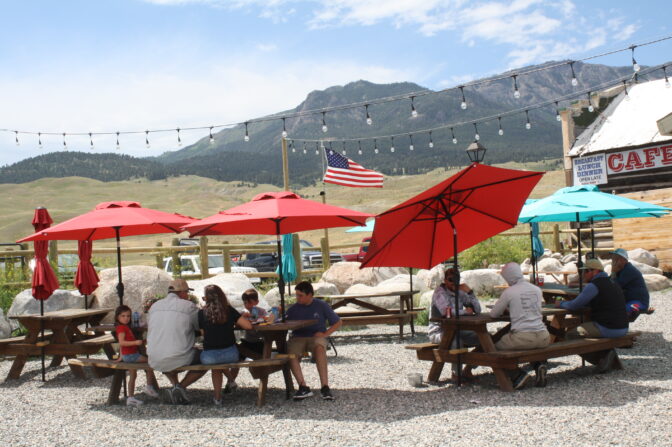 In its second year, a food truck and music venue near Yellowstone’s North Entrance decided to stay open after the flood.

He says it will likely be years before there’s a permanent fix to the park’s entrance road at Gardiner. For now, the park is trying to strike a balance between allowing guides to use the Old Gardiner Road and making sure construction crews can pave it for tourists to start using it in the interim this fall.

“We all know it’s not going to be normal,” Sholly said. “We also know that it can’t be just wide open on the Old Gardiner Road because if we don’t give those contractors time to work and they don’t finish the road before winter then that opens up a whole other host of problems that we’ll have to deal with.”

Tourist-dependent businesses in Gardiner are grateful that the park has restored at least some access, but Terese Petcoff with the chamber of commerce says the 30 or so tours going into the park each day won’t keep all of the town’s businesses afloat.

“Say you’re a farmer, it’s like your entire fields collapsing into a sinkhole,” she said. “That’s how I’d put it in comparison for people who aren’t from around here or who haven’t experienced a tourism economy.”

Four hotels and three restaurants in Gardiner have already closed.

The Absaroka Lodge, built right above the banks of the Yellowstone River, with an occupancy of 41, is still open.

Kiana Linares works at the front desk and says the lower level in one of their buildings is vacant.

“I don’t think we’ve actually had any people check in that had already booked tours,” she said. “I think they are booking them as they get here once they realize they can’t get in unless they book a tour or drive to West Yellowstone.”

The West Entrance is about a three-hour drive from Gardiner.

Businesses here hope the planned improvements to the Old Gardiner Road will be successfully completed in October as planned. Every winter all four of the park’s other entrances close, so road access from Gardiner, which is usually open year-round, could help the town have a good winter tourist season.