"Without the writing, there's no performance." 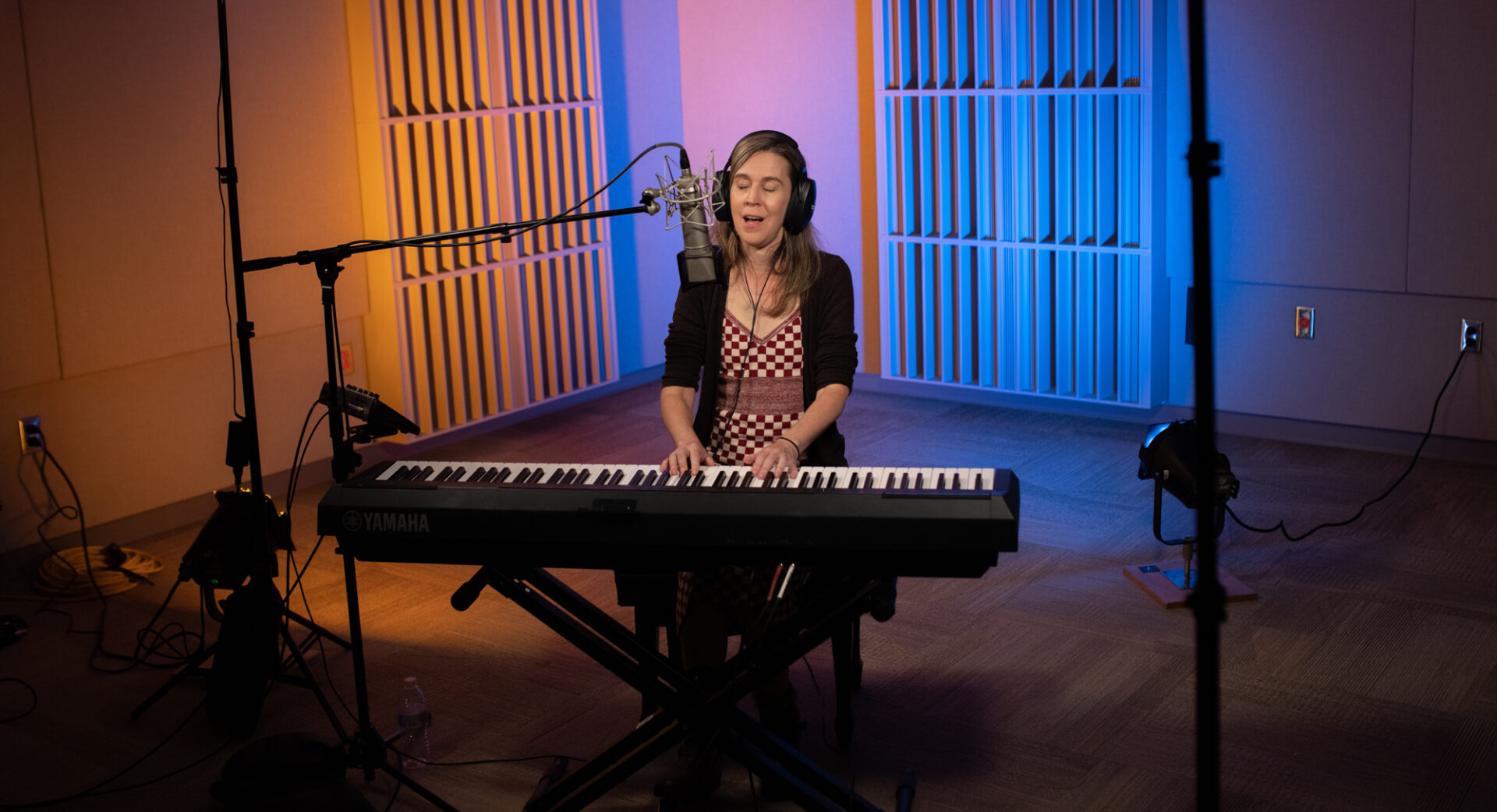 “I really came to music as a writer and that’s still my orientation. It took a long time for me to even call myself a musician,” she says. 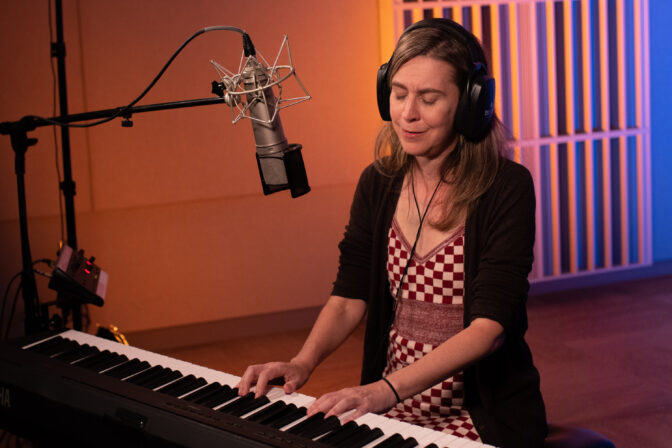 Perched on a piano stool in the WITF performance studio, Jessica recounted her path from writer to musician, shared insights into her songs and talked about the struggle to find intimate performance spaces where an artist and audience can really connect.

Before focusing on music, she published poetry and non-fiction. She eventually felt burnt out and turned her focus to music, but it wasn’t a smooth transition. She had never thought of herself as a musician, and it took years before she accepted it.

“I felt like an imposter. I wasn’t the kid with a guitar, a piano in high school or college. To a lot of my friends and people who knew me, it was something that I started doing out of nowhere. And there was a lot of self-consciousness about that. It’s really only been the last four or five years that I’ve felt just fully confident, fully at peace with what I bring and what I don’t bring.”

After winning a national songwriting contest, Jessica went all in on music. She toured often between 2010 and 2012. Soon after that she got married and had her first child, and she decided to take a break from her travels.

“I lost the desire to be doing a lot of traveling and a lot of performing. So for the last eight years since I started having my kids, I’ve been in a constant state of recording. I’m always in the studio with some kind of project. And I take a long time. I’m a perfectionist. I see recording as an opportunity to get everything exactly the way I want it. Now I’m entering a period of, I’ve been in the studio, I’m gonna continue recording, but I’m interested in performing again and trying to figure out how that’s gonna work and what it means.” 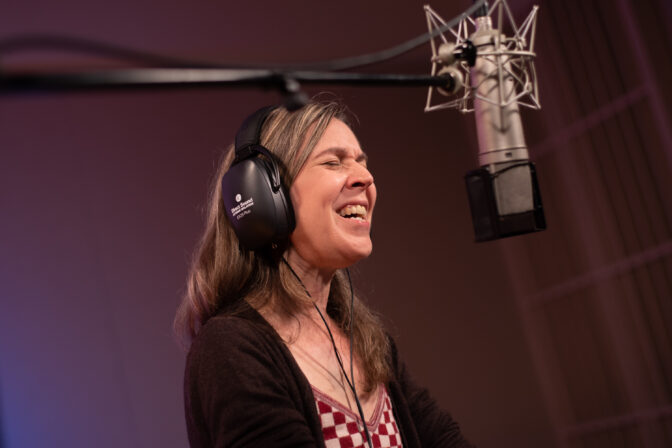 Jessica’s idea of how and where she wants to perform has been refined since her last bout of touring. When she finally felt ready to go out and perform again this summer, she scheduled a handful of bar gigs to brush up on her chops. And it was the first of these shows that abruptly brought everything into focus.

“The first one I did, everything about the show was just fine. Everybody was perfectly nice. I got paid well. And I left and cried the whole way home because I felt like I’m writing these songs that need an audience. I want to be careful how I say that because I have total respect for musicians who can play bar gigs and make their living that way. It’s something I wish that I had the heart to do. But I’m so glad I did that show and had that experience of feeling that because it put me back on a vision for my music.”

A lot of what many creative people write about are those highs and lows. I tend to look at the plateau moments and [ask] ‘Where’s the tension here? What needs to be solved or what needs to be pushed or pulled?’

Jessica discovered she’d rather do fewer but more rewarding performances rather than trying to do as many as she can.

“I’m not one of those people who can just go out on tour for months on end and perform every night. I get too depleted, I’m an introvert. I need that grounding time. My ideal scenario is that I perform maybe five or six shows a year. I prepare a lot for them. And I have a listening audience who is really interacting with the songs in real time.” 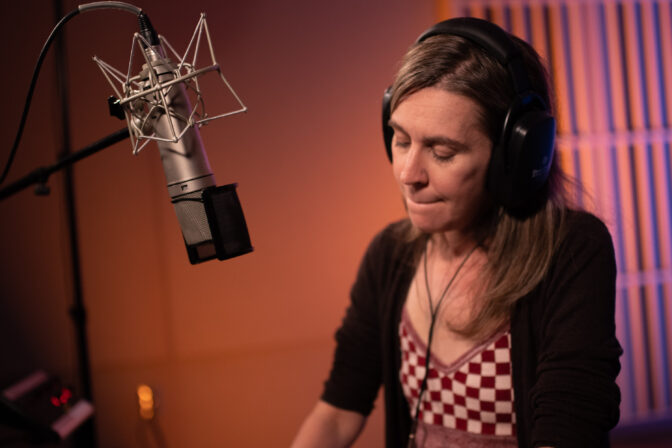 Jessica’s lyrics provide a lot for a listening audience to engage with. Her songs are a magnifying glass, enlarging the details of common experiences and situations. Recently she’s found an interest in focusing not on the highs and lows of life, but the often overlooked in-between places.

“I’ve been writing a lot of songs about that kind of middle part of love, the middle part of a relationship where it’s not new and it’s not falling apart. Everything’s okay. It’s just…eh.”

“The Rose of Jericho” is one such song, drawing a comparison between the desert plant of the same name which can appear to be dead but will rise up and bloom when it gets a bit of water.

“And so I latched onto that image of the rose of Jericho as sort of looking at a relationship and the dry time when you’re craving connection and you feel like it really won’t take much, you just need to look at each other. You just need that moment to have the spark again, and then things can bloom and you can feel okay.”

“A lot of what many creative people write about are those highs and lows. And those things are great. They’re very dramatic. It’s natural that there are more songs about those moments in life. But I tend to look at the plateau moments and [ask] ‘Where’s the tension here?’ What needs to be solved or what needs to be pushed or pulled.” 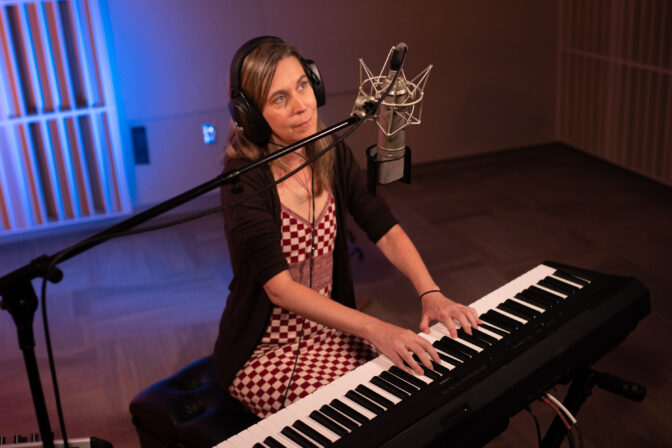 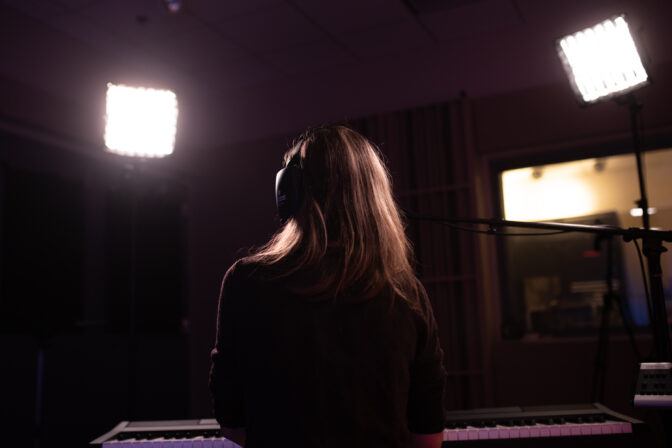 Jessica doesn’t write about politics or world issues much, and yet she feels like solutions to big problems can be traced to these smaller moments she talks about in “The Rose of Jericho”.

“When I Was the Weather” is what Jessica refers to as a parenting song. It was prompted by a conversation she and her husband had while she was pregnant with their second child. They were wondering what the baby would be like when they turned that question around and wondered what the baby thinks about them right now.

“And my husband just blurted out, ‘I think we’re probably like the weather.’ Like you hear thunder in the distance and you understand what it is, but you don’t really know exactly where it’s coming from or what it is.”

“I just immediately [said], ‘I can’t believe you just said that! I have to write a song about it.’ And so the song ended up being written to the older child and the metaphor of the weather is when I was the weather, when you were inside me, this is how it felt. Now that you’re out in the world, oh my God. It’s actually really confusing. And you never, ever get to feel like as much of a failure as you do when you have kids.”

Some of Jessica’s songs aren’t so personal though. Sometimes she feels like she’s channeling someone else’s experience, telling their story through her lyrics. Her song “Sweet & Broken” felt that way.

“It felt like it was about a death and it felt like the narrator of the song was on a grief walk. And this setting for me is very much in downtown [Lancaster]. There’s some specific imagery when I sing it. The graveyard in the second verse, the statue of a lady, that’s a really specific statue in a graveyard in Lancaster. It’s just the idea of somebody walking through a city feeling this loss that might not even be a recent loss. From a long time ago. But there’s something about it…even though it’s not my story, I really connect to it when I perform it and it becomes very easily an emotional experience for me.”

Jessica’s next project is to create performance opportunities for herself and other songwriters as well as audiences that want to listen and engage with music. She reached out to Zoetropolis, a cinema and performance space in Lancaster, and is launching a singer-songwriter series.

“I just had this idea that I want to do a songwriter series where it’s three songwriters performing in the round in a listening room format and that I would try to bring some of my friends from other places to come and do that show. [Zoetropolis was] interested in the idea. And so we have two shows on the calendar for September and December.” 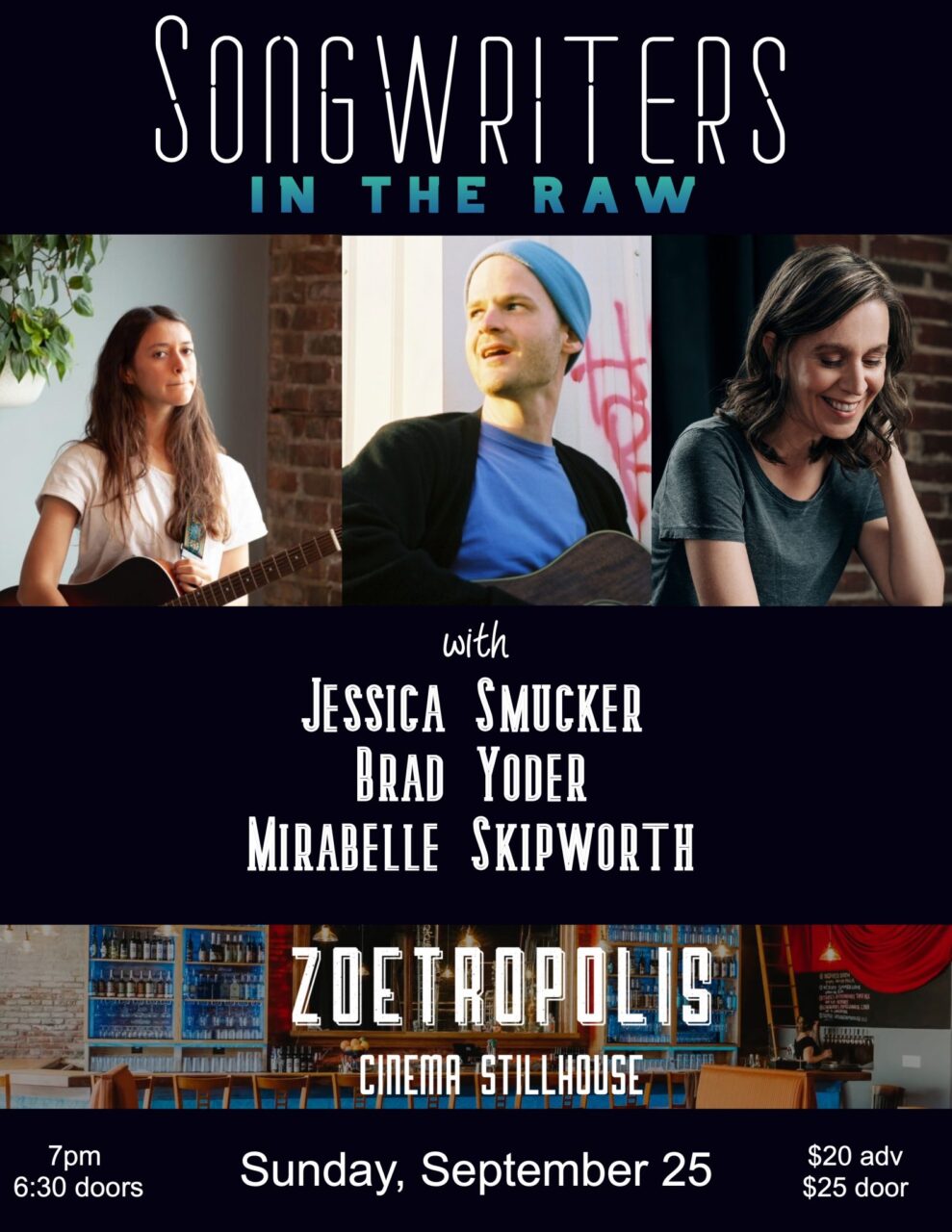 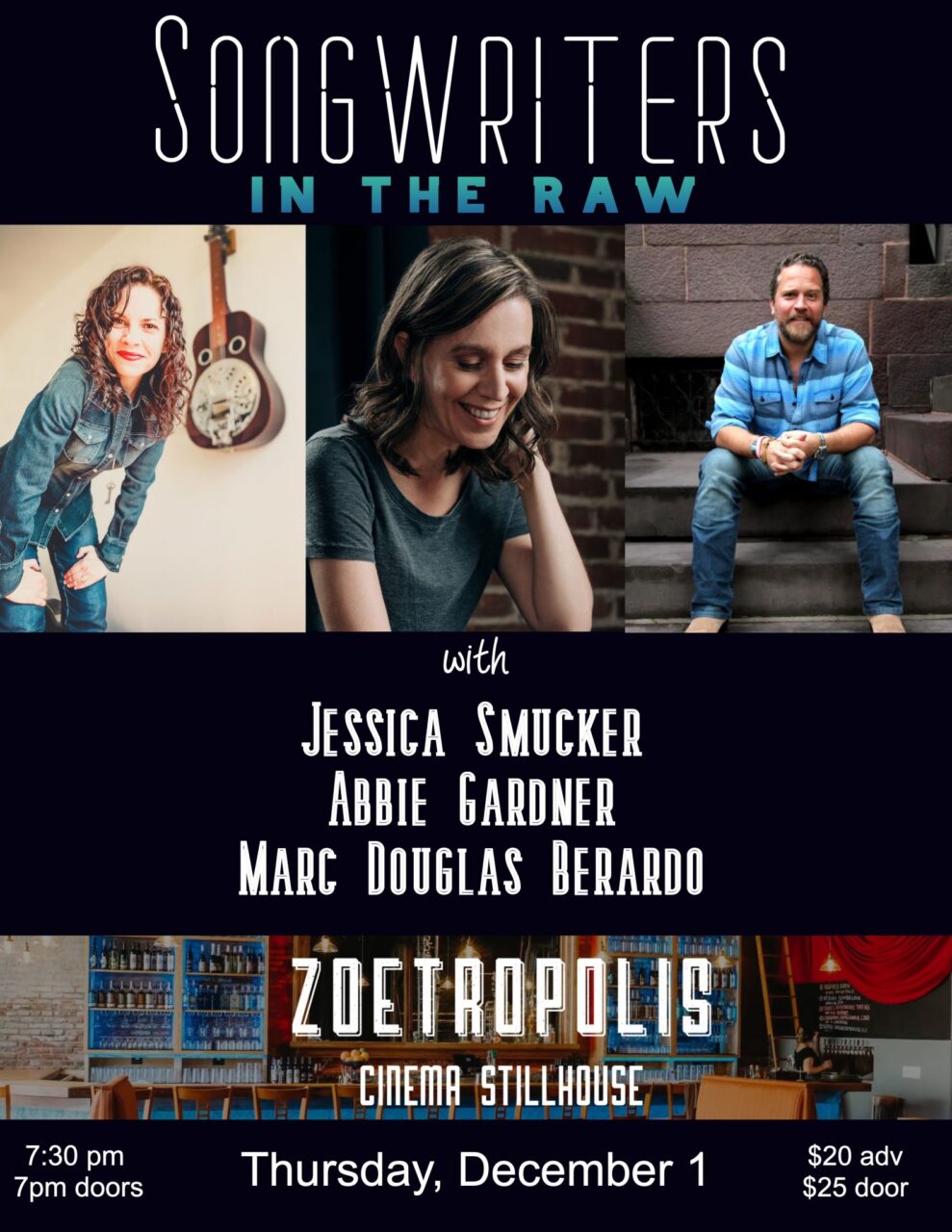