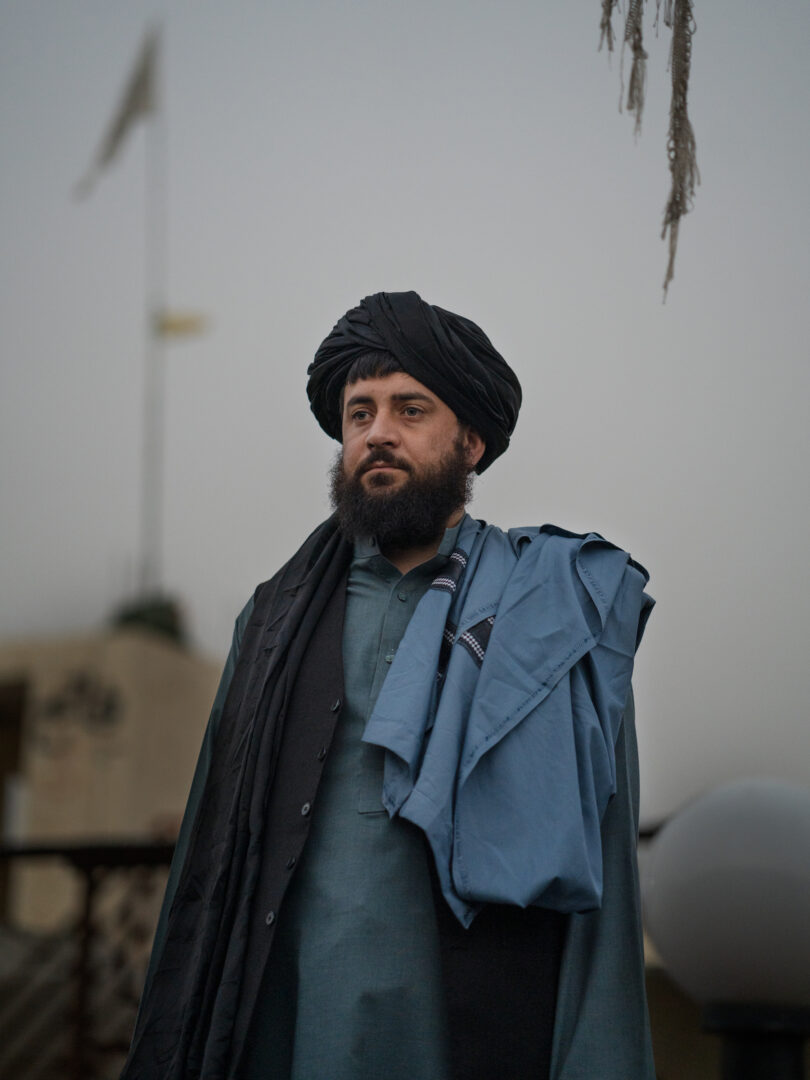 On the day a U.S. drone strike killed the leader of al-Qaida in Afghanistan, the man in charge of the country’s defense sat down for an interview.

At the time we met Mullah Mohammad Yaqoob Mujahid, many Afghans knew there had been an explosion in Kabul, but not what it was. If Yaqoob knew more, he wasn’t saying. He acknowledged “an incident today” but said it wasn’t serious. It was 24 hours later when the Taliban said their preliminary investigation confirmed a strike by “American drones.”

Our talk with Yaqoob illustrated the demands facing the Taliban now that they have gone from an insurgent movement to Afghanistan’s de facto power. Their role changed abruptly on Aug. 15, 2021, when they swept into the capital after the government collapsed. Rather than disrupt security, they are expected to provide it. Rather than undermine the government, they are expected to govern.

As the anniversary neared of the Taliban’s time in power, I asked to speak with Yaqoob, who said his group wanted better relations with the United States. Any prospect of that depends on how the Taliban rule.

Yaqoob is part of the second generation of Taliban leadership. He is a son of Mullah Muhammad Omar, the cleric who led the Taliban during their first time in power from 1996-2001.

To meet him on July 31 we caught a plane from Kabul — where some members of our NPR team heard the drone attack that morning — to Kandahar, the Taliban’s traditional power center. We weren’t told the exact time or place of the meeting in advance. Instead a car came to guide us there, so we only learned the location as we arrived. It was an old insurgent’s security technique.

We drove onto the compound from which his father once ruled — a tree-lined area in the shadow of two craggy mountains. Yaqoob, in his early 30s, told us he remembered running around that compound as a child in the 1990s. Those were the years when his father presided over an emirate that enforced a very specific idea of Islam. The Taliban hanged a former president. They held public executions in stadiums, destroyed a historic site, mandated burqas for women and denied most of them a chance to work or go to school.

Omar also sheltered Osama bin Laden, and refused to turn over the al-Qaida leader when the United States demanded him after 9/11.

Yaqoob followed his father into hiding when the U.S. attack began in Oct. 2001. Omar’s compound later became a base for the United States and its Afghan allies, eventually surrounded by blast walls and checkpoints, dotted with the wreckage of military vehicles and physical training equipment. One of its buildings was renamed the “Kentucky Wildcuts Barber Shop.” Omar died in 2013, but the son rose in the Taliban leadership and now has reclaimed his childhood home. 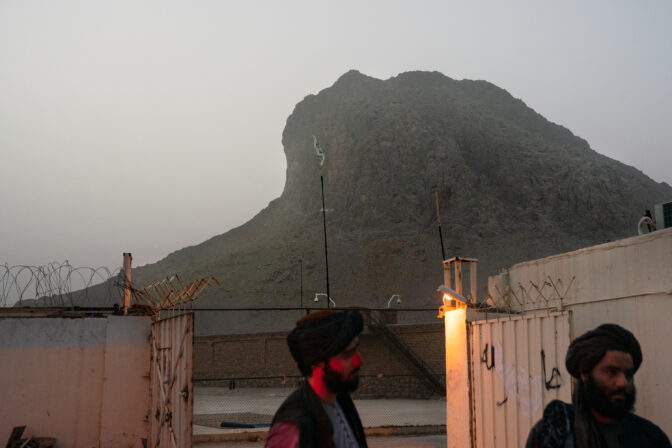 A mountain overlooks the compound from which Yaqoob’s father, Mullah Muhammad Omar, once ruled. Omar was the cleric who led the Taliban during their first time in power from 1996-2001. Later the compound became a base for the United States and its Afghan allies, but is now back in Yaqoob’s hands.

We asked if he would show us around, but Yaqoob demurred. “The CIA has videos if you want to see them,” he said. He nonetheless sat with us for more than an hour, pausing once to give his evening prayer before we resumed. He said he was happy for our visit because he wanted to explain “the truth to the world and especially the American nation.”

Yaqoob is styled the interim defense minister — “interim” because for the past year the Taliban have called their administration a provisional government. So far it’s recognized by no other government in the world. They are running the bureaucratic machinery of the old Islamic republic, at least the parts that have nothing to do with democracy, which they have ended. They haven’t said what form of government should replace it.

“So far, there is no decision made about it,” Yaqoob said. “I think for a while it will go on as an acting government, and depending on Afghanistan’s condition, we will take the next step.”

We knew that Taliban and other religious leaders had held a mass meeting earlier this summer on the west side of Kabul. The group’s supreme leader, Hibatullah Akhundzada, gave a speech in which he said he took no account of demands by the West, that not even atomic bombs could weaken their resistance. But having said what he would not do, Akhundzada left the stage without saying what he would do. 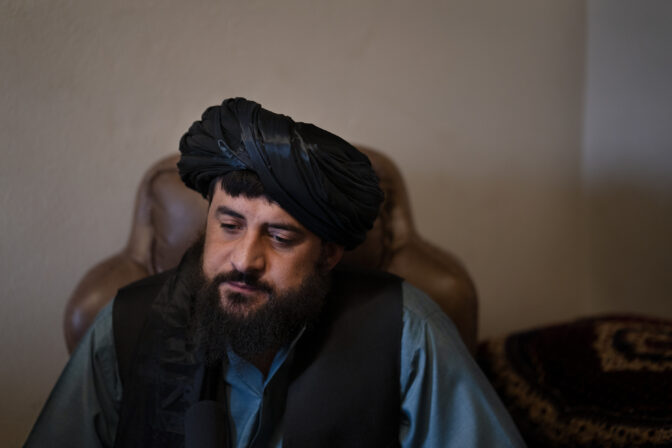 Yaqoob rose in the Taliban leadership and now, in his early 30s, has reclaimed his childhood home.

This leaves many questions unanswered one year after the takeover. Some Afghan girls are in school while others are barred. Some women are still working while others cannot. Even leading ulema, or groups of religious scholars, have said it is appropriate for middle school and high school-age girls to return to class.

“This is a serious issue for us,” Yaqoob said. “Hopefully there will be more about it.”

Other Taliban officials we met during our journey said they must move slowly and prepare the political ground. They’re concerned that some Taliban fighters, ideologically trained as they are, may turn against their own leaders. While the leadership debates, the current policy has led to widespread calls for change, even in very conservative, Taliban-dominated valleys.

Strictly speaking, there is no rule of law at all. Afghanistan’s republican constitution is not considered in effect, and nothing has replaced it. Some of the old laws are enforced — particularly tax laws; it’s widely said here that the Taliban have been effective tax collectors — while others are considered defunct. The Taliban have allowed the free media to continue reporting the news, but also have been accused of beating journalists or demanding that they change their coverage. The disappearance of a media law leaves journalists uncertain of their rights. Establishing constitutional law is a “necessity,” Yaqoob acknowledged.

There also is no transparent means to investigate numerous allegations of human rights violations by Taliban forces across the country; a United Nations report recently alleged hundreds of extrajudicial killings, arbitrary arrests and instances of torture in the first 10 months of Taliban rule. Yaqoob rejected the report but asserted that military courts were in place to prosecute those who committed abuses. 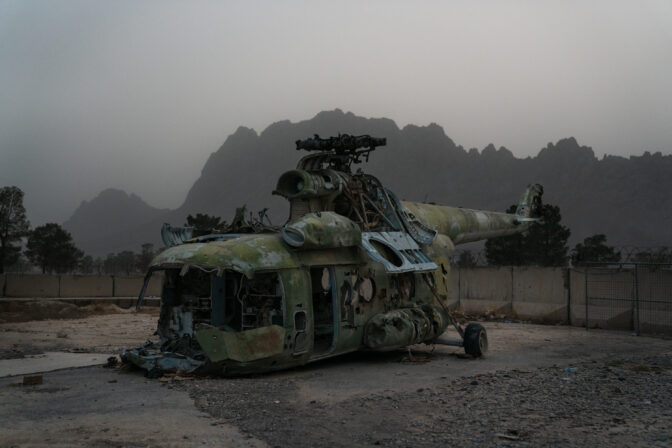 A destroyed helicopter sits in a cornerof the compound.

Yaqoob’s primary responsibility is security, which he described as “100% OK,” though the later revelation that al-Qaida’s leader was living in the center of Kabul cast the statement in a different light. The Taliban have waged brutal war against the Islamic State but historically have been more tolerant toward al-Qaida, dating back to the time when Yaqoob’s father sheltered bin Laden.

Asked if he wanted better relations with the United States, Yaqoob laughed.

“This is obvious,” he said, adding that recognition of the current regime was in the United State’s own interest because the U.S. had no other regime to deal with. “There are many countries that are more against America than us, but they recognize them officially,” he said. “There are more countries in the world that pose more danger than Afghanistan to America, but still America recognized them officially. I think that recognition is a positive step toward a bigger change.”

Yaqoob said he had heard that U.S. officials consider recognition politically impossible because the American people would be against it. “If that is true, I ask from the nation of America to put pressure on the government,” he said. And if they don’t, then “the claim of friendship with the Afghan people is more fake than honest.”

Other Taliban leaders compare their country to Vietnam’s communist government, which fought the United States in what had previously been America’s longest war, but later became a trading partner and even in some ways a friend.

One difference, however, was demonstrated when President Joe Biden announced that a U.S. drone had killed the al-Qaida leader living just a few blocks from the Taliban’s ministry of intelligence. U.S. officials regard extremist groups in Afghanistan as an ongoing threat, even if it is much diminished from years past.

Securing Afghanistan against such threats used to be the United States’ problem, along with their Afghan allies. It’s the Taliban’s problem now, with the United States and its drones overhead and watching.