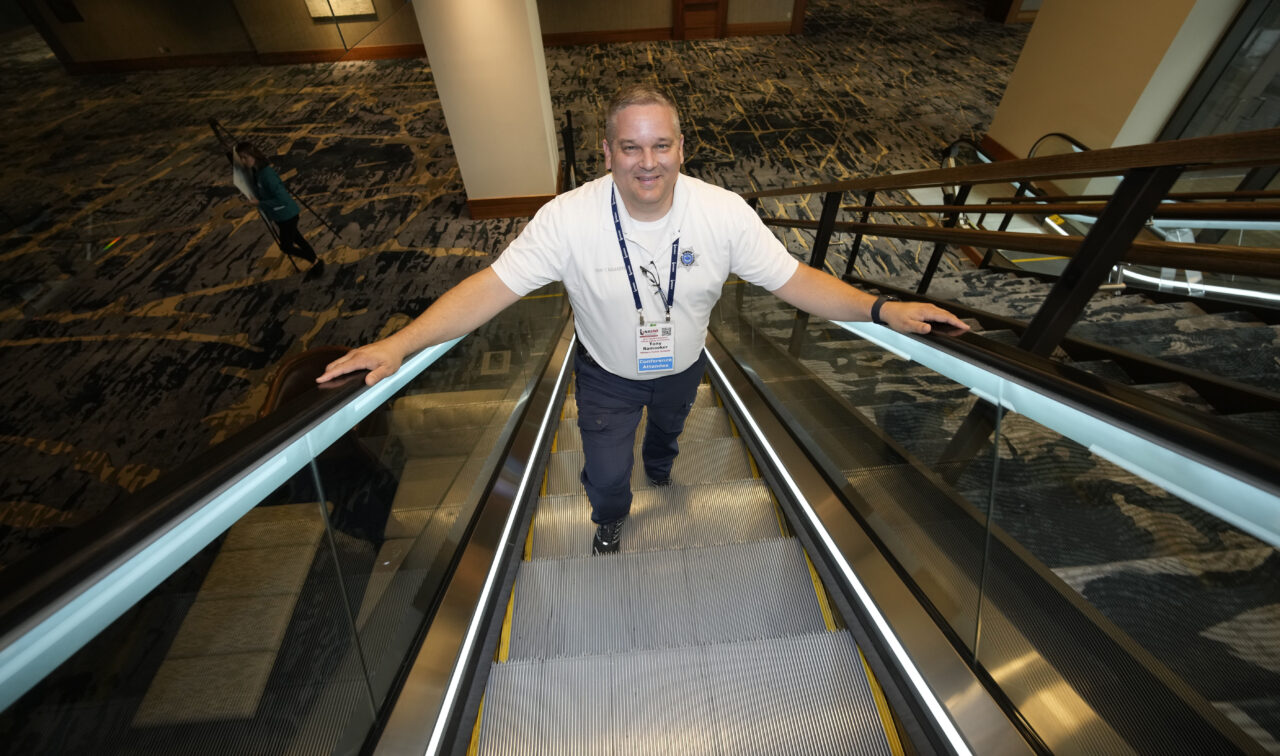 Tony Ramaeker averages around 14,000 steps a day as he walks around the Nebraska high school where he is assigned to work as a sheriff’s deputy, greeting students arriving in the morning, wandering the hallways to talk to them and watching out for those who might be eating alone in the cafeteria.

The former Marine and longtime youth pastor keeps his office in suburban Omaha stocked with treats such as Little Debbie snacks and Pop-Tarts because eating helps kids in crisis calm down and talk.

But in the back of his mind, a thought always looms: What would he do if a gunman attacked the school?

The latest reminder of that danger came in May when 19 children and two teachers were killed in a fourth-grade classroom in Uvalde, Texas. The fear that the next shooting could happen in their hallways hangs over school resource officers across the United States, exacerbating an already difficult job: They’re called on to be battle-ready officers whom parents and students can trust to protect them. 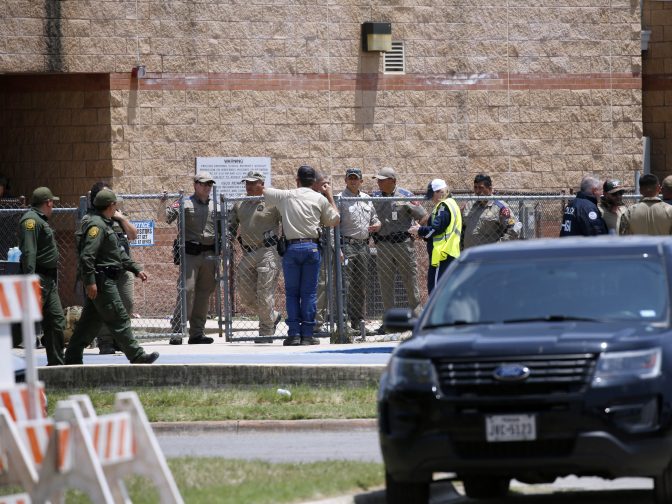 FILE – Law enforcement, and other first responders, gather outside Robb Elementary School following a shooting, May 24, 2022, in Uvalde, Texas. The children who survived the attack, which killed 19 schoolchildren and two teachers, described a festive, end-of-the-school-year day that quickly turned to terror.

Yet school police officers have been criticized for their treatment of students of color. Black students, especially, are often disproportionately arrested or disciplined when a school has armed police, critics say. And students of color report feeling less safe around police than white students.

Officers say they’re acutely aware of the criticism, striving to build relationships with students and interact for more reasons than just discipline. They stress that officers who work in schools need to be specifically trained to work with children and teens. Gone are the days when it was enough to hire an officer near or in retirement and keep a police car parked outside a school. School officers are now asked to be counselors and teachers, working empathetically and diplomatically with students and administrators, while also being an armed guardian.

Ramaeker, who practices mixed martial arts, said he believes he wouldn’t hesitate to do whatever he could to protect his students and staff. He has even thought through how he would use the handgun he has holstered to his hip if he didn’t have time get a rifle he has kept secured in the building since the 2018 Parkland school shooting. He believes officers need to decide what they would do before a shooting happens to be mentally prepared and avoid indecision.

“If someone comes in to try to hurt a part of my family, whether it’s my blood family or my school family, there is no hesitation,” he said.

Reminders of the threat of school shootings were omnipresent at a recent National Association of School Resource Officers conference in Colorado where hundreds of officers gathered for training.

An exhibit hall featured booths with businesses selling ideas to stop the next school shooter, like door locks, and simulation machines to mimic shootings. One business showed off foldable assault rifles it said one school resource officer takes in a Hello Kitty backpack to his school in Alabama.

“Mom and Dad don’t want to see this weapon in their school, but it’s got to be there,” said Dan Pose, CEO of Gulf Coast Tactical, which sells the rifles.

Officers also sat in on sessions to learn about what went right and wrong at past school shootings. In one of those, they heard about the failure by a school safety monitor to send out an alert when he initially spotted the Parkland school shooter walking onto the campus. The armed school resource officer accused of hiding during the shooting was later charged with being criminally negligent.

In another, they got a briefing on a 2019 school shooting in Colorado, in which a private security guard who was secretly armed accidentally wounded two students.

A Colorado county sheriff also pointed to a more subtle failure in the response to that fatal 2019 shooting: Officers unnecessarily traumatized evacuated elementary students by having them line up with their hands on their heads even though authorities knew the gunmen involved were either teens or adults.

“That right there will last a lifetime,” Douglas County Sheriff Tony Spurlock said, pointing to the photo of the children, one of whom has her hands folded in prayer instead. Later, he explained that he wanted to encourage school resource officers to use their discretion and find ways to minimize trauma to children.

Officer Roy Mitchell Jr. said he tries not to let preparing for a shooting rule his thoughts, but he watches out at entrances and windows for anyone unfamiliar headed into the suburban Baltimore high school where he works. He also considers where he would he would try to move students to should there be an attack.

“I try to always have some type of a game plan in my head,” he said.

Mitchell, Ramaeker and other officers in Denver for the conference stressed that building relationships and getting to know what’s going on in the lives of students is vital for all aspects of the job — whether they’re acting as confidants or cops.

Some offer to help make waffles and pancakes in cooking class or fill-in to serve lunch when cafeteria workers are out sick. Others squeeze into desks in the back row to observe what students are learning. They’re encouraged to teach a class, on topics such as citizens’ civil rights and the legal process. They keep an eye out for who drives what cars, who is dating whom and who might be eating lunch in the bathroom because they have no friends.

It’s an intense version of community policing that they hope will make them positive role models while also helping them learn about any kinds of threats that emerge in their schools. 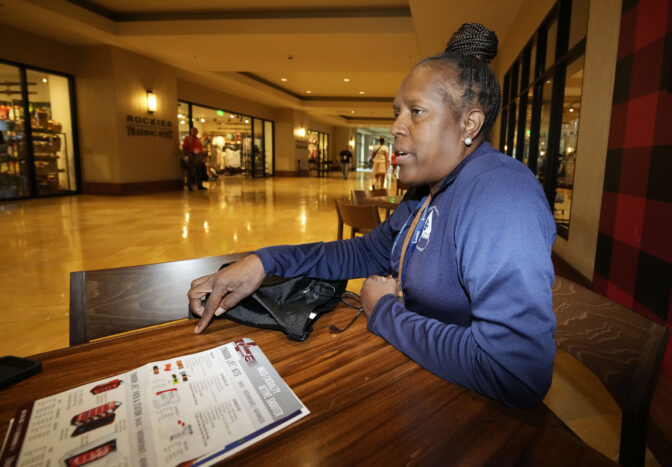 Lt. Sandra F. Calloway-Crim, who has been a school resource officer in Valley, Alabama, for 18 years, said she got a call late one night after patrol officers found a 13-year-old student at one of her schools wandering outside alone in his pajamas. She knew the boy’s father would be working the night shift but that his mother would be at home, and directed the officers to take the boy there.

Still, some activists say police don’t belong in a school at all. Some districts got rid of police officers in schools during the protests over racial injustice following the murder of George Floyd in 2020 amid criticism that they have disproportionately arrested Black students, sweeping them into the criminal justice system.

Officers from Fremont, California, were removed from schools but brought back a year later after negotiating terms of a new agreement with officials. They spoke at the recent conference, encouraging supervisors to keep track of all the positive interactions they have with students to help balance the reports about investigations and arrests that police normally only document. 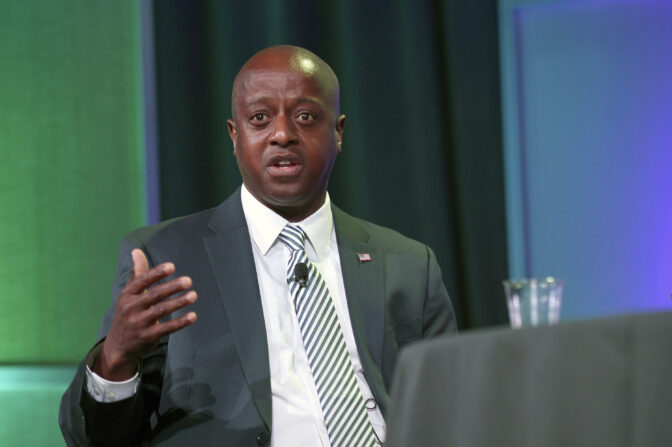 Don Bridges, who started a school resource officer program in suburban Baltimore in 1989, speaks at the National Association of School Resource Officers convention in Aurora, Colo., on July 5, 2022. Bridges saw the program as a way to build relationships between students and law enforcement after seeing too many people who looked like him getting arrested when he worked in patrol. He said having police in schools does not lead to Black students being targeted when officers are properly trained. (AP Photo/Thomas Peipert)

Don Bridges, who started a school resource officer program in suburban Baltimore in 1989, bristles at the “school to prison pipeline” criticism. Bridges, who is Black, saw the program as a way to build relationships between students and law enforcement after seeing too many people who looked like him getting arrested when he worked in patrol. He said having police in schools does not lead to Black students being targeted when officers are properly trained.

Detective Beth Sanborn drops what she is doing at home and heads into work whenever her phone explodes with messages from students at the campus where she works in suburban Philadelphia about a social media post seen as threatening.

She feels guilty sometimes for putting the needs of her “school kids” ahead of her own children. Emotional crises, fights and the fallout from failed relationships tend to be more at the front of her mind than the possibility of a shooting but she said building relationships with her students is the key to preventing all kinds of problems.

“While it always has the potential to be there, what we hope is that by stressing that sense of community, that we can avert any kind of violence,” she said.

After Parkland’s school resource officer failed to intervene when a student opened fire in 2018, students at a high school in Cullman, Alabama, asked Officer Seth Sullivan if he would promise to protect them.

“You’re damn skippy I’m going to be in there. Those are my kids,” Sullivan said.

Bin Laden was the face of al-Qaida, but Ayman al-Zawahiri was its hate-filled heart