Kelsey Brown is employed as an operations specialist at Formlogic, a manufacturing startup in Lawrenceville that seeks to automate the work of skilled machinists. Brown previously held a series of jobs in the service industry, but Formlogic hired her in May to load and monitor factory equipment. Her work helps the company to gather data to build its software.

How long can workers compete with AI? The fate of two Pittsburgh factories could offer clues 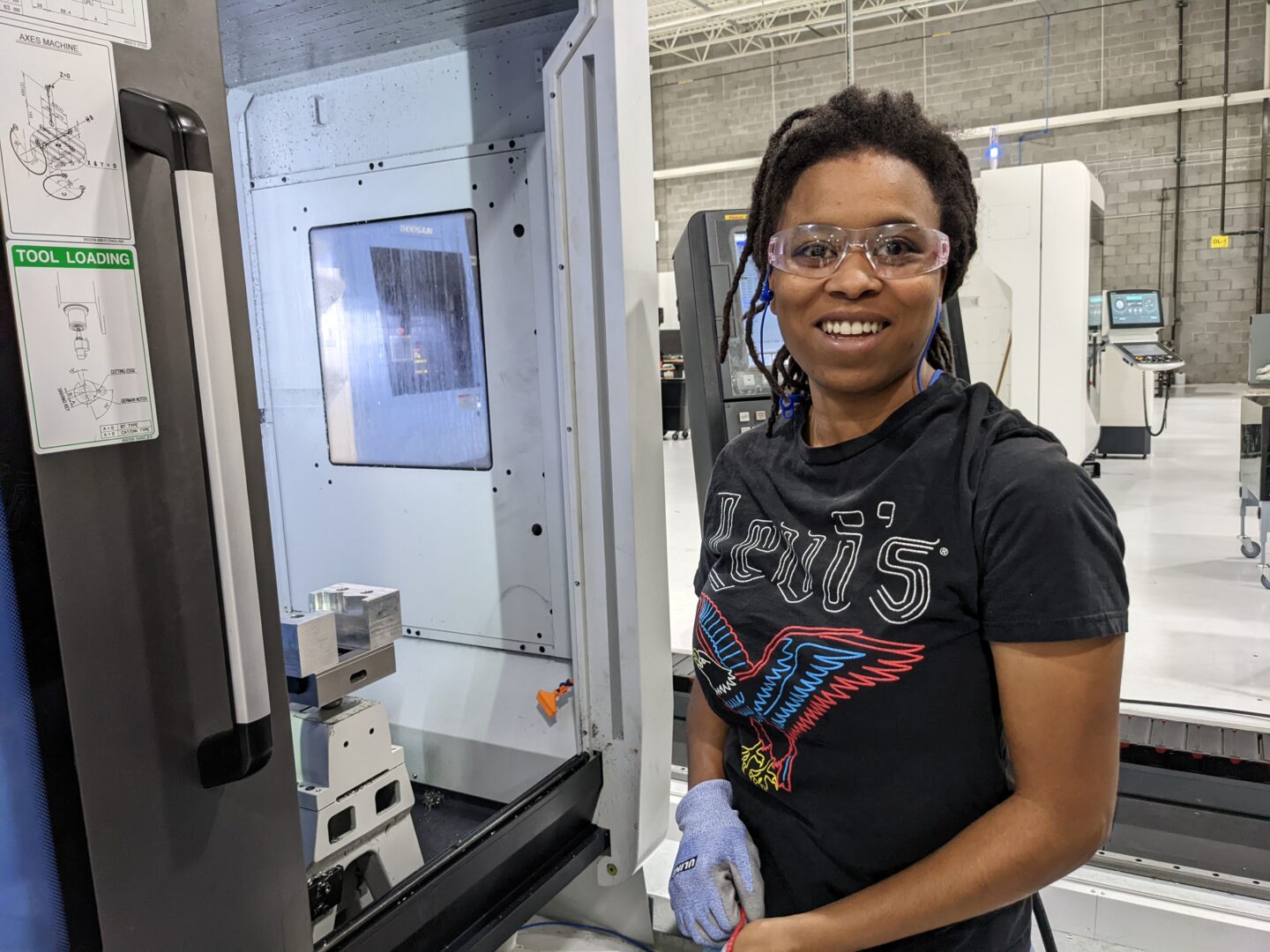 Kelsey Brown is employed as an operations specialist at Formlogic, a manufacturing startup in Lawrenceville that seeks to automate the work of skilled machinists. Brown previously held a series of jobs in the service industry, but Formlogic hired her in May to load and monitor factory equipment. Her work helps the company to gather data to build its software.

In the five years he has worked as a machinist, Joe Dean has gained a window into one innovation for managing the mounting labor shortage at the nation’s factories.

He started as an apprentice at a traditional shop in upstate New York, where there was a clear chain of command.

“Any questions you had were deferred to your team leader. Team leader would then talk to [the general manager]. GM would talk to customers,” he said. “We never talked to anyone outside the company. It was like, nope, you don’t have an email address – you don’t need one.” 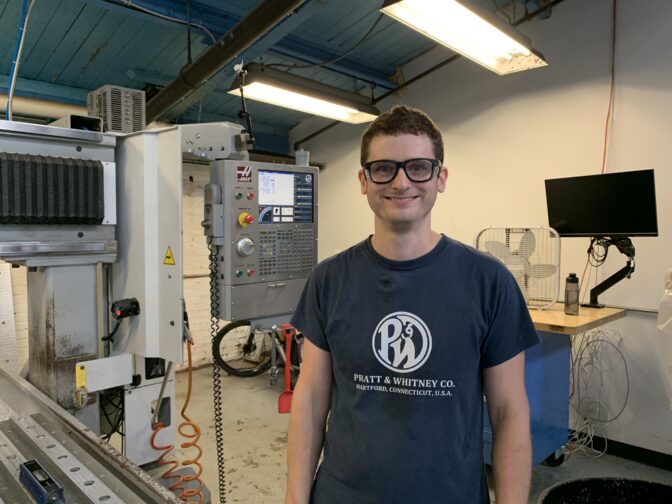 CNC machinist Joe Dean was hired at Conturo Prototyping after training as an apprentice for two years.

That division of labor disappeared when Dean began to work at Conturo Prototyping in North Point Breeze in 2019. Instead, each of the plant’s 10 machinists manages projects from start to finish, meaning they consult directly with customers and suppliers.

“I came here, and I got a cubicle and a desk. And I was like, ‘Holy cow, a machinist would never get a cubicle. This is so nice,’” Dean said of his first day working at Conturo.

He still spends a lot of time on the factory floor, making parts for space, autonomous vehicle and other high-tech companies. He programs computer numerical control machines that use a robotic arm to cut metal blocks into precise shapes.

“You get going [with the machine], and then you can answer a couple emails, start talking about the next job, order stock while the machine is doing all the work,” he said.

Company owner and president John Conturo structured his shop with this outcome in mind. He said it optimizes each employee’s productivity.

“A lot of our competitors, to set up one of these jobs [to make parts], would take a couple of weeks because they have to pass it through all these people, whereas here we could do it in a matter of days just because one person’s working on it,” he said. 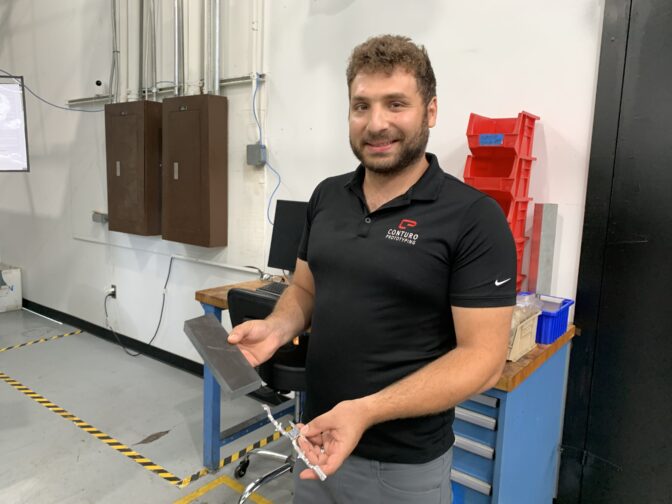 Conturo Prototyping owner and president John Conturo holds a steel block and the part it will be used to make.

Matt Verlinich advises startups and factories throughout southwestern Pennsylvania as manufacturing program associate at Innovation Works, based in the North Side. He said the agility of Conturo’s business model stands out. But he notes it still relies on labor at a time when plants are struggling with hiring as Baby Boomers continue to age and retire.

“You still have to find, train, onboard, retain an individual human for every particular task that you’re attempting to scale,” he said. “Whereas, if you can train an algorithm to do that, it is infinitely scalable provided that you can continue to provide more machines.”

Artificial intelligence has a long way to go — possibly decades — before it can completely replace machinists. But a startup in Lawrenceville is trying. Paul Sutter founded Formlogic about three years ago.

“The shortage in this industry is [driven by a lack of] skilled machinists … within driving distance,” he said. “Whereas for us, we have the skilled machinists [who] can work mostly remotely and do their programming and [plan] out how the parts are going to run. And then they submit them to us, and our software helps us [make] these parts on site unattended.”

While some of these steps take place as far away as Australia and Europe, Formlogic still needs people in its plant along the Allegheny River.

Inside, the space is brightly lit and uncluttered. A couple of dozen machines, just like those at Conturo Prototyping, are lined up in neat rows. 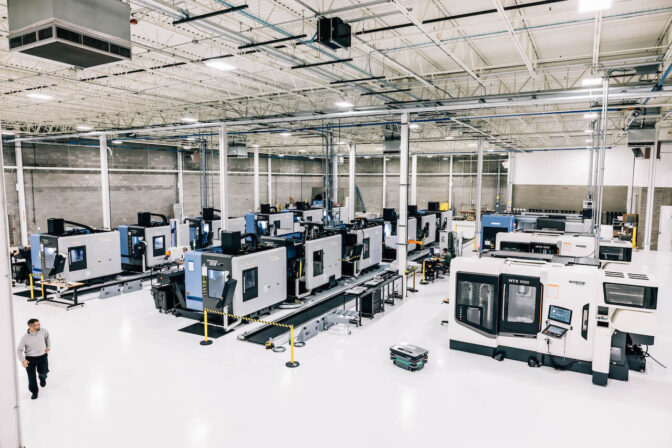 As part of its $35 million in funding, Formlogic received direct vendor financing from machine makers based in Japan and Germany.

Kelsey Brown is one of roughly 20 operations specialists who tend to the equipment in person. Before getting this job in May, she mainly worked in the service industry.

“I tried security. I tried cleaning. I just tried different things. And I’m like, I think I’m ready to move on to something more hands-on because that’s what I like to do,” she remembered.

Although she has completed a machinist training program, she is not employed as a machinist at Formlogic. Rather, she monitors several machines from the floor in case problems arise. She said it’s easy to notice when things go wrong.

“It’ll sound funny,” she said during a shift earlier this month. “Nothing has been sounding funny at all today, so that’s good — that’s really good. But if it starts sounding funny or it gets loud, you want to come over and check it.”

Then depending on what she finds, Brown calls a machinist off site, who can program any necessary adjustments. That process usually takes less than an hour. But Matt Verlinich at Innovation Works said that lag doesn’t exist at factories where machinists are physically present, spotting problems for themselves and tweaking their code right away.

“They also have to understand the limitations of many different types of pieces of equipment and what type of geometries they can produce, as well as what types of degrees of precision they can produce. And each individual part is very nuanced in how it can be made,” he said.

Formlogic’s artificial intelligence system still needs to learn and refine all of this knowledge. So, it must constantly gather data to improve its software. 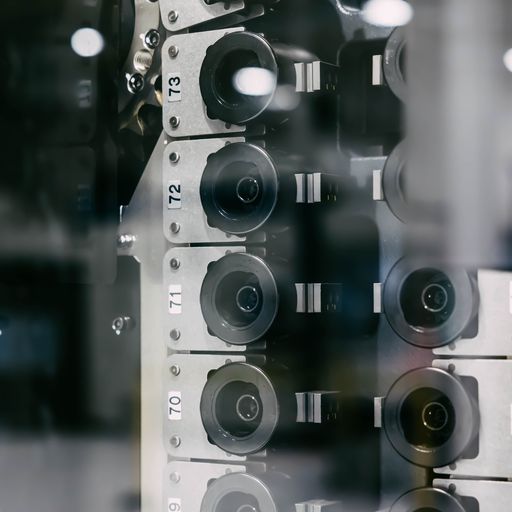 Each machine at Formlogic holds a carousel of between 50 and 80 tools for cutting metal blocks into complex parts.

A video on Formlogic’s website illustrates the company’s vision: a plant devoid of workers. An animated scene shows a production floor full of machines drilling parts without human operators present. Robots glide between the machines, ready to load and unload materials.

The idea has drawn substantial financial backing. Formlogic reports on its website that it has raised $35 million. Venture capital firms in New York City and San Francisco are the lead investors, and machine makers based in Japan and Germany have provided vendor financing.

“I just kept … asking myself, ‘Why am I working in advertising with such brilliant people?’ So, I wanted to work on something more consequential, use similar techniques, but apply it to something more real,” he said of his decision to create Formlogic.

He decided to move the company to Pittsburgh, given the city’s affordability and its concentration of manufacturing and robotics expertise.

Formlogic began with three machines at a facility in Robinson Township, Sutter said. But today, it houses 23 machines at its 50,000-square-foot plant in Lawrenceville. Sutter said it will grow to 300 machines after its next round of financing.

The company primarily serves the space industry, but Sutter expects it will eventually add medical parts and semiconductors to its product line.

In total, the startup employs about 55 people. Its 20 production-floor workers earn between $20 and $30 per hour, Sutter said. 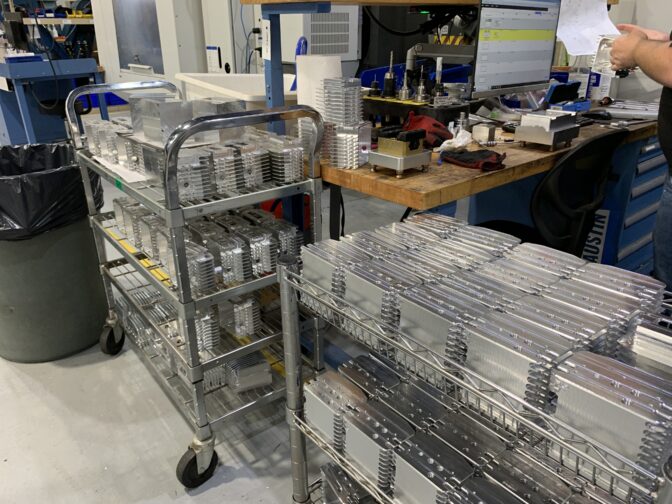 For a project for an international retailer, Conturo Prototyping manufactures housings for motors that are used in robotic arms at warehouses.

Meanwhile, Conturo Prototyping in North Point Breeze pays its machinists between $18 and $36 per hour, according to owner John Conturo. Like Formlogic, the six-year-old company hires people with varying education and employment histories. Some machinists arrive with high school diplomas, while others have completed bachelor’s degrees in engineering.

“We find very nontraditional people, and we make them into machinists with on-the-job training,” Conturo said. “So we have really good processes internally for how we train people, especially newer people who don’t have as much experience, and get them up to the level we need them to produce the parts that we make.”

By contrast, the company has reduced its need for office staff by developing its own software for preparing quotes, sending invoices, and managing workflow. It continues to incorporate new robotic tools into its manufacturing process.

Still, the business hopes to lean more heavily into workforce development with a move to the Greater Pittsburgh Coliseum, which once was a streetcar barn in Homewood. It has applied to the Pittsburgh Urban Redevelopment Authority to establish a vocational school at the site, along with a machine shop that Conturo said would double the shop’s staff.

So, even if the future of manufacturing lies in artificial intelligence, Conturo Prototyping remains competitive with its focus on cross-training workers.

But, it’s unclear how long that strategy will win out.

“If you ask ten different experts, you’ll get ten different perspectives on what that timescale is,” Innovation Works’ Verlinich said. But, “in the grand scheme of things in the very long run, yes, [machining] is a process that can be automated.”